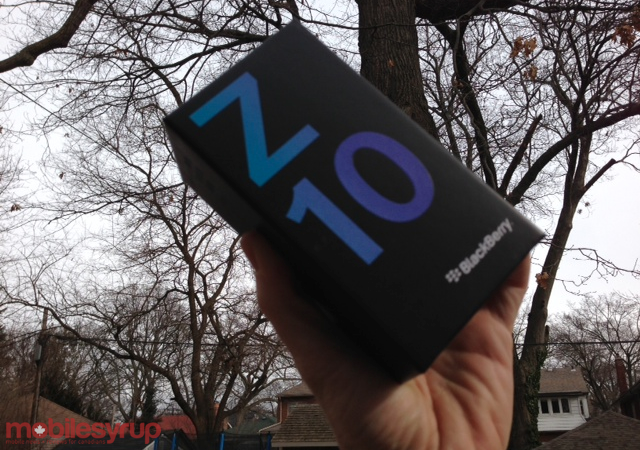 Update: This contest is now closed. The winner of the new BlackBerry Z10 is Twitter follower Maxime Tremblay. If this is not you, then again, no worries. We will have yet another BlackBerry Z10 contest coming up shortly – this time a White version. In addition, you can always enter your name in for the Nokia Lumia 920 in white here.
___
Want the new BlackBerry Z10? We have in our possession a TELUS Z10 in black and this new BlackBerry 10 OS can be yours. If you’re somehow unfamiliar with the new BlackBerry, a refresher of specs: 4.2-inch display with a resolution of 1280×768, 1.5Ghz dual-core processor, 2GB RAM, 8MP camera that captures 1080p HD videos, and an 1800mAh battery.

All you have to do to enter this contest is either follow us and re-tweet this contest on Twitter (@mobilesyrup), “Like Us” on Facebook (Facebook.com/MobileSyrup), or join us on Google+. All current Facebook, Twitter, Forum members, and Google+ followers are automatically entered. This contest closes on February 19th and we’ll announce a winner shortly after!

Since this is a TELUS device and the Z10 is a new OS, the winner (or any TELUS customer) can get a bit more education from one of their in-store Learning Centres, or catch one of their live video streams on Google+ or YouTube. In addition, check our our review here.

Good Luck to all who enter!