OK people, here we go. We’ve had a quick hands-on with the Galaxy Note II, and it’s a beauty. It’s big, but not overly so. It’s bright and powerful and immense.

Samsung threw a lavish party last night in New York for its Galaxy Note II, and while the phone has already been announced and shown off, it was another opportunity to spend some quality time with the phablet. Unlike the original, the Galaxy Note II feels more akin to a phone than a tablet. This is mainly owed to the 16:9 aspect ratio, and the more-than-passing resemblance to the Galaxy S III. In fact, the Galaxy Note II hews so closely to its 4.8-inch cousin that at first glance it’s hard to tell them apart.

But there are a significant number of differences, and they will be apparent once we review the device. Keep in mind that the Galaxy Note II is Canada’s first phone shipping with Jelly Bean, as it comes with Android 4.1.1 out of the box. It’s a large smartphone — or small tablet, depending on your definition — and speaks to the sizeable number of users who are fed up with lugging around a phone, tablet and laptop everywhere they go. 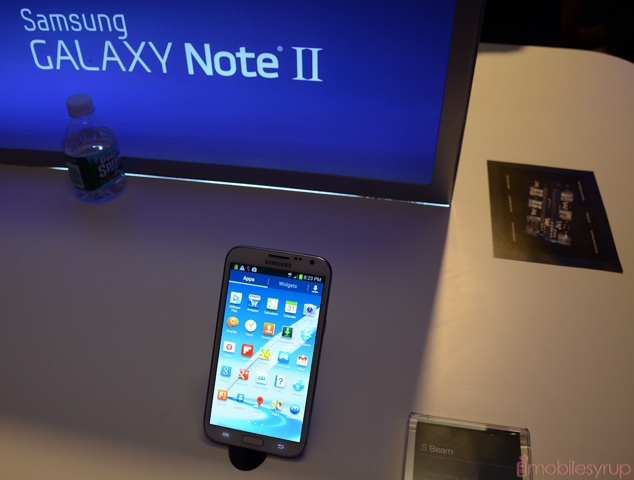 The Galaxy Note II is powerful; it comes with a 1.6Ghz quad-core Exynos processor, 2GB RAM and LTE connectivity. At its core, it is a smartphone with tablet proclivities; that means its S Pen is featured prominently in its marketing materials, but it’s not necessarily going to be the selling point.

It’s 720p screen is much clearer than the PenTile-powered Galaxy S III, and if you’ve ever seen once it’s the first thing you notice. It’s gorgeous, and in towers over its smaller cousin despite the lower pixel density. It’s clearer, sharper and more vivid, and I can’t wait to use it in the real world. 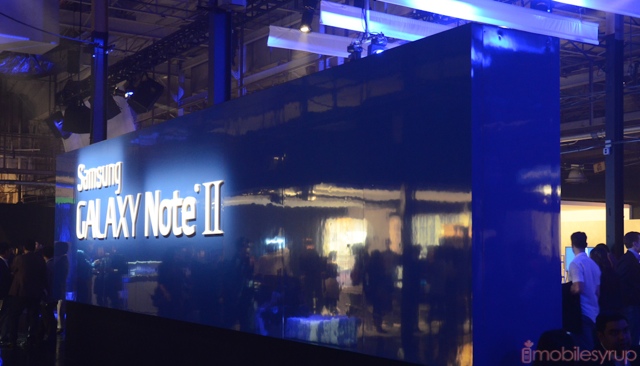 Ultimately, you can keep this in mind while we finish up our review: the Galaxy Note II is completely unique, despite its clear lineage. It’s going to be a very popular device in Canada, and with a cross-carrier marketing push, Samsung is prepared to spend the money to make its inventiveness known.