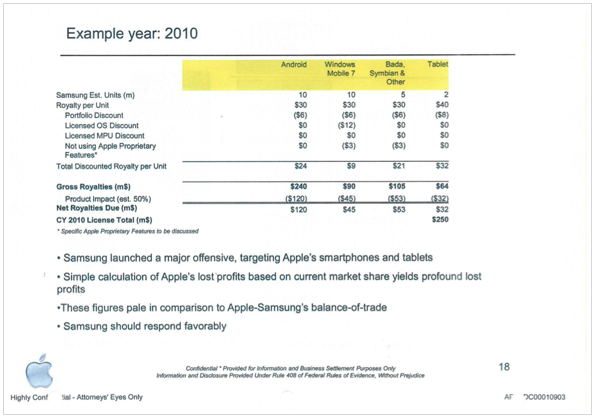 The Apple v. Samsung lawsuit is nothing short of fascinating. Over the past few weeks we’ve seen old prototype designs of both the iPhone and iPad, upcoming Samsung tablet models, plus complete sales volumes for specific devices. All these were once incredibly private details, but now thanks to some patent infringement claims the information is commonly known.

The latest court details to surface are from October 2010 when Apple apparently asked Samsung to license their patents for a fee. The terms showed upwards of $30 per touchscreen smartphone and $40 per tablet for every Windows Phone, Android, Bada, Symbian, etc. Since Samsung is a major supplier to Apple the agreement was on a sliding scale and would decrease over time. In addition, the document presented showed other discounts, such as cross-licensing Samsung’s patents would be 20% reduction; devices with physical QWERTY handsets would score another 20% discount; phones that already have a licence agreement with Microsoft’s Windows Mobile would continue the reduction by another 40%.

It seemed like there was some potential to come to an agreement. Apple thought “Samsung should respond favorably” to the terms. According to the court doc Apple suggested the licensing deal would have possibly cost Samsung $250 million in 2010.

Clearly talks failed and the battle continues. Apple is currently seeking over $2.5 billion in damages from Samsung. The full court doc is below.