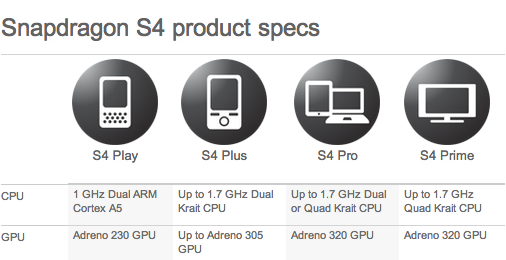 Microsoft has announced its hardware partners for the first Windows Phone 8 push, and in addition to four vendors coming out with phones — HTC, Samsung, Huawei and Nokia — they will continue their relationship with Qualcomm.

But instead of being limited to single-core processors based on Qualcomm’s Snapdragon S1 and S2 chipsets, upcoming devices will have access to multi-core processors that Microsoft will take advantage of in both CPU- and GPU-intensive tasks. High-resolution screens and 3D games are also in the cards, and for that Microsoft has partnered again with Qualcomm to bring their S4 chips to hardware partners.

Specifically, variants of the MSM8960 SoC will be included in the devices, including the Snapdragon S4 Pro with a next-generation Adreno 305 GPU. Leaked HTC roadmaps of their upcoming WP8 devices include, at the top-end, a 4.7-inch device with a MSM8960 processor, similar to the Android-powered One X, while the mid-range product will use the older MSM8660.