RBC Capital Markets has published a report to their clients that gives a brief insight into the expected Q4 2010 and year end wireless subscriber numbers (Rogers, Bell and TELUS will all be announcing results next week).

In the report RBC Capital Markets analyst Jonathan Allen stated that the busy Q4 holiday period was a “Fierce Quarter For Wireless Competition Among New Entrants.” and that they “are poised to add 210k subs this quarter (34% of total share)”. So the Q4 new entrant subscriber breakdown is estimated to be as follows: Wind Mobile 85,000; Videotron 40,000; Mobilicity 60,000 and Public Mobile 25,000. Project these results to the 2010 year shows that Wind Mobile has 225,000 subscribers. Videotron with 135,000, Mobilicity 94,000 and Public with 59,000.

Probably the most significant growth is Mobilicity. They were coasting for a few months in only one city (Toronto), then launched in Edmonton, Vancouver and Ottawa within the last remaining weeks of 2010. If these numbers are true then they increased their subscriber base by almost 64% in a few short weeks. Very impressive.

As for the Rogers, Bell and TELUS, RBC believes their market share will drop 2% in the quarter but overall will increase on the year to scoop up over 23.3 million subscribers. Another note of interest it the 8.2% wireless growth over the 2009 year to a total of 24,831,000 subscribers. (Full chart after the break) 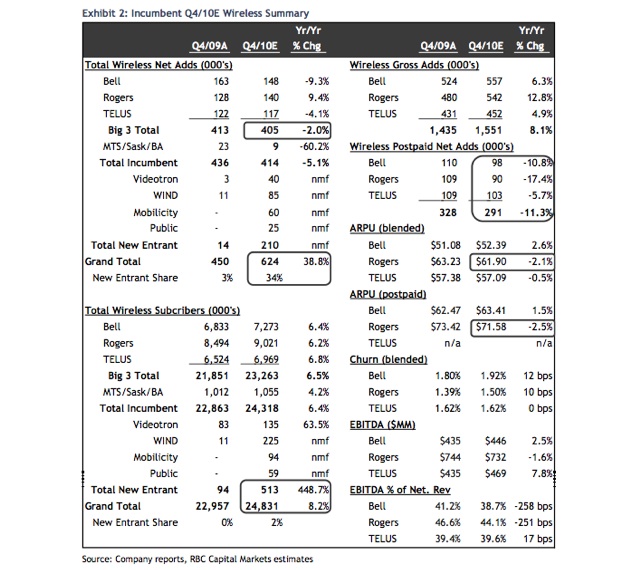 WSJ: Apple plans to sell 25 million new iPhones by the end of the year