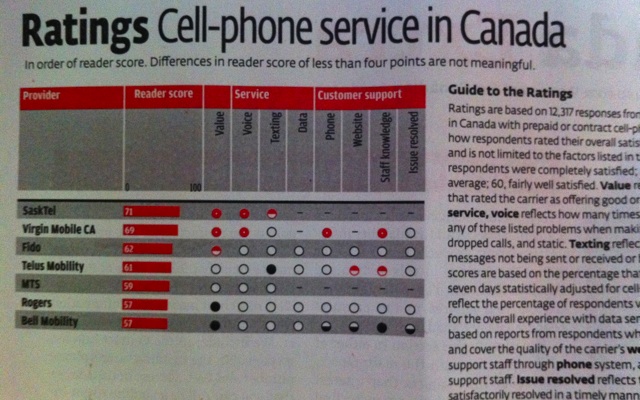 In the January 2011 issue of the Consumer Reports they give a good breakdown of different cellphones – mostly based for models in the United States. However, they have compiled a list of the Canadian cellphone carriers. Ratings are based on 12,317 Canadian responses (combined of prepaid and postpaid) with the categories of overall value, services (voice, texting, data) and consumer support (phone, website, staff knowledge and issue resolved). Here are the results:

Based out of 100, SaskTel came up on top with an overall reader satisfaction with 71. Virgin came in next with 69 and Rogers and Bell tied for last place with 57. In regards to overall value – SaskTel and Virgin again came out on top and deja vu happened with Rogers and Bell at the bottom. For some reason none of the new entrants are even listed on the poll. Overall it looks like Virgin Fido and TELUS generally have a clean slate. Ironically, Bell scored fair or poor in most categories and their goal is “to be recognized by customers as Canada’s leading communications company”.

So what do you think… is this an accurate representation of the carriers listed?