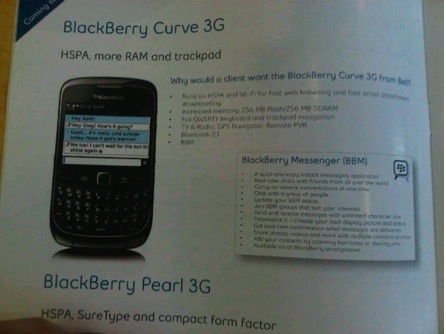 Bell has put the familiar “coming soon” on the upcoming BlackBerry Curve 9300. This will be called the Curve 3G and there’s no release date or pricing but as you can see in the flyer it’ll work on their HSPA network, have increased memory of 256MB flash/256MB SDRAM, the new trackpad, QWERTY keyboard, Bluetooth 2.1 and BlackBerry Messenger.

Update: Thanks to a tipster for letting us know that the date is set for August 12th.