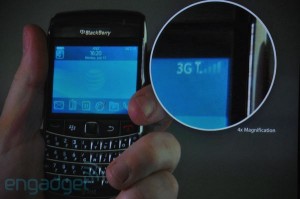 Apple held their iPhone 4 antenna press conference and stated that other manufacturers such as Nokia, Motorola, HTC and RIM devices have the same “Antennagate” problem where the signal slowly disappears. Apple went as far as showing examples of each.

Well our homegrown Waterloo-based Research in Motion is fighting back! Thanks to Kevin over at CrackBerry for the official statement by co-CEO’s Mike Lazaridis and Jim Balsillie. Read it below… it’s bold and to the point:

“Apple’s attempt to draw RIM into Apple’s self-made debacle is unacceptable. Apple’s claims about RIM products appear to be deliberate attempts to distort the public’s understanding of an antenna design issue and to deflect attention from Apple’s difficult situation. RIM is a global leader in antenna design and has been successfully designing industry-leading wireless data products with efficient and effective radio performance for over 20 years. During that time, RIM has avoided designs like the one Apple used in the iPhone 4 and instead has used innovative designs which reduce the risk for dropped calls, especially in areas of lower coverage. One thing is for certain, RIM’s customers don’t need to use a case for their BlackBerry smartphone to maintain proper connectivity. Apple clearly made certain design decisions and it should take responsibility for these decisions rather than trying to draw RIM and others into a situation that relates specifically to Apple.”

TELUS to release the BlackBerry Bold 9900 in White