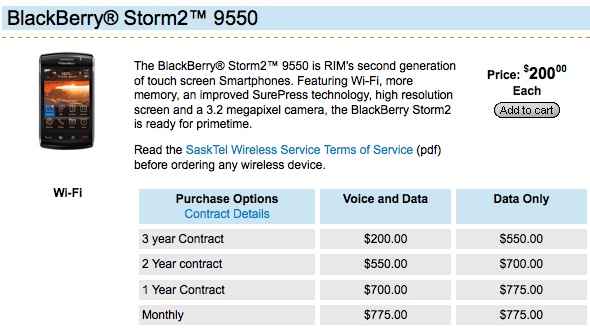 It was no secret that SaskTel was going to offer the BlackBerry Storm2 9550, it was just a matter of when and how much. Good news for those who are interested in getting a new touchscreen as they have just released the Storm2 on the following price plans:

This is hands down the best device SaskTel currently has – until the new iPhone comes their way. Specs of the Storm2 are that it comes with a 3.25-inch display (resolution of 480 X 360), WiFi, OS 5.0, 3.2 megapixel camera with flash and auto focus, 3.5mm headset jack, Speakerphone, virtual QWERTY keyboard, 2 GB Internal/256 MB Flash and can hold up to 16GB with a microSD card, full HTML browser, Speakerphone, GPS.

SaskTel releases OS 5.0.0.517 for the BlackBerry Storm2… a device they don’t offer yet