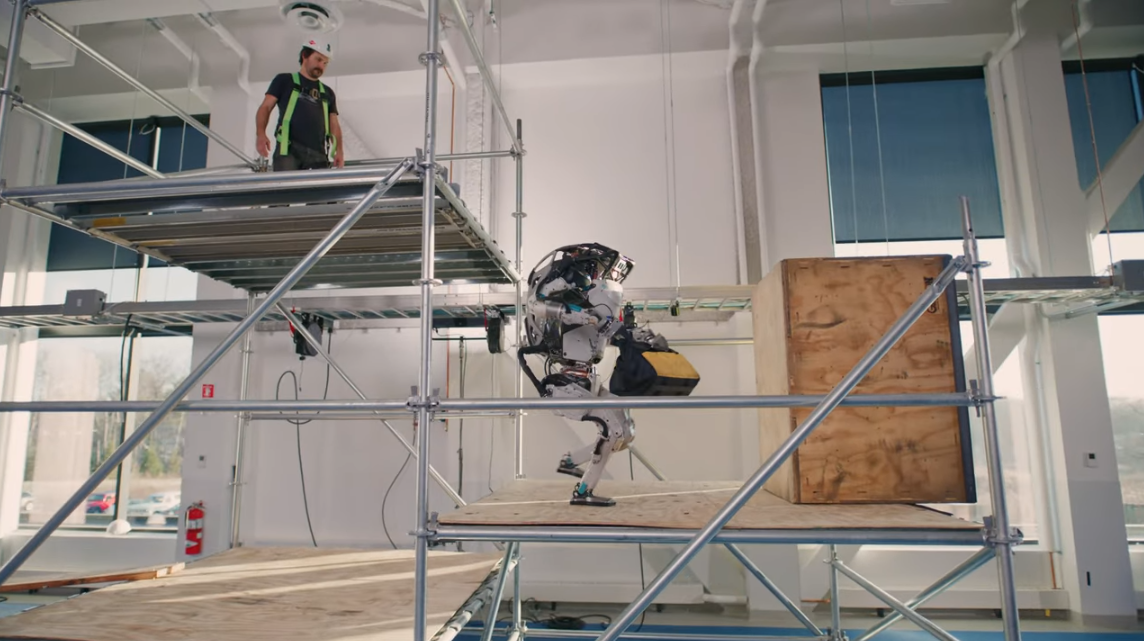 Hyundai-owned Boston Dynamics showed off their Atlas humanoid robots in action back in 2021. Back then, the robots were tasked with navigating a space of plywood panels, gaps, and beams, essentially performing parkour.

Now, the company has released another video titled “Atlas Gets a Grip” that shows the humanoid robot in a construction workplace scenario.

In the video, a construction worker is standing on top of construction beams, but realizes they forgot their toolbox underneath. Atlas springs into action swiftly, sets a way for it to climb up the beams, and tosses the toolbox toward the construction worker. In essence, the video shows Atlas’ ability to manipulate the world around it to suit its task and interact with objects to reach its goal, “pushing the limits of locomotion, sensing, and athleticism.”

The video also serves as a test and display of the robot’s capacity to keep its balance in different scenarios, which will ultimately help the company perfect the robots over time and reach levels of human dexterity.

According to a separate video where Boston Dynamics explains how its robots can interact with objects and the environment and how it develops new Atlas behaviours, Scott Kuindersma, the team leader behind Atlas said the new video is meant to “communicate an expansion of the research we’re doing on Atlas.”

“We’re not just thinking about how to make the robot move dynamically through its environment, like we did in Parkour and Dance,” said Kuindersma. “Now, we’re starting to put Atlas to work and think about how the robot should be able to perceive and manipulate objects in its environment.”

How does Atlas recognize and interact with objects? How do we develop new Atlas behaviors? Why is manipulation important for the future of robotics? Join our team in the lab to find out. https://t.co/Ukgm6B1j6Q

This is a display of the robot’s capabilities, and with further development, it shouldn’t be long before such robots can perform real, physically demanding jobs that might be unsafe for humans.

Elsewhere, Elon Musk believes his company’s Tesla Bot will soon eliminate the need for humans to do physical work. Musk sees the humanoid robot rolling out widely over the next decade, and says it’s positioned to replace humans doing dangerous, repetitive or boring work, including tasks like cooking, mowing lawns, and caring for the elderly.