And that's healthy for the market. 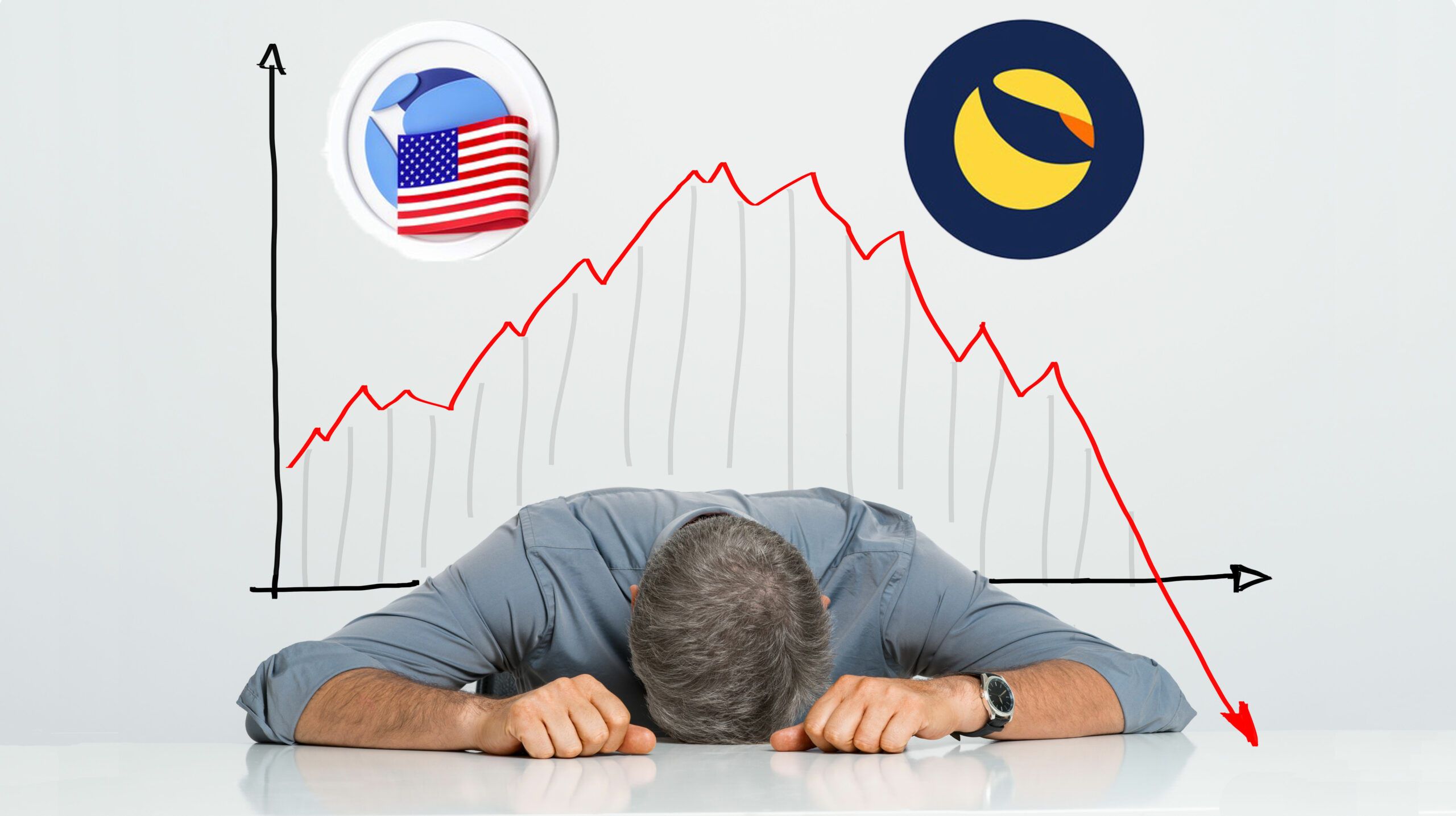 The recent Terra Luna and its $UST stablecoin debacle has left a sour taste in the cryptocurrency market. Over $40 billion in market cap has been wiped out in a week. But what exactly happened? And what can we expect moving forward?

$UST is Terra’s algorithmic stablecoin that was poised to stay pegged (a fixed exchange rate) 1:1 to the value of $1 USD. Note: the keyword here is algorithmic. While other centralized stablecoins like Tether’s $USDT and Circle’s $USDC have real-world assets to back its 1:1 peg, UST operated under a constant contract-based mint/burn mechanism that helped keep the value of $UST stable and keep the asset decentralized.

In simple words, one $UST could always be redeemed for $1 worth of $Luna, regardless of $UST’s peg at that moment. In case the peg fell below the $1 mark, ‘arbitrage traders‘ would step in, buy a bunch of $UST for its cheaper de-peged price, and exchange it for $Luna. This would burn the $UST token, decrease its overall supply (deflate) and drive its price back up. For example, if one $UST is currently valued at $0.98, and I buy 100 of it, I have $UST worth $98 USD, but if I exchange this $UST for $Luna, I’d get $100 worth of $Luna, so I pocket the extra $2. When done at a larger scale, such arbitrage opportunities would help traders make quick ‘scalp profits,’ whereas the $UST 1:1 peg would be maintained due to the circulating supply of $UST decreasing.

As a backup, $Luna and $UST’s founders, the Luna Foundation Guard, and its CEO Do Kwon also established reserves of its own with more than $1.5 billion in Bitcoin ($BTC), with an overarching goal to stack over $10 billion in $BTC in the future. In a perfect world, if $UST would ever severely de-peg, Luna Foundation Guard would sell some of its $BTC holding to buyback $UST in an attempt to bring it back to its $1 peg value. Well, at least that’s what the foundation had planned.

Cryptocurrency markets are volatile, and people use stablecoins to maintain their purchasing power. For example, let’s say I bought one $BTC when it was valued at $10,000 USD, and it reaches the $40,000 mark. I could sell all my $BTC holdings and convert them into one of the stablecoins mentioned above, like $USDT, $USDC or $UST. Doing so is expected to be equal to holding real-world fiat currency where your capital doesn’t go up and down with the market swings. This was the case with $UST, until it collapsed, and in just a week, thousands of people globally lost whatever they put in, while some were able to salvage whatever was left.

For starters, the economic backdrop hasn’t been pretty lately. Inflation in Canada and the United States is the highest it has been in the past 30 years. And considering that the majority of the world conducts its trades, including supply chain, in USD, any monetary change that is ‘hawkish’ rings alarms globally. Inflated gas prices stemming from the Russia/Ukraine conflict work hand-in-hand to increase the cost of daily necessities, considering that everything from fruits and cereal to diapers and clothing need to be produced and shipped around globally.

The U.S. Federal Reserve (FED) has been vocal about the high inflation brought about by relentless money printing during the height of COVID-19. To bring inflation down, the FED has been increasing interest rates that discourage borrowing and encourage consumer saving. This, in turn, results in low economic growth, low consumer spending and low demand for services and goods.
Low demand for services and goods causes companies to decrease the prices of whatever service or commodity they offer, in a bid to attract consumers back. This, in turn, brings inflation down and keeps it in check.

That being said, historically, whenever the FED has increased interest rates, the traditional stock markets plummet, especially the growth and tech stocks and composites, most notably the S&P 500 and Nasdaq. $BTC, and the overall cryptocurrency market is tightly correlated with tech stocks (even though $BTC was created to act as a hedge against inflation), and hence, when composites like Nasdaq go down, $BTC follows suit. When $BTC goes down, the rest of the cryptocurrency market follows suit.

Due to this hawkish behaviour from the FED, markets globally have been uncertain since November 2021. Uncertainty leads people to go into risk-off mode, and that’s when reliable assets like gold flourish.

Pair that with the recent unprovoked invasion of Ukraine by Russia, and we have a ‘Black Swan Event’ in the making.

What led to the collapse?

In short, an entity with billions of UST decided to market dump their stablecoin on Monday, May 9th, which triggered the UST peg, and it fell down to about $0.61 cents. Naturally, anyone holding UST thinking that their capital is safe just watched 39 percent of their stablecoin portfolio vanish in thin air, and it caused a ‘bank run.’

UST holders sprawled to salvage whatever was left of their portfolio, considering that Bitcoin has also experienced a 50 percent drawdown in price since all-time high, panic was in the air. Users started withdrawing their money with a minus 40 percent cut, and some used arbitrage to exchange UST for Luna, and then market selling Luna (as referenced above).

The Luna Foundation Guard rushed to sell billions of its $BTC holdings to secure funds to buy back $UST, in an attempt to re-peg it. This added further selling pressure on $BTC, resulting in a further drawdown in its price, which correlated with more people selling their $Luna and $UST in panic.

This caused hyperinflation for $Luna, which means, new $Luna tokens were being minted at record speed, and its overall supply was increasing. With increased supply, and people market selling $Luna (lack of demand), the digital asset entered what ‘crypto bros’ call the ‘death spiral.’ $Luna’s total supply went from roughly 725 million tokens on May 5th to roughly 6.9 trillion as of now. Since then, $Luna and $UST holders (the ones who didn’t panic sell when the assets started tanking) have been right out decimated. 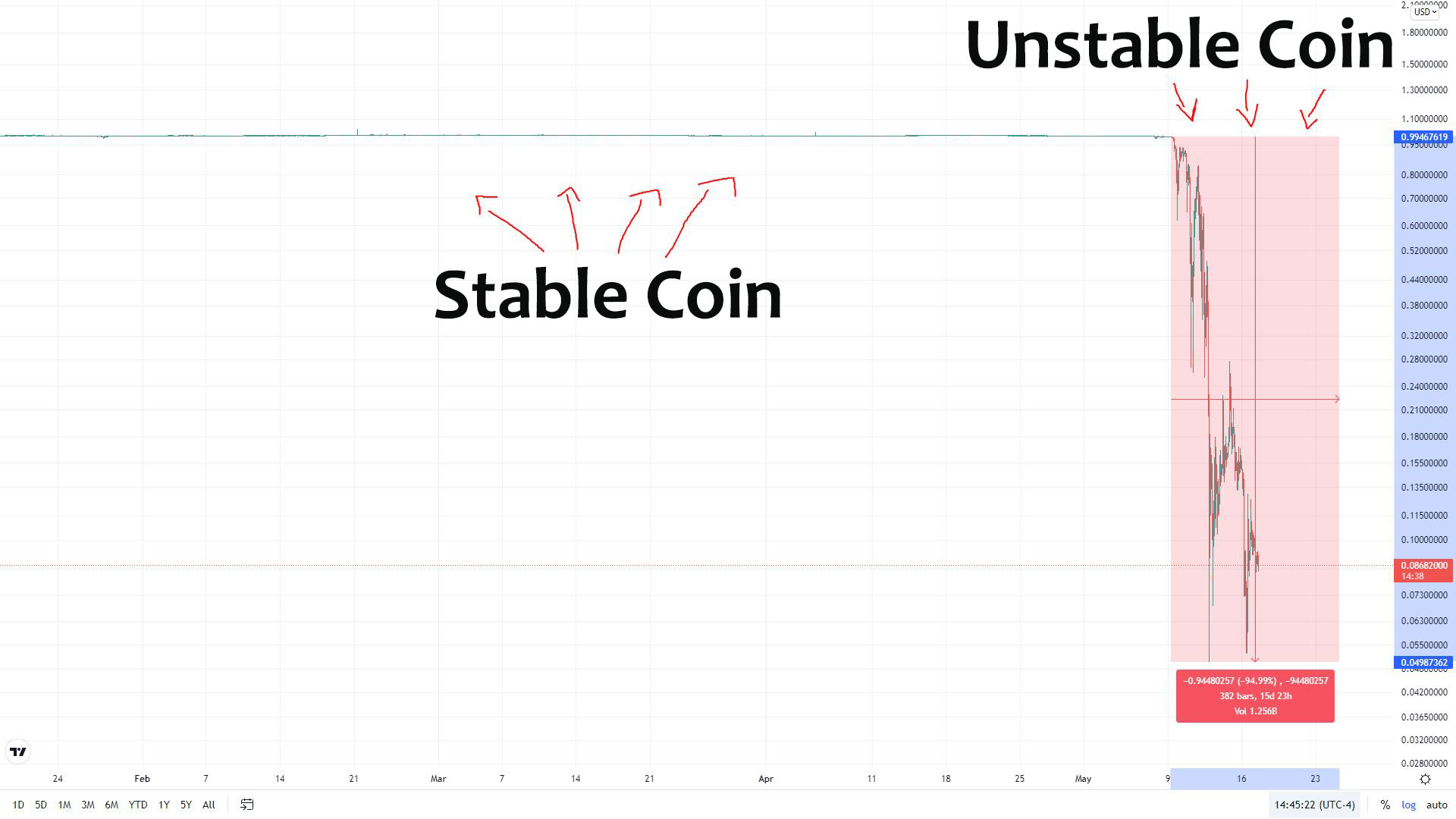 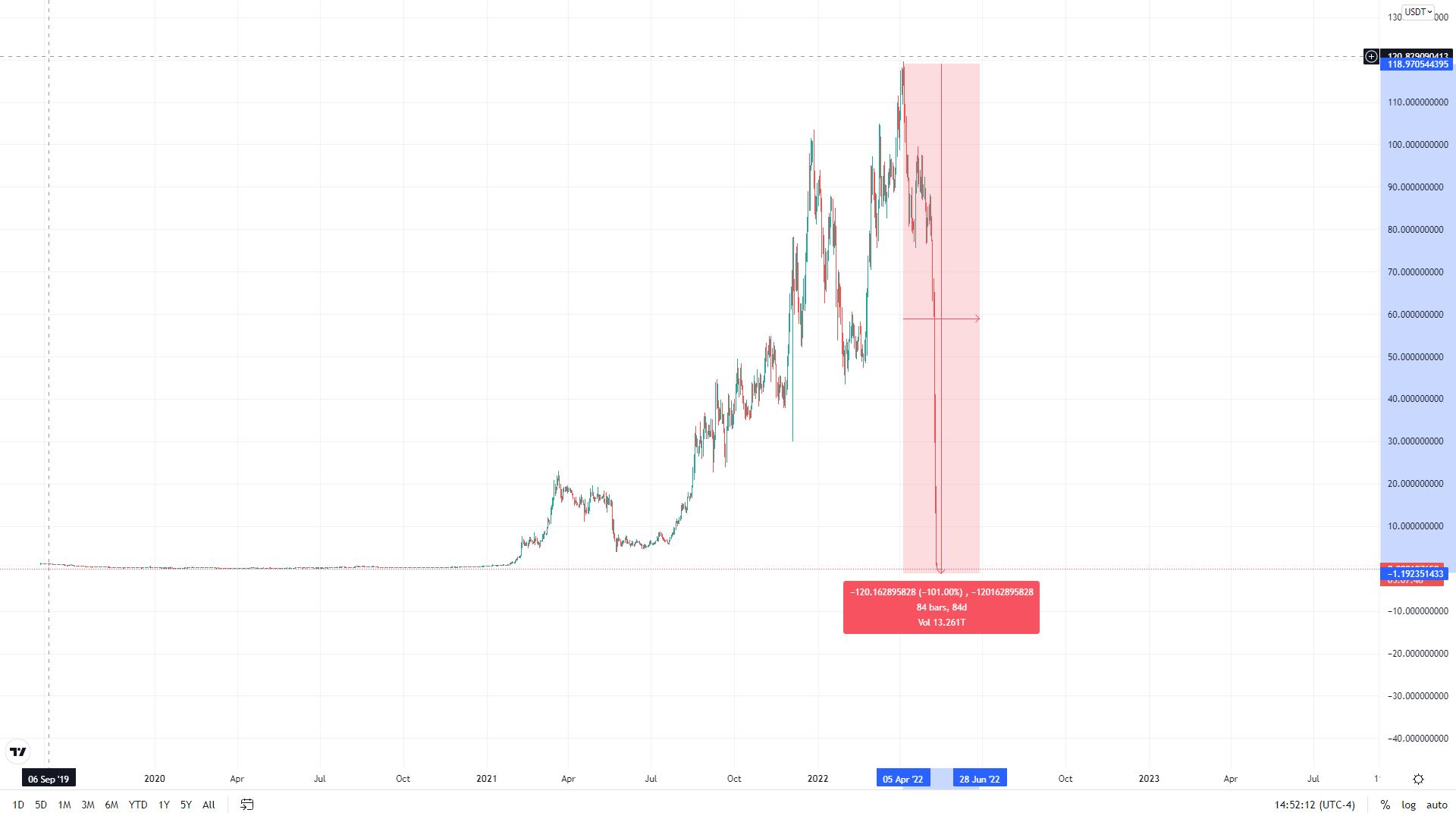 $UST now sits at about eight cents apiece, whereas $Luna, which has been obliterated due to hyperinflation of its supply now sits at about 0.00018 per coin, after having reached its all-time high of $120 apiece just last month. Undoubtedly, people who invested in $Luna and didn’t withdraw when it started to crash have lost it all, whereas those who, for example, held $1 million in $UST last week would have about $80,000 left, as of writing.

In this case, the mechanism that goes behind maintaining the 1:1 peg worked perfectly, but also served as a trigger for self-destruction.

Looking out for tomorrow

The U.S. Federal Reserve stability report from May 9th talks about stablecoins, and their vulnerability in detail. “Stablecoins typically aim to be convertible, at par, to dollars, but they are backed by assets that may lose value or become illiquid during stress; hence, they face redemption risks similar to those of prime and tax-exempt MMFs,” reads the report. “These vulnerabilities may be exacerbated by a lack of transparency regarding the riskiness and liquidity of assets backing stablecoins. Additionally, the increasing use of stablecoins to meet margin requirements for levered trading in other cryptocurrencies may amplify volatility in demand for stablecoins and heighten redemption risks. 19 The President’s Working Group on Financial Markets, the Federal Deposit Insurance Corporation, and the Office of the Comptroller of the Currency have made recommendations to address prudential risks posed by stablecoins.”

Stablecoins, like in the rest of the world, are unregulated in Canada, though that is unlikely to continue after what has unfolded.

During her annual testimony before the Senate Banking Committee, US Treasury Secretary Janet Yellen pushed for regulation of stablecoins, and the crypto sector in general, saying “With respect to digital assets, new products and technologies may present opportunities to promote innovation and increase efficiencies. However, digital assets may pose risks to the financial system, and increased and coordinated regulatory attention is necessary. On March 9, 2022, President Biden signed an Executive Order calling for comprehensive approach to digital asset policy. The Council is drafting a report that will identify financial stability risks and regulatory gaps. I look forward to working with you on the issues and opportunities posed by digital assets. We are also eager to work with you to ensure that payment stablecoins and their arrangements are subject to a federal prudential framework on a consistent and comprehensive basis.”

Undoubtedly, CBDCs (Central Bank Digital Currencies) are what’s coming next, and some banks in Canada, including the Bank of Canada, have already started exploring the idea. While ‘crypto bros’ deny the need for regulations, the truth is that the sector will only grow to its full potential with some kinds of regulations in place that protect investors, and large-scale adoption will only happen when uncertainty around these digital assets is gone for good.