"I also personally would love to smash the Gardiner and all the high-rise condos in this city..." 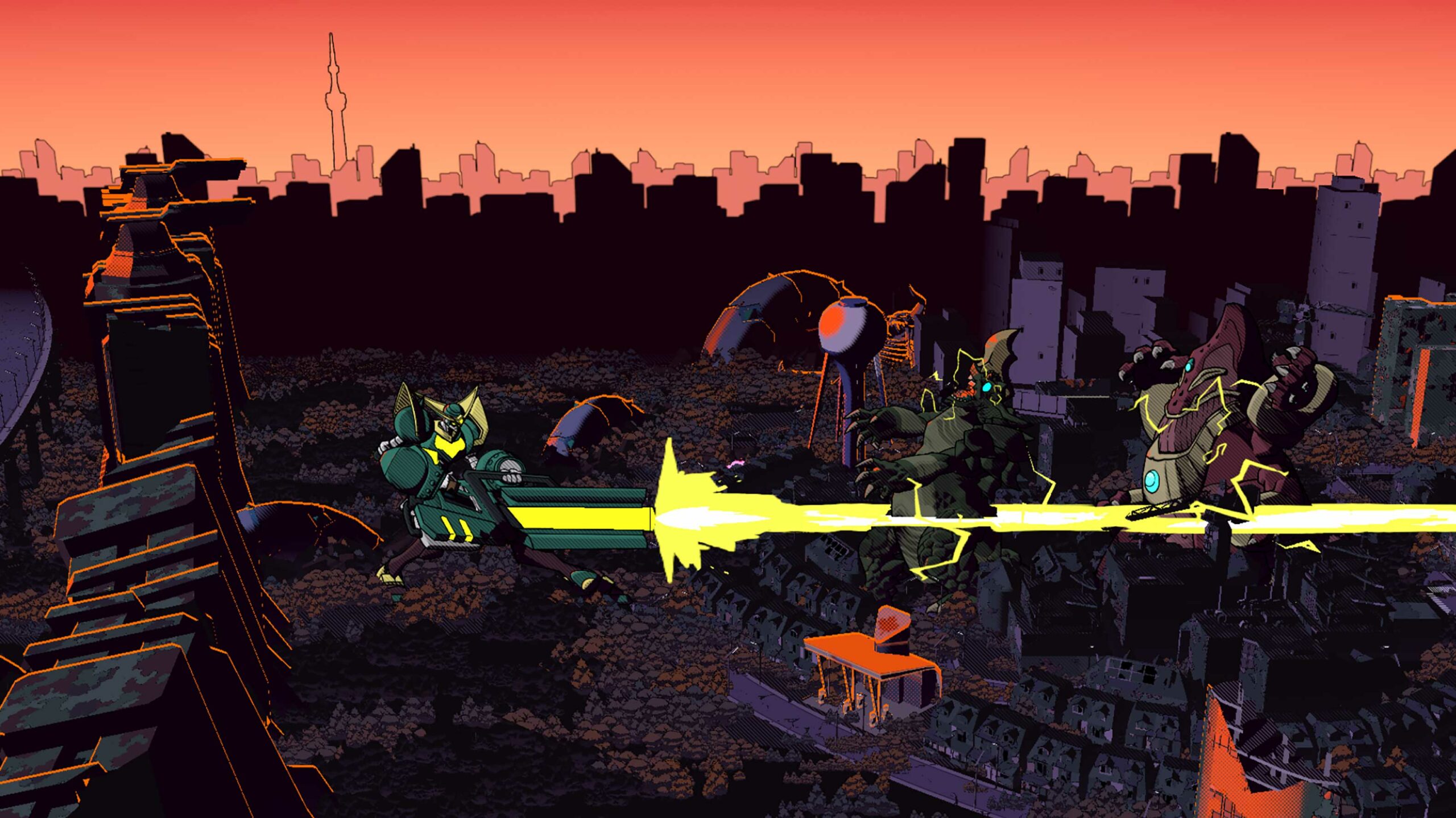 Last month, Toronto-based indie developer 13AM Games released Dawn of the Monsters, an action game in which players assume the role of various hulking behemoths to beat up other fearsome creatures.

For Alex Rushdy, it’s also something of a dream come true. As the co-founder, CEO and creative director of 13AM, Dawn of the Monsters is a chance to finally make a game based on kaiju, the Japanese genre of film and television featuring giant monsters.

“I’m a huge kaiju nerd, and I have been since I was a wee child,” Rushdy admits. He says this all started when his babysitter took him to Zellers when he was around five-years-old. Rushdy, an avid fan of dinosaurs, soon came across something that caught his eye.

“I saw a dinosaur that I couldn’t name. I had an encyclopedic knowledge of dinosaurs, and I was like ‘What is this dinosaur? Why don’t I know this dinosaur’s name?’ And my babysitter, Sharon, told me ‘that’s not a dinosaur, that’s Godzilla.’ Then my mind was just blown that there was a dinosaur that was that big and powerful that lived on Monster Island with other creatures. So she got me that toy and it still sits on my desk to remind me of that.” 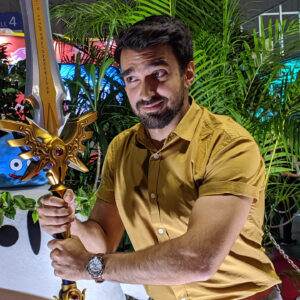 Fast forward a few decades — including early years with the Game Boy, SNES and Sega Genesis and, later, time in the film and video production space — and Rushdy eventually enrolled in a post-grad game design program at Toronto’s George Brown College.

“I always loved gaming, but I never really considered a career path because I don’t like math,” he explains. “I didn’t want to learn how to program — I’m more of a creative mind than a mathematical mind. And then I found out that you don’t need to be a programmer to work in video games — you can do design, you can do art, you can do all these other things.”

At George Brown, he met 13AM’s other co-founders, and the rest, as they say, is history. The team went on to make two games, 2015 platformer-racer Runbow and 2019 action-platformer Double Cross, as well as publish Tokyo-based Dadako’s Pirate Pop Plus in 2018. All told, it’s an impressive start for the small Toronto upstart, but there was one project during all of this that hadn’t gotten realized.

“We had come up with a prototype for a giant monster fighting game, years and years ago, and it never really went anywhere. We built a prototype, but we couldn’t really get it signed, so we put it on the back burner,” says Rushdy of the game that would eventually become Dawn of the Monsters. After Double Cross, the studio eventually revisited the concept with a fresh spin.

“We thought, ‘wouldn’t it be more interesting if it was a kaiju game mixed with a beat ’em up?’ Because that was like a chocolate-peanut butter combo that we thought, ‘why has no one made this? We could smash cities and other monsters with a friend of yours in co-op,'” he says. And when we started pitching that around, it was like almost instantly. People were excited about it because it was a really good fit.”

With a publisher secured, Rushdy says the team quickly got to brainstorming all sorts of design ideas. One, however, stood out in particular. Kaiju stories are often set in Japan or, in the case of the recent Godzilla movies, various parts of America. But what if we got one in Canada? 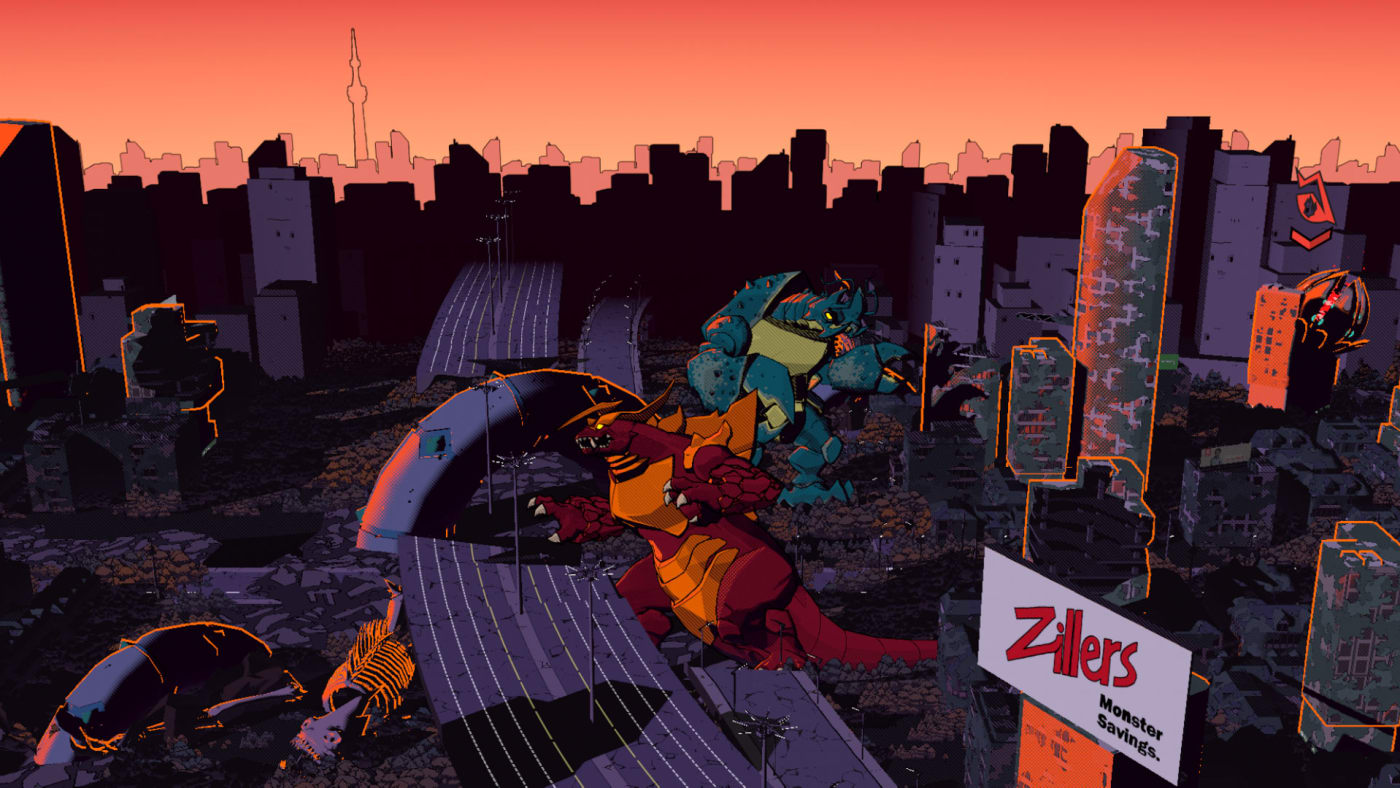 “Zillers” — now why does that sound familiar?

“Toronto so rarely plays itself in movies, because the big movies that get shot here are often are almost always foreign films, or almost always American films. And what they want is a cheap place to stand in for Philadelphia or New York City or Tokyo or whatever,” says Rushdy.

“And we were just like, ‘you know what? Let’s let Toronto be Toronto. We’re a Canadian studio, this is a Canadian game — we’re putting in Toronto, full stop, and that’s going to be the big city that you get started in, and that’s going to place you smash. I also personally would love to smash the Gardiner and all the high-rise condos in this city, so that allows me to do that. And the excitement that it got out of our team immediately was kind of what sealed it for us.”

Dawn of the Monsters‘ story, which focuses on the Defense Alliance Worldwide Network’s efforts to stop invading creatures known as the Nephilim, begins in “New Toronto,” one of the game’s four major locations. Within that setting, Rushy said the team had fun coming up with all kinds of Canadian easter eggs, ranging from iconography like the CN Tower and TTC to retailers like “Zillers” (Zellers) and “Tom Nortons” (Tim Hortons”) and even such groups as the now-defunct Concerned Children’s Advertisers. As a nice touch, the team also threw in easter eggs for fellow Toronto-made games, including DrinkBox’s Nobody Saves the World, Mighty Yell’s The Big Con and Capybara’s Grindstone.

“So we were just spitballing these ideas and laughing and we’re like ‘if we’re getting a kick out of this, other people will as well.’ and when we released our first trailer, we didn’t even really intentionally mention Toronto, but people caught it and they noticed and we were on BlogTO, we were on This Hour Has 22 Minutes,” Rushdy says. “People were mentioning, ‘oh, wow, there are so many little [easter eggs], like, oh, yeah, that looks like City Hall or there’s the CN Tower. There’s ‘Earnest Ted’s’ — we built Honest Ed’s in our game. People got a kick out of it and I love having that kind of connection to the audience where we actually build these games.”

From Toronto to Tokyo 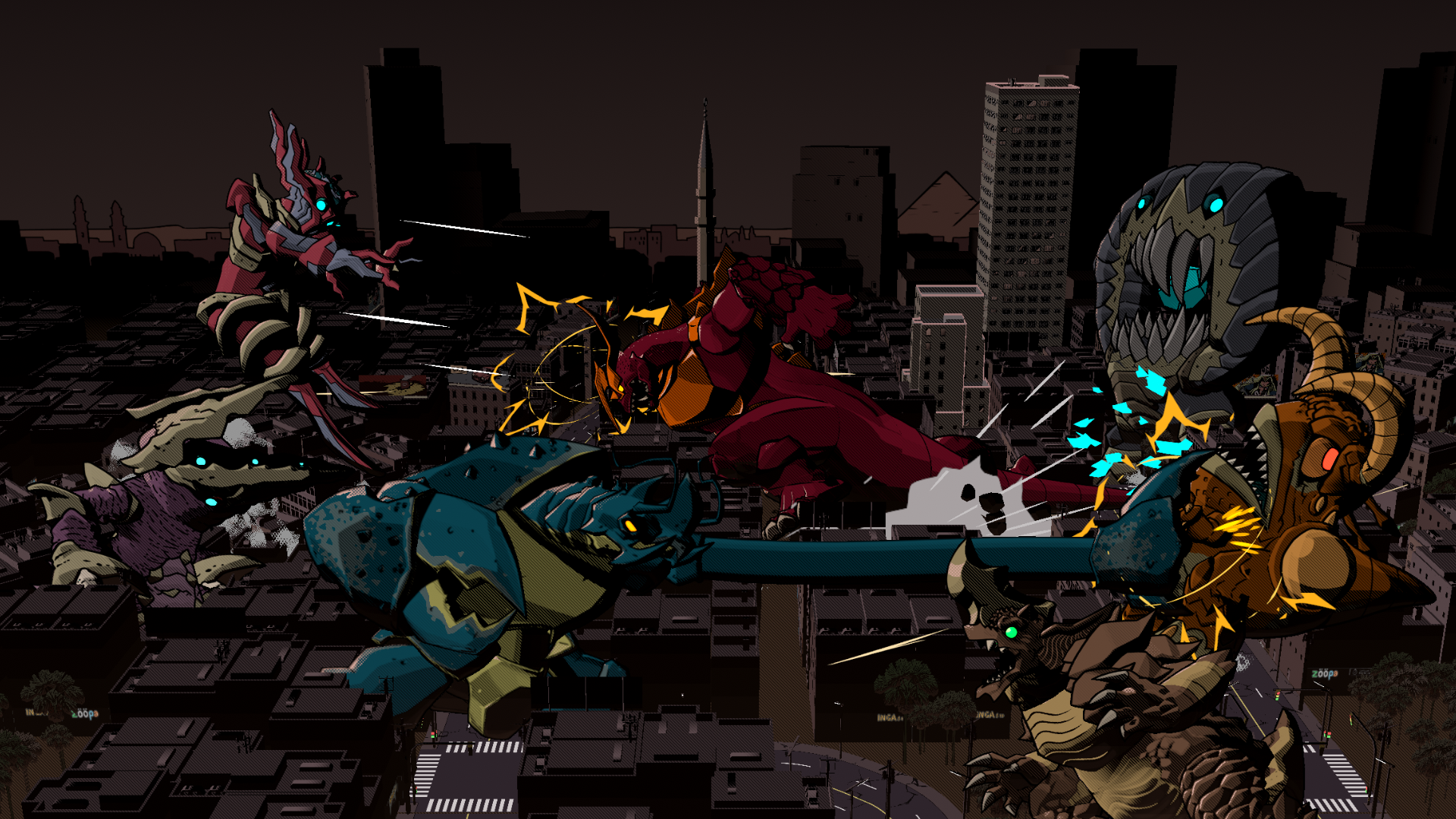 Of course, Dawn of the Monsters owes much to Japan, as well, and Rushdy says the team drew from a lot of the country’s media. In terms of gameplay, he says Platinum Games, the beloved Osaka-based Japanese developer behind action hits like Bayonetta, inspired 13AM’s approach to Dawn of the Monsters.

As Rushdy notes, the challenge was creating the massive scale that defines kaiju stories while retaining the speed and depth — combo systems and all — of a Platinum title.

“We tried to look at the whole thing very holistically, and we tried to look at other kaiju games and other action games. And we came to a decision pretty early on that any decision to make the game feel slow or lumbering or sluggish would be in service of trying to make it seem ‘realistic.’ And the truth is that anyone who likes monster movies doesn’t give a shit about realism because, I just want to see a big robot pick up an oil tanker and smack another monster in the face. Realism checked out as soon as the credits rolled, right?”

The design philosophy, then, boiled down to “fun, excitement, action,” explains Rushdy. 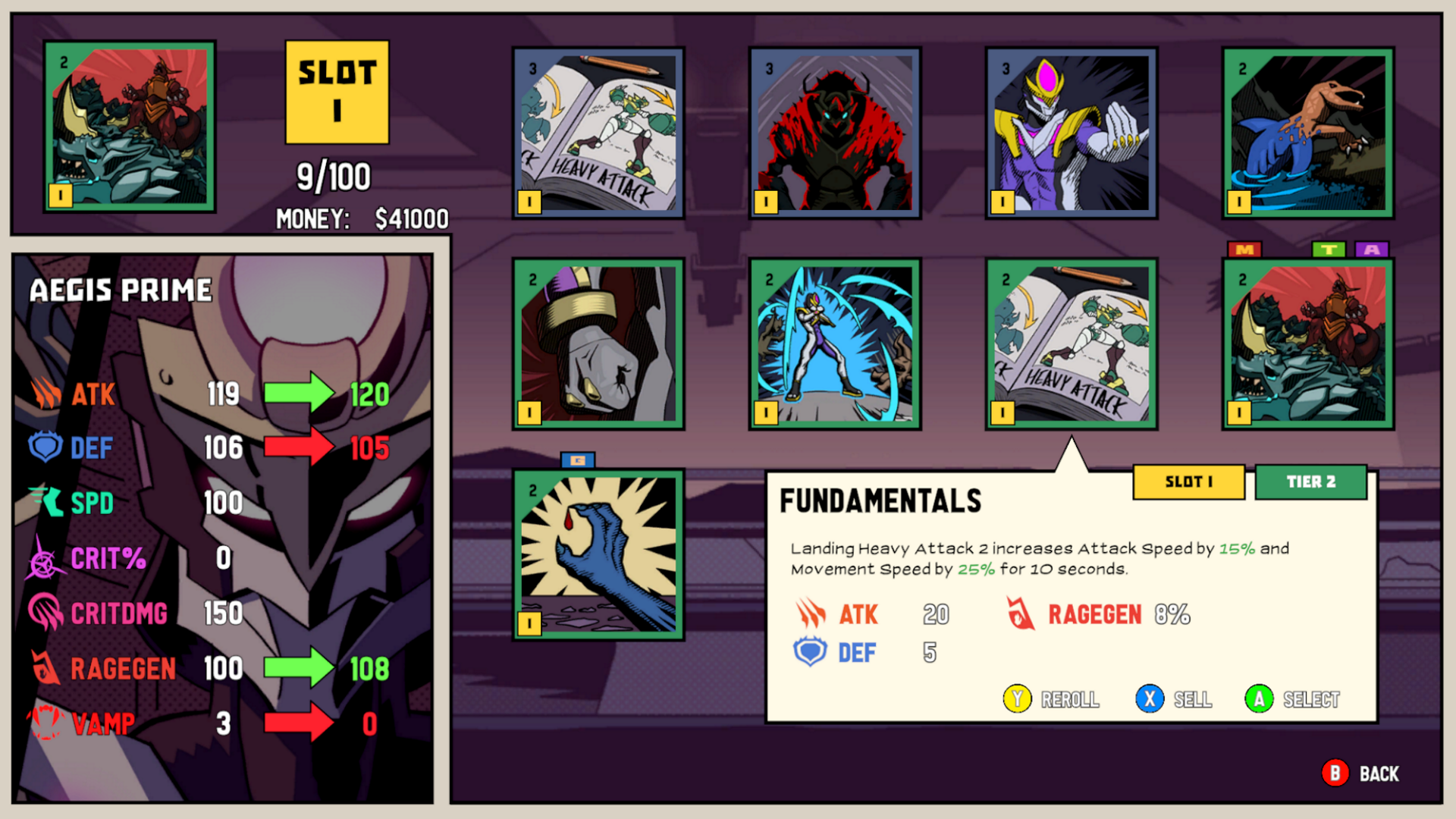 “Let’s make this fun first — the most satisfying action game we can make, monsters or not. And then to make it feel kaiju, to make it feel heavy and weighty, let’s make those attacks big. So when [playable kaiju] Megadon winds up and delivers a punch, it creates an explosion on impact. You’re not going to see, you know, Cody from [Capcom beat ’em up] Final Fight do that because he’s not big enough. When you pick up a building and smash it over someone’s head, it slows down, and then all the bits fly everywhere. So that was key to us, because we also all love those Platinum games, high-quality action games, and just because they’re giant doesn’t mean they can’t still be snappy and fun.”

Adding authenticity to the experience was the involvement of veteran Japanese artists Yuji Kaida and Shinji Nishikawa, who have both worked on several Godzilla films and other related properties. Surprisingly, Rushdy says it was “pretty easy” to get them on board, as he knew mutual friends through G-Fest, an annual Chicago kaiju convention. He even got a chance to meet Kaida while visiting Tokyo.

“They were really humble guys to work with — really easy to work with. And the process was really smooth. Like, Nishikawa designed one of our bosses. And pretty much the first design he sent over was what we put in the game. We worked with a whole bunch of artists all around the world — it was really fun to get these people involved.”

On 13AM’s official Twitter page, the team regularly spotlights these artists, which, in turn, offers neat behind-the-scenes looks at the game.

Partner Spotlight! The legendary Yuji Kaida, known for his work on so many influential franchises like Godzilla, Macross, Gundam and Patlabor! He worked on the amazing movie poster style DotM key art that is used as a cover for the LimitedRun Collector's Edition. @kaidakaizyu pic.twitter.com/DkKZ13ZZlp

That work clearly pays off, with Dawn of the Monsters having a particularly striking art style. According to Rushdy, this came about from an acknowledgment that “kaiju realism” had already been done — the team wanted to do something different.

“We really love anime and comic books and manga and stuff like that. So what we looked at as a key inspiration instead of the movies themselves were the movie posters. There are a lot of hand-painted movie posters for these Godzilla and Gomorrah movies that were really cool and really stylish. And from there, we looked at, ‘okay, how can we simplify this style to make it work for a game?’ And we looked at Mike Mignola from Hellboy. We looked at the recent Gridman, the anime from Studio Trigger, and we’re like, ‘we think we can do something like this. I think this will be interesting and unique enough that even if you’re not a monster movie nut, you’ll look at this game and go, ‘that actually looks pretty neat.'”

In general, Rushdy says the response has been “overwhelmingly positive” to the game.

“It’s been amazing — just overwhelmingly positive. When you get so deep in game development, you kind of get blinders on. And towards the end, you’re like, ‘are people going to like this game? We’ve spent so much time and money on this — will people even care? Or will it just come out and people be like ‘yeah, whatever, it’s like a five out of ten.'” But the response was so good, reviews have been so good, and the passion from the fans has been incredible. It’s become the highest-reviewed kaiju game ever, which isn’t an incredibly high bar, but it’s reviewed very well — it’s not like it’s reviewed poorly. So it’s been a bit of a vindication for us. Certainly, a dream come true for me, personally, to be able to create this world and share it with people and see them resonate with it.”

Dawn of the Monsters is now available on Xbox, PlayStation, Nintendo Switch, PC and Google Stadia.

This is the latest entry in our monthly Canadian game developer series. Last month’s feature focused on Montreal’s Stephanie Marchand of Behaviour Interactive (Dead by Daylight).