With 'Visual and Voice ID,' the smart screen can identify who it is talking to 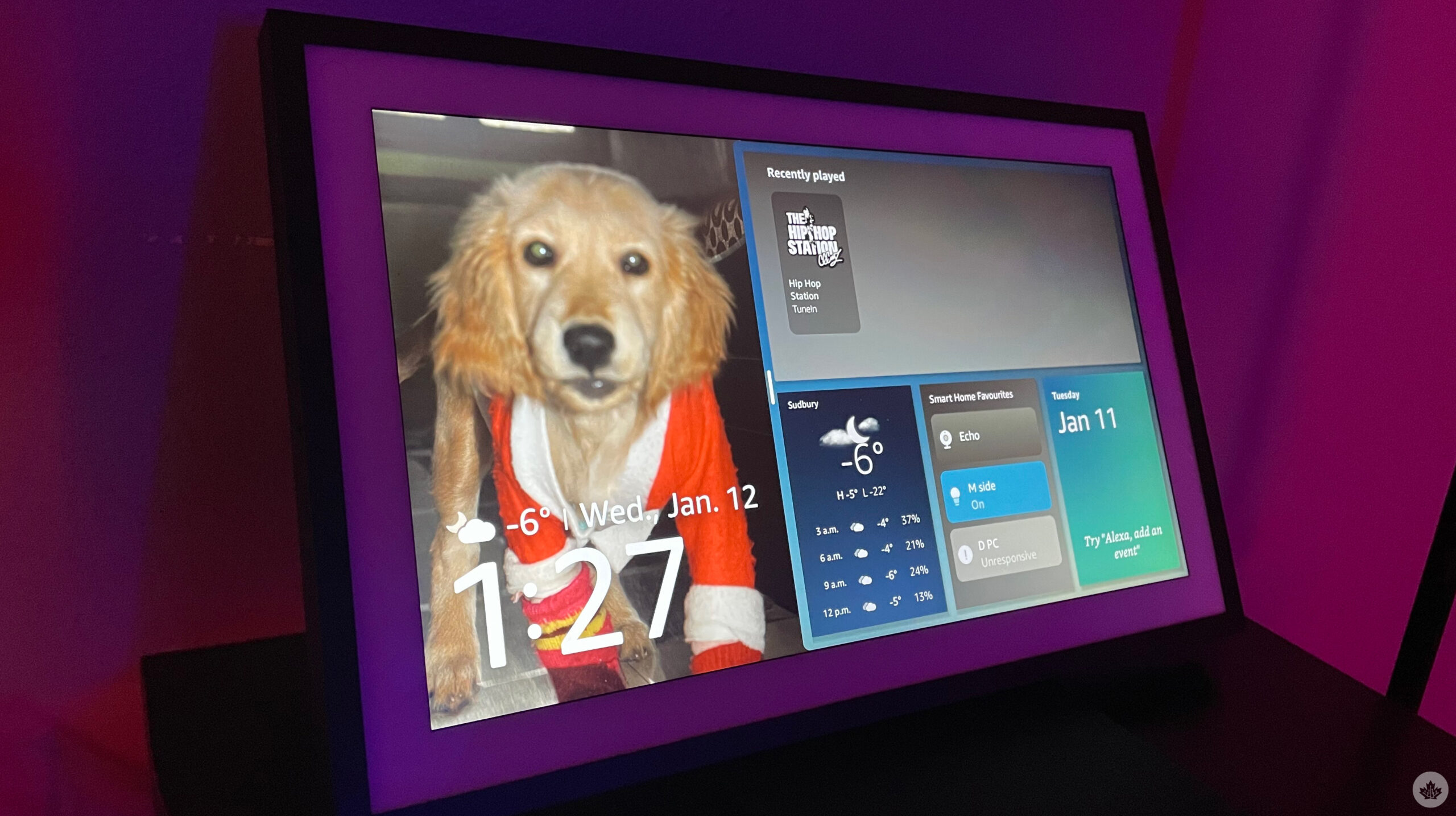 The Echo Show 15’s key talking point is its massive 15.6-inch Full HD screen, but what if I told you its main attraction is what needs the most work?

Amazon’s Echo Show 15 is an extraordinary smart display that features all the controls you’d normally expect from an Amazon smart hub. It features a 5-megapixel camera, two 1.6-inch speakers, several widgets, and Visual ID personalization. It can be mounted on a wall, making it a great hub for a family that wants to share a single Echo device. 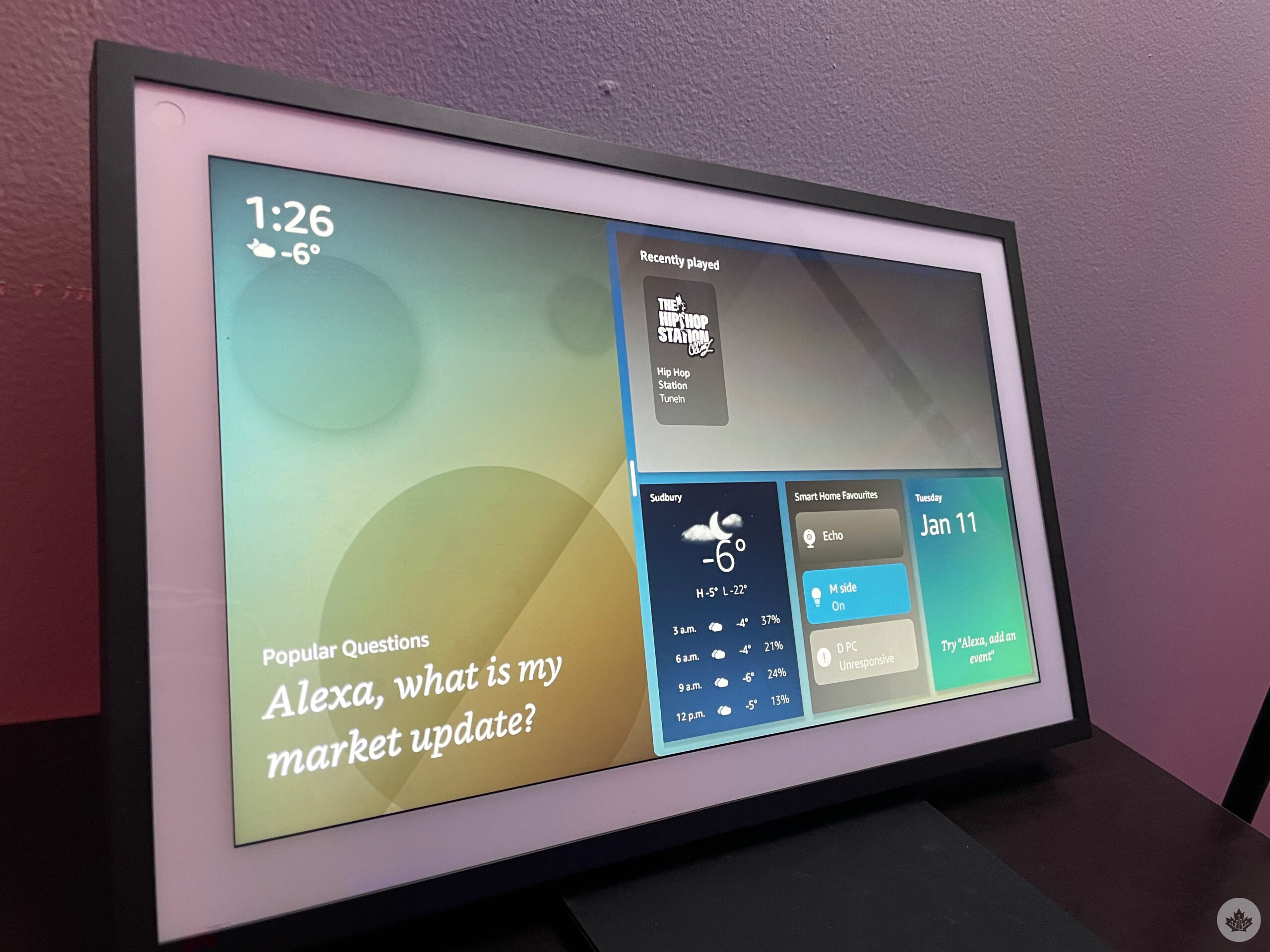 I didn’t mount the Echo Show 15 and instead used its accompanying stand to place it on a corner table in my living room.

Overall, the Echo Show 15 is a great buy if you’re looking for a big display hub that the entire family can use — kind of like a central bulletin board for family members to exchange information, communicate, and stay connected — but for $329.99, I expected a smoother display and a better camera.

Design-wise, the Echo Show 15 is a big revamp from the last-gen Echo Show 10, with a large chunk of the body made of post-consumer recycled plastic and aluminum.

It features a camera shutter, volume up/down buttons, and a mic on/off button at the top, making the buttons highly accessible and easy to use.

While the device’s body is made of plastic, it doesn’t feel cheap or flimsy, and the matte-ish borders give the display a premium feeling that reminds me of an expensive photo frame or painting.

The device measures 1.4 inches thick and looks and feels like a chunky tablet.

It comes with a wall mount and necessary screws and instructions for you to attach the smart display to a wall, though you’ll need tools to drill the screws in. For reference, here is how it compares to a 27-inch monitor in size: 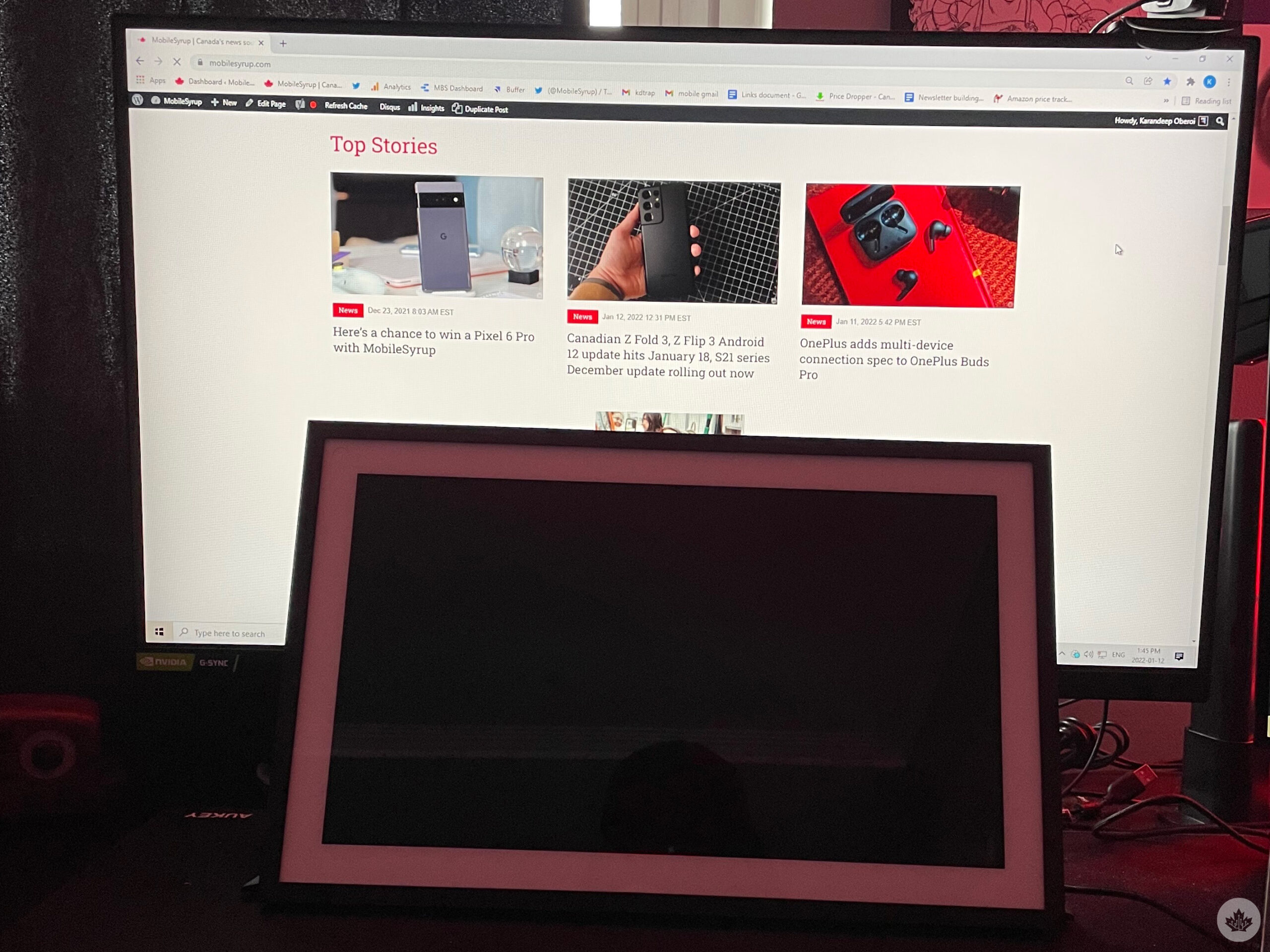 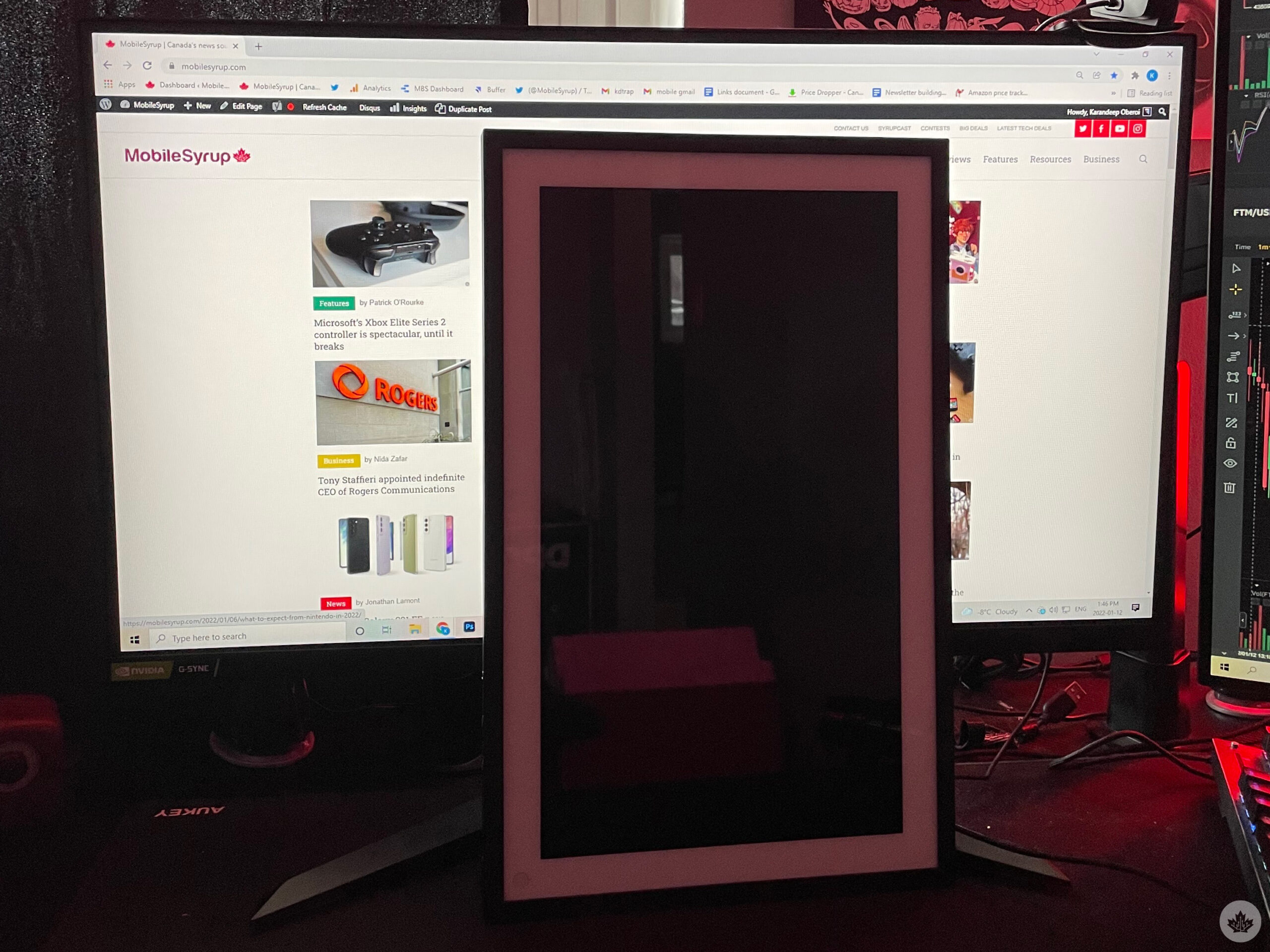 The Echo Show 15 uses Amazon’s custom-designed AZ2 Neural Edge processor to power near-instant, on-device speech and image processing. This enables ‘Voice ID’ and ‘Visual ID,’ allowing the Echo Show 15 to recognize who is speaking to it and respond accordingly with curated news, music and more.

Visual ID lets the device identify who is standing in front of it (kind of like face unlock on a smartphone) and curates content for that person.

In my experience, Visual and Voice ID work perfectly on the Echo Show 15. My housemates and I switched between facing the display in quick succession, and to our surprise, the device was able to identify who was engaging with it without any error.

Also introduced with the Echo Show 15 are new widgets that can be placed on the home screen. In total, there are 14 widgets, out of which 13 are available to me on my device. These include the likes of smart home control, calendar, to-do list, shopping list, weather forecast, sticky notes, music, photo frame and more.

Some of the widgets, like your shopping and to-do lists, reflect changes in your Alexa app on your smartphone, making it easy for you to make a list on the Echo and read it on your smartphone while you’re out and about.

You’re only able to fit six widgets on the home screen at once, though more can be revealed by sliding the widget bar to the left and selecting the Widget Gallery. These widgets were all created by Amazon, though the company said it will soon allow developers to make their widgets that might be available for everyone. Additionally, widgets are also making their way to older Echo smart displays, so widgets aren’t something that will set the Echo Show 15 apart from its predecessors in the future.

While I don’t have a problem with the limited amount of widgets on the home screen (I like to keep the home screen clutter-free), I was disappointed with the lack of customization. The widgets can only be resized to be small or large, and that’s further restricted to certain widgets. It would have been nice to get free-form resizing controls so I could size widgets exactly how I want, and that might come true with Amazon expanding the range of widgets in the near future. But you’ll have to work with the shape and size they come in for now. 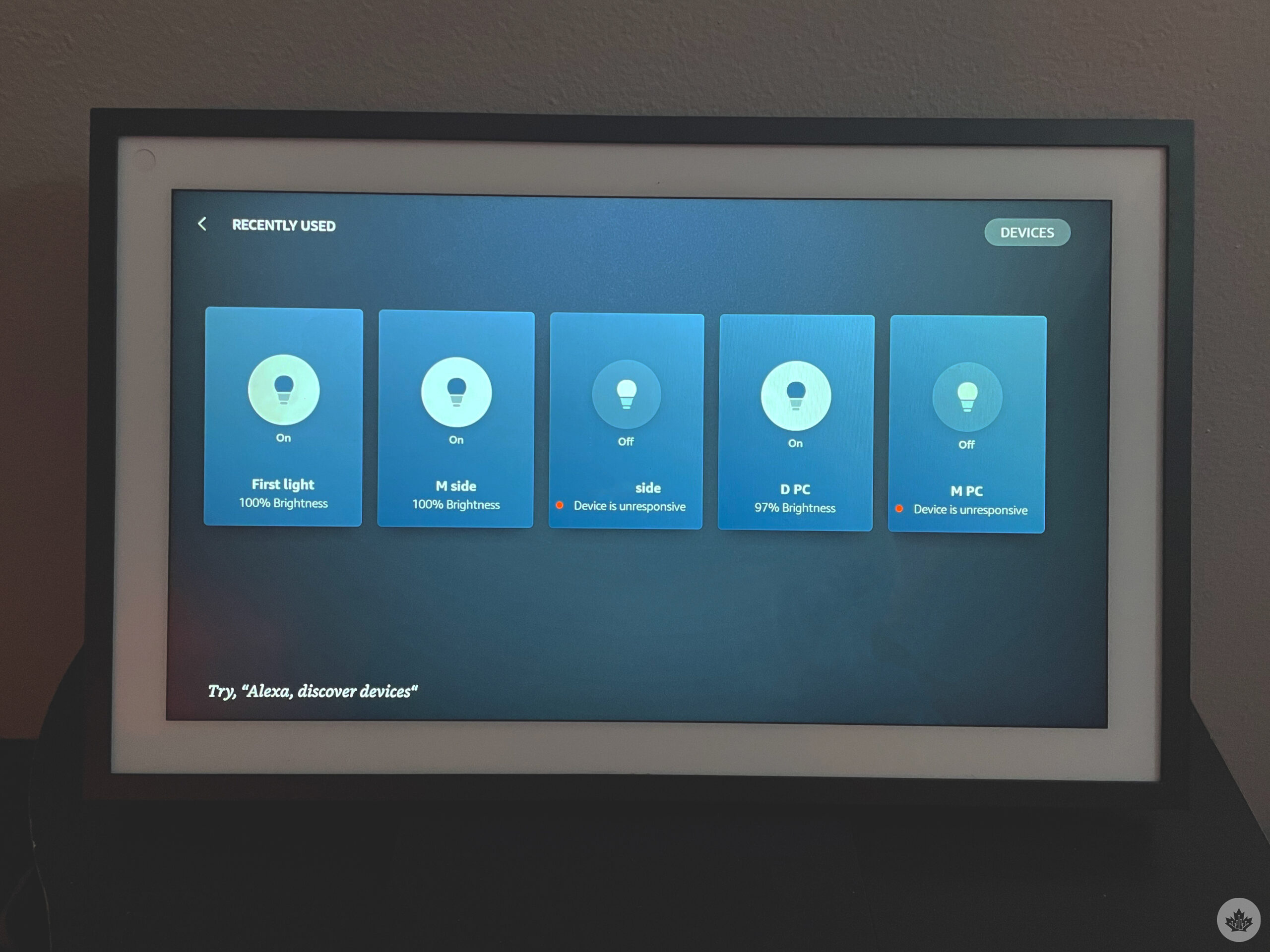 Pairing and controlling your smart home devices with the Echo Show 15 is a breeze. You either ask Alexa to turn on/off a smart device or manually do it on the screen. It can also connect to your smart doorbell, giving you direct access to the footage on the big screen. And if you want to multitask, you can minimize the stream to a floating window/picture-in-picture and continue using the smart display.

To listen to specific songs or playlists of your choice, you’ll need an Amazon Music subscription; however, if you don’t mind listening to pre-made playlists of a specific genre, you wouldn’t need to subscribe. For example, if you say “Alexa, play Holy Grail by Jay-Z,” it’ll ask you to get a subscription, but if you say “Alexa, play early 2010’s hip-hop music,” a pre-made playlist of songs from that era will start playing.

You can also link your Alexa to your Spotify, Apple Music, Deezer or SiriusXM account and play music from the services you might already be paying for. While you can’t open the services mentioned above directly on the device, you can say, “Alexa, play Holy Grail by Jay-Z on Apple Music.”

The smart display can also act as a Smart TV if you’re okay with the tablet-sized viewing experience. 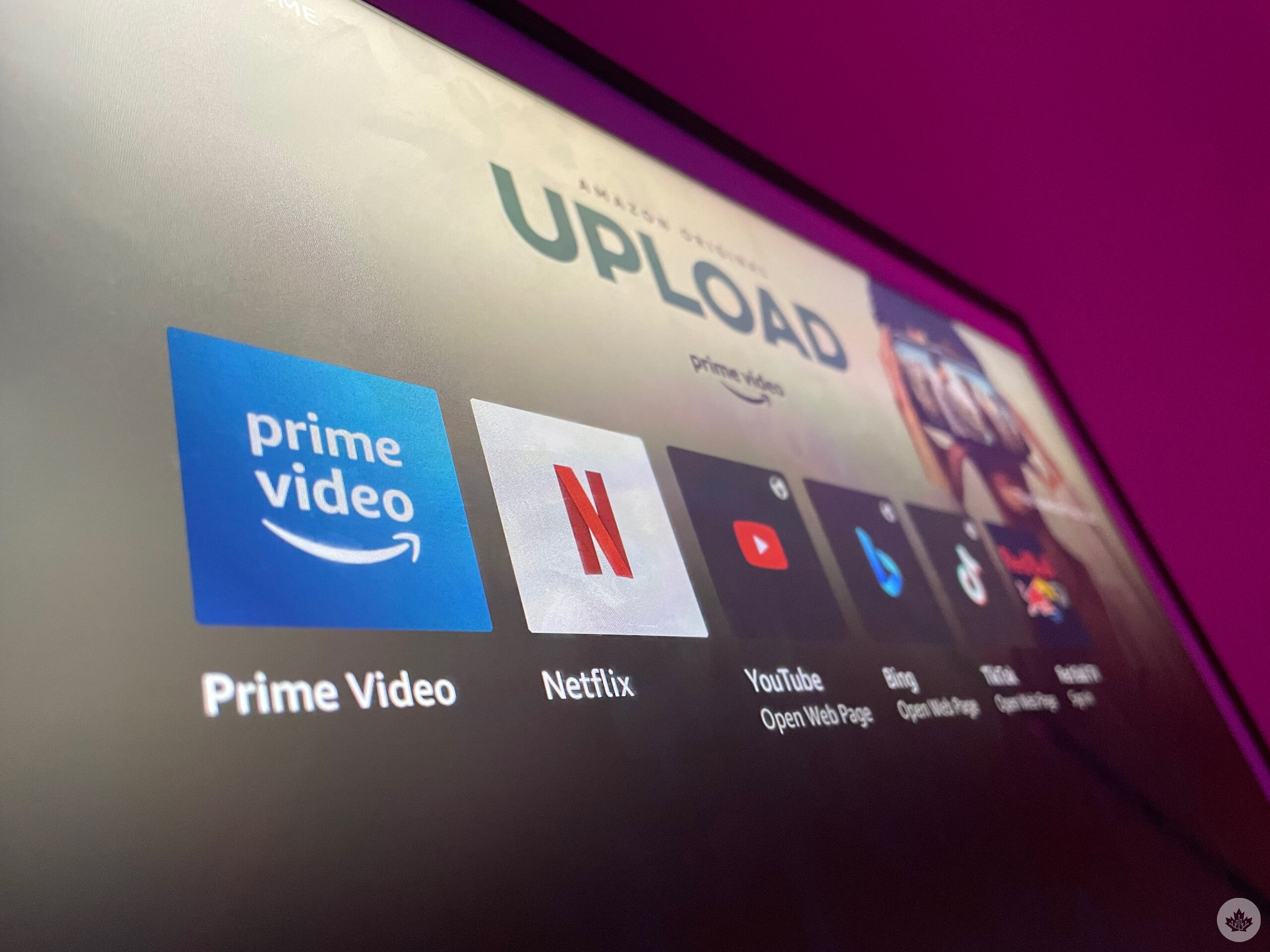 You can access Amazon Prime Video, Netflix and Red Bull TV directly from the device, and the likes of YouTube and TikTok from an on-device browser. My experience with the latter was somewhat choppy and laggy, and the YouTube interface on web is less than stellar, though everything played at Full HD, so I was fine with the sacrifice.

Additionally, asking Alexa to “open YouTube” works like any other task. I mention that because initially, I thought I would have to manually go to the browser and open YouTube since it isn’t an in-device app, but I was pleased to be proven wrong. 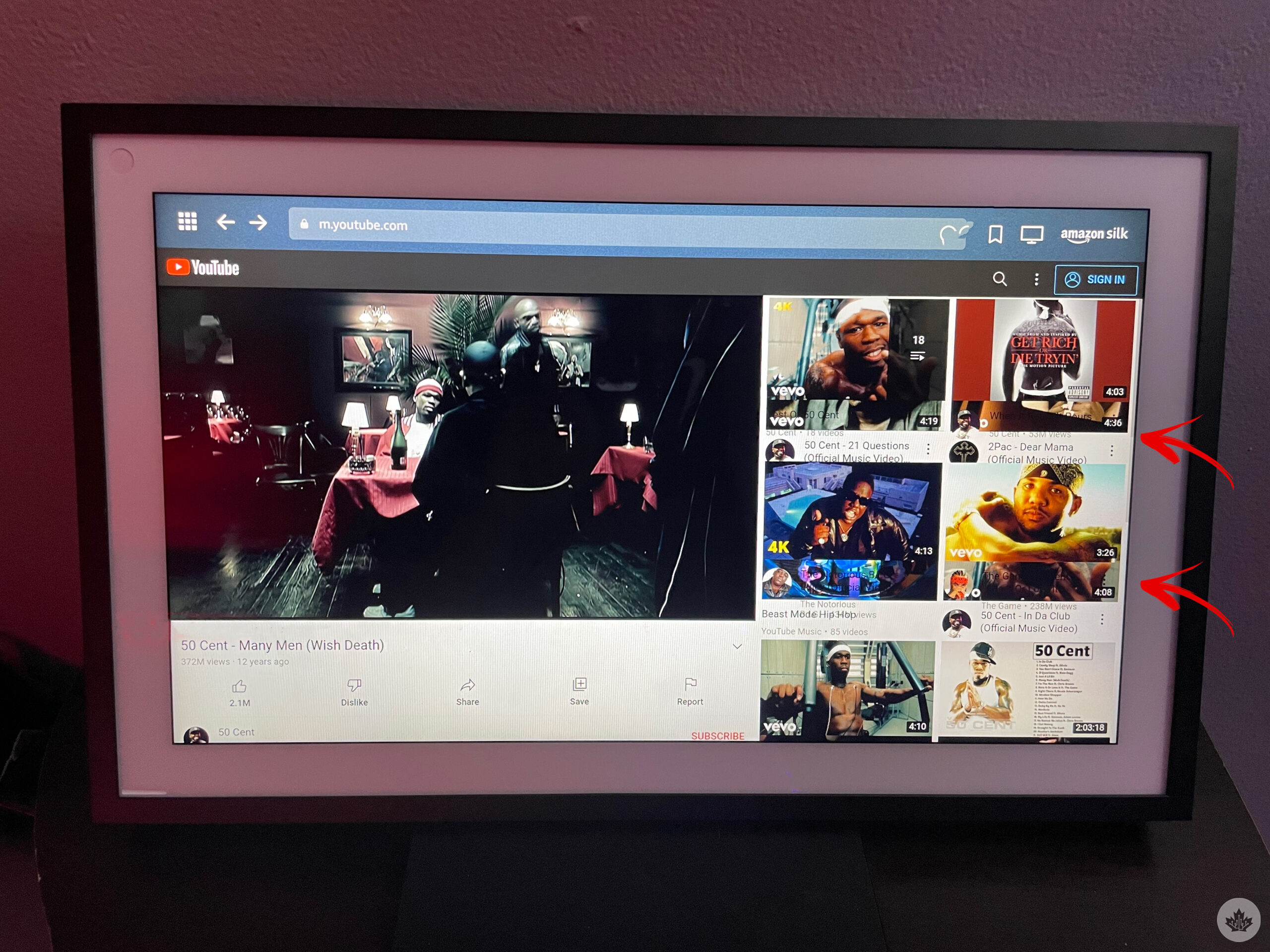 Drop-in is one such feature that I’m not too comfortable with. To access Drop-in, all you do is go to the Alexa app on your smartphone and head to the communication section. Tapping on Drop-in initiates a video call that doesn’t need to be answered from the smart display and starts automatically.

While this might not be an issue for family members dropping in on each other, or maybe to monitor your kids and pets while you’re not at home, the worrying issue is if someone gets access to your smart display and connects it to their Alexa app. This individual now has access to Drop-in and can spy on whatever is in view of the smart display until you realize it and boot the person from the system. That is one of the reasons why I appreciate Amazon adding a slider to block the camera off and why I have it covered until I need to use it.

Similarly, if you have more than one Echo device at home, you can use the Echo Show 15 to Drop-in, call or announce a message to the other Echo, making it useful if you live in a big house and want to communicate with the other members without having to shout “dinner is ready!’

It’s hard to dislike the Echo Show 15 because it really has made my life easier. From managing other smart home devices to setting reminders or listening to music, the smart home hub can do it all. Though its display is, unfortunately, lacklustre.

If you’re looking at still images or just the regular home screen, the full HD display is great. It features optimal colour accuracy, sharp blacks, ample brightness and great detail. Though the story changes completely when it comes to animation, transitions, or anything in motion. 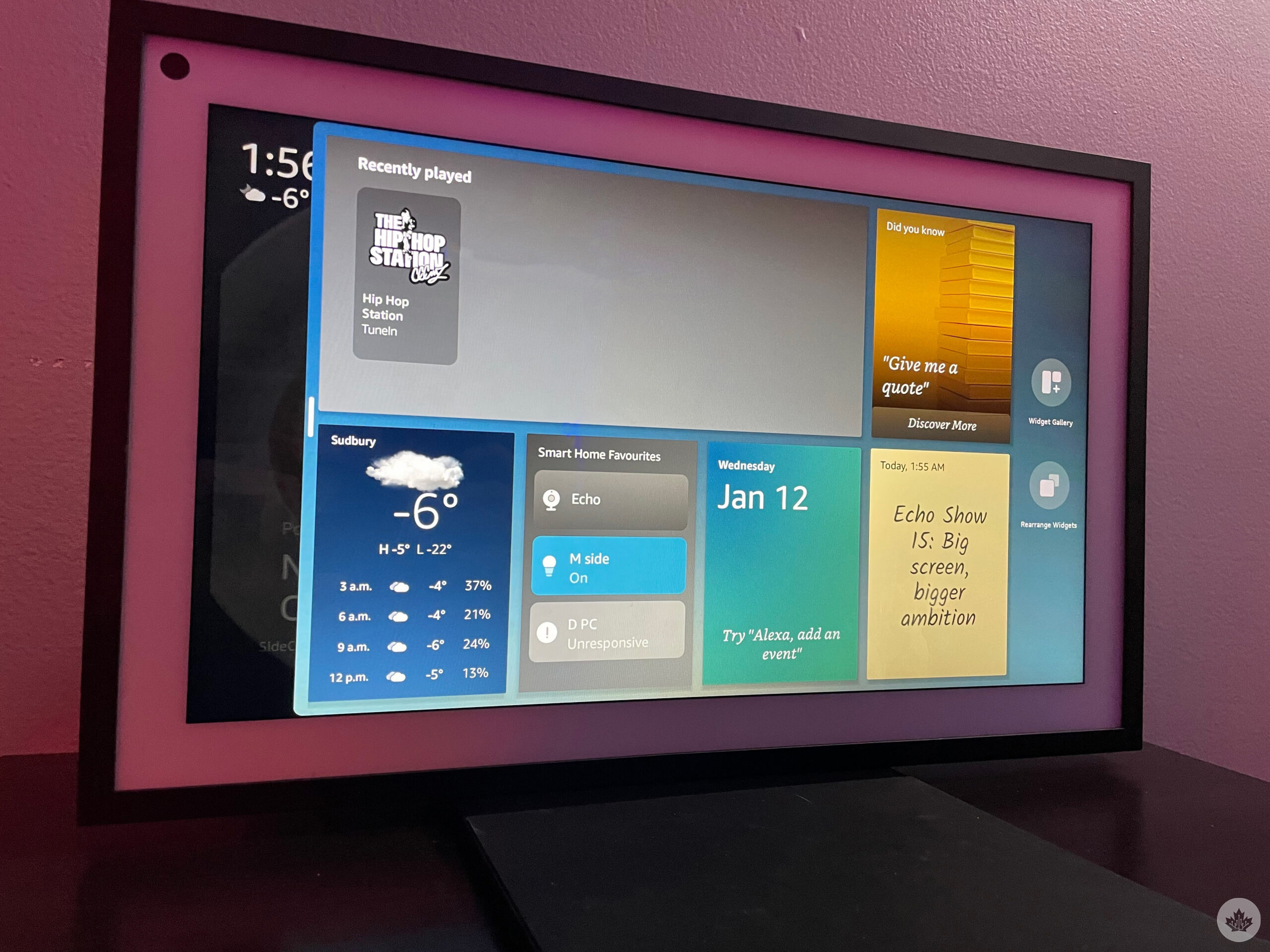 I’m still not completely sure what the refresh rate on the display is, but I don’t think it’s higher than 30Hz. Sliding down to bring up the taskbar, moving widgets around, or doing anything on the home screen feels choppy and laggy, with a very noticeable delay.

Surprisingly, the same doesn’t translate when you’re watching a TV show on Amazon Prime Video or on YouTube, for example. On those platforms, the video seems to flow seamlessly without noticeable lag or choppiness, so I would suspect that the issue is with Amazon’s home UI. Nonetheless, it doesn’t paint a pretty picture for the display, as a majority will spend most of their time using the laggy home screen and its widgets.

The camera struggles in low-light conditions to the point where you can’t recognize who is standing in front of it. The Echo Show 15 definitely isn’t a device that’s supposed to have a top-of-the-line camera. Neither is it designed to replace your DSLR, but it’s confusing why Amazon would one-up everything about Echo Show 10 with the Echo Show 15 but downgrade the camera.

Echo Show 10’s tracking feature also didn’t make it to the new smart display, though its cameras get the job done if you’re in a well-lit room with light in front and not behind you. 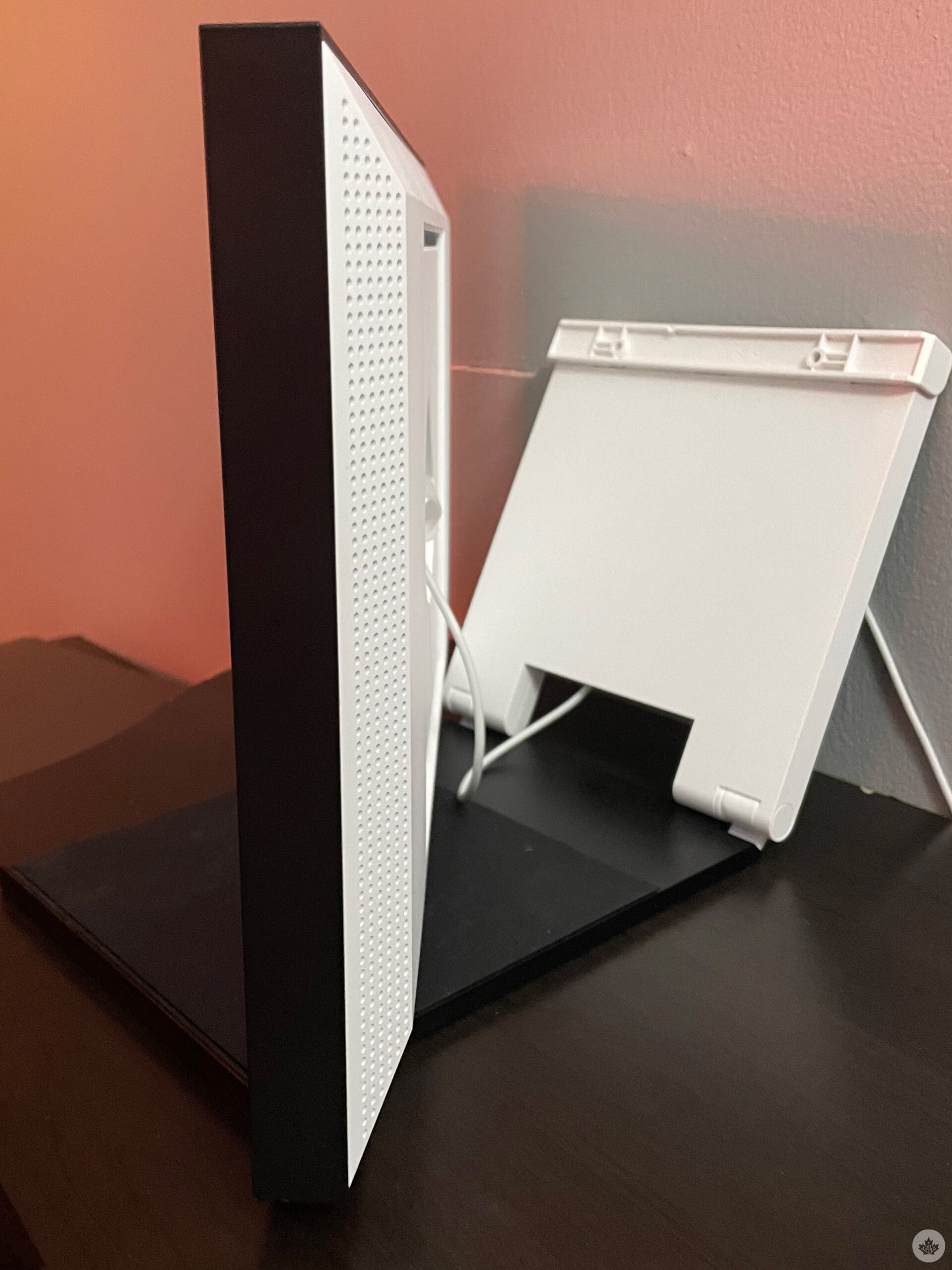 The speakers on the Echo Show 15 are well hidden on the device’s rear left and right edges (if it’s in landscape mode). They are great for calls, for listening to podcasts or the news.

Vocal-heavy songs sound fine coming through the two 1.6-inch speakers, but anything with bass sounds bland and lifeless. They are fine if you just want some background music playing to keep you entertained, and they can get pretty loud too, but don’t expect it to be your primary music player for when you’re in the mood to mosh.

While the Echo Show 15 does have its drawbacks, like its choppy home UI, average camera and speakers, it’s still a solid, smart display with a unique look. Its Voice and Visual ID would best suit families looking to up their smart home game. It will fit perfectly in a big home, preferably in the living room where it can act as a bulletin board-like central hub for communication, with family members leaving notes for each other, or as a beautiful photo frame when left idle.

That said, it does cost $329.99, and I personally would wait for a price drop before I decide to purchase it.