I, too, keep up on the latest tech and telecom news via JRPG/anime discourse on Twitter 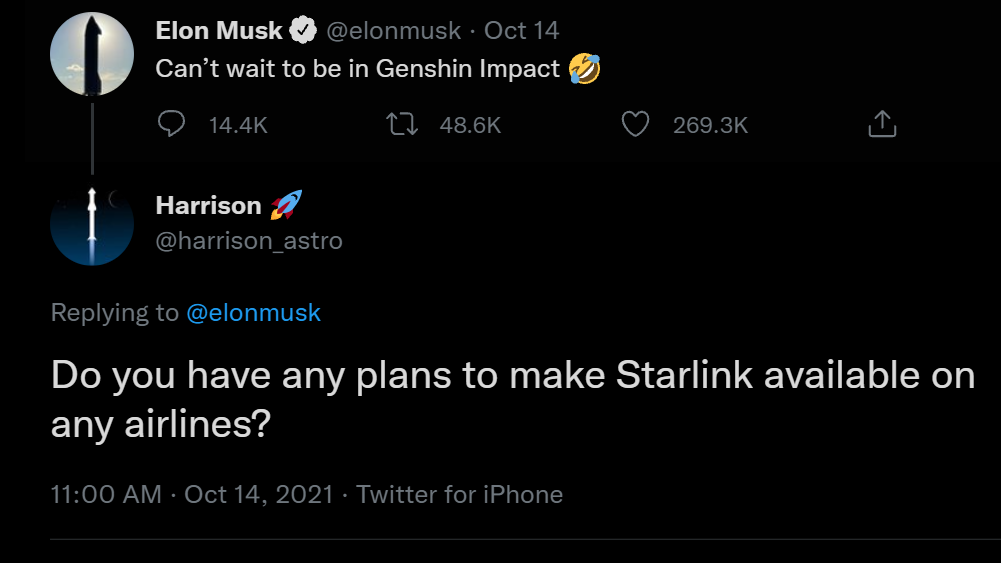 SpaceX CEO Elon Musk says talks are underway to see if airlines are interested in having Starlink satellite internet service installed on their commercial aircraft.

In this case, that includes Starlink — SpaceX’s low-orbit satellite internet project, which is currently in its beta testing phase.

When asked via tweet if he had “any plans to make Starlink available on any airlines”, Musk replied: “Yes, we are talking to airlines about installing Starlink. Please let them know if you want it on your airliner. Low latency ~half gigabit connectivity in the air!”

Yes, we are talking to airlines about installing Starlink. Please let them know if you want it on your airliner.

Low latency ~half gigabit connectivity in the air!

No specific airlines or timelines are mentioned in the tweet, though it’s worth noting that SpaceX began seeking regulatory approval back in March 2021 to hook up trucks, shipping boats and aircraft with Starlink internet.

But while outlets such as Reuters did report on this update in Starlink’s ongoing quest to beam internet from space to moving vehicles, you’d be forgiven if you missed seeing the actual announcement on Twitter.

This is because the tweet itself was buried within in a thread about the popular JRPG Genshin Impact.

In fact, just two tweets below this major piece of news from the centimillionaire CEO who wants to colonize Mars, Musk also shares some of his favourite anime titles (Princess Mononoke felt a bit ironic, given the film’s core theme of nature fighting back against human greed and industry) and that he prefers the character of L over Light in Death Note.

On September 17th, Musk tweeted that Starlink should exit its beta phase sometime in October — i.e. this month.

Another tweet from Musk, this time on August 23rd, stated that SpaceX has so far shipped 100,000 Starlink terminals to countries across the globe.