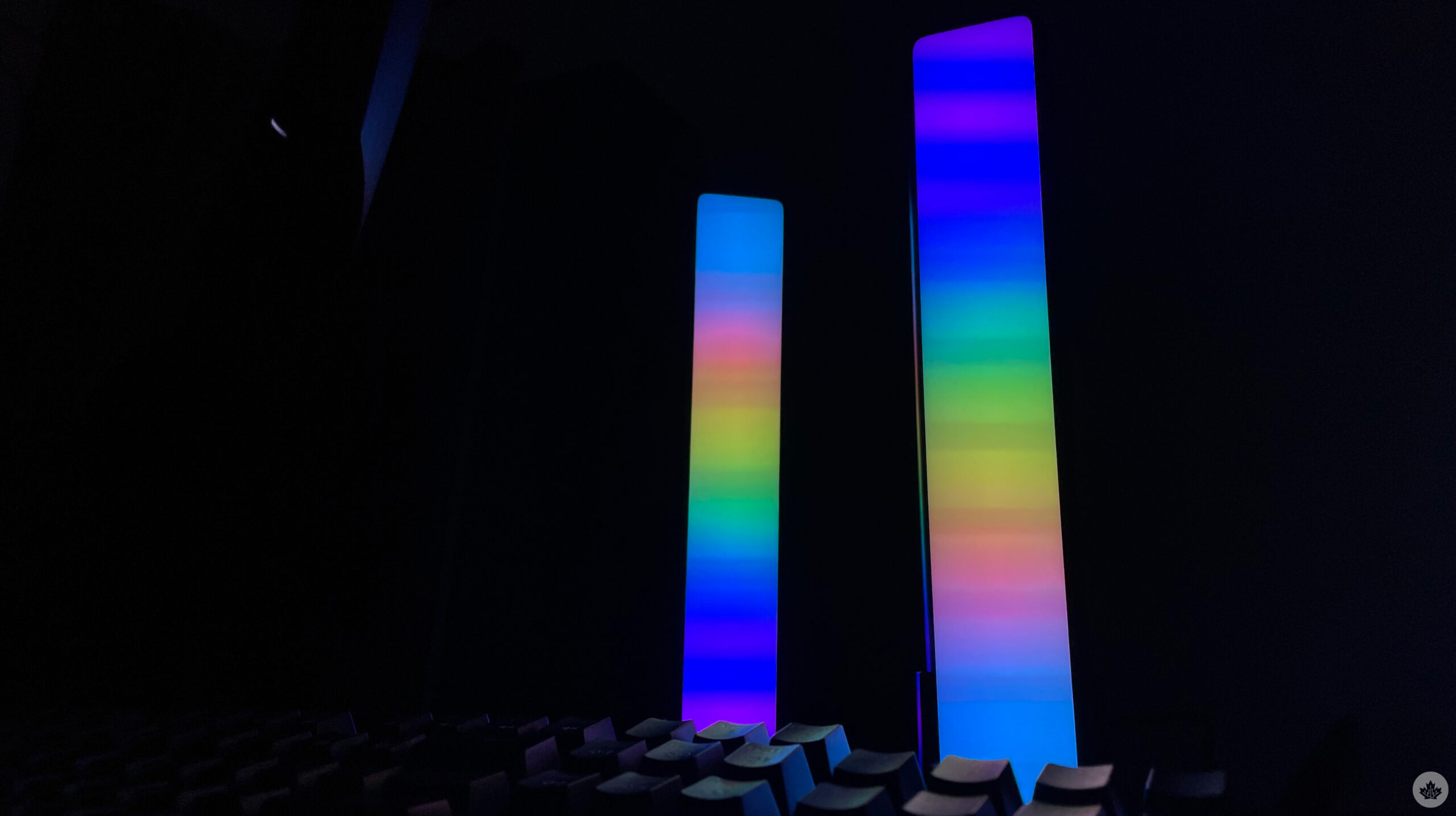 Govee’s latest LED light offering, the Flow Pro Light Bar, is a set of small light towers that replicate the colour scheme of your TV or computer monitor and pushes those colours out onto a wall.

It can spice up the overall aesthetic of your setup and could be a decent buy over the similar functioning, yet more expensive, Philips Hue Play Light Bars depending on what you want them to do.

The installation process is relatively simple and takes about 15 minutes.

First, there are the light bars, which are LED strips locked inside a plastic bar housing with a translucent front that diffuses the light. 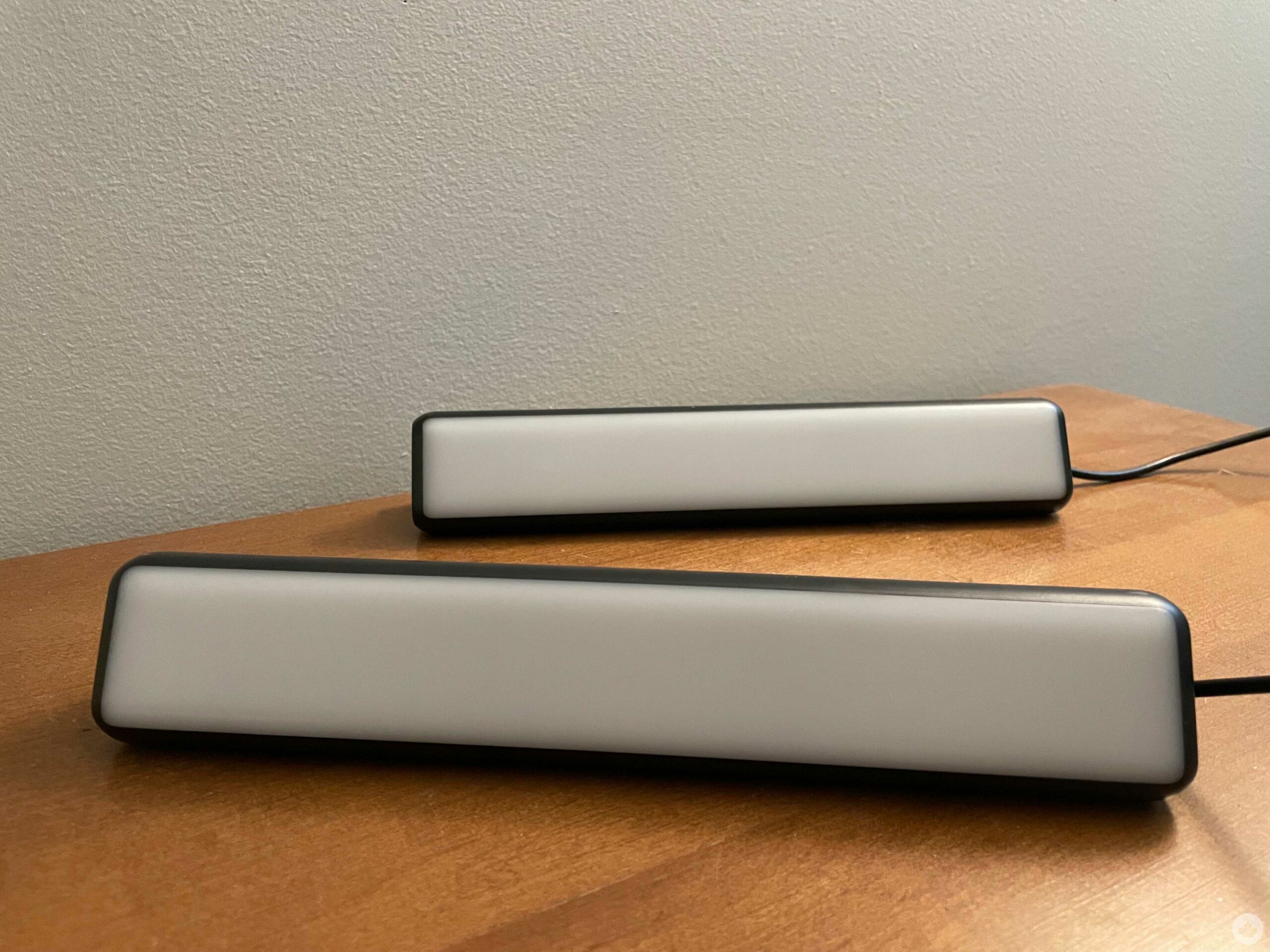 You have a few options for where to place the LED bars: Directly behind your TV or monitor with the in-box table stands, mounted to the back of your display with the included mounting brackets or placed near your TV.

I’m using the light bars with my PC setup, so it makes sense for me to place the bars on the table — right behind my monitor.

Once mounted or placed, the light bars connect to a Control Box via USB-C, which is then powered by a power adapter. The control box includes three buttons on the top for switching the device on/off, a colour button, and a music/dimmer button. 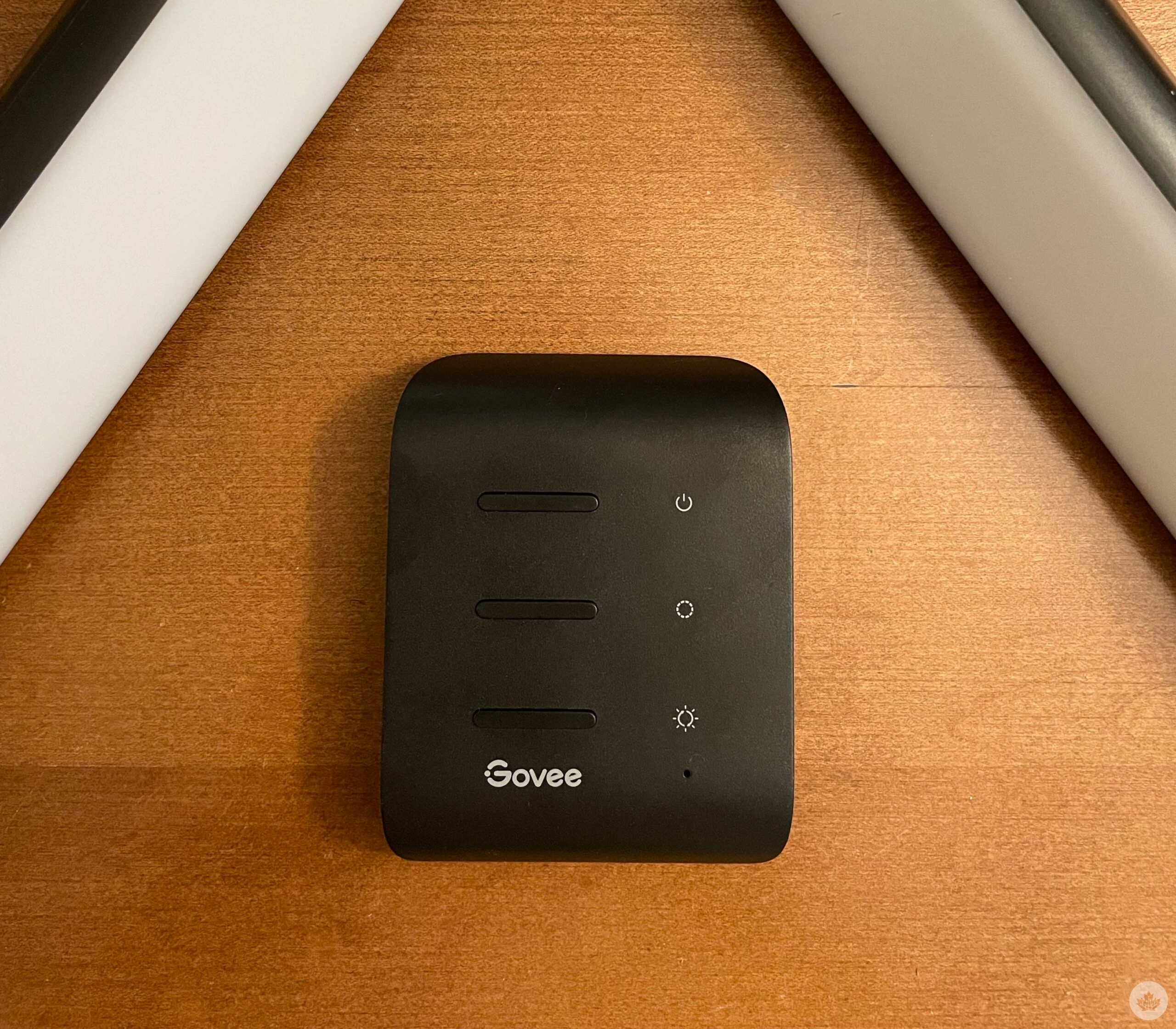 However, the lights can also be controlled from your phone via Bluetooth using the Govee Home app, which lets you control scene settings, set timers, adjust brightness levels, and select different light modes.

“While the Govee Flow Pro Light Bar isn’t suitable for gaming, I found the lights to be visually delightful while watching movies or a show.”

At this point, the Govee Flow Pro Light Bars are installed and ready to use, but to utilize some of the more advanced features that earn the light bars the ‘Pro’ tag, you’ll have to follow some additional setup instructions.

You’ll find a 1080p oblong camera in the box that acts as the eye of the operation. It can be placed on top or at the bottom of your TV/monitor and connects to the Control Box via USB-A. I decided to place it on top, since the bottom of my monitor sits too close to my keyboard.

The camera’s sole purpose is to detect the colours on your display and push the same coloured light out from the light bars.

To calibrate the camera with your display, you’ll need to attach seven orange-coloured foam stickers (provided in-box) to the edges of your screen and enter ‘Video’ mode on the Govee Home app, available on the iOS App Store and Google Play Store. 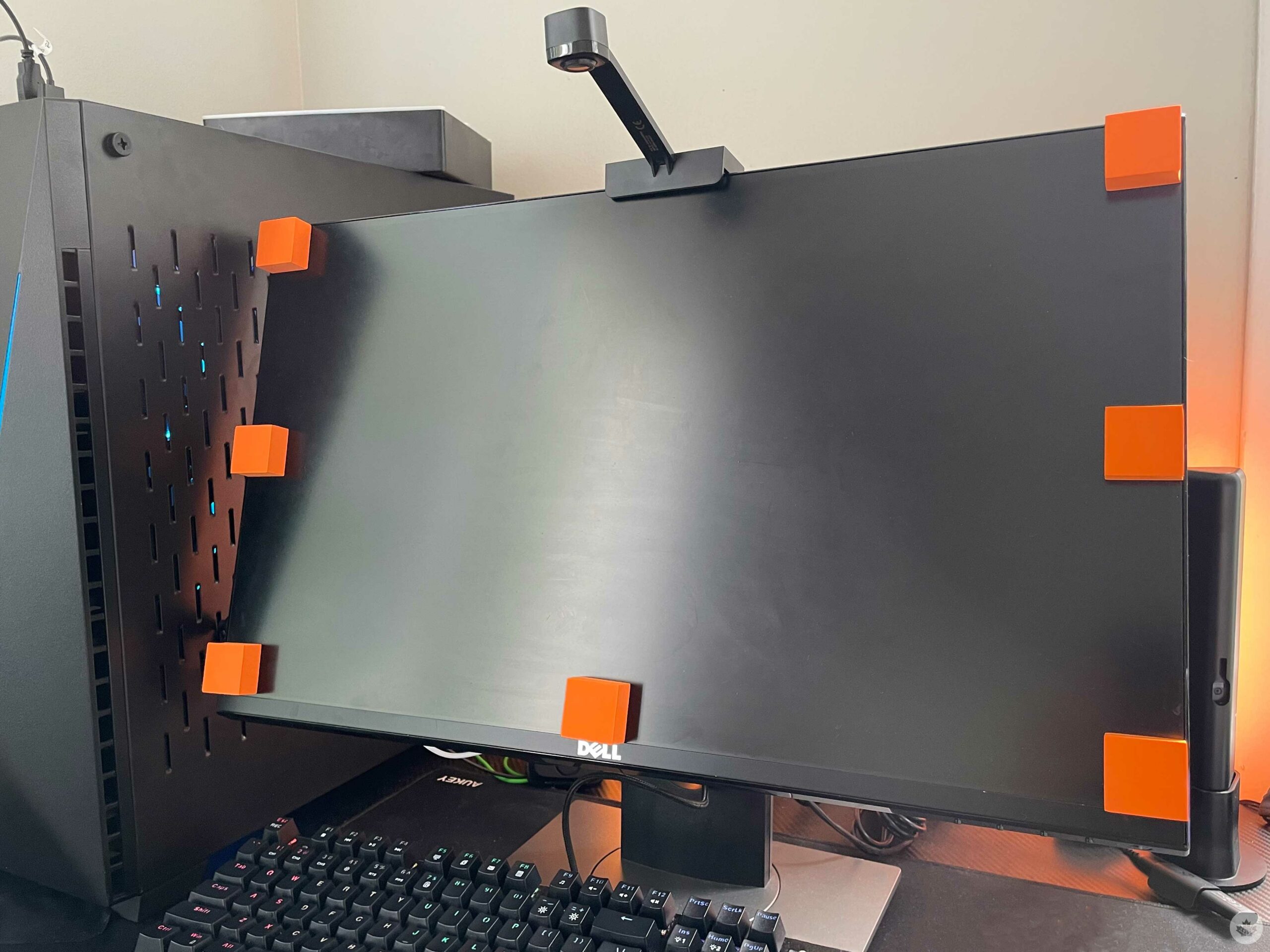 This mode will automatically take you to the calibration screen when installing the camera for the first time. From here, you’re able to align the camera’s focus points with the edges of your television screen, allowing it to detect your display’s colours accurately. 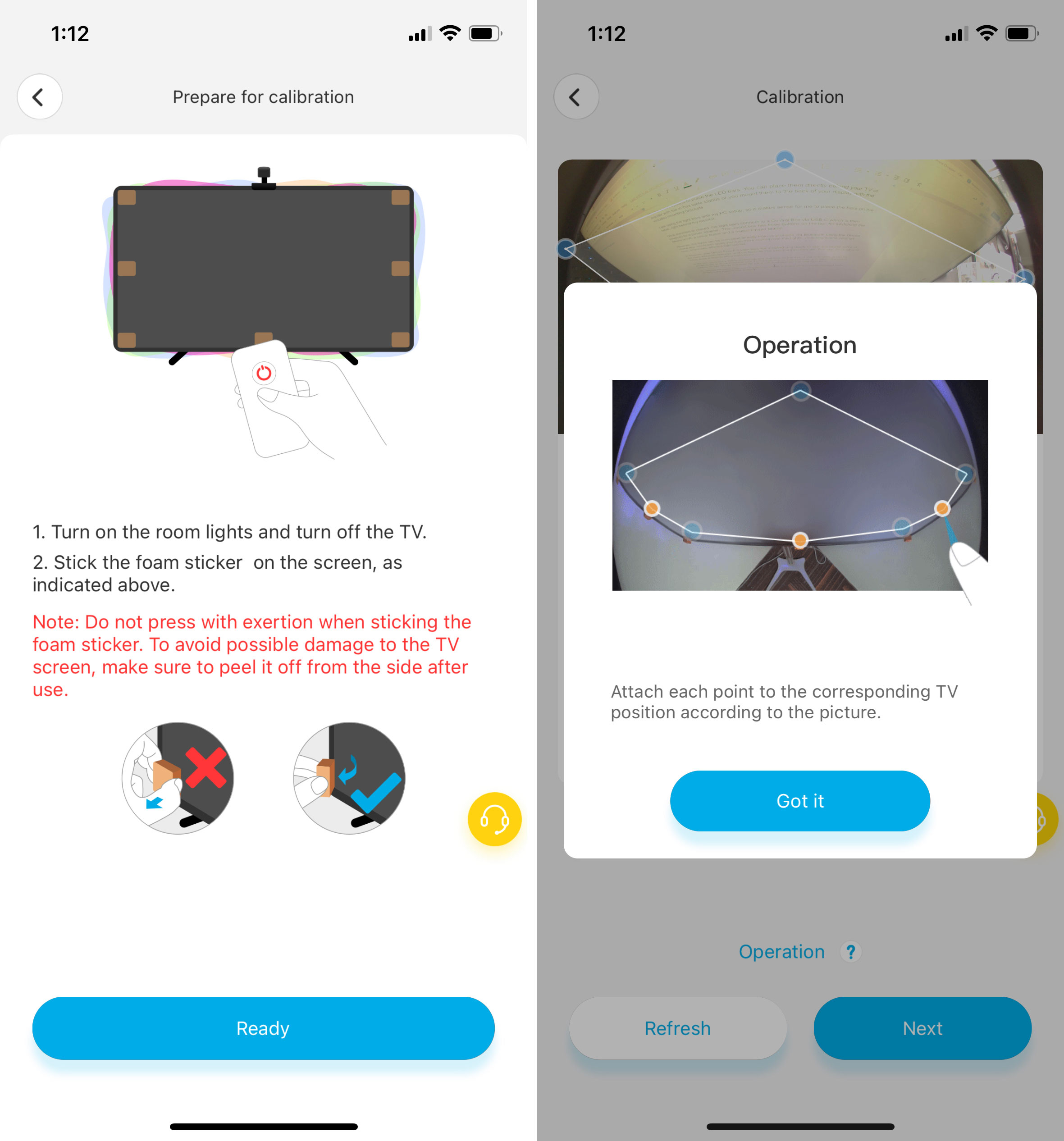 Once calibrated, you can see the light at the end of the tunnel.

Flow Pro gets the green light. Video mode, not really

The Govee Flow Pro Light Bars push out consistently bright light, and while the body of the bars are plastic, they don’t feel cheap or flimsy. The same goes for the camera, even if it looks odd stretching out from your screen.

The Govee Home app provides complete control over the lights with different modes, such as a Music Mode that listens for audio cues and changes the lights accordingly.

The app also gives you an option to sync music via a mic on the Control Box or your phone’s mic. Regardless of the mic you choose to sync the audio with, it works well — albeit with a slight millisecond delay. 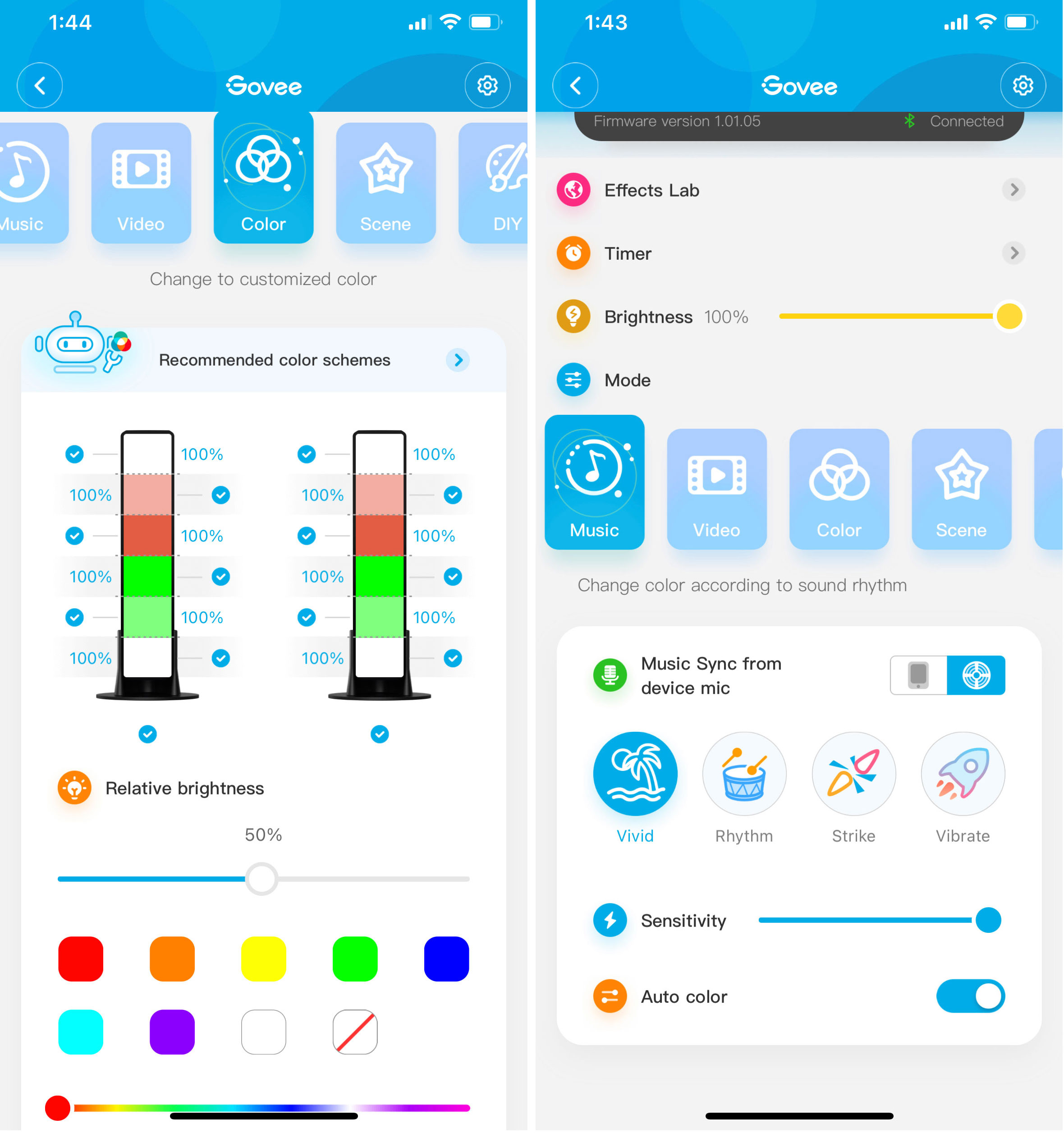 Next on the list is a Scene Mode with a dozen pre-built scenes that animate the lights in different ways, such as Breathe, Reading, Romantic, Bloom, and my favourite, Aurora. You can also download and try DIY Scenes produced by other users.

The main attraction here is the Video Mode, and I’m not sure how I feel about it. I’m a little uneasy about a camera mounted to the front of my monitor from a company I don’t really trust, especially since there’s a mic built into the control base — but without the camera, there’s no Video Mode.

Other LED lighting setups use HDMI to achieve the same video-to-light mimicking effect, which of course, offers less of a risk privacy-wise and in some situations can work more effectivly. 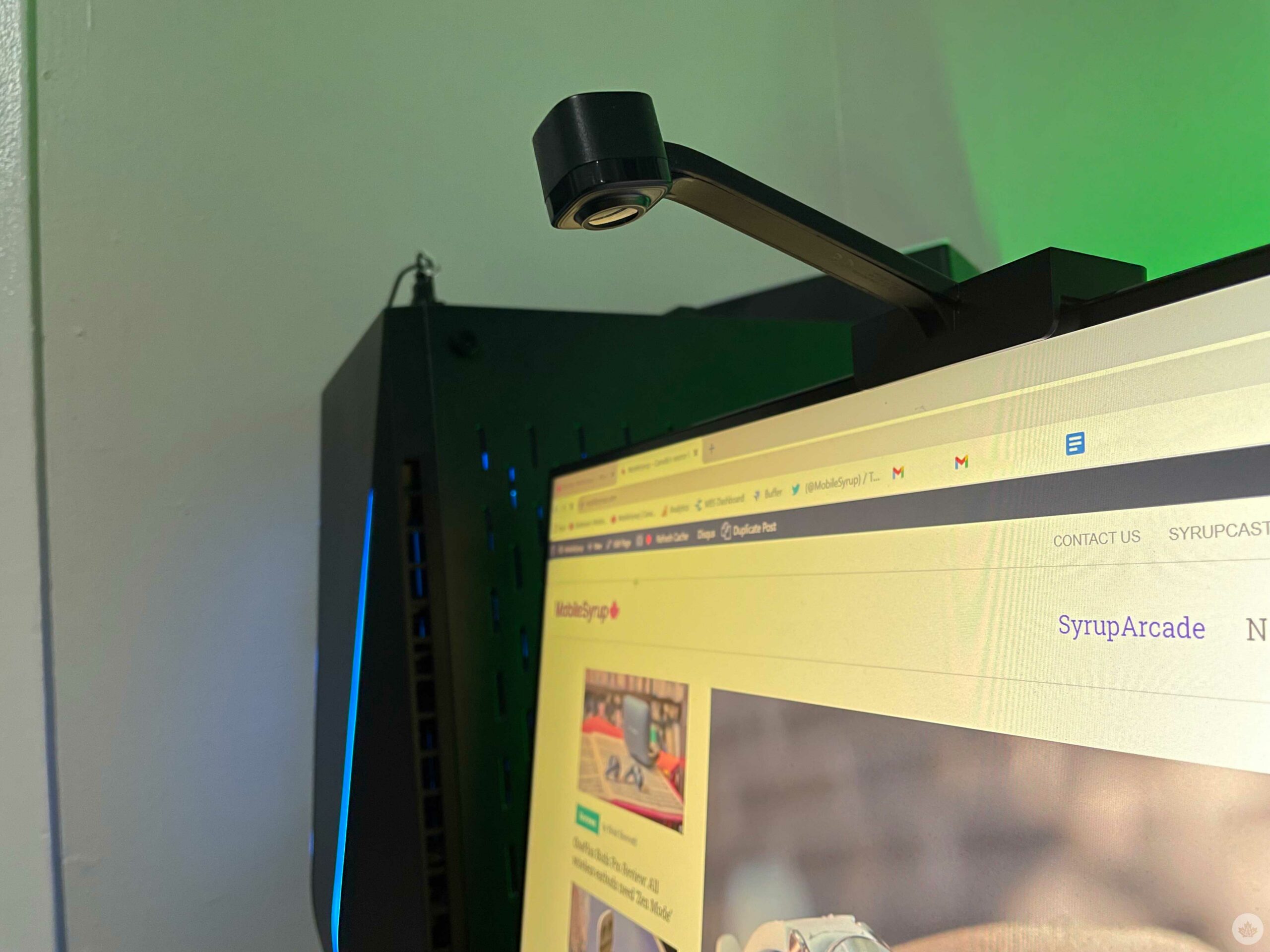 Another issue I have with the camera is that it sits exactly where my webcam would. However, this shouldn’t be an issue if you intend to use the lights with your TV.

With privacy concerns out of the way, let’s talk about the Video Mode.

While the Flow Pro is capable of displaying several colours on each bar, as it has six different customizable sections per bar, Video Mode only shows one solid colour instead of a gradient. 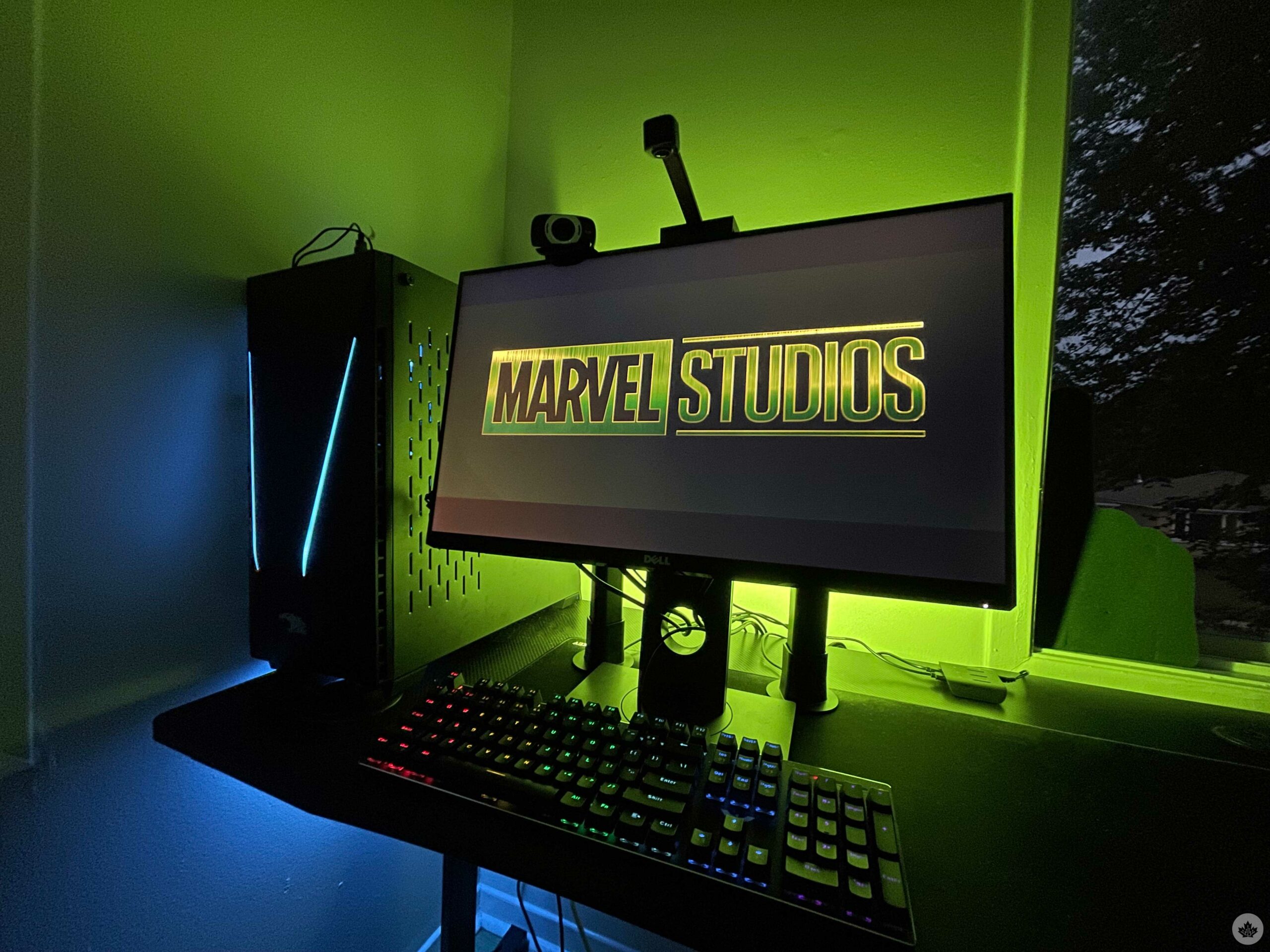 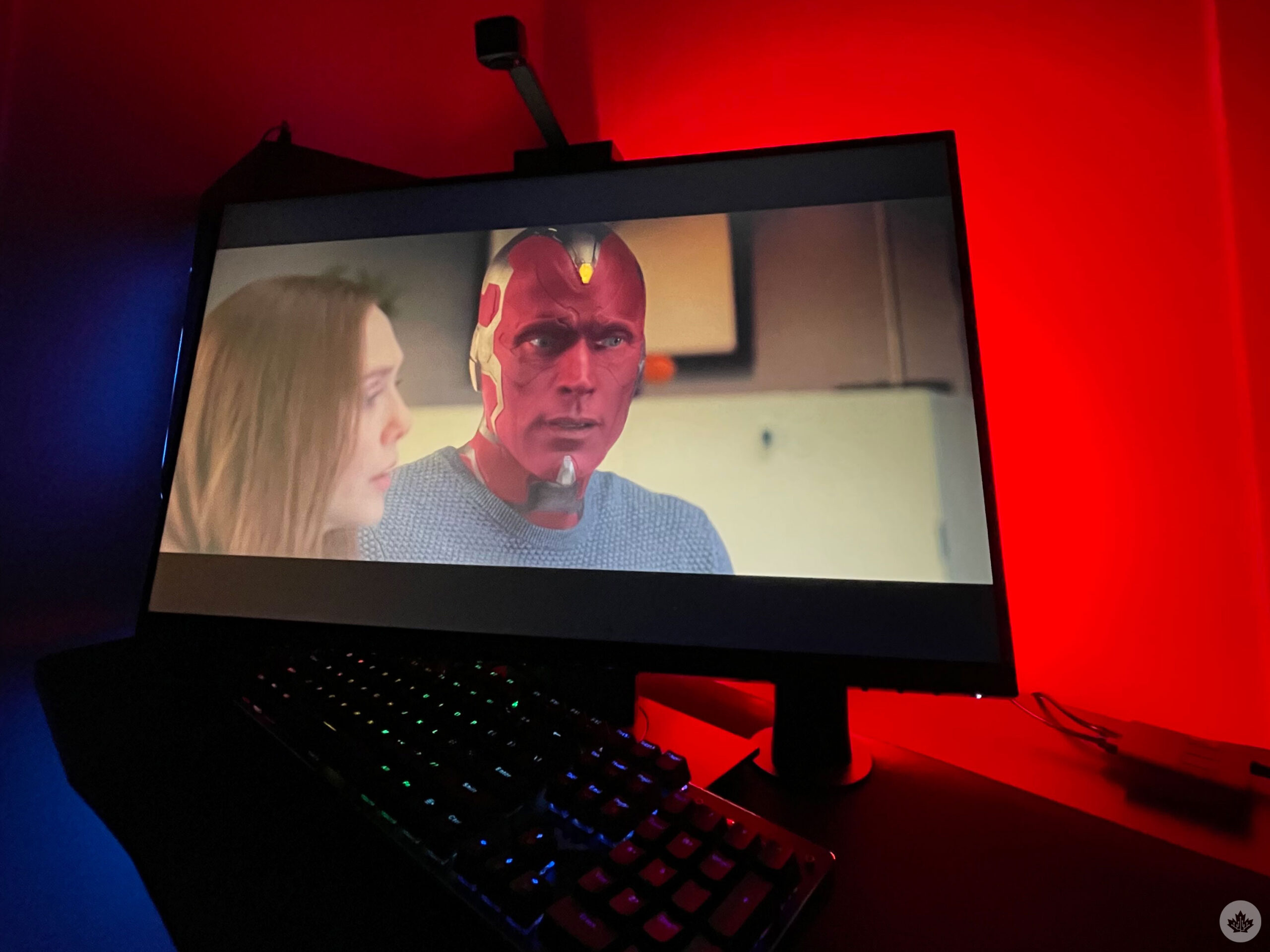 Further, if you’re in a bright room, or you have light reflecting off your display, the camera will generally just pick up white or yellow as the dominant colour.

While it does add an aesthetic element to your setup, the inconsistency in the light mimicking was distracting while gaming, and I found myself setting the light to a solid colour for the entirety of the game to increase contrast.

Lights out for Govee Flow Pro?

While the Govee Flow Pro Light Bar isn’t suitable for gaming, I found the lights to be visually delightful while watching movies or a show. Even though the camera only picked up the most dominant colour on the screen, it still provided an immersive experience that’s better than having a consistent solid colour or random rotating colours.

The Control Box has a solid signal receptor, as I was able to change modes and scenes from two rooms away. The Alexa and Google Assistant voice support is also a plus. 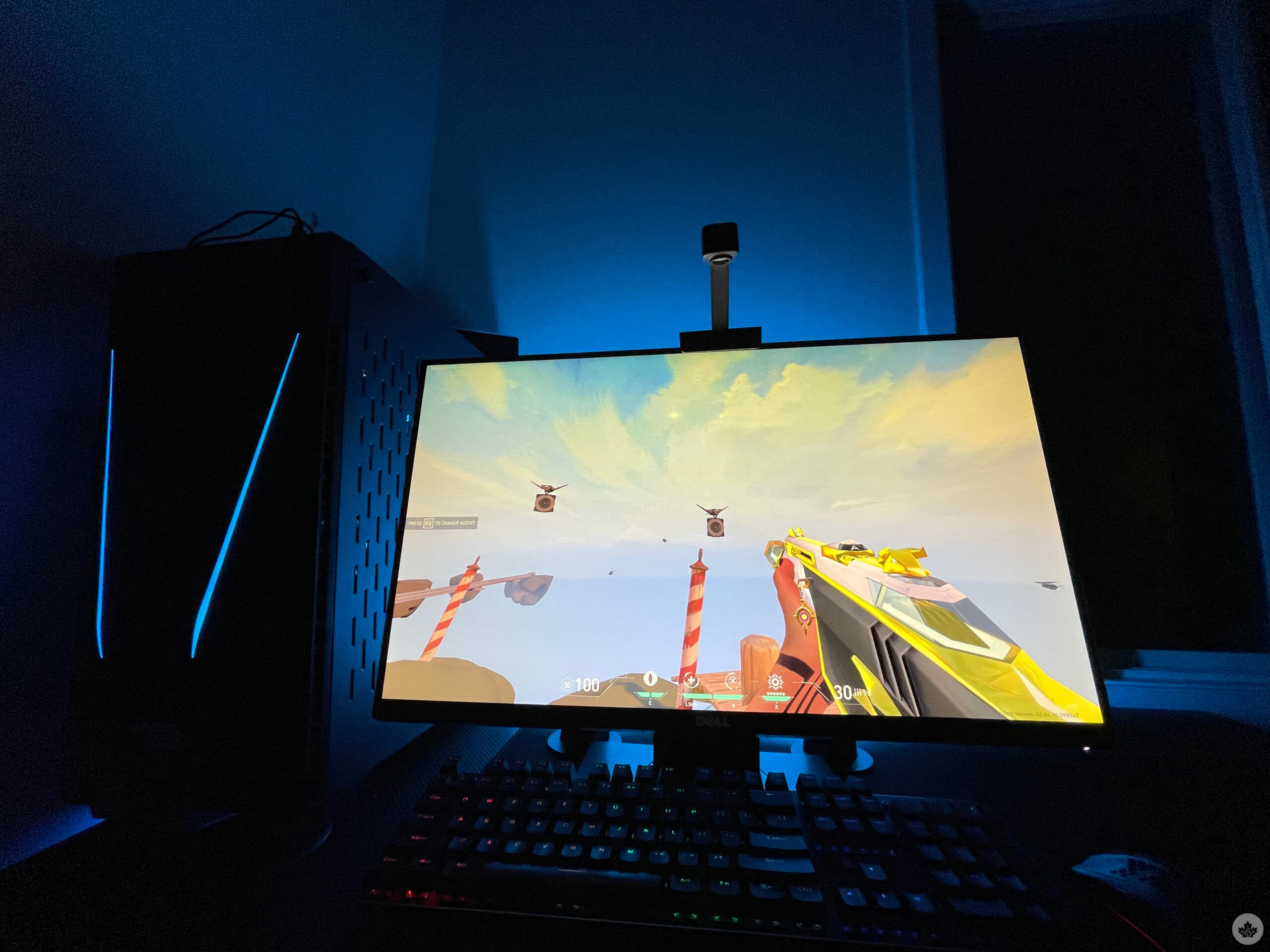 The app itself is easy to use and doesn’t have any noticeable glitches or bugs, though it might take you a while to discover all the controls and options it has to offer.

Aside from some minor hiccups with the Video Mode and the camera, the Govee Flow Pro Light Bar is a solid customizable lighting system that will — literally — brighten up your gaming or TV setup.