Ratchet & Clank: Rift Apart looks to be the perfect PS5 game for everyone

Even if you're a relative series newcomer like me, Insomniac's latest "Ratchet" game is incredibly exciting 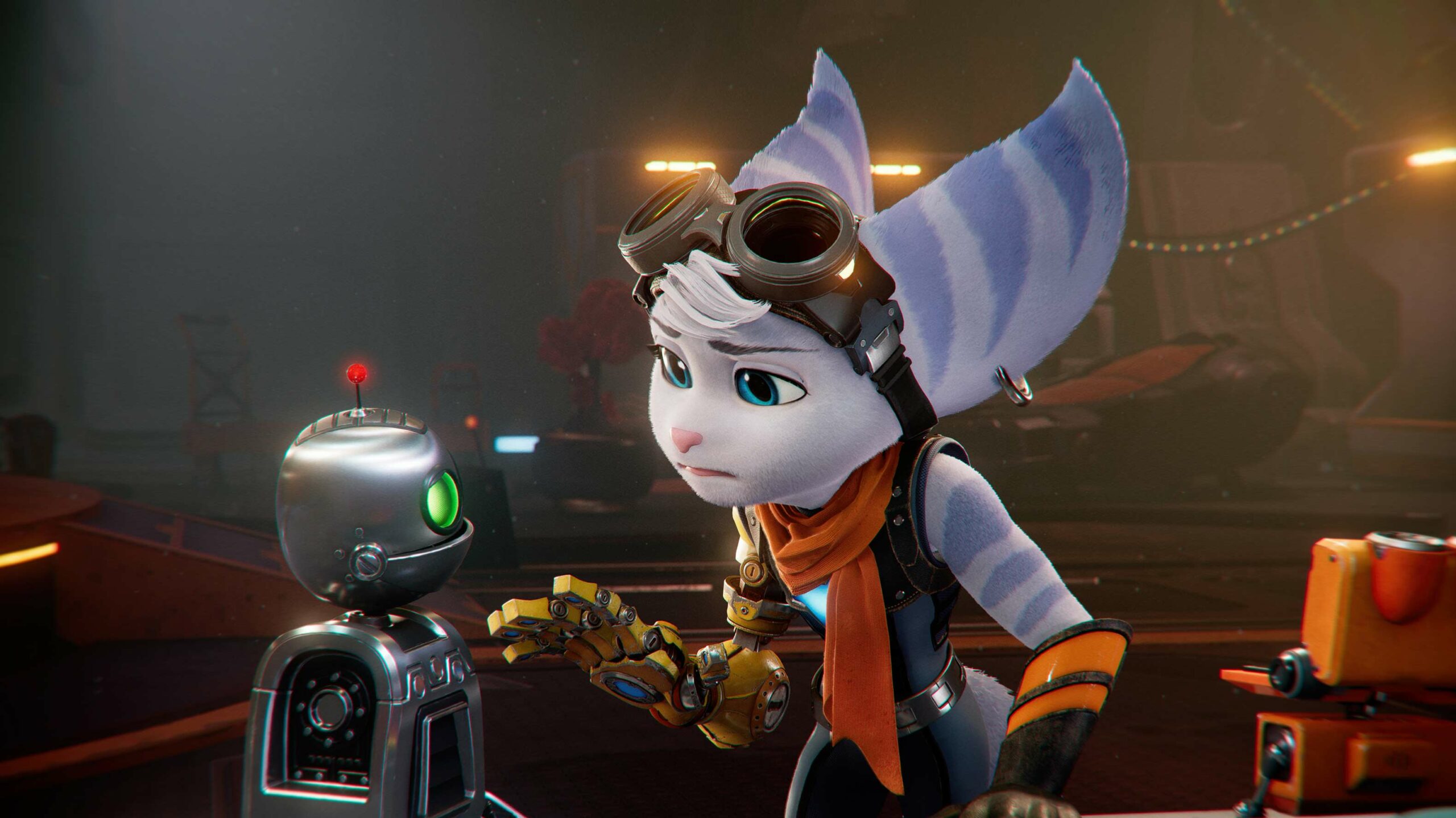 Because I didn’t own a PlayStation 2 or PlayStation 3 until later in their respective lifecycles, I never ended up playing much of the Ratchet & Clank series, outside of 2016’s great movie tie-in/re-imagining of the first game on the PS4.

However, I’ve found myself really excited for Insomniac’s latest entry in the series, Rift Apart, which is one of the few big PlayStation 5 exclusives so far.

The game already looked quite impressive during each of its showings over the past year, but after attending a recent virtual preview event with Insomniac, Rift Apart has — to my pleasant surprise — become my most anticipated 2021 release. 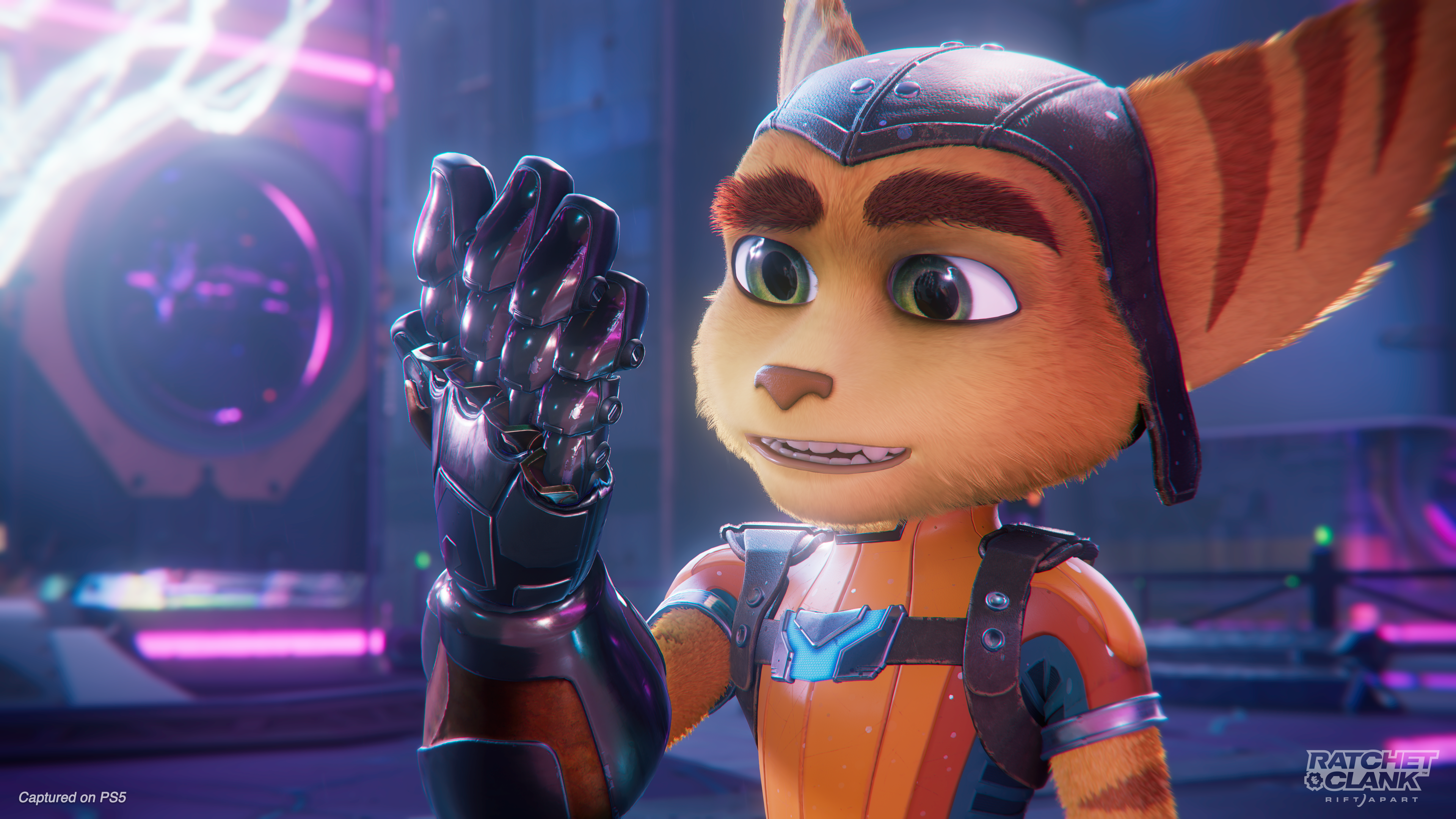 Right off the bat, Rift Apart wows you with its stunning production values. In native 4K, you can see the individual hairs on the fur of returning hero Ratchet and newcomer Rivet, which Insomniac says will blow in the wind and can even get wet and clump up. Clank, meanwhile, has all kinds of realistic reflections on his metallic body thanks to the PlayStation 5’s ray-tracing. It all looks like something you’d see out of a Pixar film.

“As someone who has minimal experience with Ratchet & Clank, I appreciate just how much Insomniac seems to be making Rift Apart a good entry point for newcomers”

That’s to say nothing of the environments. You might have seen in previous trailers just how jam-packed areas are, like the bustling metropolis filled with flying spaceships, fleeing civilians, luscious greenery and enemies popping in and out through wormholes.

“While the Ratchet and Clank franchise is not considered open-world, in Rift Apart we’ve set up almost all of the planets to constantly stream content in and out as you move through them, just as an open-world title like Spider-Man would. This is despite the fact that [the playable areas] of our planets are smaller than the island of Manhattan,” said Mike Fitzgerald, Insomniac’s core technology director, in a media briefing attended by MobileSyrup. 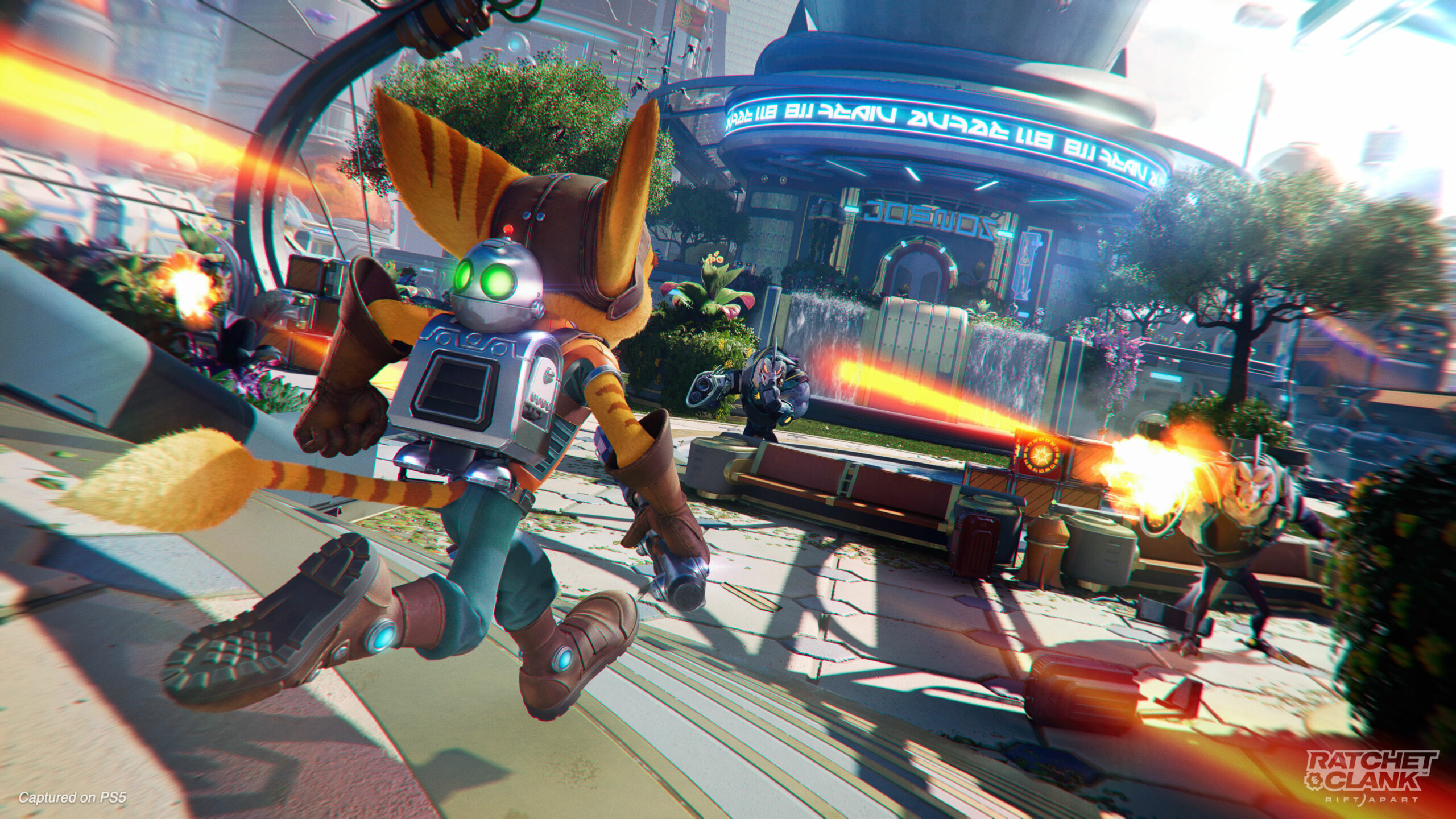 “This means we can get a much higher density of art content in all different corners of the world and we’re not locked to small palettes of textures and objects in each area. This makes it easy to, say, drop a giant robot down from a whole different planet.”

On the merits of its presentation alone, Rift Apart seems more than worth your time as a PS5 owner. But of course, there’s much more to the game.

As someone who has minimal experience with Ratchet & Clank, I appreciate just how much Insomniac seems to be making Rift Apart a good entry point for newcomers. Since the 2016 game wasn’t canon, Rift Apart picks up after 2013’s Into the Nexus, which ended with a tease that Clank has a way to help Ratchet finally locate the rest of the Lombax race. But if you’re like me and that doesn’t really mean anything to you, Insomniac promises that it’s got you covered. 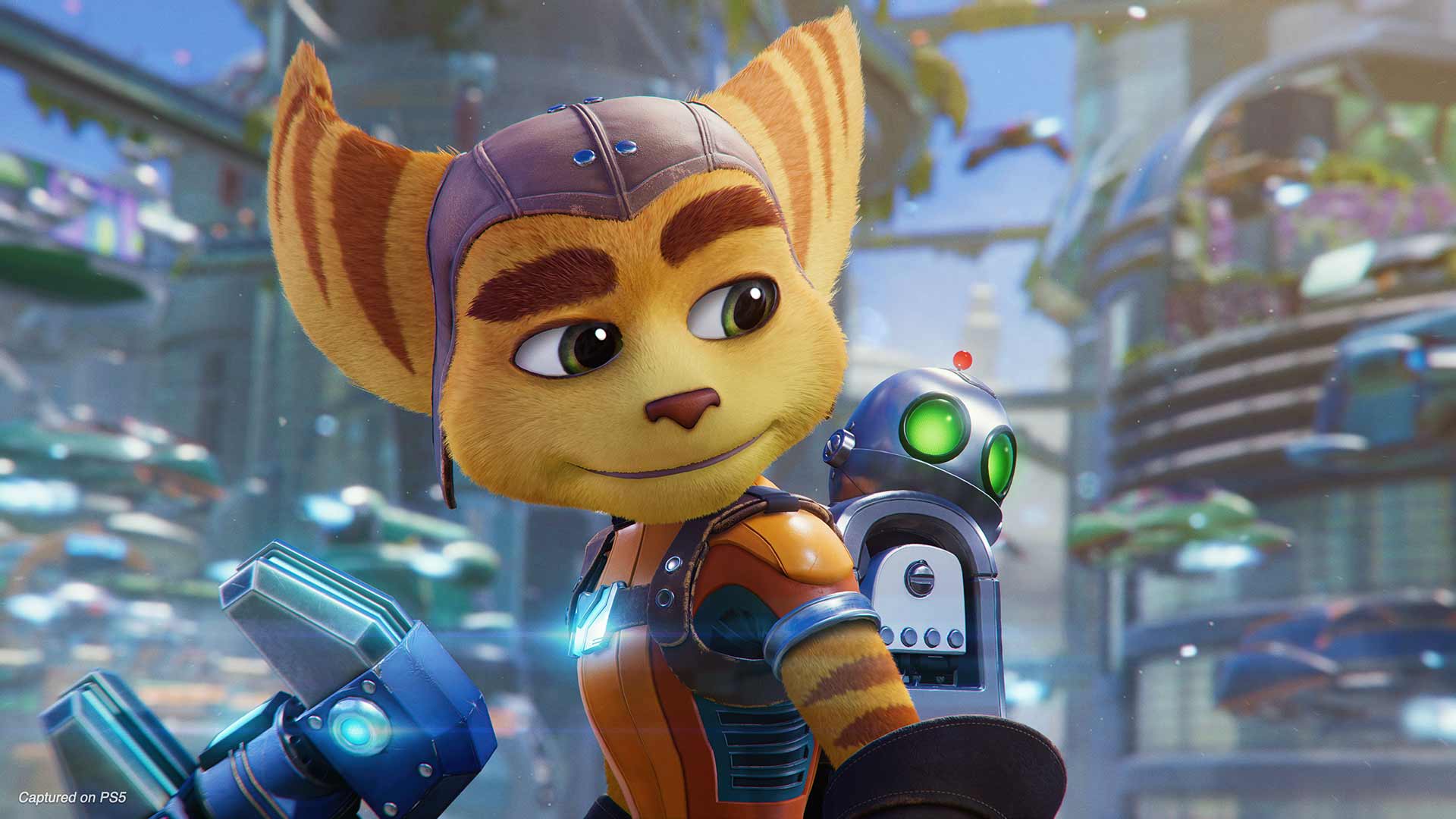 “In a Rift Apart, we want to answer those questions as well as provide plenty of nods to games past. But for new players who don’t know what any of those words that I just said even mean, that’s ok — you don’t have to, and you shouldn’t have to,” explains Lauren Mee, lead writer on Rift Apart. “After all, at its core, Ratchet & Clank tells stories that are super universal — they’re about family or friendship or heroism, or, in the case of our story, a mixture of all three. While we’ve made sure to honour the past, we were very careful about keeping things simple when moving into the future.”

This approach is on display in two key ways. First, Ratchet and Clank themselves become separated in the game, leading the Lombax to scour the multiverse to find his robot friend. Immediately, this should give the player an easy narrative hook — we can all sympathize with Ratchet here — while bringing you to colourful new alien planets. The multiverse approach also allows Insomniac to offer some fun twists on long-running characters — like hoverboard champion Skid McMarx being a resistance fighter named Phantom in another dimension — to let both fans and newcomers alike make discoveries along the way. 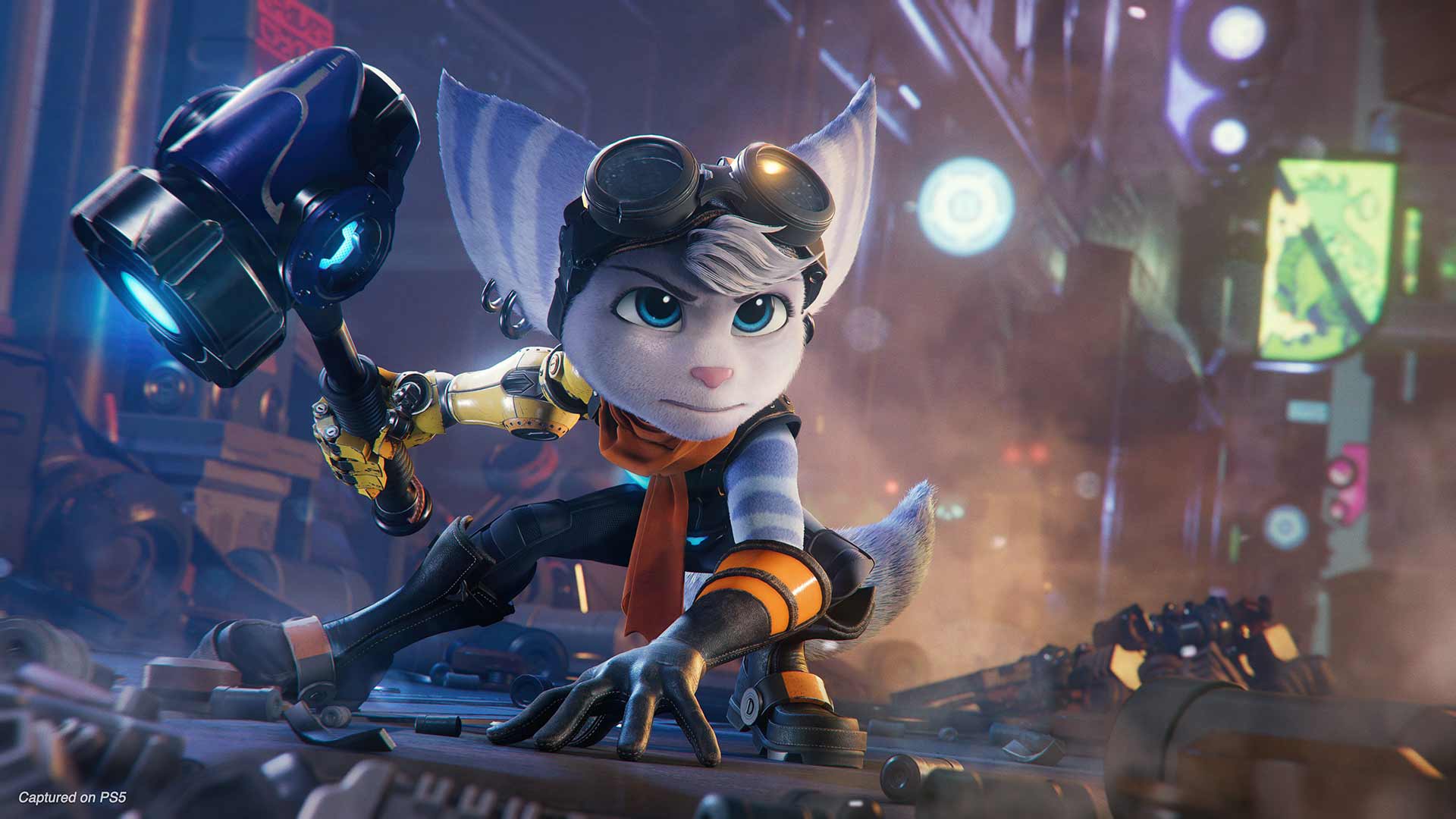 But the biggest way Rift Apart feels welcoming to all players is through the addition of Rivet. As Ratchet’s dimensional counterpart, she’s been fighting a solitary battle to survive in a world where Dr. Nefarious — the longtime Ratchet & Clank villain — has finally won and become ruler.

“Rivet was a labour of love for all of us — she was an opportunity to create a new hero from one we’ve already known for so many years,” says Lindsay Thompson, Rift Apart‘s senior cinematic animator. “We thought about the strong, quirky characters that have inspired us along the way. We asked, ‘what has her life as a lone wolf in a dangerous world made her into?’ Who is she at her heart?’

Thompson noted that Insomniac was careful not to depict Rivet as “cynical, dark or cruel” despite her trauma, and has instead made her “scrappy, independent and definitely a little bit of a smartass.”

This was all on display in the gameplay demo I saw in which Rivet made quite the impression, particularly thanks to Canadian actress Jennifer Hale’s lively performance. There was a lot of fun banter to be had as Rivet made her way through a canyon stretch, be it her smug dismissals of enemies’ taunts or her quieter moments with Clank, who she affectionately calls “Bolts.” In one scene, a giant robot enemy tells Clank that he must “accept his brokenness,” to which Rivet sweetly replies “don’t listen to him, Bolts — if you’re broken, so am I, and I think we’re pretty awesome!”

Of course, Ratchet and Rivet will also come into contact eventually, and while I didn’t see any of their encounters, Mee teases that “her introduction basically teaches [Ratchet and Clank] something about themselves, and they definitely teach her something about herself.”

Of course, it helps that Rift Apart just looks like such a blast to actually play. In the demo I saw, Rivet and Clank face off against a variety of delightfully quirky robo-pirate enemies, and this is where the game’s gorgeous particle effects and Insomniac’s signature zany and inventive weapons really come to life.

With respect to the latter, Insomniac says it’s leveraging the tech — particularly the DualSense controller — to make guns feel more over-the-top and responsive than ever. With the DualSense’s adaptive triggers, Insomniac can actually add multiple firing functions to a gun based on the amount of pressure you put to them, similar to what Housemarque did in Returnal.

“[For example,] the Enforcer is a double-barrelled shotgun and the player can decide whether to fire a single barrel or both barrels depending on how far they pull the trigger down,” notes Adam Noonchester, lead gameplay designer and weapon development lead on Rift Apart. “Not only does it fit a strategic niche of being a good close-range weapon, but the dual trigger functionality allows the player to choose whether they want to focus on crowd control or dps [damage-per-second].

Noonchester notes that the PS5’s rapid SSD — which is also powering the game’s cross-dimensional setpieces which feature characters leaping through different levels seamlessly — helped the team get even more creative with the guns.

“One of the things that maybe isn’t immediately obvious — we’ve shown the Topiary Sprinkler in past videos, and that’s the gun that will turn enemies into plant statues of themselves. And to hit that quality bar, we actually generate these plant models with every single enemy, and they’re very dense in terms of textures and verts,” he says. 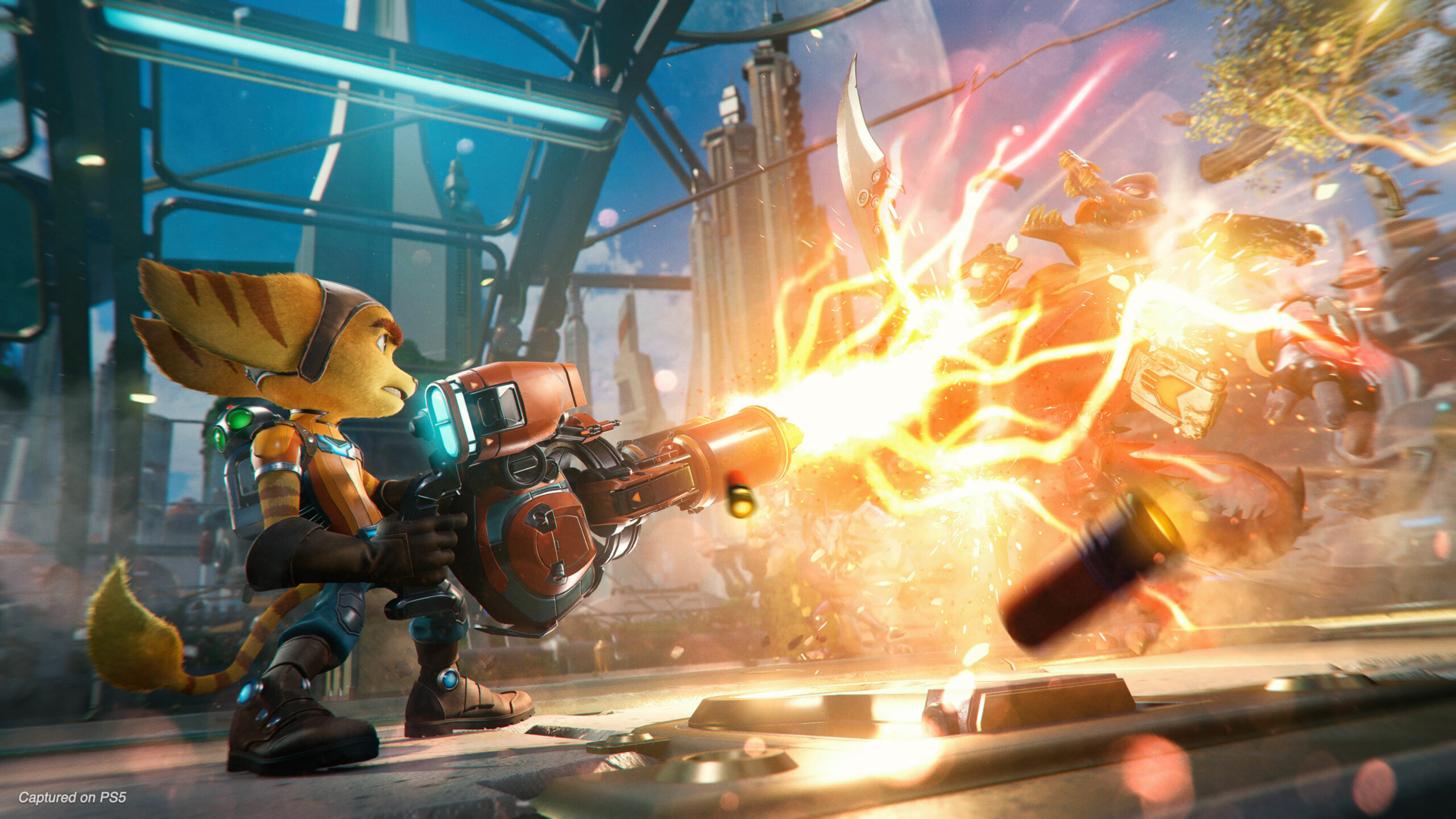 “Before the PS5, we would have to reserve a lot of memory for all of these topiary models to sit around. But with how fast the SSD is, we don’t actually load one of those models until the frame before a guy gets affected by the Sprinkler. And then we stream that in for as long as he’s ‘Topiary-d’ and this allows us to do a weapon that we would have had to make compromises in elsewhere in order to support in the past.”

“In certain combat encounters, Ratchet/Rivet can also use a “Rift Tether” to pull themselves towards a higher or farther area”

The Topiary Sprinkler was definitely the highlight for me among an overall gloriously diverse lineup of weapons. Seeing Rivet’s robotic foes of various sizes get immediately covered in thickets of grass which all fly off in different directions after being blasted by a different gun was an incredibly cool effect, on top of being a smart means of dealing with tougher enemies.

I’d be remiss not to mention other fantastic-looking weapons, like the Negatron Collider (a Mega Man-like arm cannon that shoots penetrating beams), the Void Repulser (summons a pink shield that you can shatter to repel enemies) or the Ricochet (a metal ball that can deal continuous damage by, to add insult to injury, repeatedly bouncing on the enemy’s head). 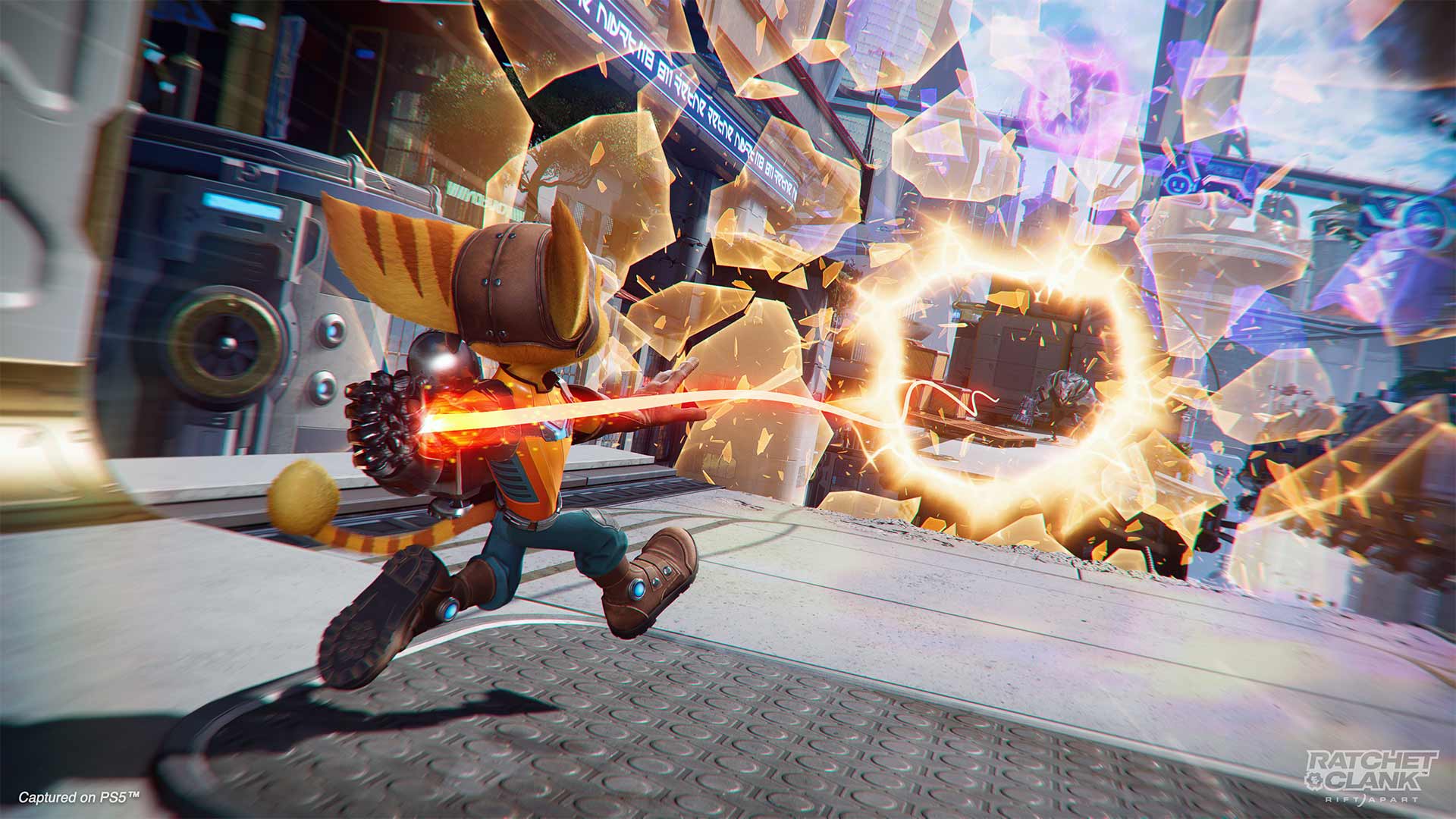 In certain combat encounters, Ratchet/Rivet can also use a “Rift Tether” to pull themselves towards a higher or farther area, — a clever strategic play to avoid getting swamped and come up with a new plan of attack. This, combined with her handy hover boots, afforded Rivet a good deal of mobility during hectic shootouts. Rifts extend to exploration, too; in one instance, Rivet was able to take a detour through a portal — which occurred instantly thanks to the SSD — to find some loot.

The demo concluded with a thrilling, almost Uncharted-esque setpiece in which Rivet grinds, jumps, wall runs and Rift Tethers her way through the crumbling mountainside as the aforementioned giant killer robot tries to snag her with laser beams and his giant metal hands. The sense of scale here was staggering, which Insomniac says will only feel enhanced when you actually play it through 3D Audio — to let you hear the air whiz by Rivet as she’s propelled through the air — and the unique haptics of the grinds, crashes, explosions and the like.

All of this is to say that I’m all on board for Rift Apart, and it can’t get here fast enough.