The Galaxy Book Pro is a surprisingly nice laptop, but may have some build-quality issues 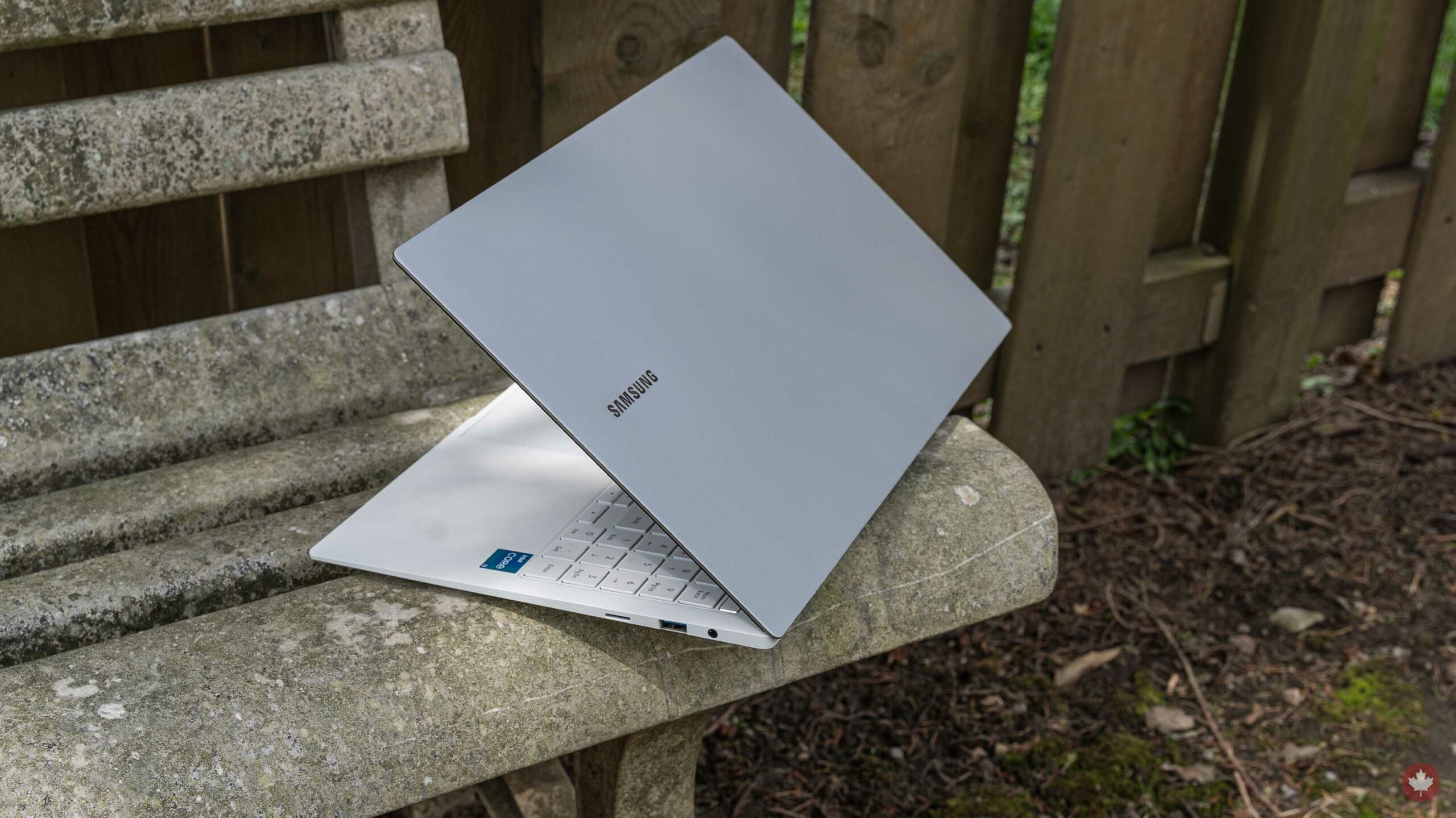 Samsung has offered laptops for a while now, but only recently brought them back to Canada. The company just announced its 2021 line-up of Galaxy Book laptops, including the Galaxy Book, Book Pro and Book Pro360 — you can read about those here.

Alongside the announcement, I got the opportunity to test out a Galaxy Book Pro for a few days. While this isn’t a full review, my first impressions of the laptop are generally positive. In my short time with the Book Pro, I found it to be stylish and a cut above some other Windows laptops, but there are some concerns worth noting as well.

On the one hand, the Galaxy Book Pro is impressively thin and quite light. I can see it being a great option for someone who travels or works on the go — it’s an easy laptop to carry around. At the same time, I encountered some minor build quality issues that have raised concerns about the device, although nothing drastic.

Concerns aside, the Galaxy Book Pro offered a solid experience over the few days that I tested it, and I think it could be a contender for one of my favourite laptops of the year. 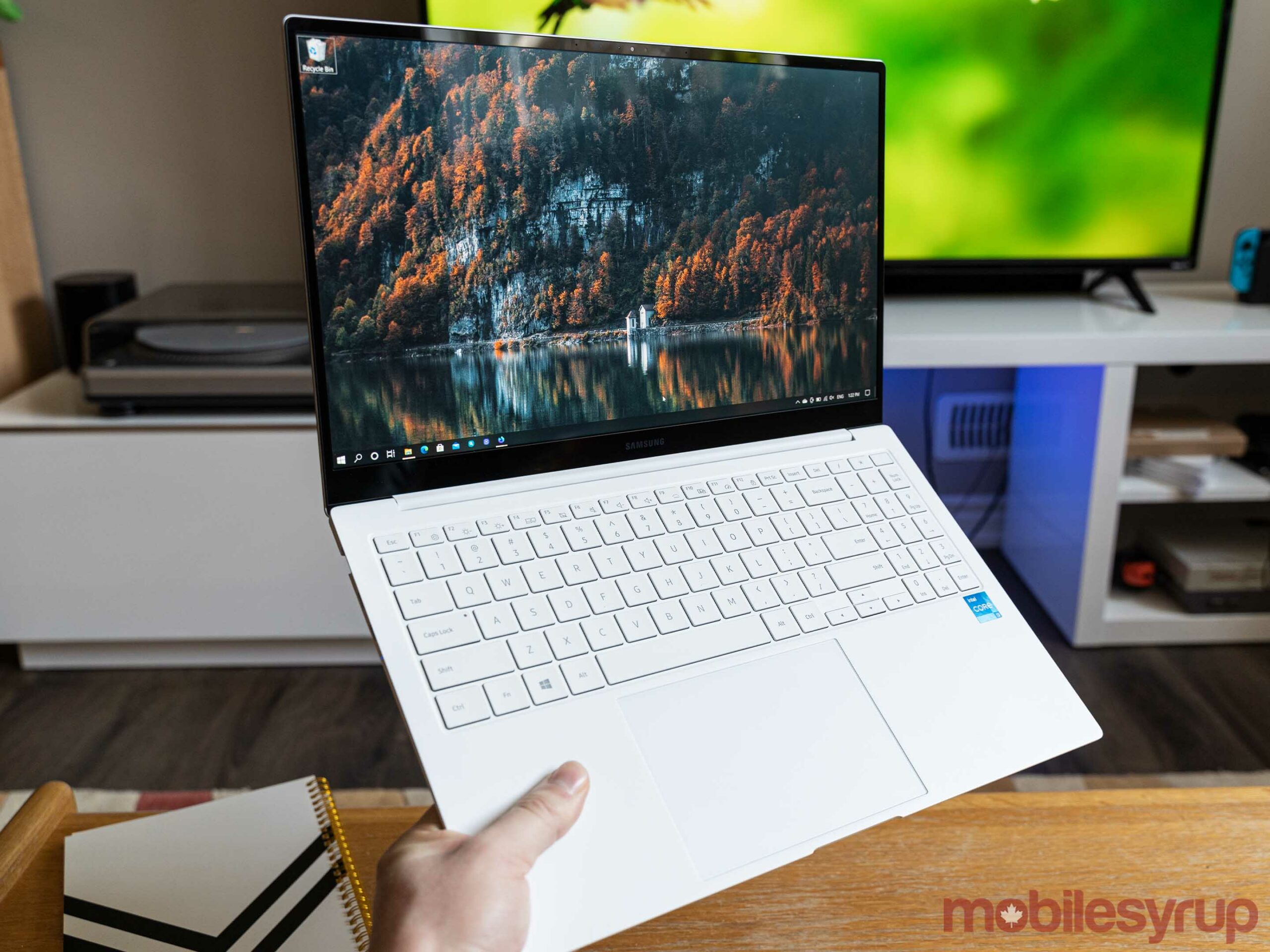 The thing that struck me first about the Galaxy Book Pro was just how thin and light it was. Measuring in at just under 12mm thick on the 15.6-inch model I tested and weighing 1.05kg (2.31lbs), the Book Pro is definitely on the thinner and lighter side.

Despite that, Samsung didn’t make the typical sacrifices you see from laptop manufacturers chasing thin-and-light designs. Port selection remains stronger than most, with USB-C, USB-A, HDMI and MicroSD all available. Samsung did note that the dimensions were too small for a full SD card slot, but considering how many more ports the Galaxy Book Pro offers compared to similarly-sized Windows laptops, I can forgive that.

Likewise, Samsung didn’t skimp on the keyboard or trackpad. While not my favourite typing experience, the Book Pro’s keyboard was far from the worst I’ve ever tested. I prefer my keyboards to have a little more travel and a clicky, tactile feel — the Book Pro’s keyboard was shallow and not particularly clicky. Still, it worked fine. Plus, the company squeezed in a number pad, which is a welcome addition. 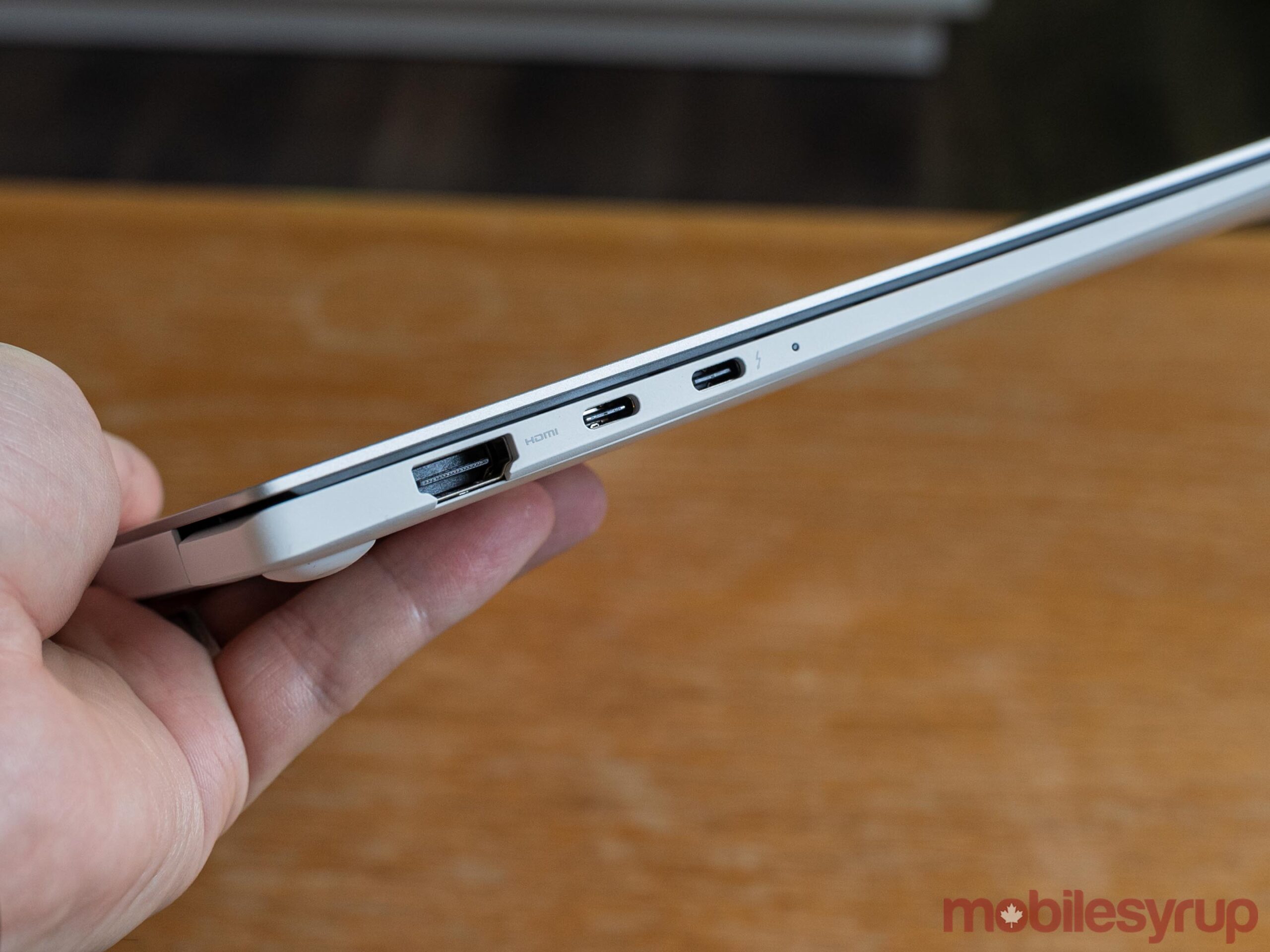 The trackpad is impressively large and has a satisfying, tactile click to it. It also felt really responsive — overall, I was a fan, although it had some issues (we’ll get into that more below).

My only real gripe with the design was the colour — the Book Pro I tested was Mystic Silver, but the ‘Silver’ part only applies to the lid. The rest of the laptop is white, except for the glossy black bezel around the display. Although the white looks nice, it seemed to pick up dirt really quickly in my time with it — if you’re not sure you can keep your laptop looking clean, you may want to go with another colour.

Performance isn’t bad, but you may want to go with the i5 model 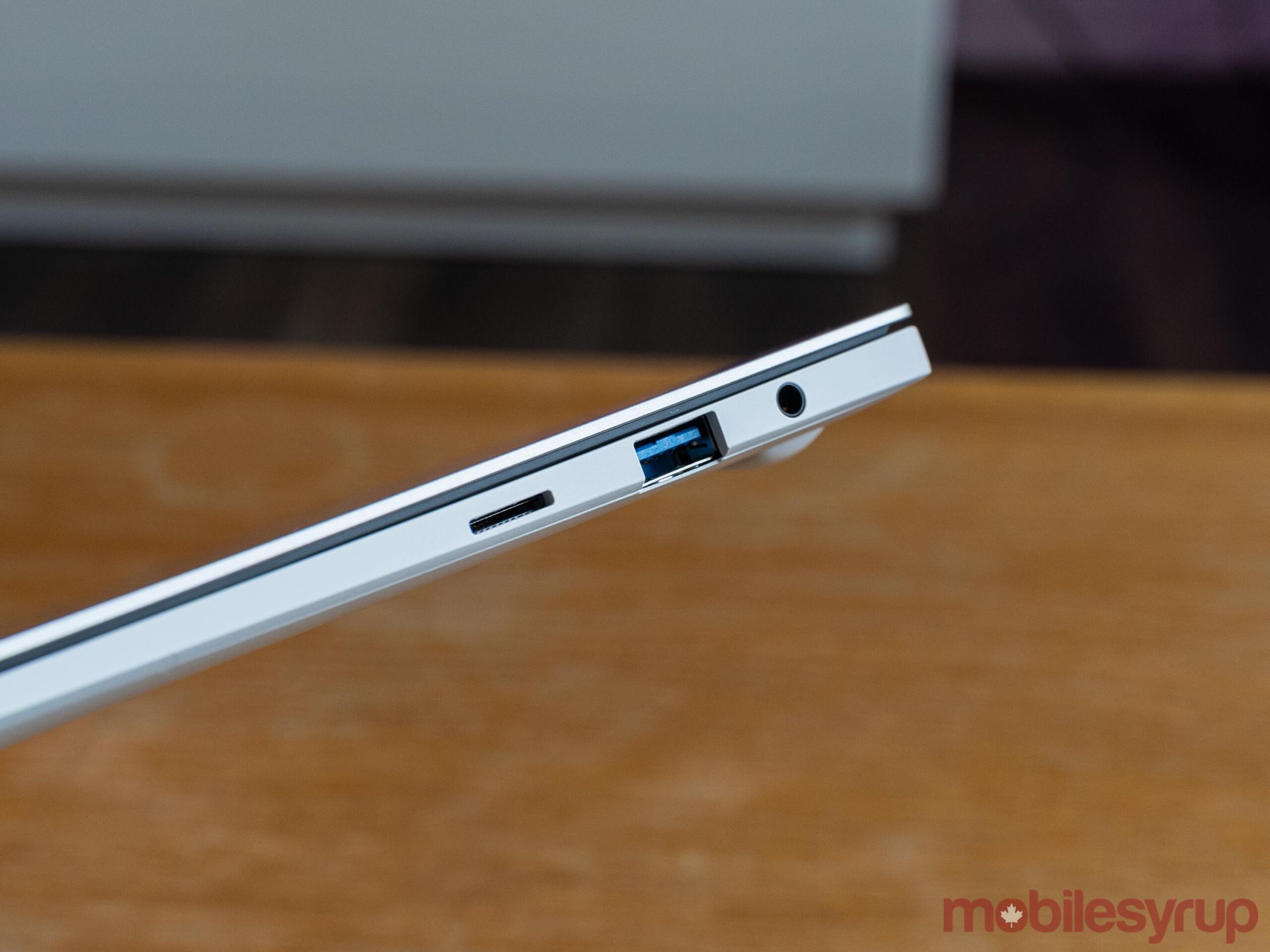 Although I didn’t get to put the Galaxy Book Pro through more difficult testing, I found performance overall on the Intel i3 model with 8GB RAM I tried was decent. The i3 definitely didn’t blow me away and I encountered a few issues with jitter and lag that I think one of the more powerful configurations may have handled better.

Having just reviewed the LG Gram (2021) and Lenovo ThinkPad X1 Nano, both of which offered 11th Gen i7 chips and exceptional performance, I’m sure the similarly equipped Book Pro would equally impress.

At the same time, it all comes down to what you plan to do on your laptop. The i3 will likely be fine for people planning to do some light web browsing and word processing. However, in my testing with just running a web browser, I had a few instances where the laptop got bogged down.

On the flip side, I found the i3 offered solid battery life. My experience with Intel’s 11th Gen chips in laptops so far has generally been positive on the battery life side, and the i3 is no exception. I found the Book Pro regularly lasted almost to the end of my typical 9-to-5 workday. 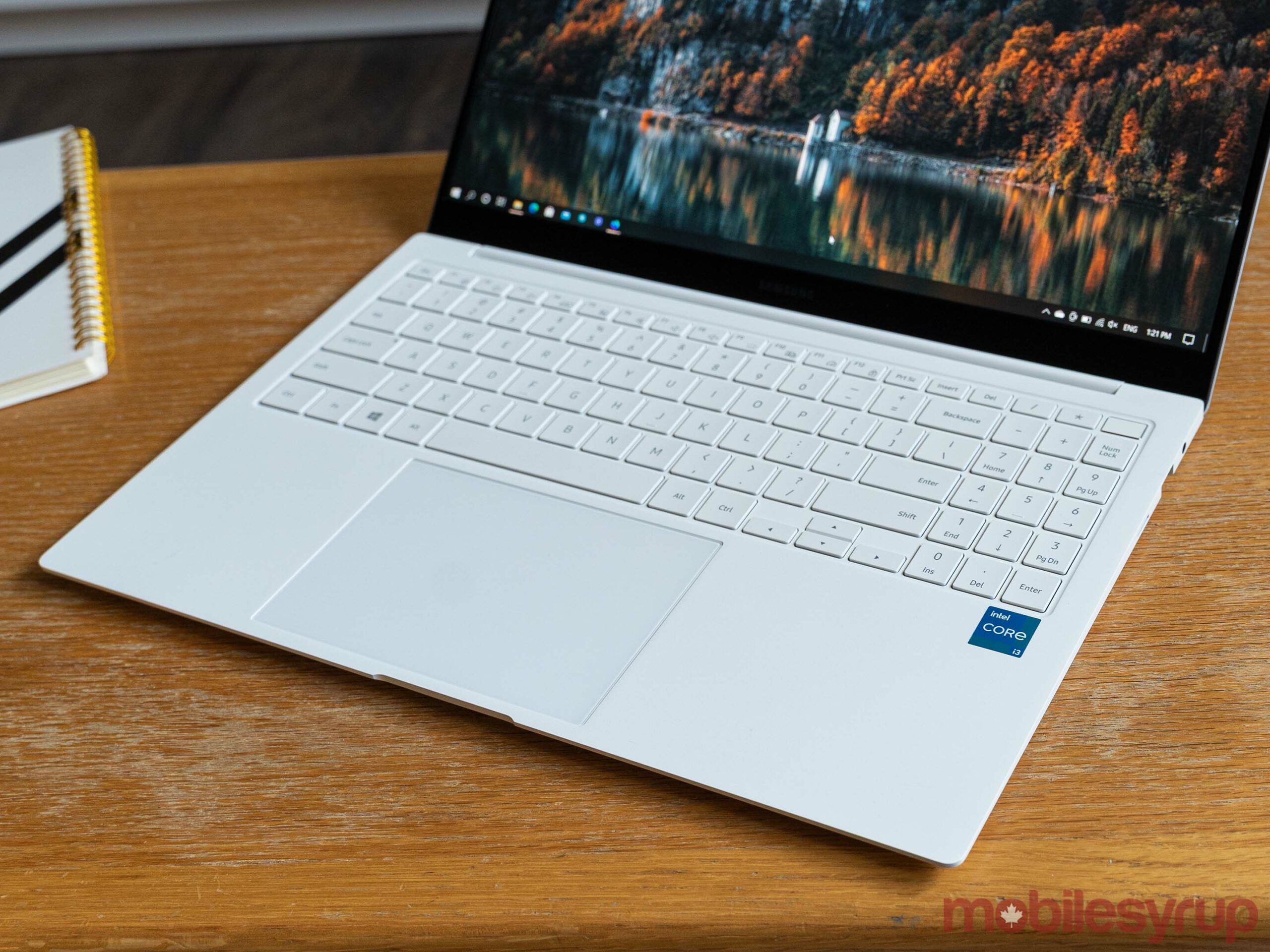 It’s also worth noting that the Book Pro can get a bit noisy with its fans. I generally didn’t have any issues, but periodically under a heavier workload, the laptop’s fans revved up and could get quite loud.

Surprisingly, the display was also mediocre. I expected better from Samsung, which makes some of the best screens I’ve seen on smartphones. However, when it comes to the Galaxy Book line, the only option across the board is 1080p. While there isn’t anything wrong with 1080p, it’d be nice to see higher resolution options, especially for the larger 15.6-inch display. Moreover, I found the Book Pro I used made certain elements on the screen, like text, really fuzzy. I corrected this to an extent by calibrating text using Microsoft software, but it never fully resolved the issue.

I don’t think the problem is related to screen resolution, in part because the text on other 1080p screens I use still looks sharp — the Book Pro should be able to achieve the same quality on its screen, but doesn’t.

Minor build quality concerns could be a deterrent 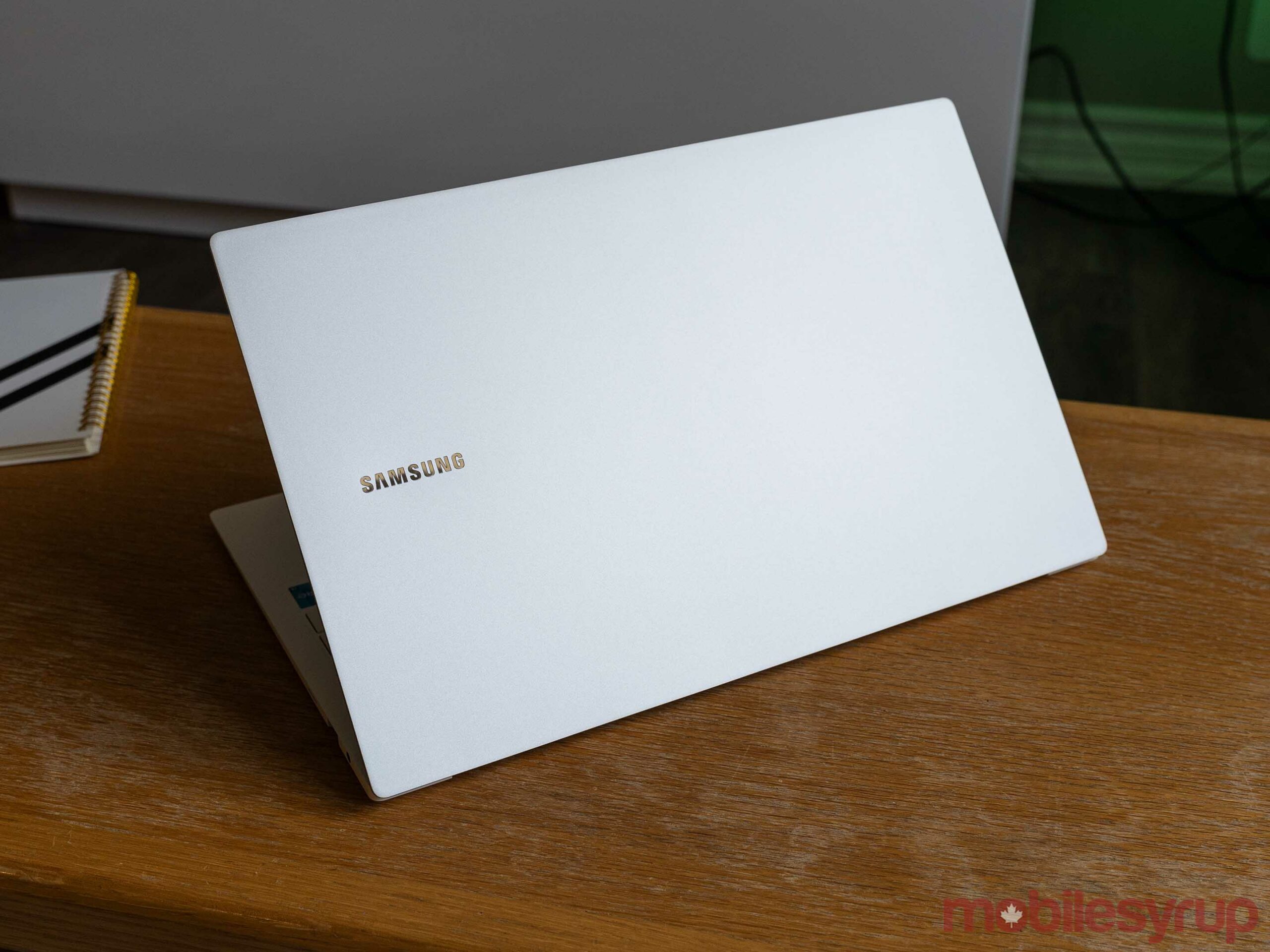 In my short time with the Galaxy Book Pro, the only real problems I experienced were with the fingerprint scanner and trackpad.

Likely, the issues were because of a software glitch or bug, which I suspect was fixed by one of the updates I installed. I wouldn’t worry too much about that, although it’s worth being aware of.

The other, more significant issue I encountered was with the trackpad sticking. Sometimes when clicking the trackpad, it would get stuck in the ‘clicked’ position and continue registering a click even after removing my finger. Although the trackpad didn’t get stuck permanently, it happened enough that the issue became quite frustrating.

I’m not sure it’s a big enough problem to warrant avoiding the Galaxy Book Pro in general, but again it’s something worth being aware of.

There’s also a bit of flex on the keyboard, which can be annoying when typing. However, the flex in the Galaxy Book Pro isn’t nearly as bad as some other laptops.

A few other things worth noting 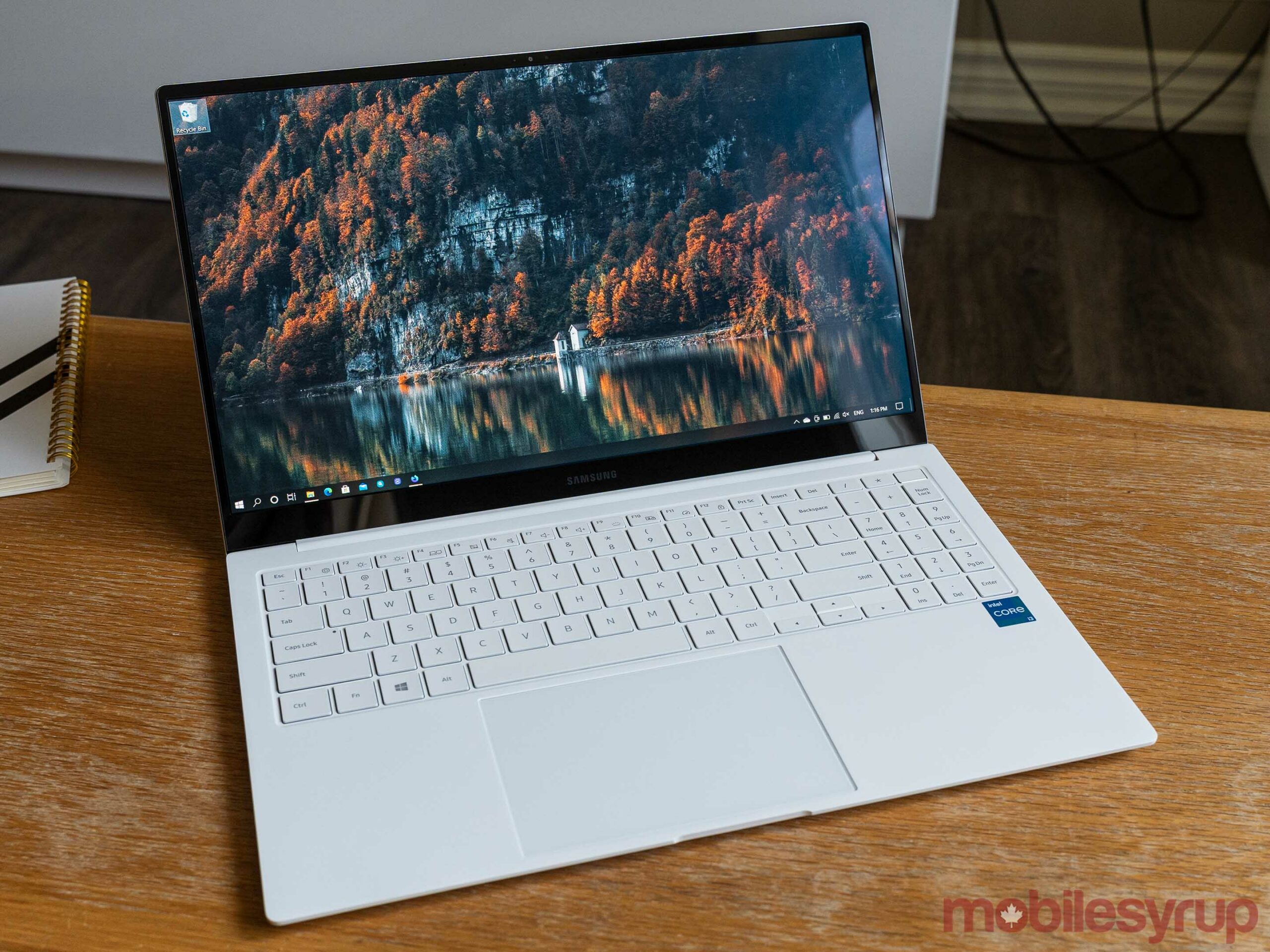 Finally, the Galaxy Book Pro I tested was missing a few things. For one, Samsung indicated that it would roll out cellular models of some of the Galaxy Books in the future. The Galaxy Book Pro 360, for example, will have a 5G model once Samsung gets certification from Canadian carriers. The company also hinted that the Book Pro would get an LTE variant, but not 5G.

If that’s something that’s important to you, you may want to wait on the Galaxy Book until those cellular models become available.

Another consideration is pre-installed software. On the one hand, Samsung noted some software features, like ‘QuickShare’ and ‘SmartThings,’ wouldn’t be available until May, so I wasn’t able to test them out myself.

On the other, the Galaxy Book Pro already has a lot of pre-installed software, which may not be a welcome addition for some users. By my count, there were over 15 Samsung apps installed on the device, and many of them aren’t necessary or duplicate existing Windows 10 features. 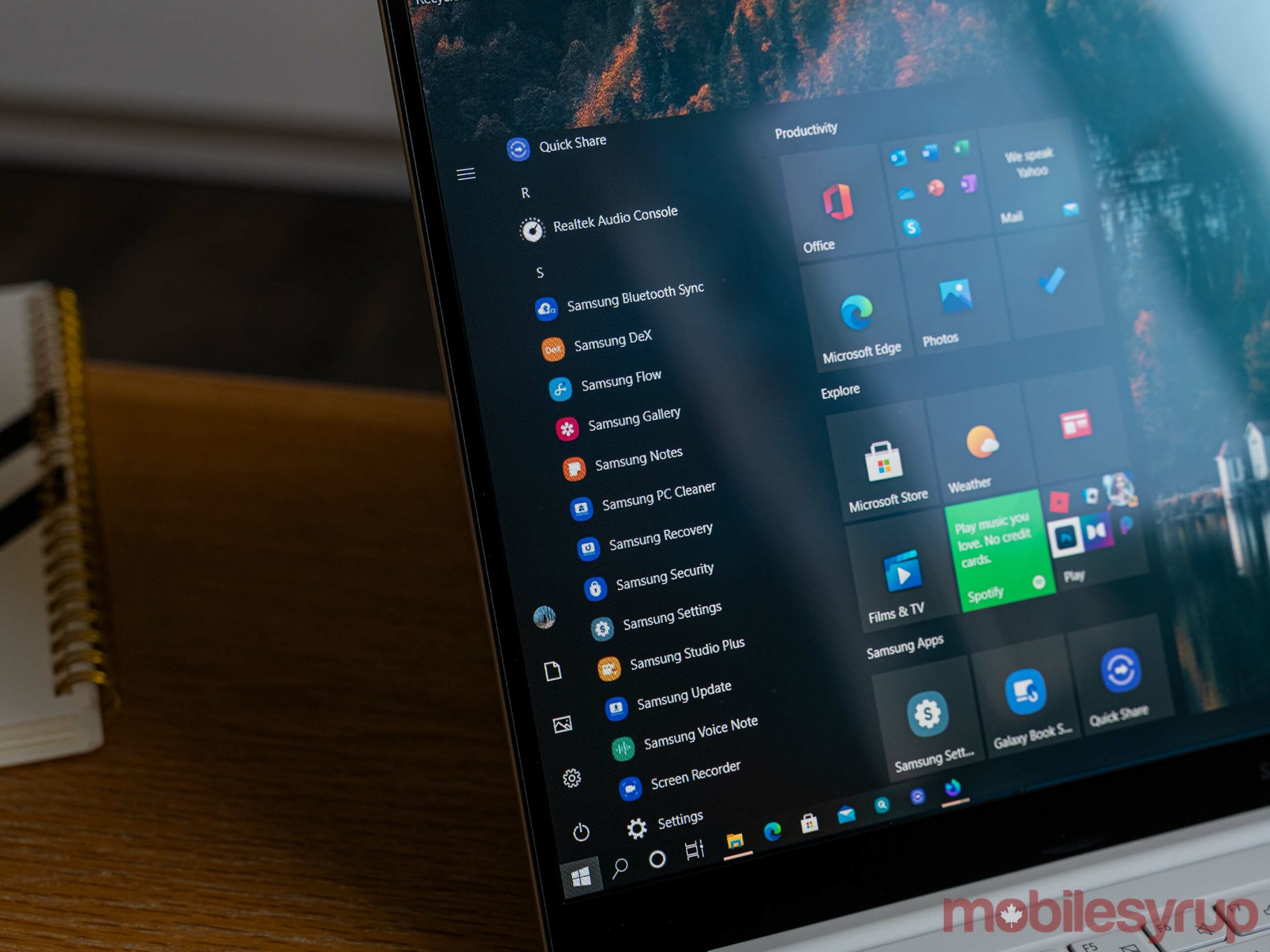 Just a few of the pre-installed Samsung apps

For example, Samsung’s ‘Quick Search’ app does the same thing as the built-in Windows search.

Other apps will likely be great options for people who like to connect their smartphones with their computer — especially if you own a Samsung phone. There were several pre-installed apps designed to bridge the gap between phone and laptop with sharing and sync services for things like messages, data, images and other content. Some people will likely find these options helpful, but I felt they just got in the way. 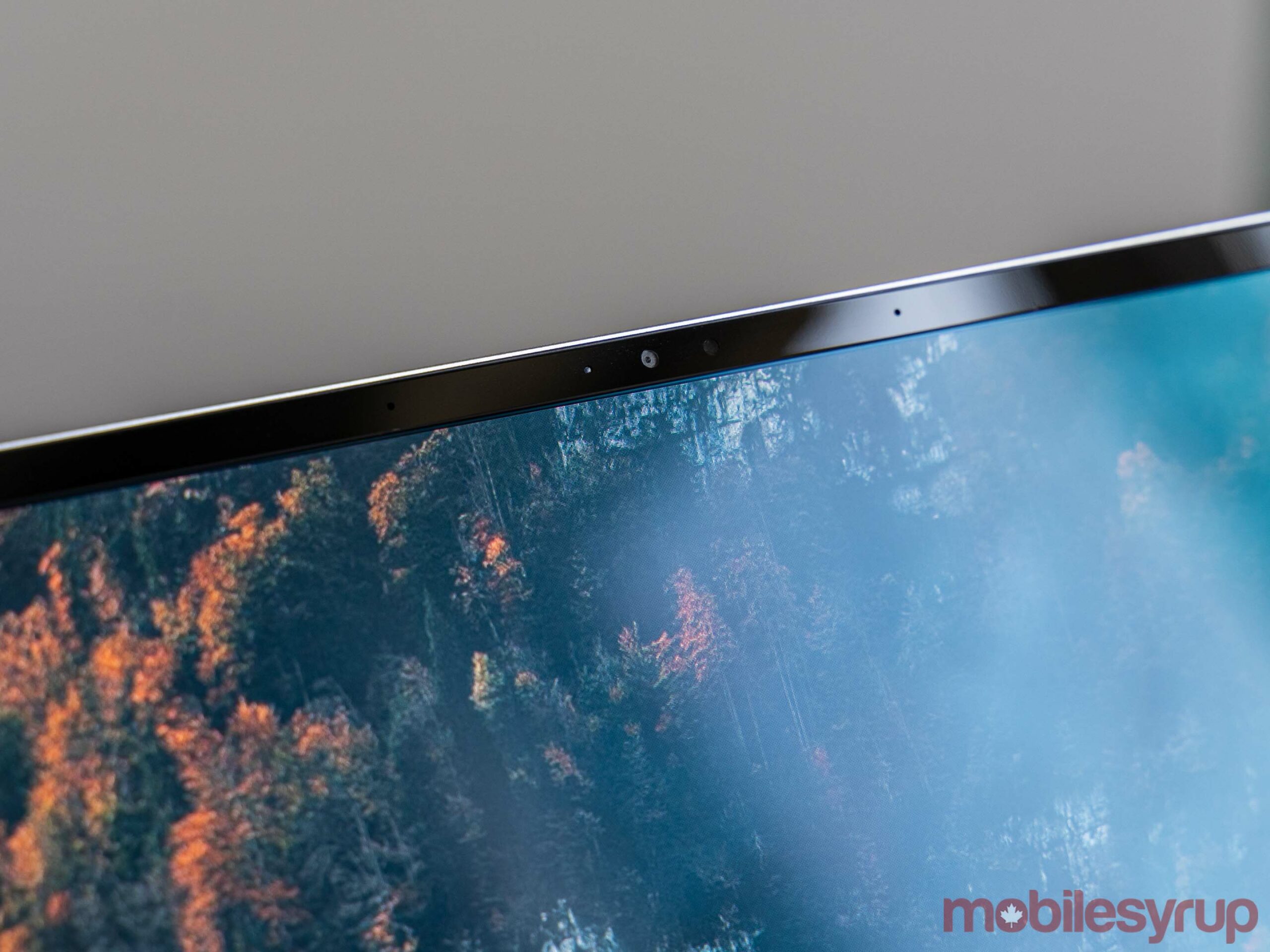 Overall, I thoroughly enjoyed using the Galaxy Book Pro for the few days I had access to it. Aside from some minor issues with hardware not quite working as it should, the Book Pro worked well.

I’ll need more time with a Galaxy Book in the future to properly put it through its paces, but for a start, I’m generally impressed with what Samsung’s done here. Is it the best laptop on the market? No, but it offers a great experience in a thin-and-light package.

Anyone in the market for a thin, portable laptop that still has some solid performance chops should keep an eye on what Samsung’s doing.