Indigenous TikTokers have created a space to share stories and experiences 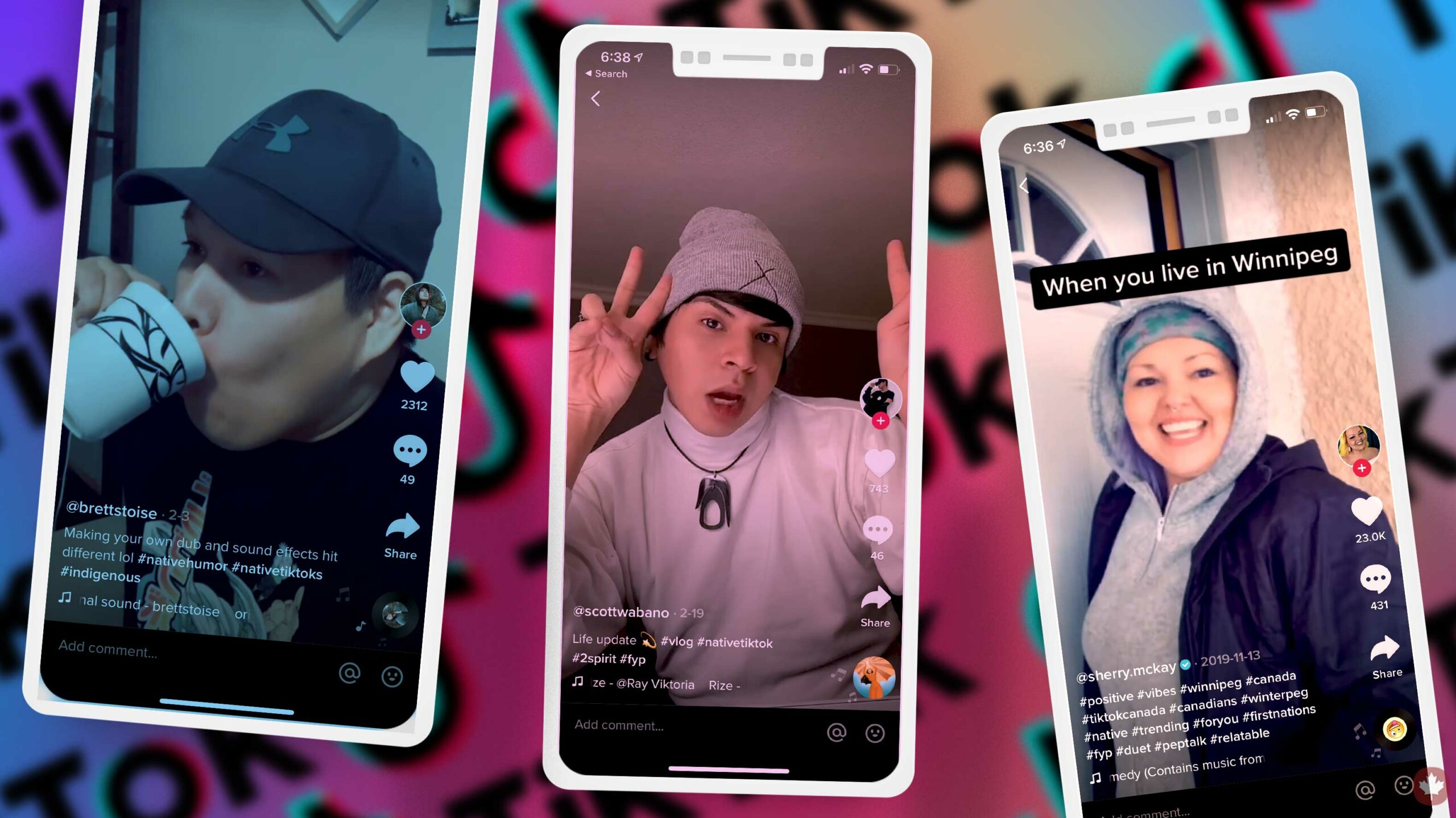 Over the past year, TikTok has gained popularity among all ages for its ability to provide escapism amid the ongoing pandemic. For Indigenous creators on the app, it’s become a way to spread laughter and connect with others in their communities.

Whether it’s making videos about relatable experiences, raising awareness about ongoing issues or simply spreading humour, Indigenous creators have built a space to share their stories.

Here’s how three Indigenous creators are using TikTok to connect with others. 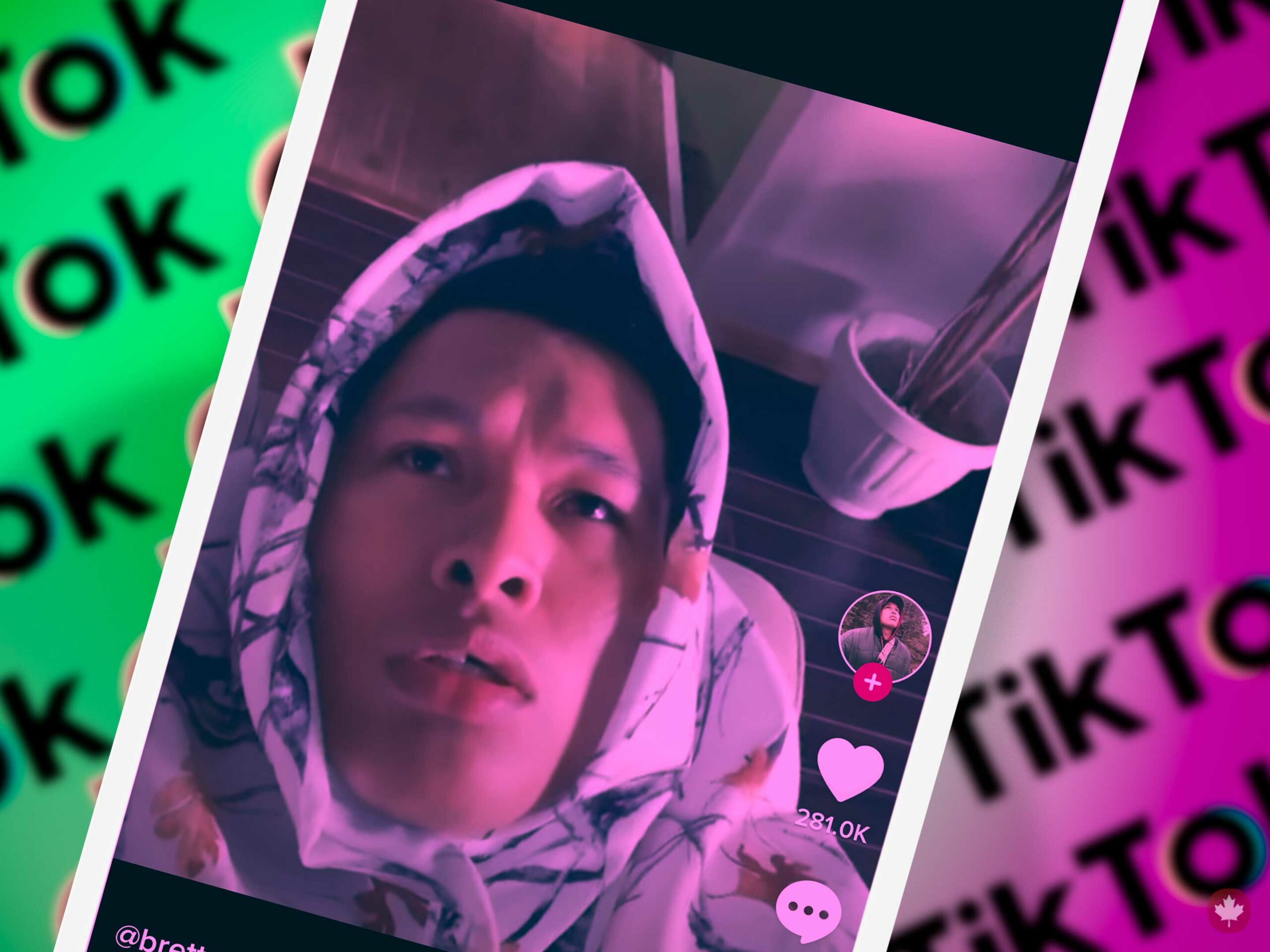 Brett Mooswa, a Nehiyawewin (Plains Cree) from Makwa Sahgaiehcan First Nation in northern Saskatchewan, posted his first video on TikTok in February 2020. Since then, he has reached over 366,400 followers and 5.6 million likes in the app.

Mooswa says his first video garnered some traction in the Indigenous community, which then encouraged him to create more videos. His goal with his videos on TikTok is to share love and laughter.

Mooswa notes that Indigenous creators are breaking boundaries on the app, especially since Indigenous voices aren’t prominent on social media.

“I draw a lot of inspiration from actual events and exaggerate it to a degree.”

“The videos I make vary from humour to recognition of who you are and where you come from. Through TikTok and other platforms, I want to see my people rise up from where they are or see themselves,” he told MobileSyrup in a recent interview.

Mooswa says he believes that laughter transcends language barriers and that it’s a great way of connecting with others.

“When I say laughter brings healing some people tend to think figuratively. But in actuality it boosts the immune system, relieves stress, increases immune cells and infection-fighting antibodies,” said Mooswa.

Mooswa outlined that when people are hurting, they don’t heal with more pain, they heal with love. He touched on his own personal experience and explained that in situations where he was hurting, someone showed him love and made him laugh to remind him it’s not the end of the world.

He notes that he gets inspiration from everything around him and that he has a “go with the flow” approach with his content and rarely writes ideas down.

“I can be sitting down eating a sandwich and an idea would pop in my head so I would make the video right then and there. I draw a lot of inspiration from actual events and exaggerate it to a degree,” Mooswa stated.

“…I take inspiration in knowing how ridiculous the world sees us”

“Like Johnny Depp as Tonto in the Lone Ranger talking stoically, I’ll also do the same. People think an actual Indigenous person should have been cast and I agree. But you have to laugh at those things for what it is.”

Mooswa stated that “getting frustrated and worked up about it won’t get you anywhere. So, I take inspiration in knowing how ridiculous the world sees us. Only we can change the narrative.” 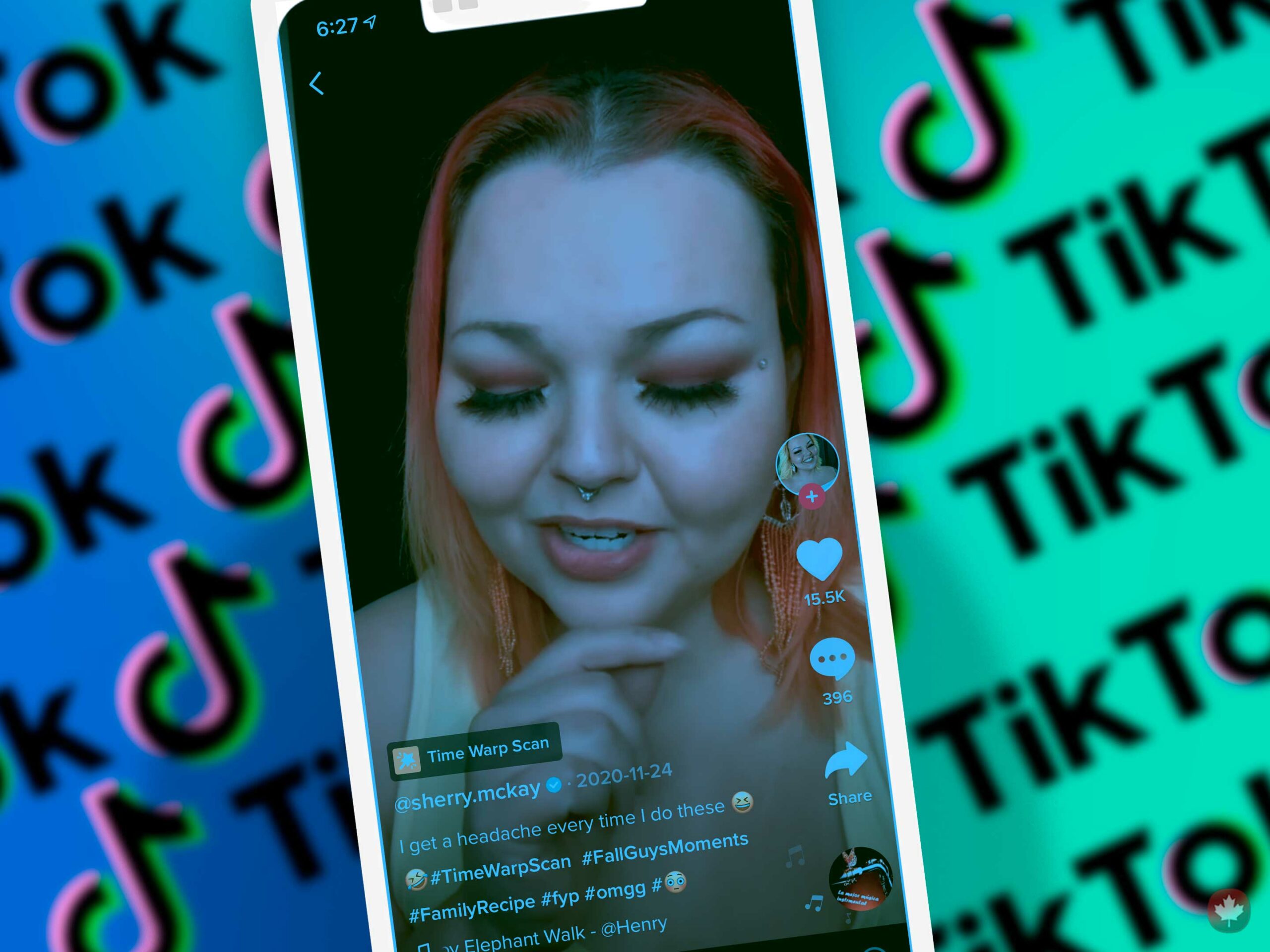 Sherry McKay, an Ojibway Anishinabe woman from Treaty 1 Territory, born and raised in Winnipeg, Manitoba and a band member of Sagkeeng First Nation, uploaded her first video on TikTok in June 2018.

Although McKay grew up wanting to be a police officer and has a diploma in policing, she was drawn towards storytelling in media.

“I uploaded my first TikTok in June 2018 and deleted the app. I went to make another video months later and discovered I had 69 followers, and I realized that there was a small representation of Indigenous content on TikTok,” McKay told MobileSyrup.

She notes that after her first few videos, she received numerous comments that questioned her ethnicity. Since then, she has made it her mission to show people on the app that Indigenous people come in all shades.

“I love making comedy, but I also have an obligation to use my platform for awareness and to uplift Indigenous voices,” McKay stated. “Comedy has a way to help us heal. Us Indigenous people will joke about some of the darkest, most traumatic things and laugh about it. It’s how we move past some of our struggles.” 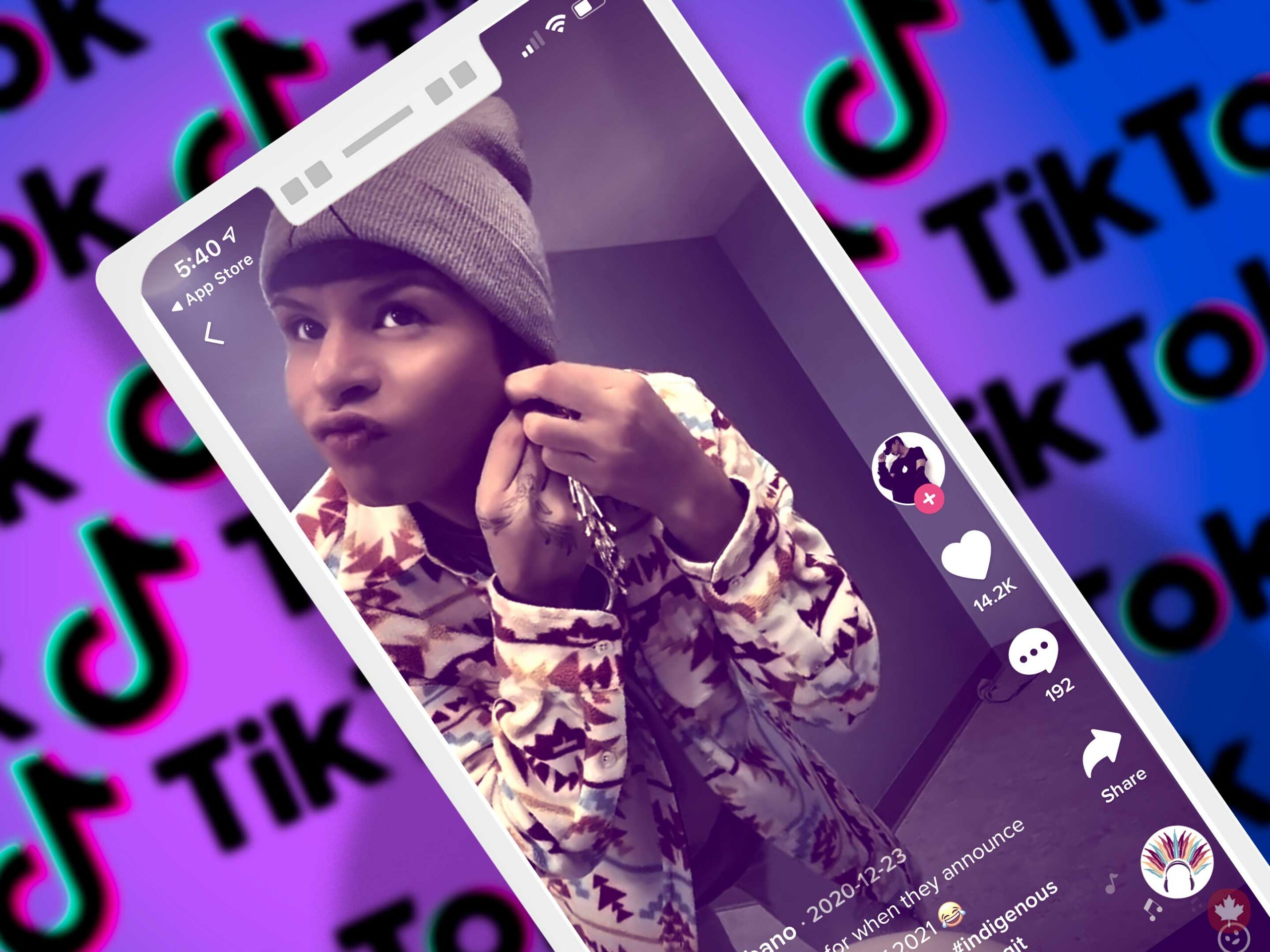 Scott Wabano, a 2Spirit Eeyou’d from the Cree Nation of Waskaganish, located in the Eeyou Istchee territory in Northern Quebec, started making videos on TikTok in March 2020 towards the start of the COVID-19 pandemic.

Since then, Wabano’s account has amassed 30,000 followers and nearly half a million likes. Wabano, who was raised in Treaty 9 Territory on the lands of Moose Cree First Nation, says his goal with his videos is to bring happiness to people amid the pandemic.

“Growing up I’ve always heard that laughter is medicine, and it truly is. Since then, I’ve always been that person to always want to make someone’s day brighter by laughing,” he told MobileSyrup.

Wabano stated that growing up he found escapism in media, such as fashion magazines and TV shows but found that they lacked representation of First Nations, Metis and Inuit peoples. He grew up wanting a future where youth like him were able to see someone that looked like them and had the same experiences as them.

“My goal is to let youth know, that wherever they may be from or whatever experiences that they went through, they are able to overcome anything with their resiliency, they are able to achieve their dreams and to love themselves for who they are.”

Wabano says he loves making TikToks that other Indigenous youth can relate to because it can bring a sense of familiarity to their lives.

“Even the videos that I create on a whim, I am honestly just making myself laugh most of the time…”

“It’s nice to know that other people have shared those same experiences as you as it makes you feel less alone in the world. From someone who grew up in such an isolated community, those feelings of loneliness always came up in my life. If I saw these types of videos growing up, it would’ve created a much more positive impact in my life just knowing that there are other Indigenous youth facing the same situations as I have.”

Wabano says he also enjoys making videos about his journey and progress in life so he can let other Indigenous youth know that they too can rise above difficulties and make a better life for themselves.

“Even the videos that I create on a whim, I am honestly just making myself laugh most of the time and like I mentioned, laughter is medicine,” Wabano stated.