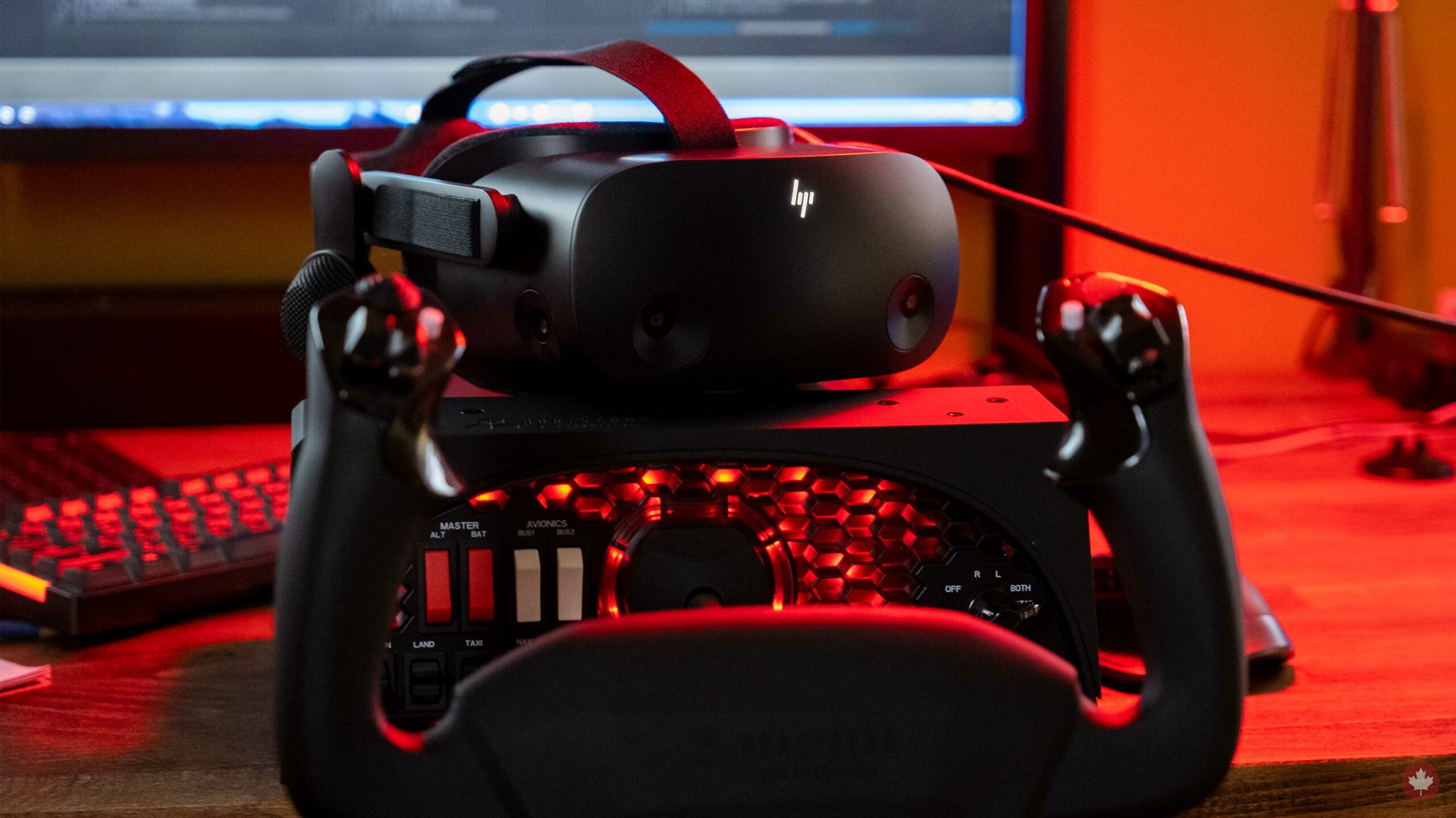 Flight Simulator has been one of my favourite experiences of the last few months due to its exceptional realism level and the simple fact that it’s a fun escape from reality.

While I thought the game was great before, I wasn’t ready for the jaw-dropping experience that is Flight Simulator in virtual reality. This allows you to freely peer around the cockpit, which actually adds much more immersion to the game than I expected.

That’s not to say the experience in VR is perfect. There are still lots of issues with virtual reality, including a significant upfront price and the fact it requires a gaming PC. Coupled with the minutiae of shifting settings around and learning a new PC experience, it’s hard to recommend Microsoft Flight Simulator in VR to anyone who doesn’t enjoy playing with confusing tech. That said, once you get in the sky, all of that fades away to create an experience I’m a lot more confident in calling the future of gaming now than I was before I spent this much time with a VR headset.

What do you need to fly in VR? 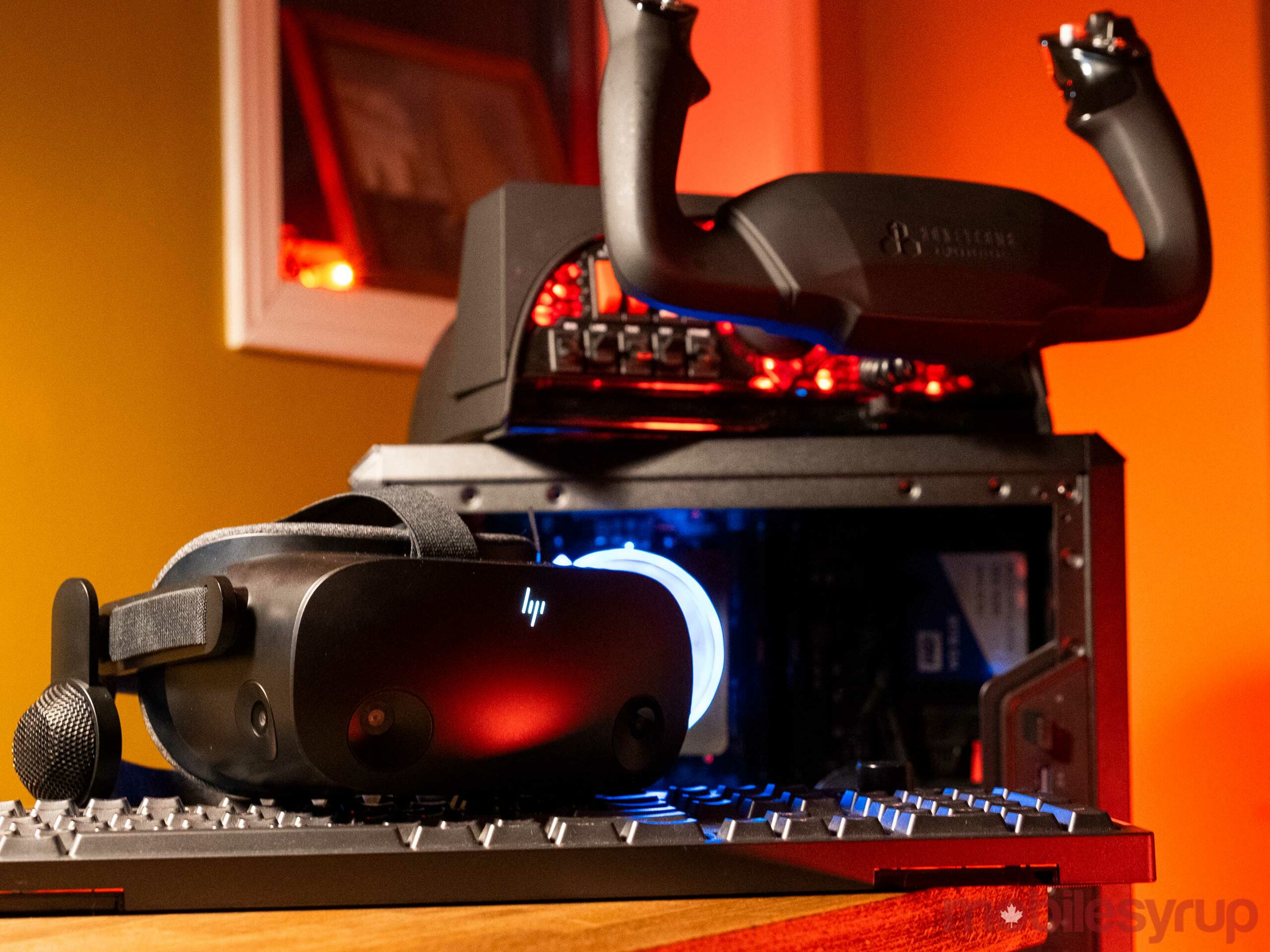 Flight Simulator is already a hefty game for any PC to handle, and, unsurprisingly, adding a VR headset to the mix doesn’t make it run any smoother.

Before I get too far into explaining how my PC handles VR, I’ll outline my gaming rig’s specs:

Overall, it’s not an incredibly impressive setup, but it gets the job done and is made up of mostly modern components.

With the majority of settings set to ‘Medium’ and only a select few cranked to ‘high,’ my PC handled the game reasonably well with the only real component getting 100 percent usage being my GPU. The experience was nothing to scoff at, either, with the added immersion overshadowing any foggy details once you’re actually flying.

Microsoft says you can get away with either an Intel i5-8400 or Ryzen 5 1500X CPU and an Nvidia GTX 1080 or equivalent graphics card. The devs also specify that your graphics card should have 8GB of video RAM and that you need at least 16GB of regular RAM.

All of that said, the game was very playable on the HP Reverb G2 headset I used, but I had to turn the resolution down to a little above 1440p. When I tried to play the game in the full dual 4K resolution, it was incredibly sharp but way too laggy. I also noticed that pushing the resolution slider to anything above basic 4K almost looked the same, so while it’s nice that the Reverb G2 is future-proofed with its high-res displays, it doesn’t seem like a pivotal purchase for Flight Simulator 2020. 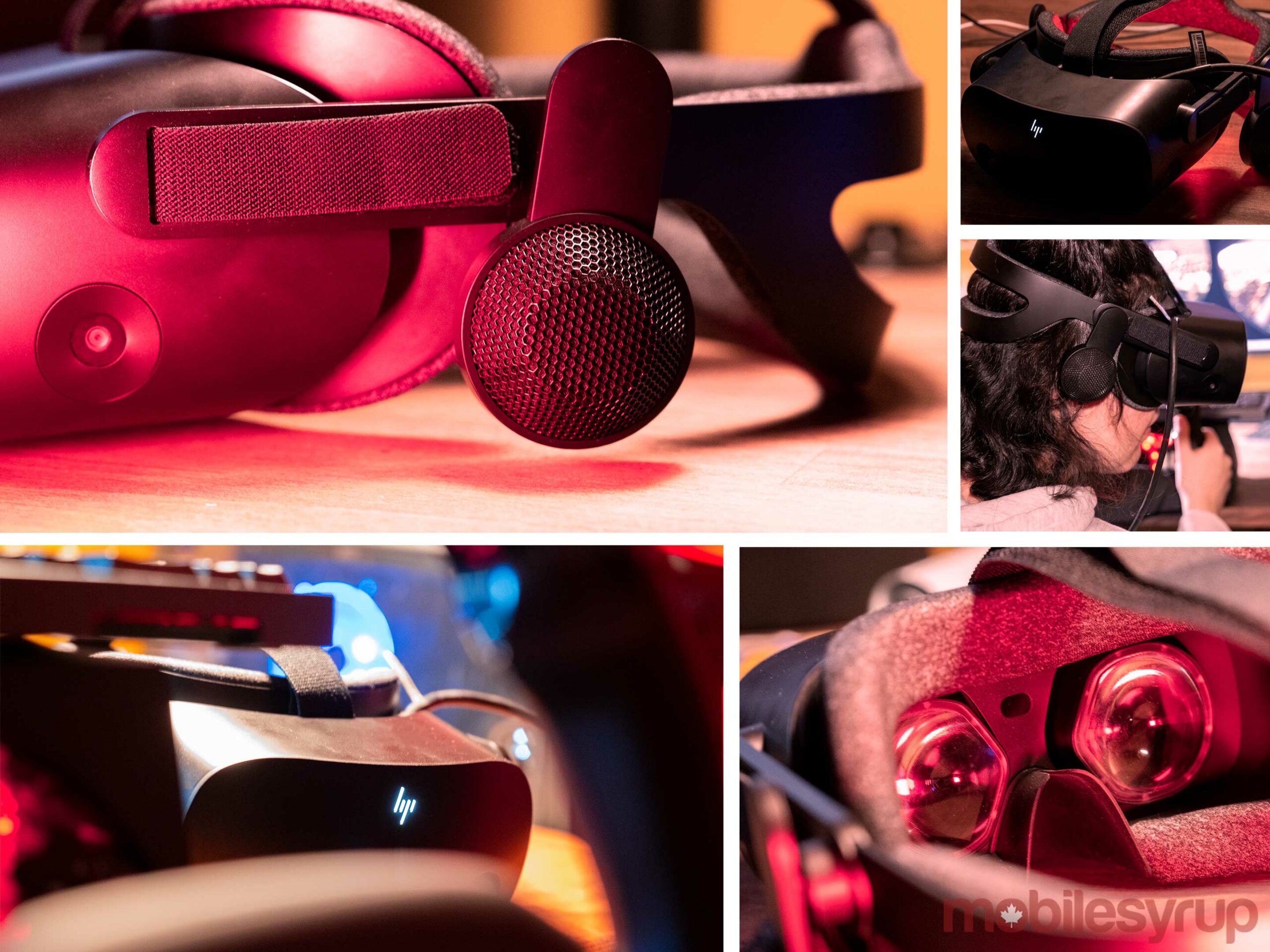 That’s fine because the game works with all SteamVR and Windows Virtual Reality headsets. This means that a vast majority of units on the market now, including the sought-after Oculus Quest 2 (with link cable), will work with the title.

Flight Simulator 2020 can play really well at low settings when it comes down to it, but you miss out on some of the really awesome visual effects that developer Asobo added to the game.

For instance, with reflections, shadows and lighting cranked, the light from the sun casts shadows behind you and reflects off of all the dials on the dashboard in an incredibly realistic way. These moments add a lot to the game not only because they look great, but also because the realness of the effects adds much more immersion.

Describing VR to people is almost impossible. For some reason, a lot of people, myself included, just don’t take the platform seriously. Maybe it’s because of how janky watching VR footage looks on YouTube or the fact that wearing a videogame headset and waving your arms around looks ridiculous. Seriously, once you actually play a game like this in virtual reality, your whole concept of the technology changes and the possibilities start to seem endless regarding what it can do.

I’m a little annoyed by the camera’s default position in Flight Simulator 2020 when playing on a screen. Raising my physical desk chair to get a better vantage point in VR, was the first big game-changer for me.

Asobo added a new 3D form of mouse controls in the VR update that allows users to interact with the buttons and dials on the plane’s dashboard in a slightly more natural way when in VR. I know it sounds weird, but once you start using it, the feature becomes surprisingly intuitive.

This also helps now that you can dock in-game nav, weather control and autopilot windows in the virtual game space to make it easier to merge the game elements with the real-life space inside the plane’s cockpit. 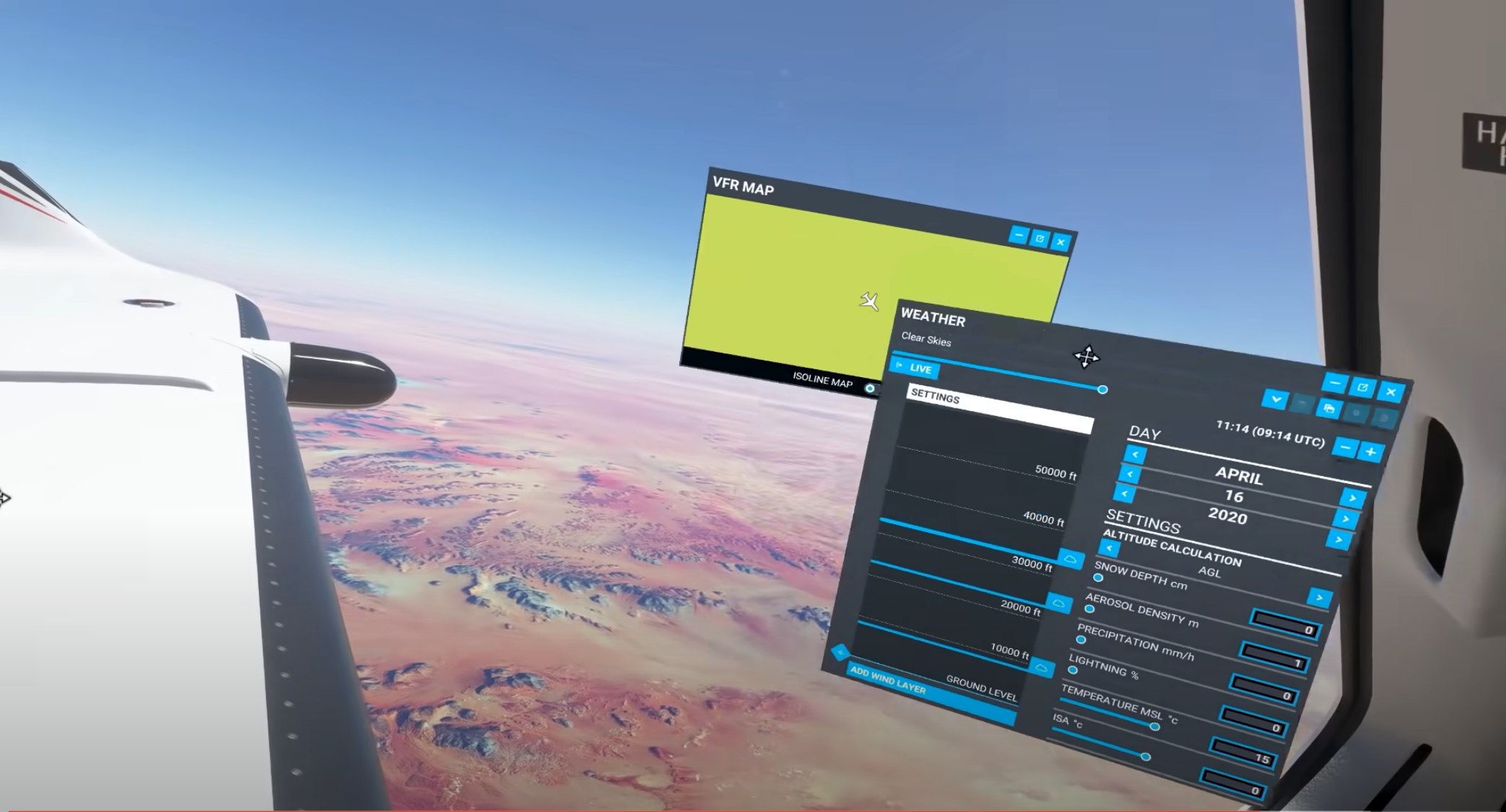 Of course, things I thought would be fun in VR, like performing barrel rolls and loops, turned out to be too much since they made my stomach feel queasy as my brain and body got confused about the world’s orientation.

That’s not to say you can’t do fancier flying with VR enabled, though. Flying with a static screen always seemed a bit clunky and less natural. In VR, it feels a lot easier to do crazy flight maneuvers, and I was even able to zip around the Toronto skyline much closer to the buildings and the ground than before.

It’s not just the position I can now sit in when playing, either. Being able to freely move your head to read the dials on the dashboard and look out the window are small touches that add a lot to how real it feels to fly a virtual plane. It’s how immersive the game gets in the headset that really makes it worth it. It’s difficult to describe the feeling of flying away from the sun and watching the sunlight creep across your dashboard. The first time this happened, I even felt the back of my neck heating up like the sun was shining on it, even though it obviously wasn’t actually happening.

It’s hard to explain how freaky and exhilarating things like this feel in virtual reality, but once you try it out and encounter an experience that tricks your brain into feeling something that’s not there, it really sells you on how game-changing it can be.

Comparing Flight Simulator to other flying-based VR games like Star Wars Squadrons is fun, but it’s a bit of an apples to oranges scenario. Personally, I think it’s easier to jump into and play a game like Squadrons, but the VR experience of Flight Simulator is unbeatable and is something that really needs to be seen to be believed, preferably on medium or higher specs.

This sounds amazing, but are there any downsides? 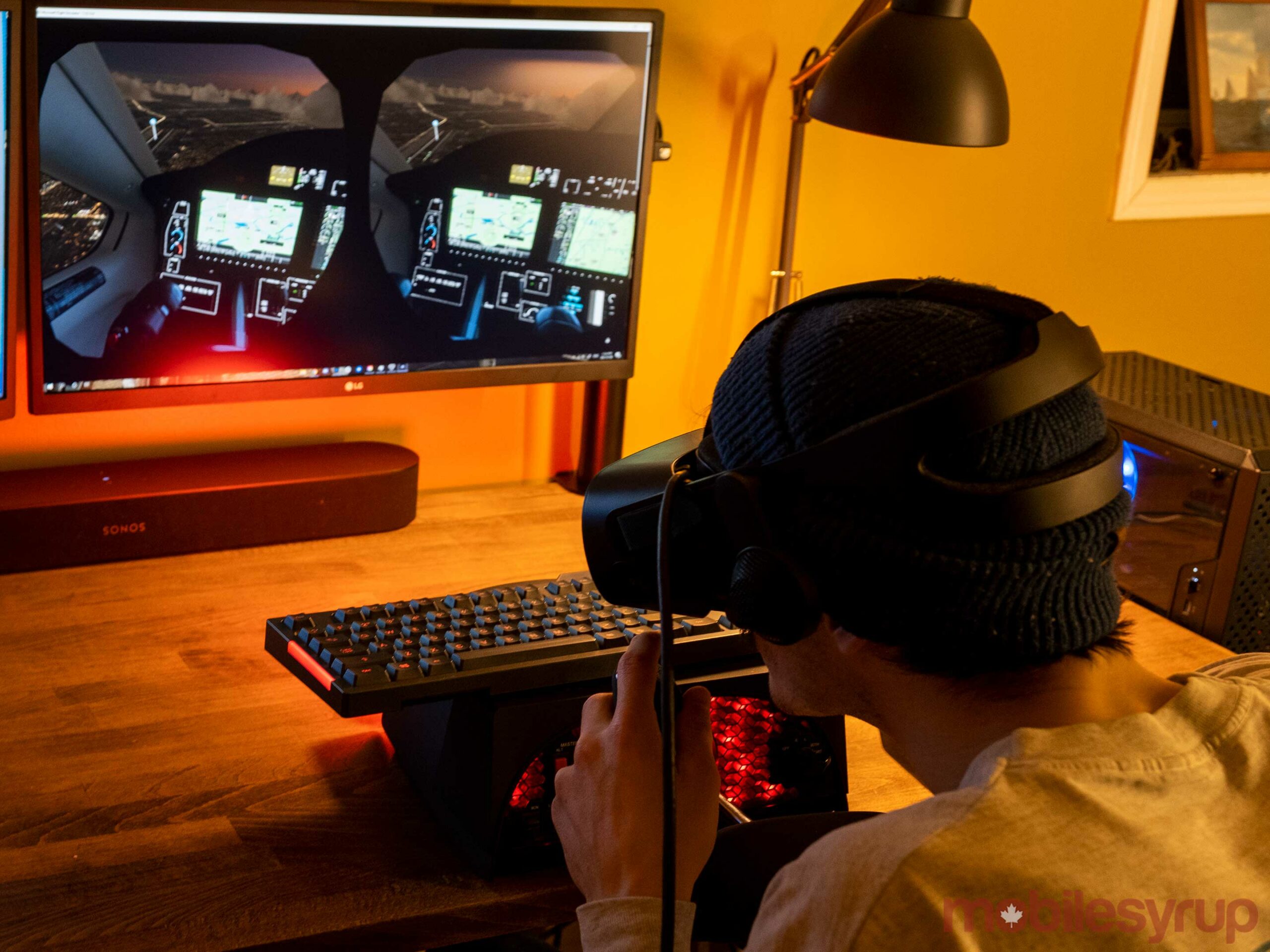 When you get VR working in Flight Simulator it’s a dream, but getting it up and running takes a little more than a beefy PC and a decent headset.

For instance, if you’re not using a Microsoft Mixed Reality headset like the Reverb 2, you need to download ‘OpenXR’ to make the game compatible with your headset. Luckily this isn’t something I had to do, but it’s another hurdle to playing in VR.

Then, once you go into the game for the first time, you need to map all of your controls for virtual reality, including a point of view reset option and a VR toggle key. Both of these are crucial to playing in VR, yet for some reason, the game doesn’t make you set them up before you play, allowing you to get stuck in VR pretty easily.

…If you have a decent PC and a VR headset and you have yet to take a spin with Flight Simulator, you should definitely check it out.

Another issue that modern VR tech can’t really solve is that it’s tough to see the buttons on your yoke or whatever controller you’re using in VR. This means if you use a half yoke/half keyboard setup like me, you constantly have to peek under the headset to see where buttons are for things like throttle, landing gear and more. I’ve partly worked around this by remapping important keys to buttons I can feel out more easily, but this is still a bit of an imperfect workaround.

These problems don’t really detract from the game, but it’s useful to know about them before you start, and it leads into my bigger problem with Flight Simulator 2020 — the game is too hard to pick up and play.

Sure, it’s fun to spend hour mapping controls, planning a journey and tailoring your cockpit setup for realistic flights and landing challenges, but now that I have this beautiful game that’s super fun to just fly around in, it would be nice if there was a simple mode that made it easier to boot up.

When it comes down to it, I’ll always take the VR version of Microsoft’s Flight Simulator over the standard version. The simple accomplishment that is Flight Simulator 2020 is impressive enough, and the fact that it keeps getting more impressive with each new update makes it one of the most appealing games coming into 2021.

Watching the sunset behind me or looking out the window at the coastline below in VR is a compelling experience that most people should try if they ever get the chance. It feels more real than any other game I’ve played, which is an amazing accomplishment — I just wish it was easier for other people to experience.

With all that said, if you have a decent PC and a VR headset and you have yet to take a spin with Flight Simulator, you should definitely check it out.