Canada also placed 26th for ‘excellent consistent quality’ with a score of 79.1 percent

The report reveals that Canada’s performance makes it the leader in North America. It also notes that Canada placed 26th overall for ‘excellent consistent quality’ with a result of 79.1 percent.

This means that 79.1 percent of mobile connections were good enough for high-intensity use cases like 1080p video streaming, group HD video calls or real-time mobile gaming on the go.

In comparison, the United States was six places behind ranking 32nd, with a result of 75.4 percent. Norway ranked first with a score of 89.6 percent.

“Individual countries that excelled in their region were Singapore and South Korea in Asia, Australia and New Zealand in Oceania, Canada in North America and Uruguay in South America,” the report outlines.

In terms of ‘core consistent quality,’ Canada ranked 23rd overall, but topped the ranks for North American countries with a score of 94.1 percent. The core consistent quality category examines the percentage of connections suitable for many day-to-day activities, such as SD video streaming, social media sharing, and web browsing. 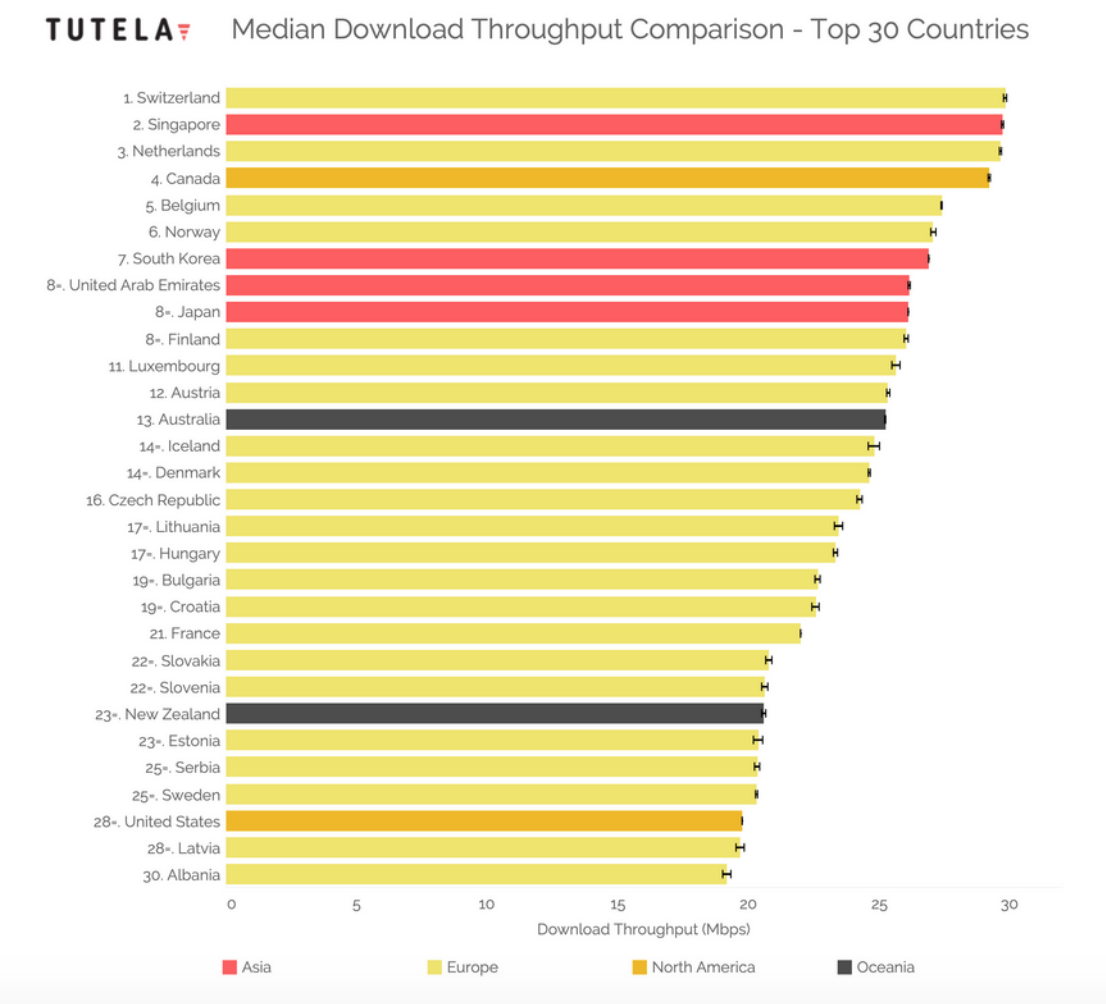 The United States ranked 30th overall at 92.8 percent in the core consistent quality category. Denmark ranked first globally with a score of 97.5 percent.

It’s worth noting that Nordic countries frequently outperformed any other region, and led the way for mobile experience in both Europe and the rest of the world.

Interestingly, the report outlines that a focus on speeds, after a point, doesn’t always measurably improve things for consumers.

“As we head into the 5G era the results highlight a critical message – that faster download speeds don’t always equal a better mobile experience,” said Tom Luke, the vice-president of Tutela, in the report.

Further, the report outlines that despite the marketing hype around faster speeds, above a point faster speeds deliver little in terms of network experience improvement.

“Switzerland, who had the fastest median download speeds, was ninth when it came to excellent consistent quality — beaten by countries with download speeds that were up to 19 percent slower,” the report states.

The results from this report were compiled from over 1.4 billion mobile download and latency tests collected worldwide between August 2019 and August 2020.