Lenovo Duet Review: Great Chromebook, but not the perfect computer

There is so much to love here, but it’s going to depend on your use case 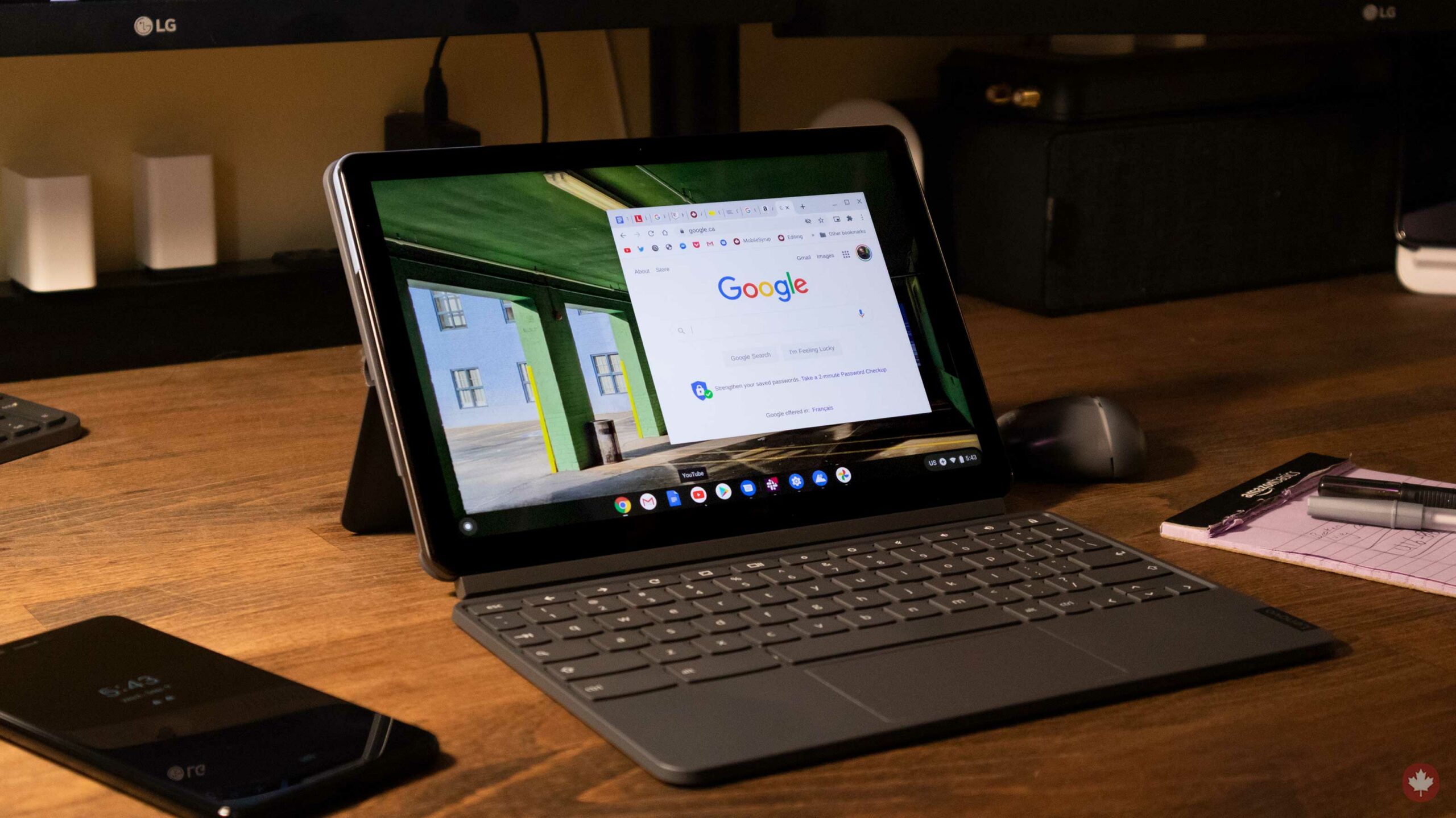 Lenovo has come close to building the perfect Chromebook with the Duet, but it’s still not the best device for everyone.

The company made an excellent tablet/PC that screams modern design and value at the same time, which puts it neck and neck with Apple’s entry-level $429 iPad. That said, for a lot of people, the included keyboard and a familiarity with Chrome OS might make the Duet a better buy.

The Duet is a $349 tablet with a kickstand attachment and keyboard that turns it into a laptop-like device. Since it runs Chrome OS, its software is pretty good at swapping between these form factors, which might be its biggest strength.

All that aside, its small form factor leans more towards kids or people who want maximum portability in a computer. Meaning, that no matter how cool this computer looks, it’s sadly not for everyone. Read on to find out if the Duet fits into your life. 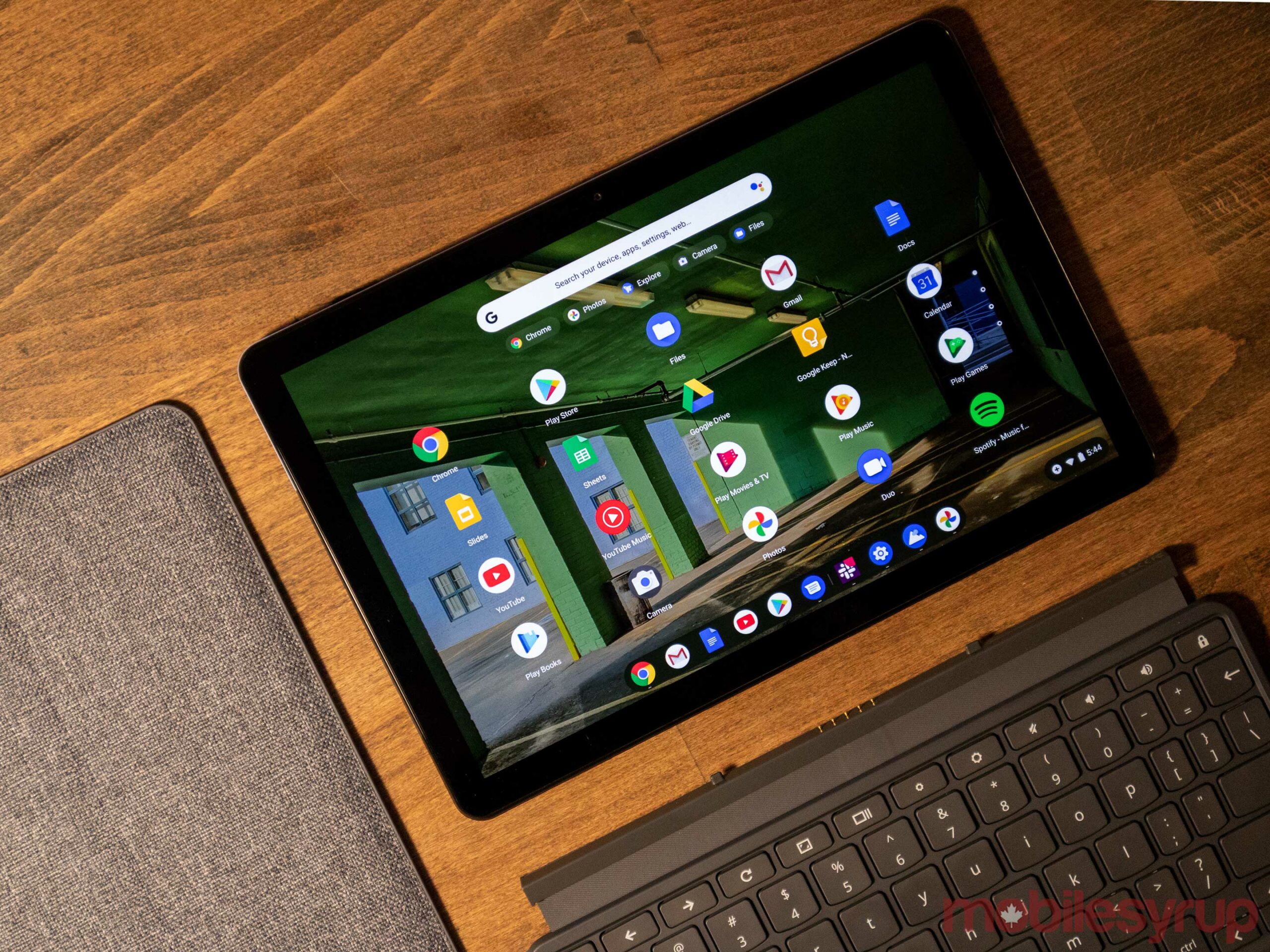 While the tablet might be on the lower-end of Chromebook specs, it’s near the high-end in terms of hardware build quality.

Without the keyboard and kickstand installed, the device is a small tablet with an iconic-looking design. For the most part, the shell that wraps around the screen is dark grey metal except for a teal strip at the top.

I’m a big fan of the look, and I think its stylish teal strip fits in with Google’s modern hardware quite well. The actual feel of the tablet in your hands is substantial and comfortable, which makes it easy to use for long periods. 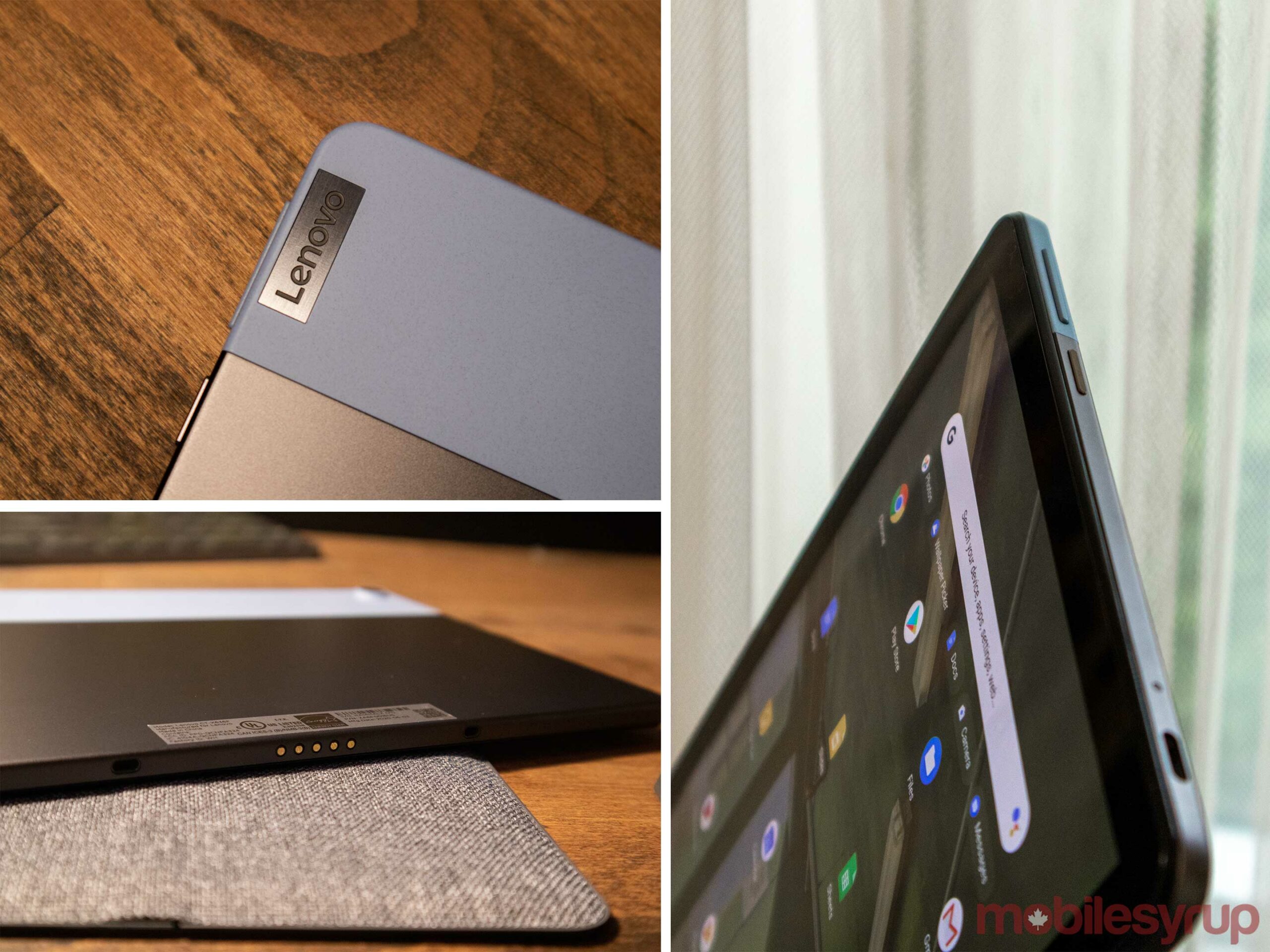 The small bezels around the 10.1-inch display are relatively modern and even small compared to the base level iPad. The screen has a decent 1920 x 1200 resolution with 224 pixels per inch, which is crisp to look at.

Inside all of this beautiful hardware is the Mediatek Helio P60T, which is an ARM-based chipset that’s typically meant for smartphones. It performs admirably here, but it’s not the fastest.

The experience of using it isn’t bad, and it more or less keeps up with my basic workload of having a few tabs and apps open at all times. It does lag a bit occasionally, which worries me. If it’s already lagging when it’s brand new, how well will the device work in a few years?

Since Chrome OS is fairly lightweight, the Duet should be able to last a couple of years, but it’s still worth pointing out that it’s not going to be blazing fast like a Pixelbook with an i5.

For the most part, all of the hardware is solid. Even the speakers are decently loud, and the webcam works as expected. The rear camera isn’t going to blow anyone away, but it might be handy to have in a pinch or to scan a physical document. 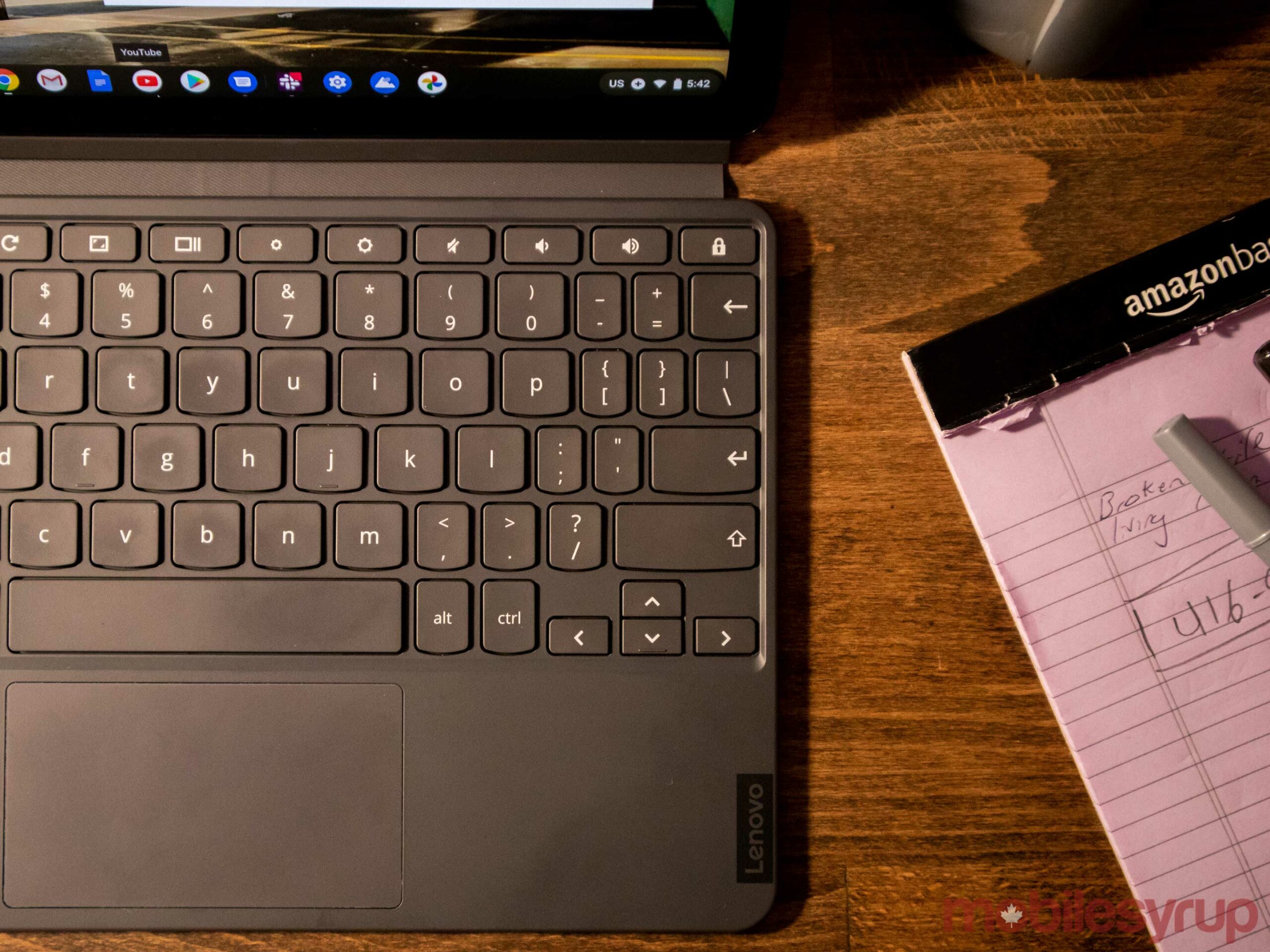 Where things fall off the rails is with the included keyboard cover. It’s not bad and gets the job done, but it’s a bit cramped, and I struggled to use it on my lap. Depending on how you’re sitting, there are good and bad ways of using a two-in-one. With the relatively weak magnetic connector holding the keyboard to the tablet, there are few good ways to hold this on your lap.

For instance, if your hands are resting too heavily on the keyboard and it’s flexing a bit, there’s a good chance that the trackpad is going to think you’re right-clicking for some reason. This issue is eliminated when you use the device on a table, but it’s worth pointing out. The keyboard is also a little small, so if you work from home, it might make more sense to get a larger Bluetooth keyboard since most of the buttons on the right side of it are squished.

Overall the device’s small footprint is likely to appeal to many, and the fact that you can get real work done on it efficiently makes it an excellent computer for young students or people who mainly browse the web. Even compared to the $1,400 Samsung Galaxy Tab S7+, the Duet is cheaper and underpowered. However, it’s still a better buy since it does enough, and Chrome OS is perfect for two-in-one devices since both its tablet mode and desktop modes work well. 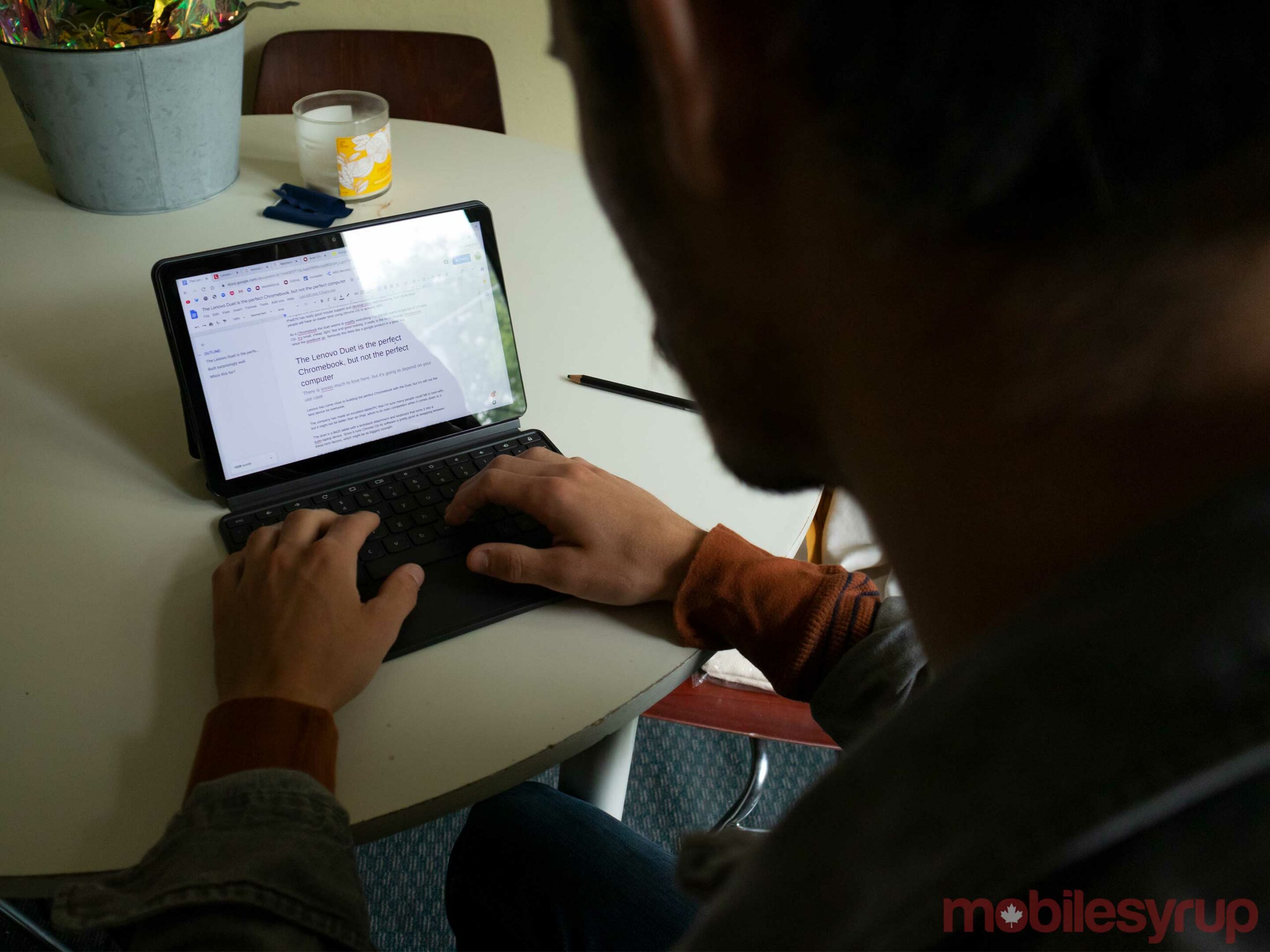 When it boils down to the basics, the Lenovo Duet is an impressive machine. Generally, when computers get down to this price, there are some major trade-offs, but for the most part, Lenovo has been able to make the right calls when constructing the Duet.

I think this computer is good for kids in elementary and high school more than post-secondary. Its size might just be a tiny bit too small for me, but it’s probably perfect for a child with small hands and a tiny backpack. And its ARM chipset also works great for word processing, web browsing and light Android gaming. Plus it has a great battery, which is helpful for a long day at school.

That’s not to say that adults can’t use this machine -- it’s not Trix cereal -- but its small size might make it a bit more annoying to use every day. This is a lot for me to say since I generally love small computers, including Apple’s now-dead 12-inch MacBook and the Acer Spin 311.

Therefore if you do want to buy the $349 Lenovo Chromebook Duet in Canadayou need to take stock of who it’s for and how much work are they going to use it for? It might not be the most durable or fastest machine, but it’s well designed, ultra-portable and works well for just under $400. And in Canada, it’s almost impossible to beat this killer combo of price, design and performance.

"Generally, when computers get down to this price there are some major trade-offs, but for the most part, Lenovo has been able to make the right calls when constructing the Duet"