Beautiful, slim and powerful but it sports a $2,499 price tag 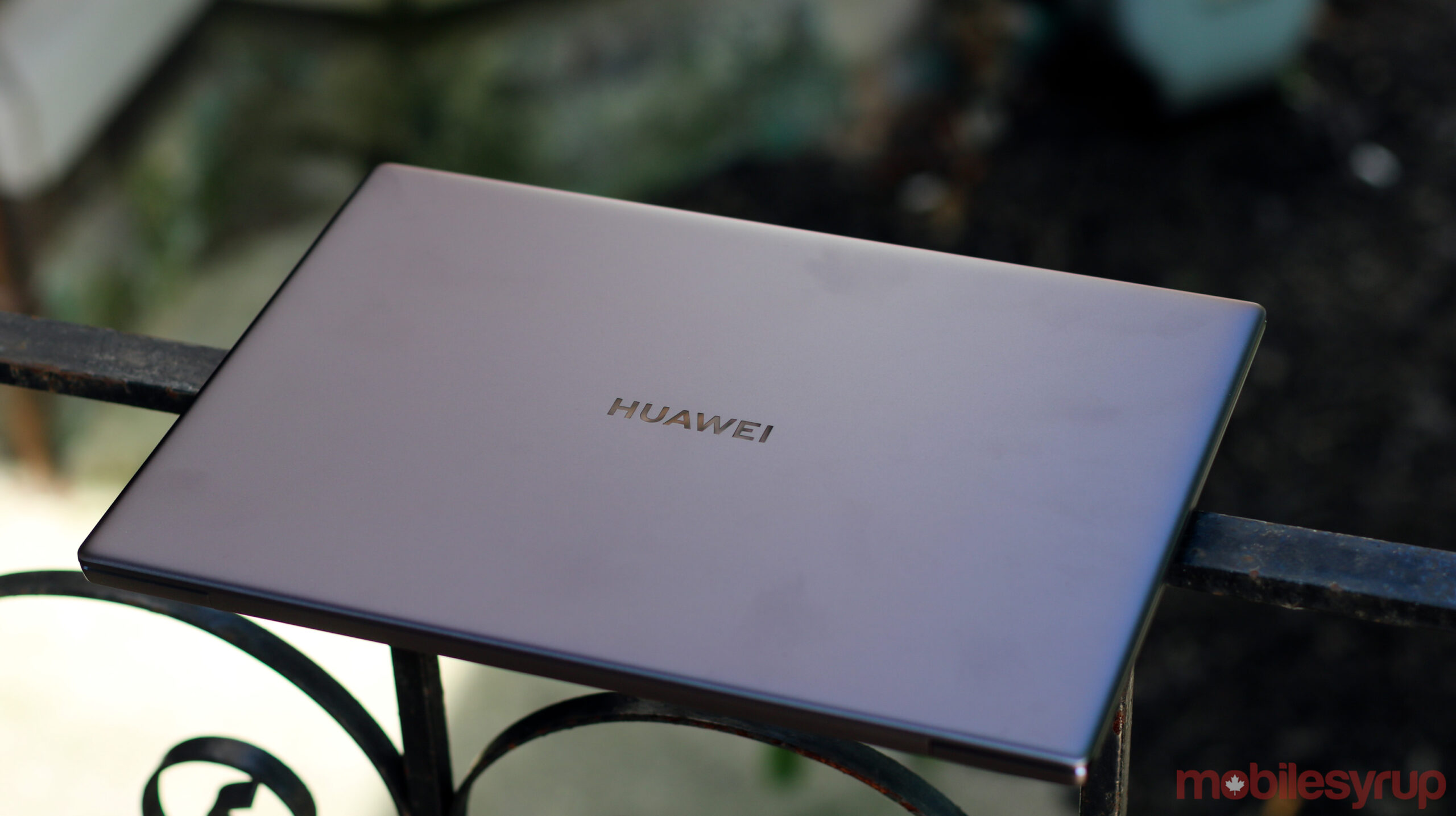 In Canada, Huawei is mostly known for its smartphones, but the China-based company has more to offer. The tech giant also sells smartwatches, wireless earbuds, and laptops like the MateBook X Pro.

The MateBook X Pro sports the best laptop specifications that Huawei offers in any of its notebooks. The device features a slim design as well as a beautiful display. There are some missteps that I noticed, but for the most part, this beast of a laptop is quick, speedy and pleasant to use. 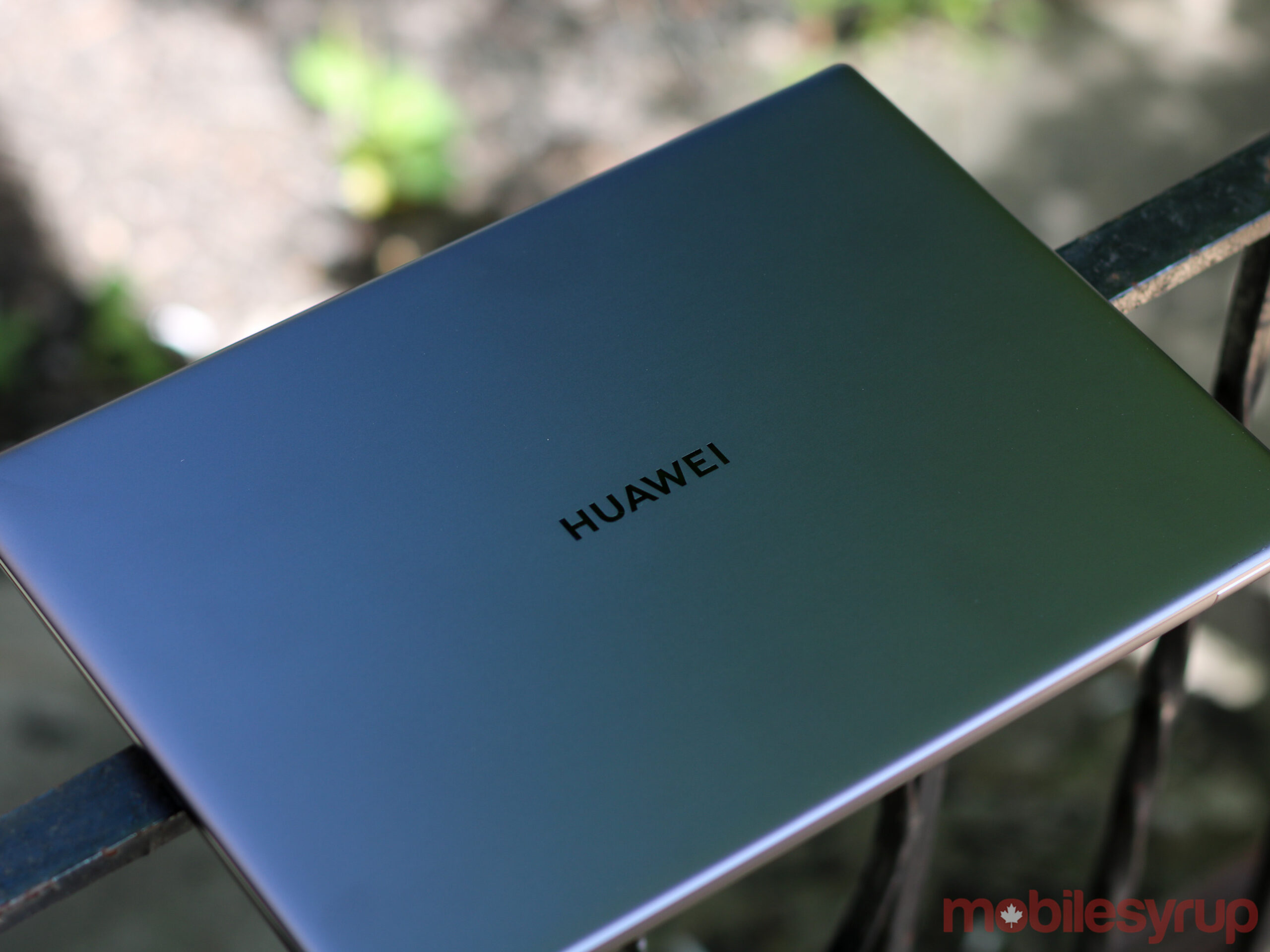 The MateBook X Pro ports a design that doesn’t stand out at first glance and sort of looks like a MacBook, but there are still some interesting design elements.

First, the MateBook X Pro sports a 91 percent screen-to-body ratio. The laptop does this by moving the webcam to the keyboard, allowing for incredibly tiny bezels surrounding the 13.9-inch screen.

Below this is the keyboard flanked by two grills for quad speakers. Tucked under the keyboard is a rectangular trackpad as well as a power button that also doubles as a fingerprint scanner to unlock the laptop. 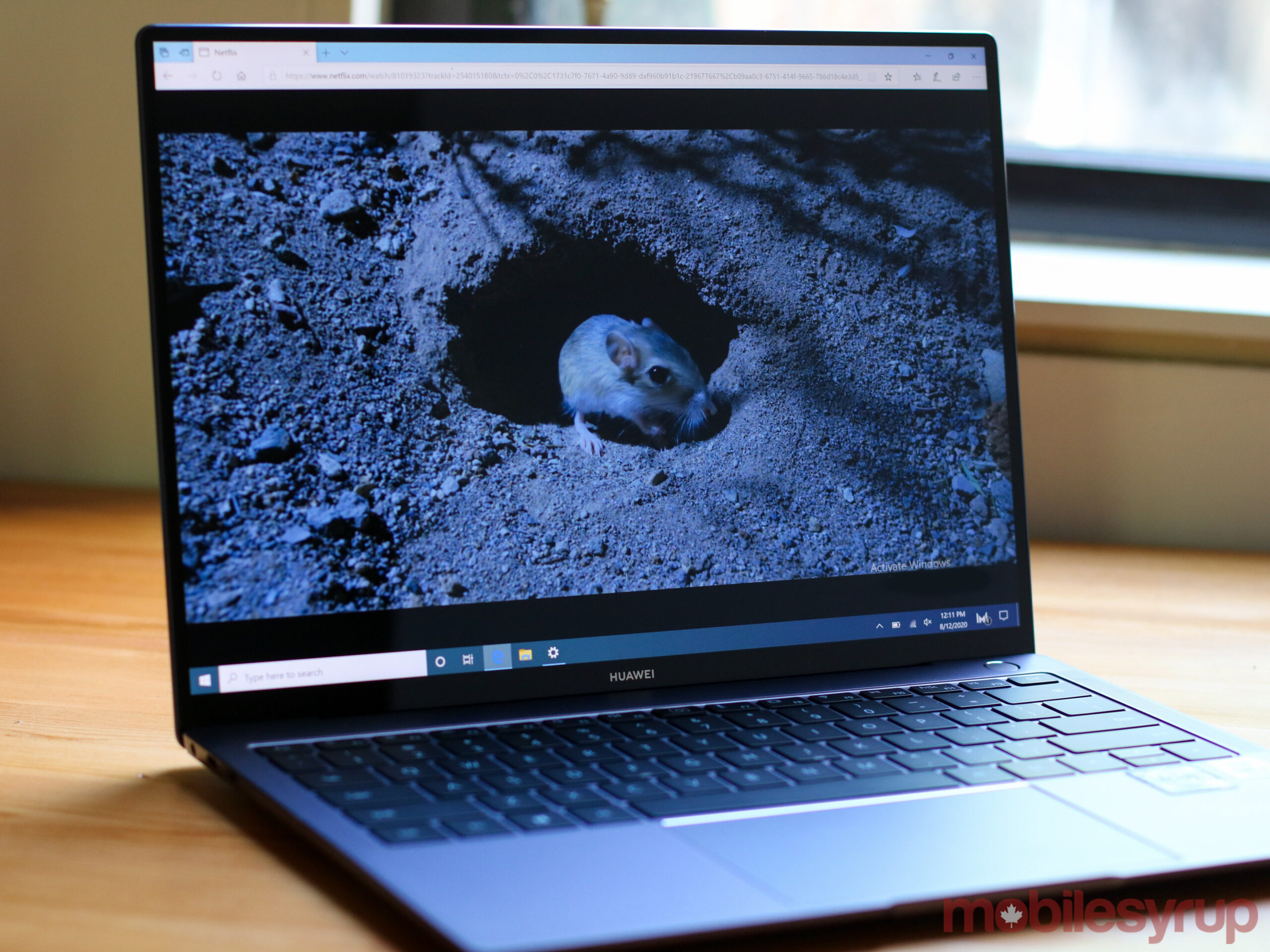 MateBook X Pro’s keyboard features plenty of key travel, offering a desirable experience and speedy touch-typing. I write for about eight hours a day for work and I never experienced any concerns with the device since it’s quite comfortable to use.

Additionally, the left side of the notebook sports two USB-C ports — only one can be used to charge the device — and a 3.5mm headphone jack. The right side of the laptop features a USB-A port. It would have been nice if there was a micro SD card slot, but it’s understandable it’s not there given it helps to keep the laptop’s profile slim. Speaking of being slim, the notebook is 14.6mm thin and weighs 1.33kg (2.93lbs), making it lighter than the 13-inch MacBook Pro but heavier than the MacBook Air.

The MateBook X Pro’s design is elegant and is reminiscent of the MacBook, especially considering it’s available in a ‘Space Grey’ colour variant. 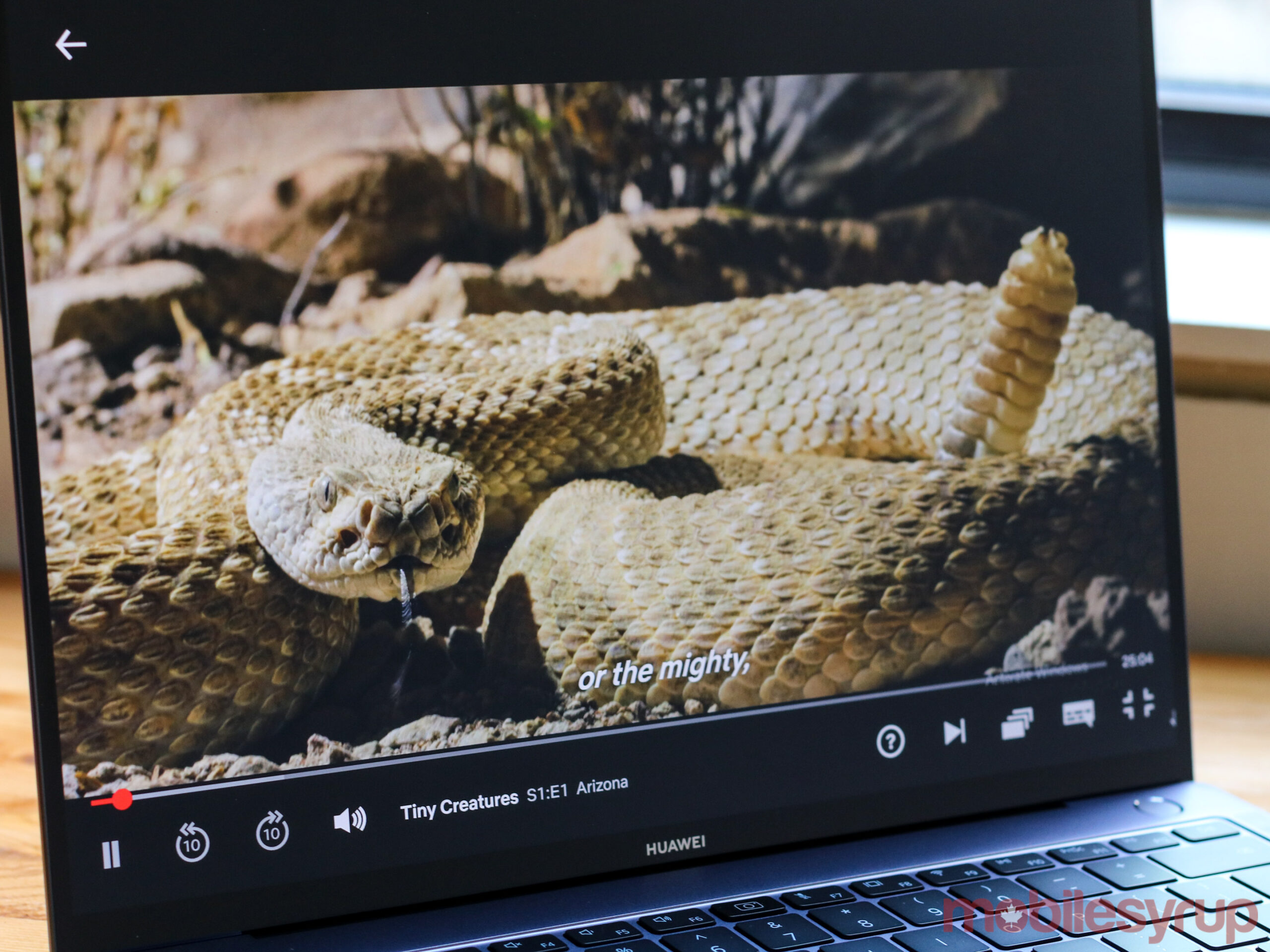 Huawei’s Matebook X Pro’s display is probably my favourite part of the laptop. The notebook has a 13.9-inch LTPS LED screen with a 3000 x 2000 pixel resolution with 100 percent sRGB colour gamut coverage. It also features 450 nits of max brightness.

I like the Matebook X Pro’s slim bezels because it optimizes the space used by the screen offering a large screen experience in a smaller body. 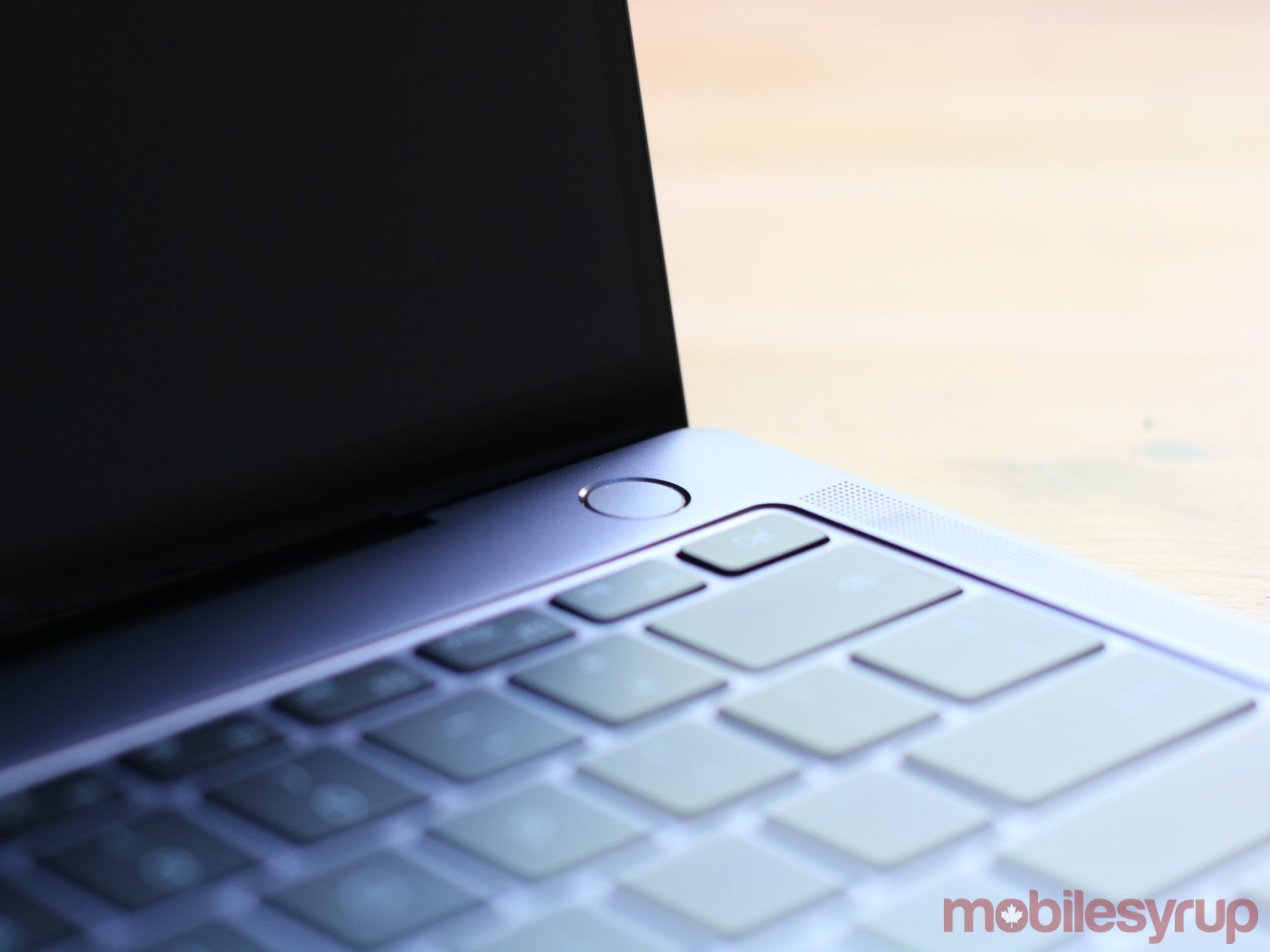 Huawei’s Matebook X Pro, for the most part, offered quick and smooth performance from the moment I unlocked and turned on the laptop.

I mostly used the Matebook X Pro for my work at MobileSyrup, which involved typing, reading and editing articles. Additionally, I edit photos, take part in video meetings, watch videos, listen to music and more.

While doing all of this, I rarely ever experienced issues, though I did experience a few problems when running more resource-intensive apps.

I encountered problems after uploading pictures to Lightroom and using the app alongside Photoshop to edit the photos while Slack and Chrome were running. If I have only one of the above-mentioned Adobe apps running, the laptop chugs away with no problems, but using the two side-by-side alongside my other work results in the laptop running slower. I’ve even experienced it completely freezing on me as well. That said, as soon as I turn off both Adobe apps or restart the laptop, it’s back to normal.

This typically happens due to the lack of RAM, but MateBook X Pro sports 16GB of LPDDR3 2133 MHz RAM alongside a 10th Gen Intel Core i7-10510U processor and an Nvidia GeForce MX250 graphics card. This isn’t the kind of issue you’d expect to occur with a laptop this high-end. But, it’s worth noting that the lag doesn’t happen every time I have both apps open, just when I’m loading many pictures into Lightroom and using these other apps as well.

Battery life is also quite solid. On days when I’m not editing several pictures, it has no issue surviving a full eight-hour shift and more. And even when I spend a lot of my day editing photos, I find it can nearly make it through the full workday. 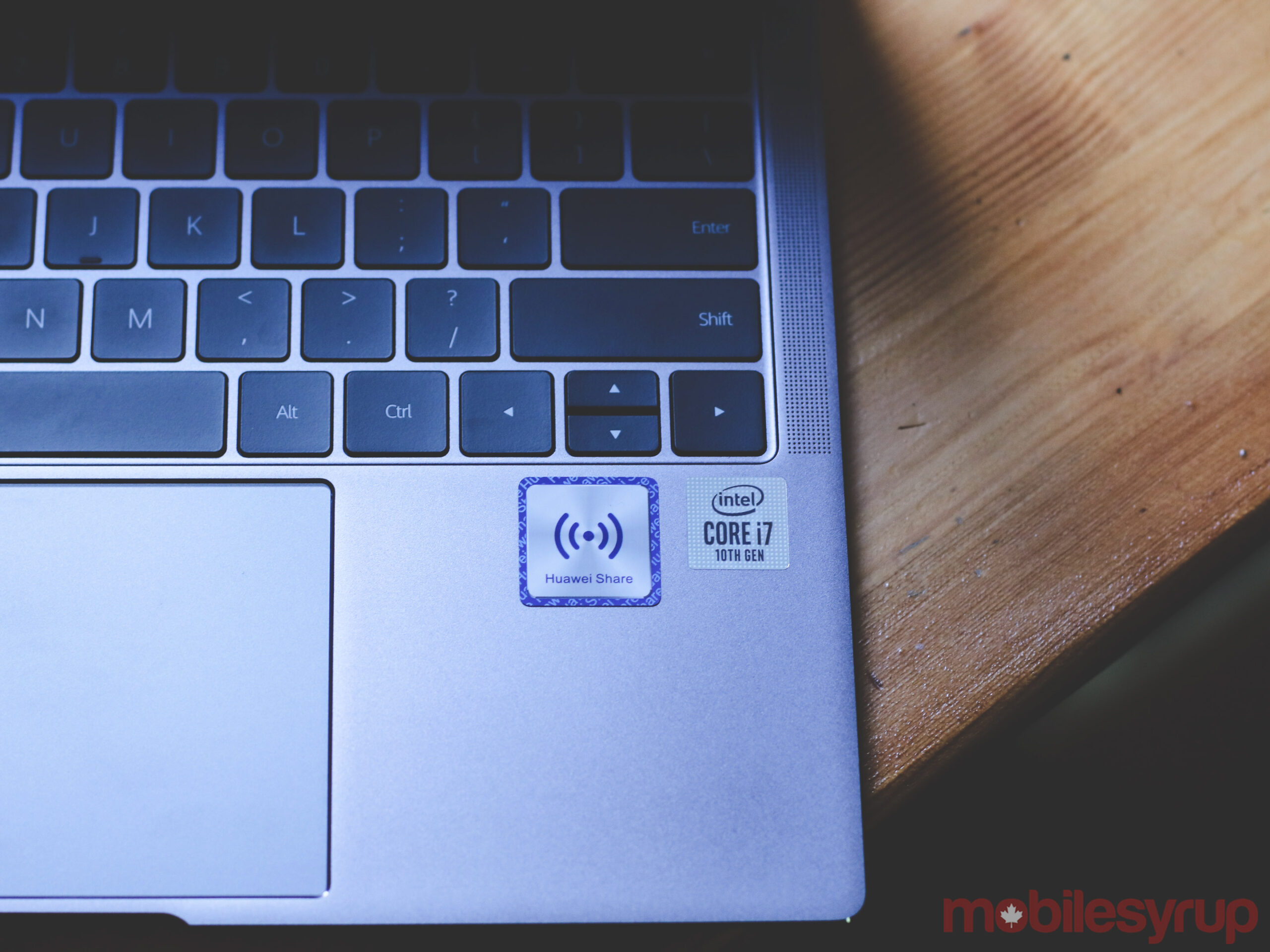 The speaker quality on the MateBook X Pro is top-notch and better than I expected. I’m able to hear notifications from a room away and can easily fill a room with music. However, don’t expect Sonos quality sound, though it is still excellent for a laptop.

The worst thing about the MateBook X Pro is its camera placement.

While I love how Huawei kept the bezels small around the display, the company has shifted the webcam in between the F7 and F6 keys. Typically, it’s hidden, which is great for privacy, but when you push down on the webcam button, it reveals the small camera. Unfortunately, the camera is at the same level as the keyboard, which means it’s positioned to look at your chest or stomach, depending on if it’s on a desk or your lap. This makes the webcam almost entirely useless unless you’re using the X Pro on your stomach or have the device propped up. 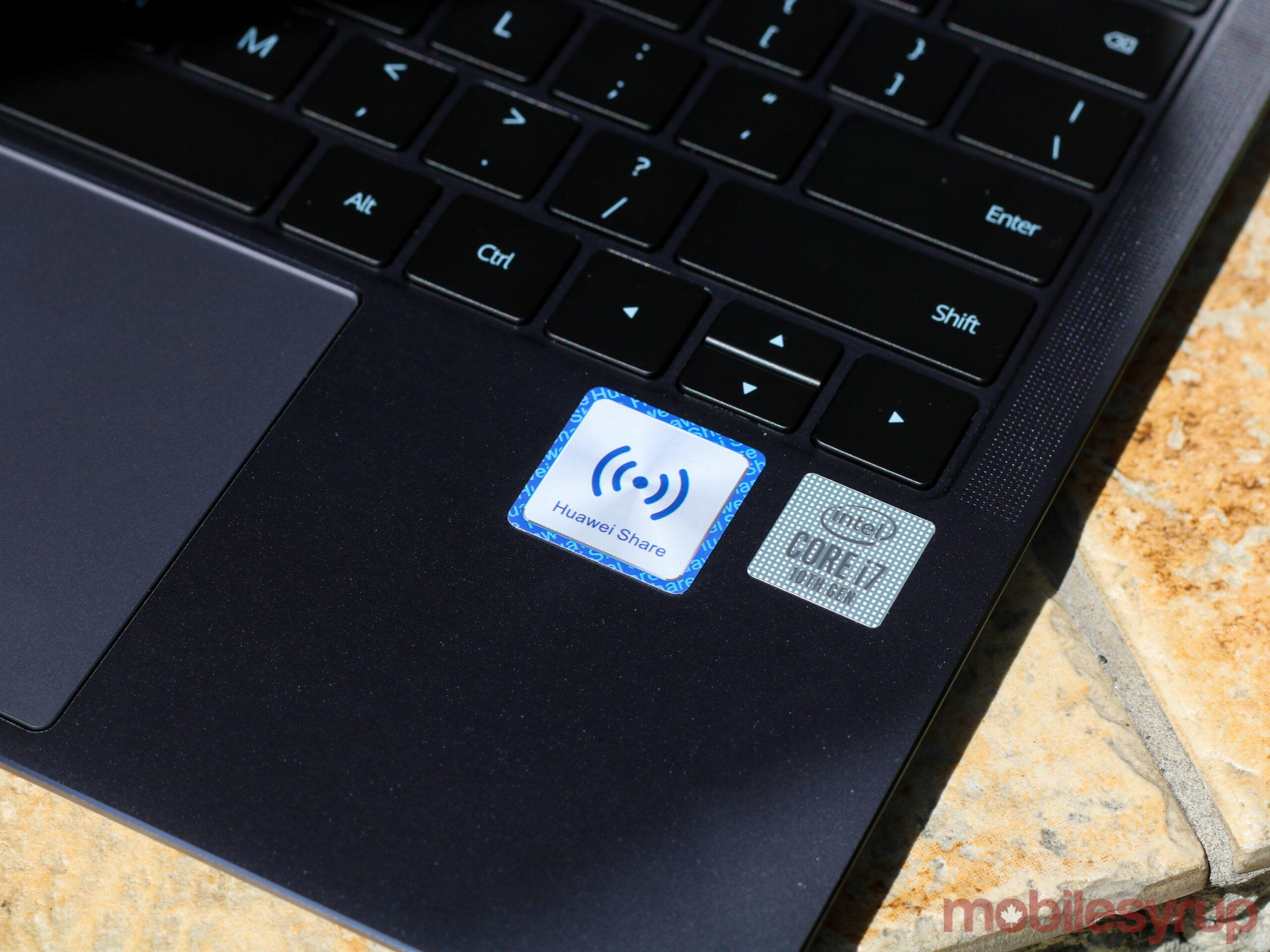 Huawei’s laptops offer a feature called Huawei Share. This allows users to share data from their Huawei smartphones to their Huawei laptop with a quick tap. The functionality is simple and it lets users easily drag and drop pictures, videos and more from their phone to their laptop and vice versa.

Huawei Share works by using an NFC tag to initiate a connection between your smartphone and the MateBook X Pro. Once launched, your smartphone streams its display to the MateBook, so you can see what’s on your phone’s screen from your laptop. It’s worth noting the feature is only compatible with Huawei’s devices, although some intrepid users say they’ve gotten it working with other Android phones.

People can use Huawei Share for multi-screen collaboration, answering calls and to continue videos started on a smartphone with the X Pro. You can also screen record the laptop’s display and it saves to your phone.

Huawei Share is easy to use and I had no issues with it, except for the fact that the laptop doesn’t actually have an NFC chip built into it. Instead, Huawei has placed an NFC-embedded sticker on the laptop, so if you remove the sticker Huawei Share won’t work. This is a strange move by Huawei and it would have been better if the NFC chip was inside the actual laptop.

NFC stickers are passive devices that don’t require any power. They work thanks to electromagnetic induction, which the tag uses to create a current with another coil of wire in the smartphone.

The Huawei MateBook X is a decent everyday laptop that looks great with a slim profile and beautiful design, and for the most part, offers a smooth and quick experience.

The large, crisp and beautiful display has been a pleasure to use especially when watching movies and editing photos. Huawei Share is great, and I love how seamless the experience is even if it relies on a sticker.

Unfortunately, Huawei has kept the webcam in a place that makes it difficult to use. Coupled with the laptop's high cost of $2,499 CAD, it's far too expensive for many to consider. The Matebook X Pro is the MacBook of the Windows world and if someone does mind dishing out $2,499 or the awkward webcam placement they won't be disappointed.

The Matebook X Pro is the MacBook of the Windows world and if someone does mind dishing out $2,499 or the awkward webcam placement they won't be disappointed