If you're looking for a powerful computer that won't break your back, the Gram is what you want 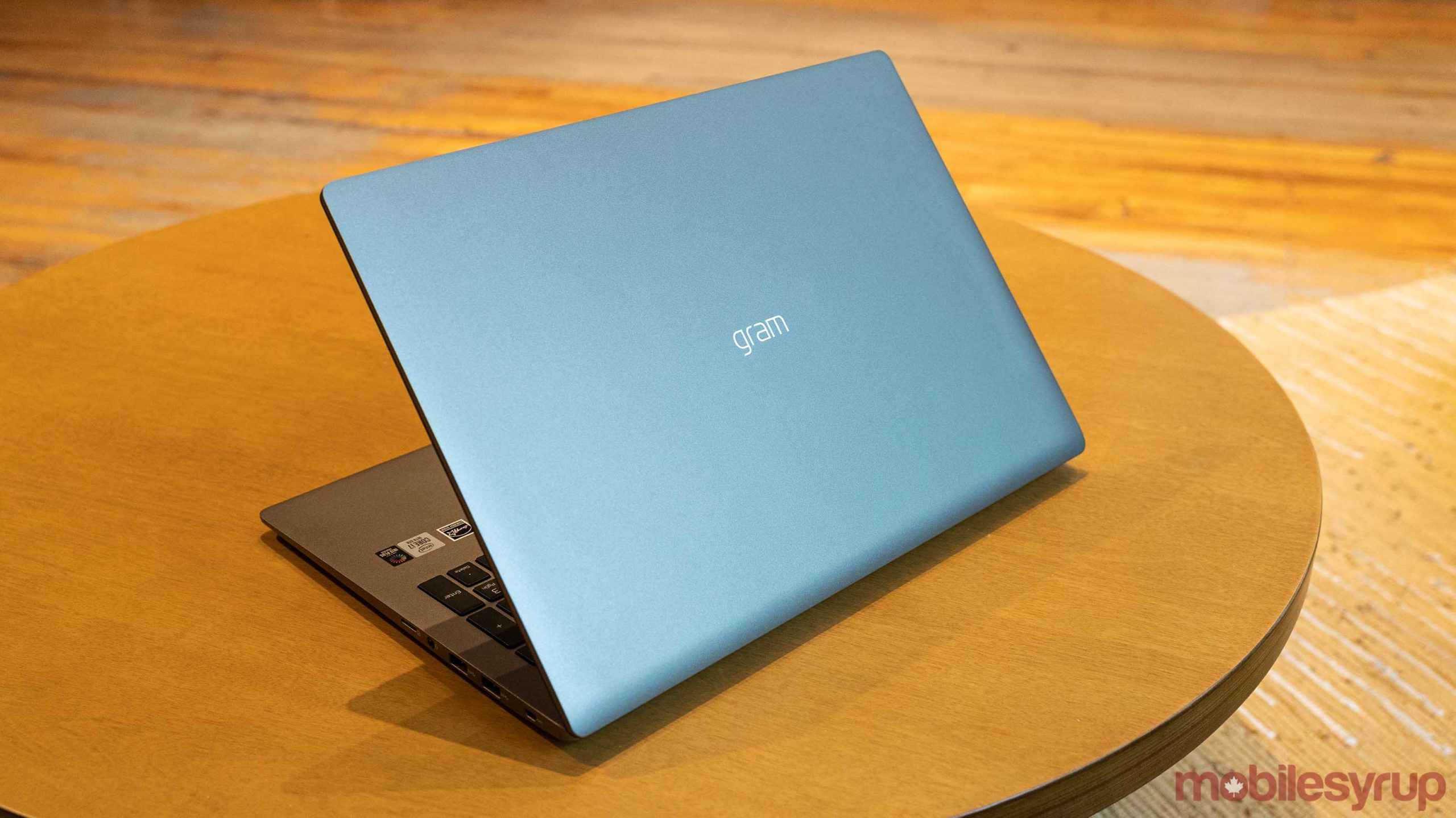 Typically, if you want a low-weight laptop, you have to look at ultra-thin, tiny notebooks that often don’t have a lot of power. However, LG is looking to change that philosophy with its new Gram laptops, which have made their way to Canada for the first time.

Available in three sizes (14-, 15.6- and 17-inch screens), the LG Gram line is phenomenally light without sacrificing power. LG Canada sent over one of the 17-inch models for me to test out and, after about a week of heavy use, I remain impressed by how light it is.

But, weight is not the be-all and end-all of specifications and, even if the Gram is impressively light, what sacrifices does it make to achieve that?

Well, not many. From performance to battery life, the Gram is a continuously impressive machine. 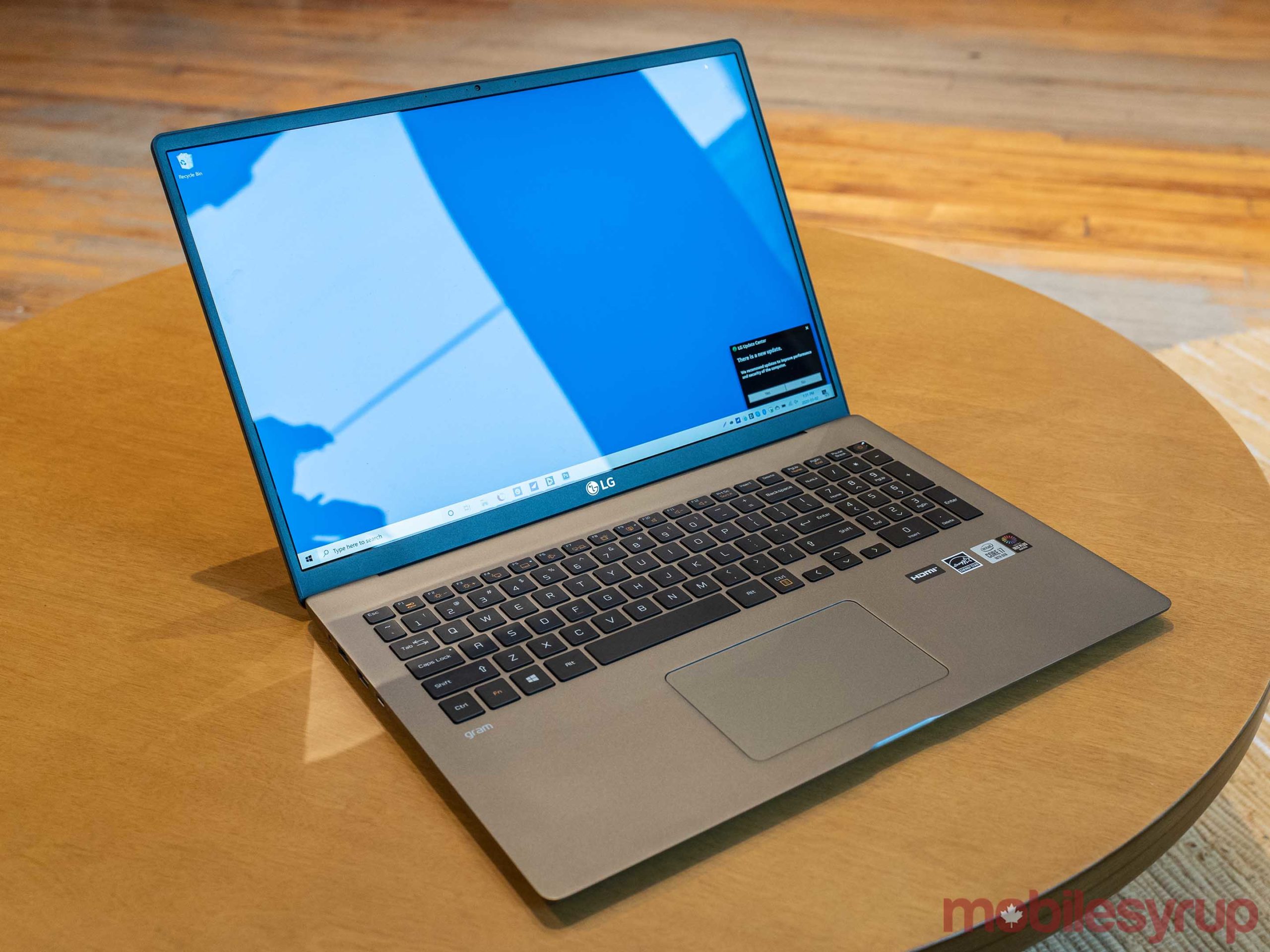 Let’s get the Gram’s biggest problem out of the way first. It’s light, and that’s great. But because it weighs so little, it also feels cheap.

Part of that is also because the laptop exhibits a lot of flex. If you pick up a MacBook or a Surface Laptop and put some force on it, it’s going to hold up. The LG Gram doesn’t feel like it will. The screen, for example, feels like it has a lot of flex and bend to it.

Likewise, the palm rest around the keyboard also has a lot of flex. In fact, if you press on the laptop between the spacebar and touchpad, you can see the body of the laptop flexing. Of course, it’s possible that’s a side-effect of the laptop being so large and stretching its magnesium alloy body across a wider area, but it’s not clear what’s behind the flexing. Either way, other than being a concern for long-term use, the flexing didn’t hamper the laptop’s functionality.

Despite this, I never had a concern about durability. LG says its Gram laptops are so durable that they passed the U.S. military’s MIL-STD-810G series of tests, which assess how well equipment stands up in severe conditions. 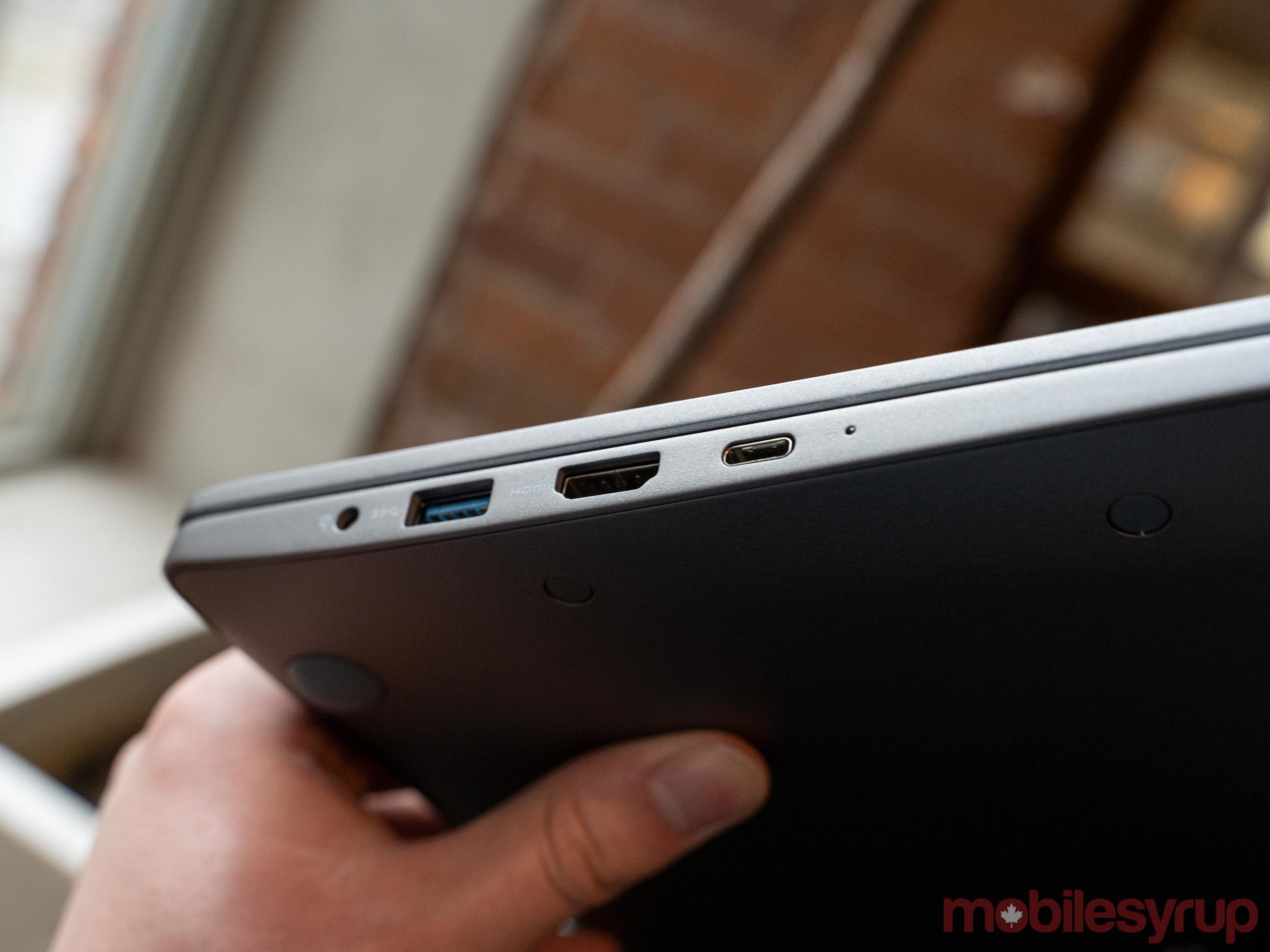 However, it’s worth noting that no commercial organization or agency certifies compliance with the standard and manufacturers can create test methods to fit their product. Ultimately, without more detail, it’s hard to put much stock in the standard. Plus, we weren’t able to run the Gram LG sent us through the gambit ourselves. That said, the Gram did hold up well under typical daily use, such as carrying it to and from the office in a backpack.

On top of this, the Gram also boasts a vast selection of ports, a welcome change from many of the other laptops I’ve used recently. The Gram includes an HDMI port, a USB 3.1 Type-C/Thunderbolt 3 port, three USB 3.1 Type-A ports, a headphone jack and a microSD card slot. It’s quite a solid offering for a laptop, especially one as thin and light as the Gram. 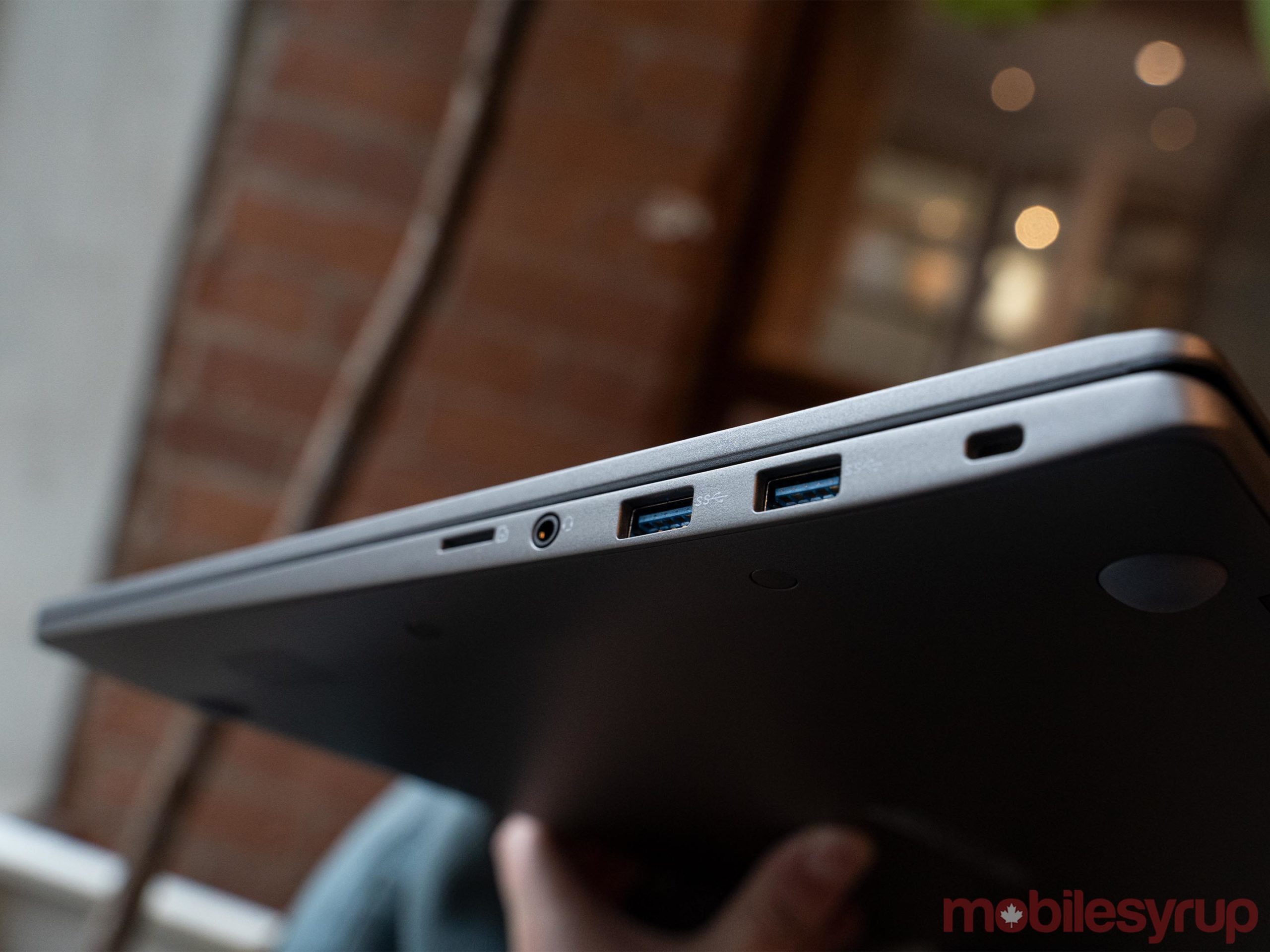 Another area the LG Gram impressed was in performance, mostly because this laptop is a marathon runner, not a sprinter. It performed well and did so over long periods of time thanks in part to its large battery.

The LG Gram I reviewed was the 17-inch model sporting a 10th Gen Intel Core i7-1065G7 CPU and 16GB of RAM — more than enough to handle most tasks I threw at it. From running a web browser, usually with 10 or more tabs open, to editing pictures in Photoshop, checking email and connecting with co-workers on Slack, the Gram never broke a sweat.

It also ran very quietly, due in part to the laptop’s unique internal cooling solution. An LG spokesperson told me that the Gram has an “enlarged fan” inside the chassis, which allows it to cool down quickly without being noisy. In practice, I found the Gram never got very hot. At most, the space above the keyboard would get warm after a long day of use.

The other significant benefit of having a big laptop like this is there’s a big battery on the inside. Both the 17-inch I tested and the 15.6-inch Grams boast 80Wh batteries, while the 14-inch has a 72Wh battery. While I can’t speak to the 14-inch, the 17-inch lasted about six hours for me at around 50 percent brightness with Slack, email, Photoshop, my web browser with about 10 tabs, and more running.

Of course, you can likely squeeze more (or less) out of the battery, depending on what you’re doing, what settings you’re using and other factors. Regardless, I was impressed by how long the Gram kept going. 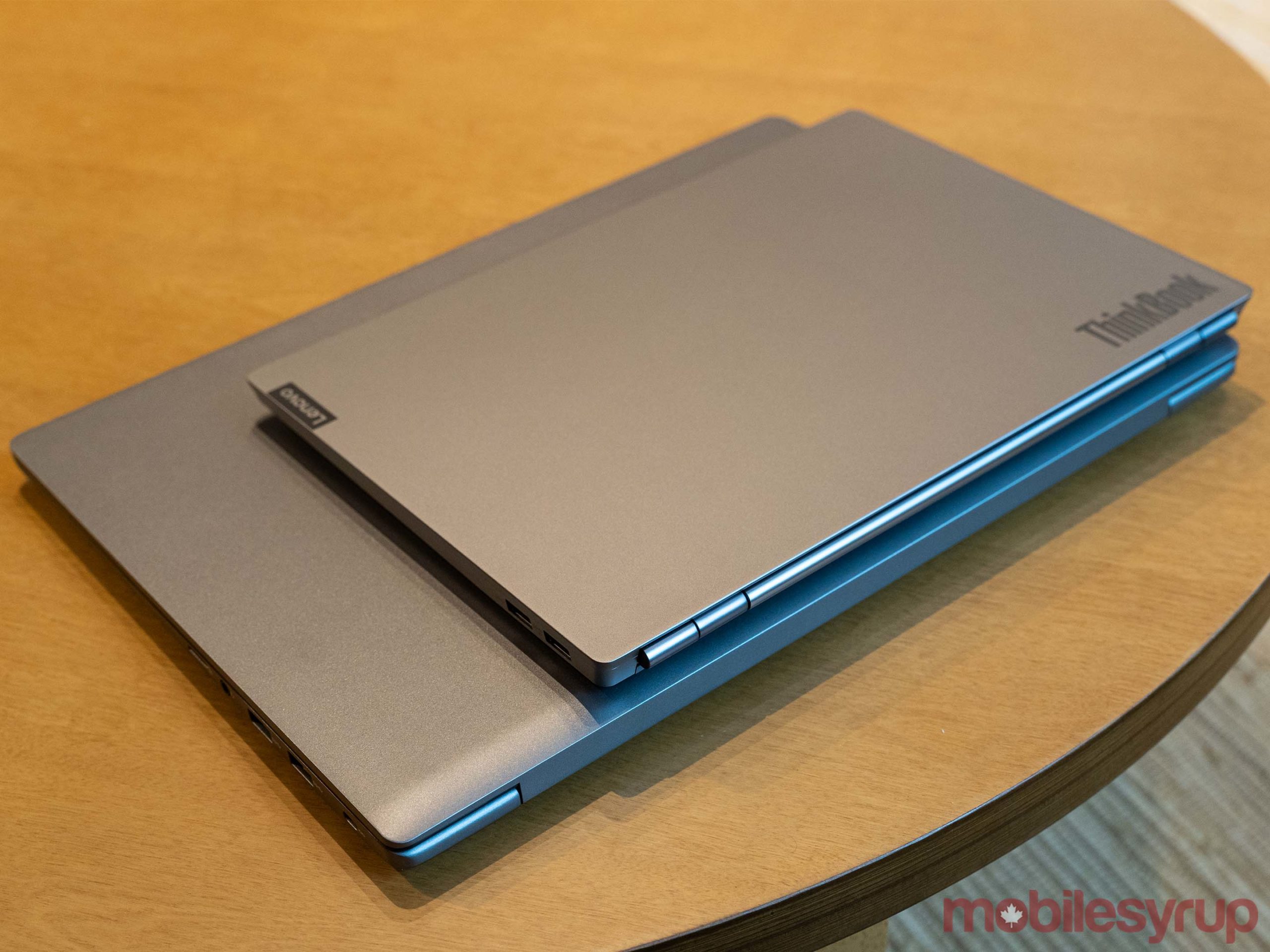 To start, I appreciate all the space I’ve got on this screen. There’s so much room to work (or play) and it’s just a wonderful productivity experience. There’s so much screen that I’m at times unsure what to do with it all.

Further, the 16:10 aspect ratio, which is just a little taller than the traditional 16:9, means that the screen fills the space much more and leaves much thinner bezels. It feels much more like the 3:2 aspect ratio on the Surface Laptop and is, arguably, the ultimate aspect ratio. Argue if you want, but 16:10 (or 3:2) is the best aspect ratio for being productive on a laptop.

Ultimately, if you like having a lot of screen, the 17-inch LG Gram is the way to go. Most other laptops I’ve tested that approach this screen size are massive, heavy gaming laptops. In other words, not something you’d want to carry around.

The Gram is the first laptop I’ve used that makes the 17-inch screen size portable enough to be worth having in a laptop. 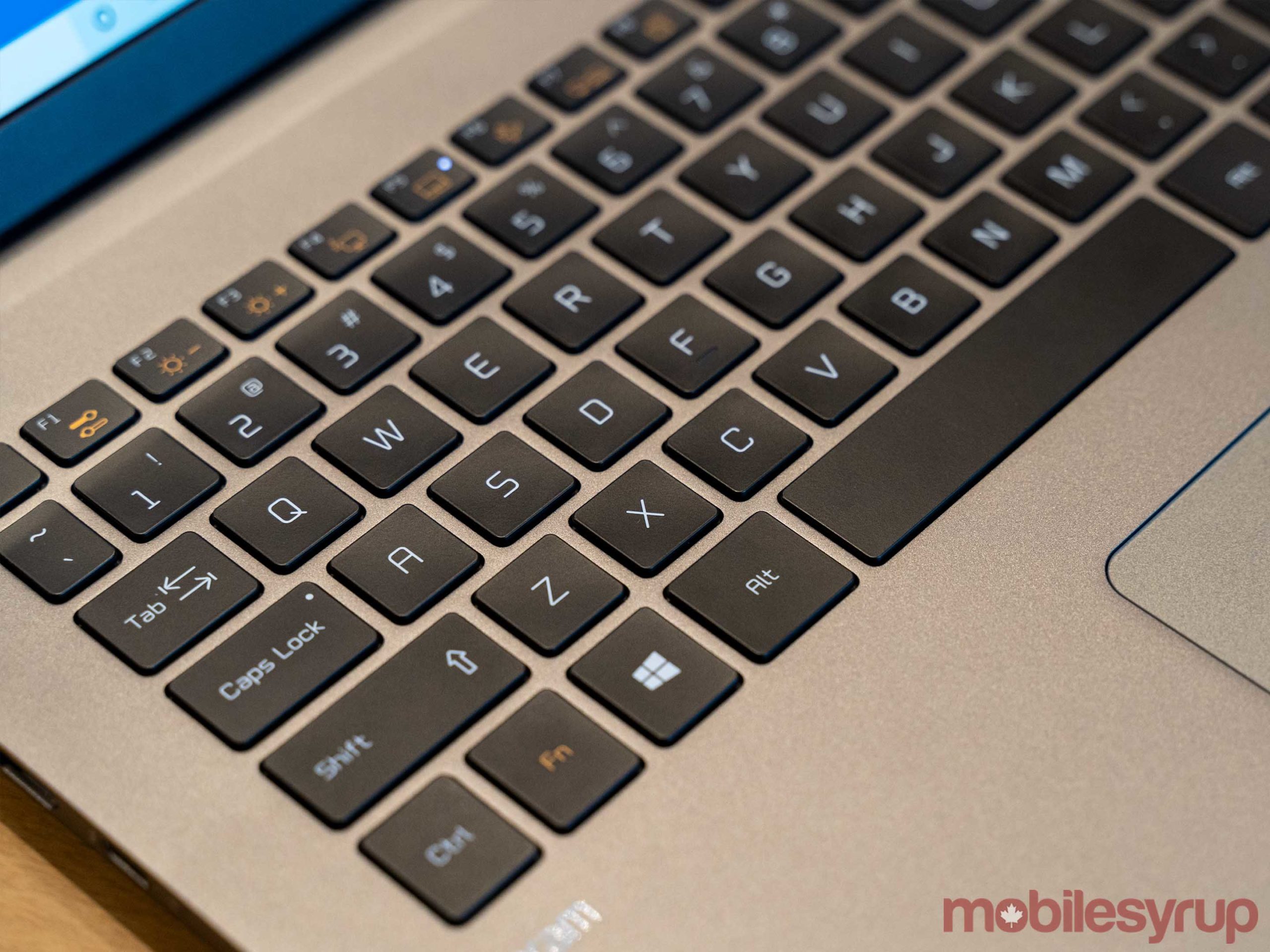 LG makes use of all the space on the 17-inch Gram by squeezing in a nearly full-size keyboard complete with a number pad.

As far as the typing experience goes, it’s spacious and comfortable for typing and generally a pleasant experience. The keyboard is clicky and tactile without being obnoxiously loud, which is a bonus. My one real issue with the Gram is that I often found myself accidentally hitting the number pad when reaching for keys like backspace or enter. Most egregiously, the num lock key is beside the backspace key, so I frequently toggled num lock on and off. It’s more a minor annoyance, though, and something you’ll likely get used to overtime.

Ultimately, I’d rate the Gram’s keyboard highly, but I don’t think it’s the best laptop typing experience I’ve ever had. That title still belongs to the Surface Laptop, but the Gram comes exceedingly close to matching it.

One caveat with the Gram is that, unlike some other popular Windows laptops, it sports a raised keyboard. Most laptops I test have a recessed keyboard and the tops of the keys end up flush with the rest of the palm rest. Not so with the Gram, which means that when you close the laptop, there’s some direct contact between the keys and the screen. 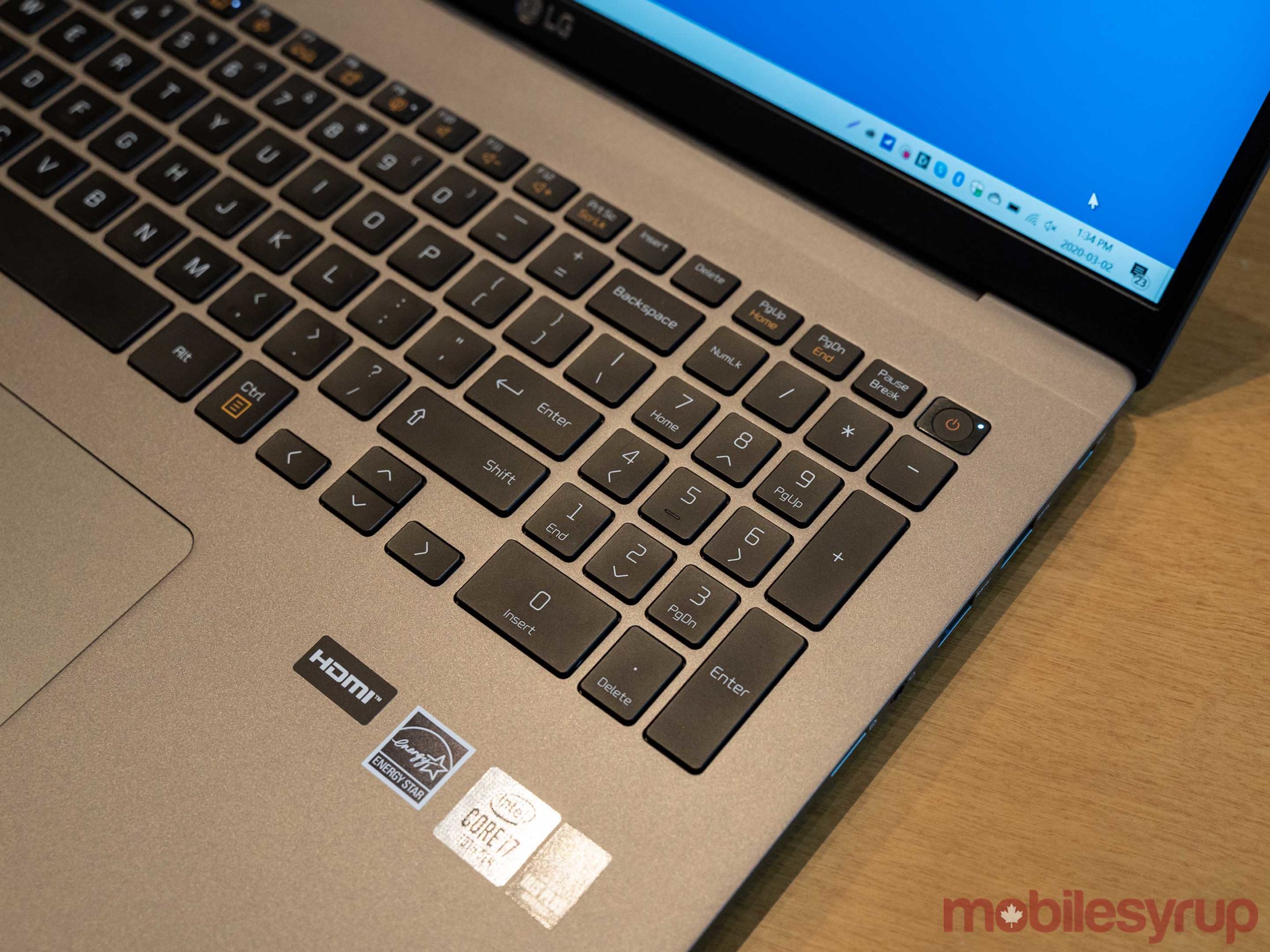 Resident MacBook user and MobileSyrup managing editor Patrick O’Rourke can attest to just how much of an issue this can be. One of his biggest gripes with the MacBook is that it’s slightly recessed keyboard doesn’t do enough to prevent contact between the screen and the keys when the laptop is closed, which leads to dirt, scratches and other potential damage.

While that was a concern with the Gram, thankfully the screen is recessed slightly, which generally seems to reduce contact. However, it doesn’t eliminate it and, given the amount of flex this laptop has, a small amount of pressure will likely squeeze screen and keyboard together.

In other words, despite the Gram being incredibly light, portable and generally great for throwing in a backpack, you may want to be careful not to put too much weight on it. 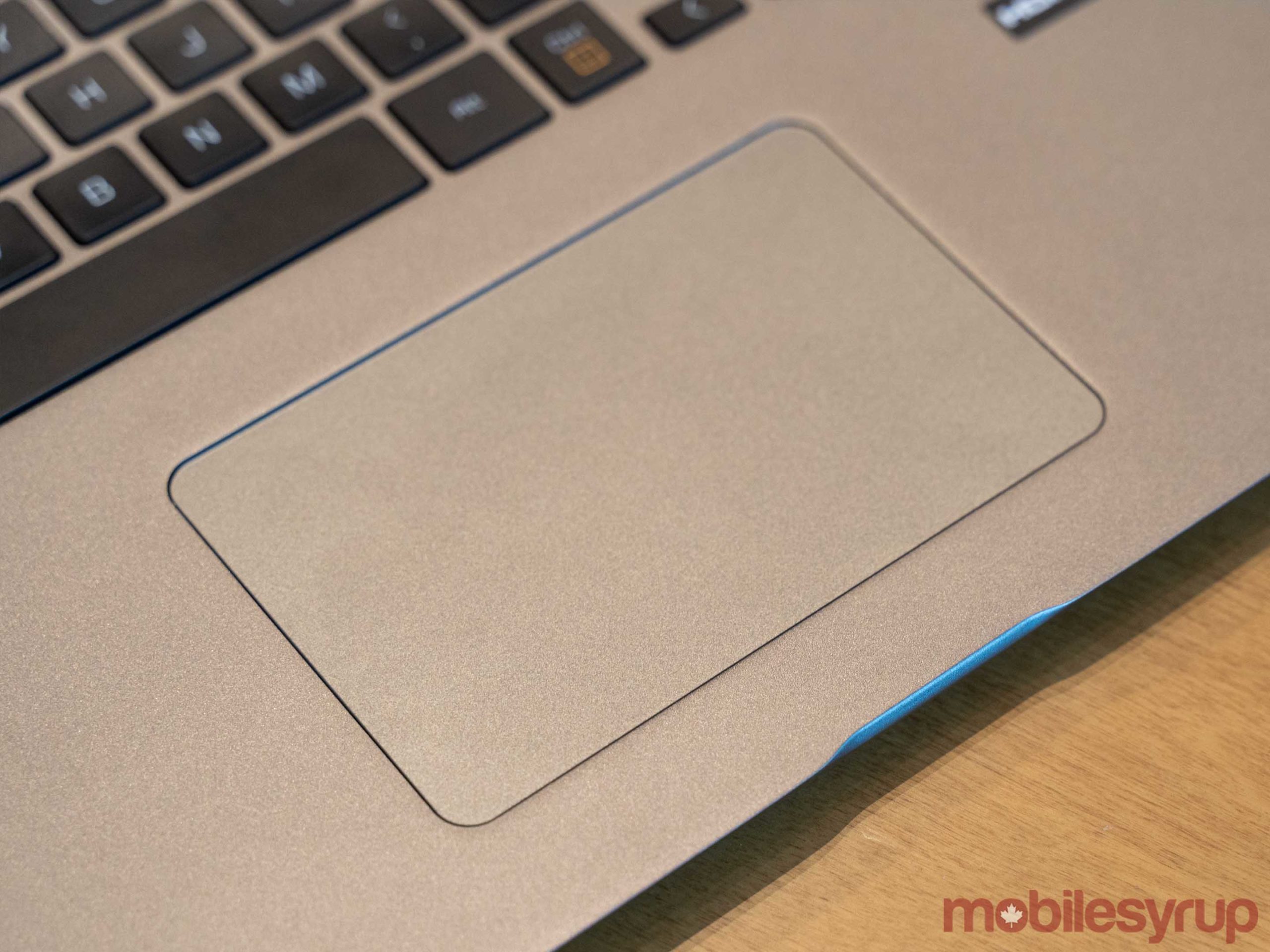 Finally, a manufacturer listened to us tech reviewers and put a decent-sized touchpad in a Windows laptop. The LG Gram has a large trackpad that is an absolute joy to use. It’s smooth, feels great and is big, massive and wonderfully huge.

One of my longest-running and biggest gripes with Windows laptops are the consistently small and/or terrible trackpads. Most are bad, and the few good ones — like on the Surface Laptop — just aren’t big enough.

The trackpad on the LG Gram, however, is neither of these things. Sure, it could be bigger on the 17-inch and more adequately use the available space, but it’s already so far beyond what’s available on other laptops, that I’m more than satisfied.

Unfortunately, the trackpad also serves as another example of the Gram’s questionable build quality. While it’s a clicky, tactile trackpad, pressing it down opens an uncomfortable large gap between the edge of the trackpad and the body of the laptop. My main concern is that the gap could allow dirt or debris to get underneath the touchpad and potentially cause some damage.

The Gram ships with less bloat than other Windows laptops 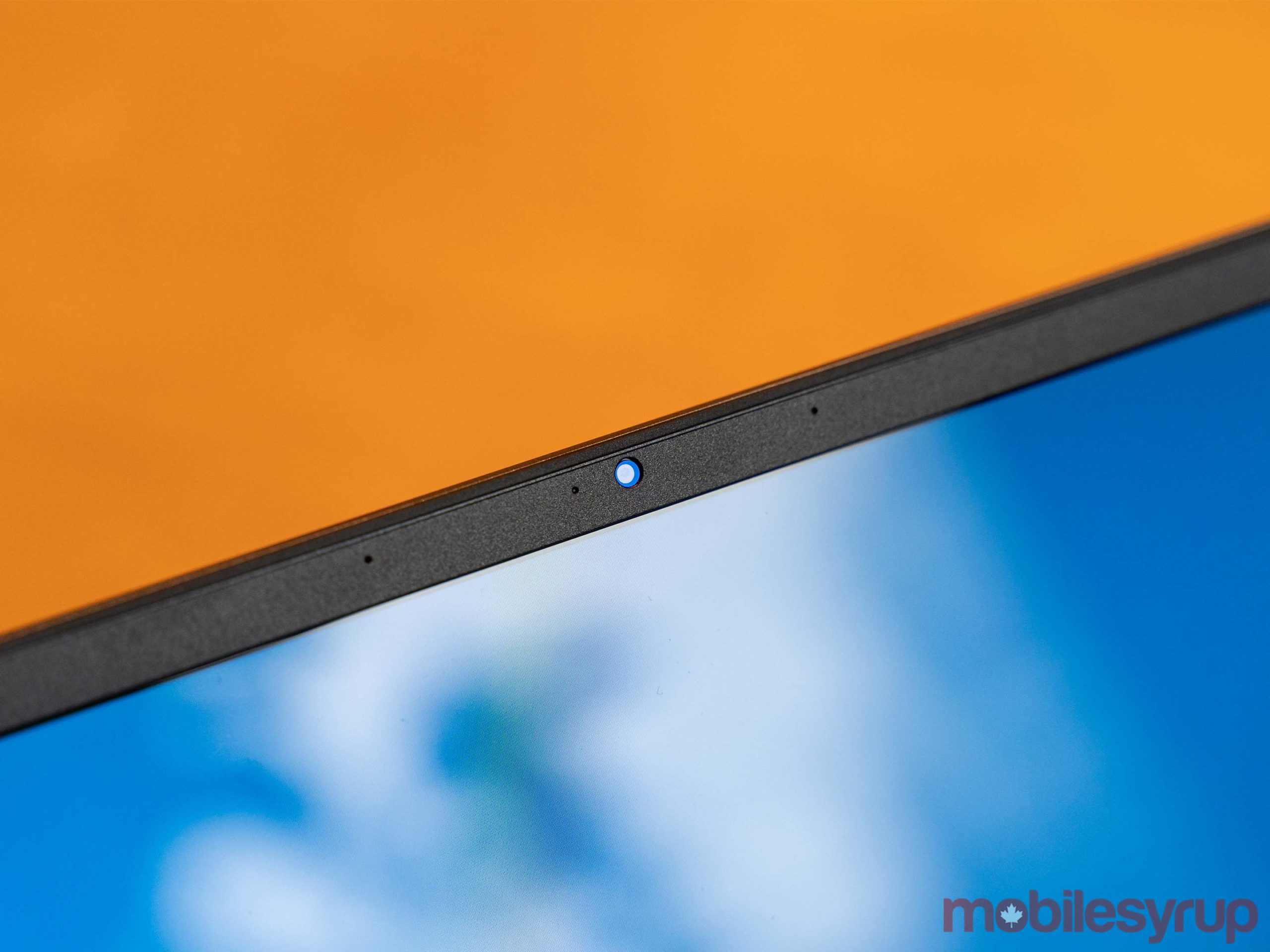 Finally, LG also nails the bloatware aspect of Windows laptops. Unlike most laptops I test, which come with several pre-installed apps from the manufacturer plus a bunch of other junk I don’t need, the LG Gram had next to nothing pre-installed, save a few LG apps.

Further, most of these apps are welcome additions, or at least things that I don’t mind having even if I don’t use them. For example, there’s a built-in guide app for teaching new users about the laptop, a ‘control center’ app for adjusting various settings like display temperature and keyboard backlight, and more.

For the most part, I didn’t find I needed any of the included apps, but some of them were nice to have in case I did need to adjust something.

One exception to this was the ‘LG Update Center’ app, which annoyingly pinged me updates for “critical updates” that weren’t actually critical or necessary. After a bit of digging, I figured out how to turn off the notifications and moved on, but I can see that app being a frustration for users who aren’t as technically savvy.

The heaviest part is the price tag 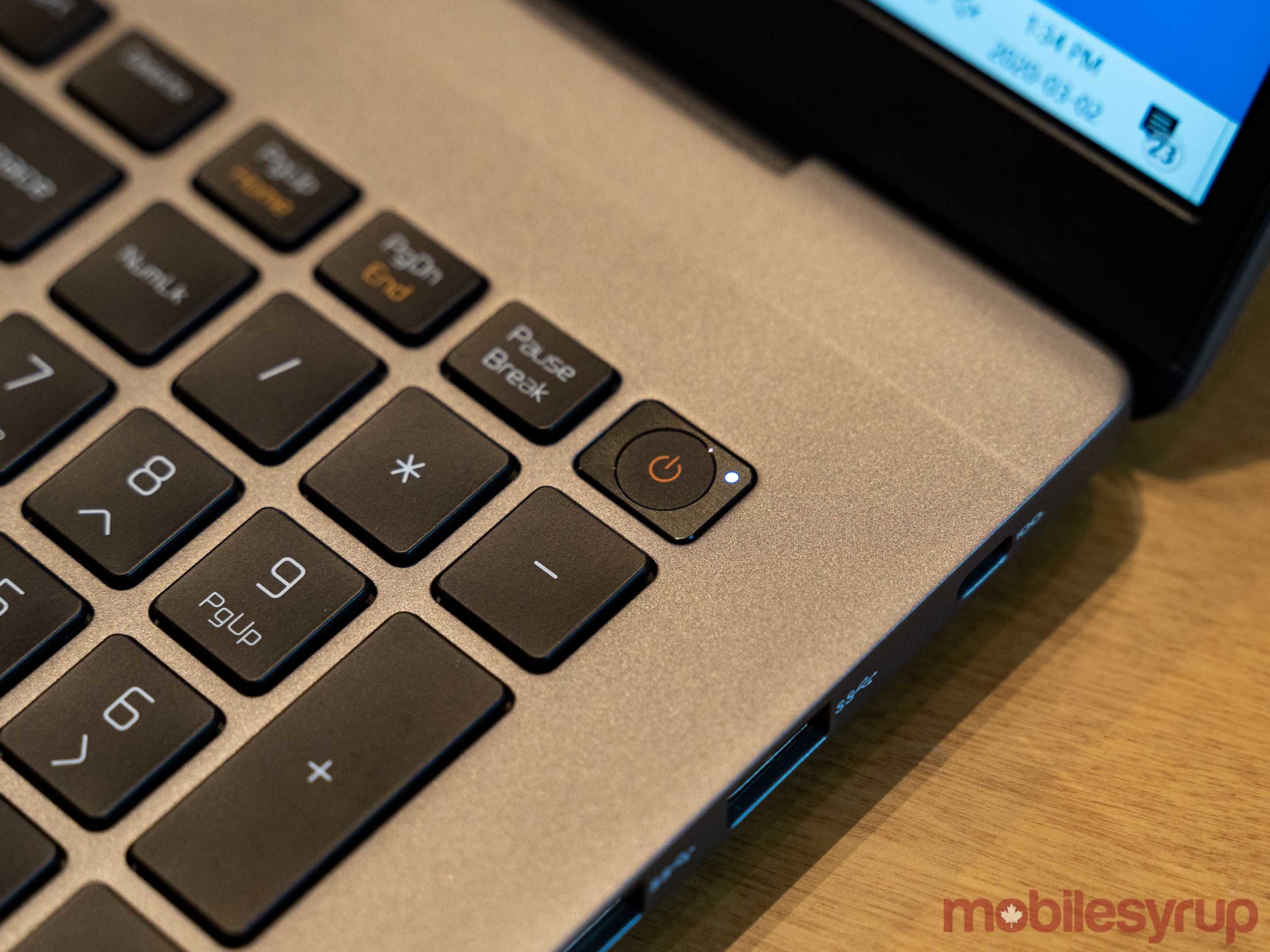 Ultimately, the LG Gram gets a lot right, especially compared to other Windows laptops. It’s light, portable, offers a massive screen and all while putting out consistently excellent performance. Plus, it has solid battery life.

Further, the Gram offers plenty of ports and an excellent fingerprint scanner built into the power button.

Unfortunately, there are also a few things it misses. The webcam is poor quality and doesn’t have a privacy slider like many other laptops. LG opted for a proprietary charging solution that doesn’t have fast charging. To be fair, the laptop does support charging over the included Thunderbolt 3 port, but I didn’t have a compatible charger that would power it.

However, by and large the laptop's greatest flaw is its build quality. The flexing in the keyboard and screen, as well as the gaps when pressing the touchpad, leave me concerned about how well this laptop will hold up over a longer period of time.

Combined with the laptop's high price, it makes for a tough recommendation. It's light, portable and powerful, which makes for a great combination. But at $1,599.99 starting price ranging up to $2,199.99 (the value of the review unit LG sent me), it's a lot of money to ask for something that feels this flimsy.

Ultimately, the best advice I can offer is to head to your local Canada Computers or Costco locations and see one for yourself. It's a laptop you really have to hold to make a decision about what you prefer: low-weight or sturdy construction.

The Gram doesn't do both.