Just like we have with nearly every major smartphone release from the last few years, we’re taking a look at a few of handset case maker Spigen’s top cases for Samsung’s soon to be released Galaxy S20, Galaxy S20+ and Galaxy S20 Ultra.

While all the cases are very similar to those available for other smartphones, there are also a few changes worth noting.

Let’s get into it. 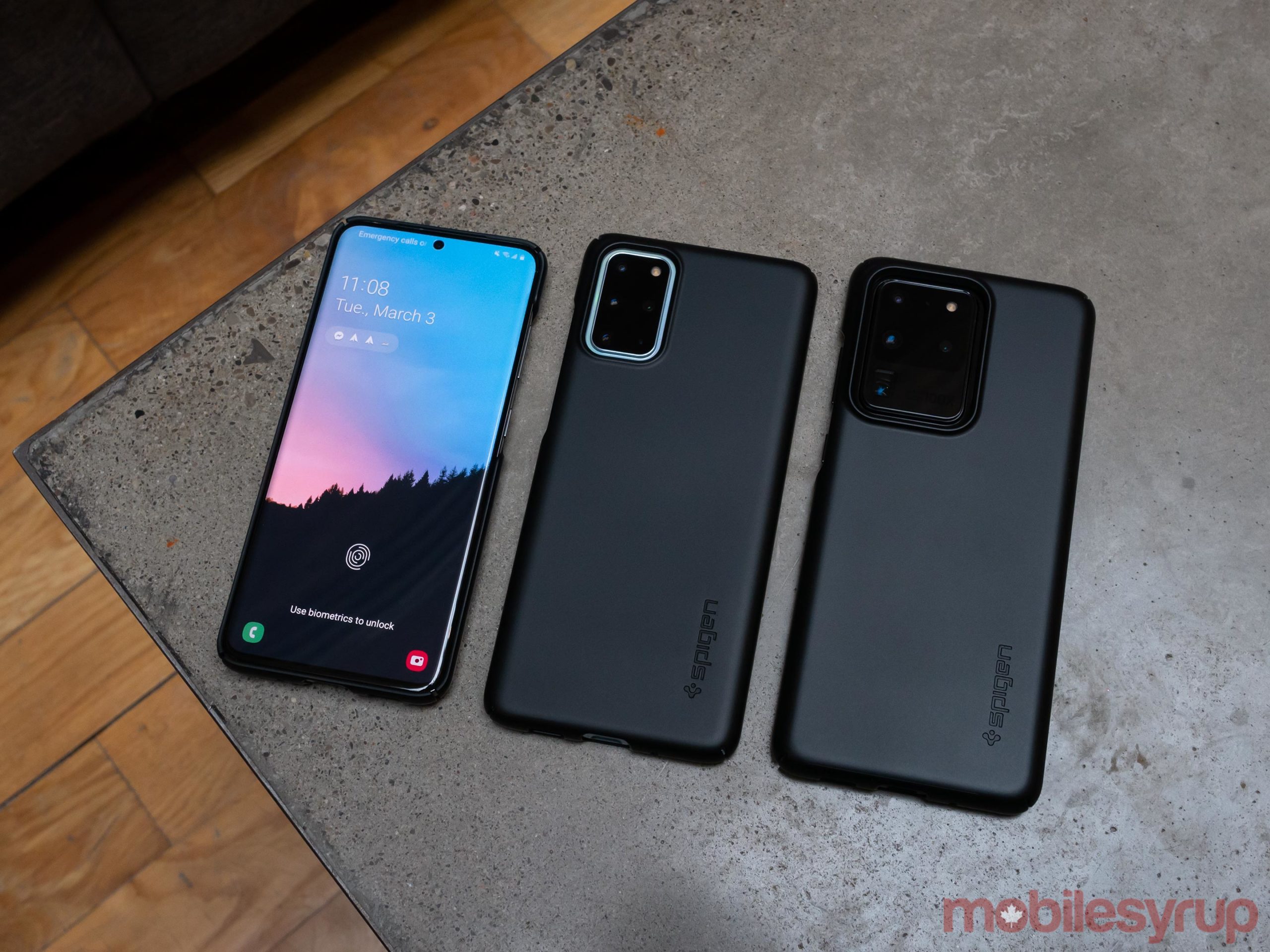 If you want to protect your new Galaxy S20 series device but still show off its sleek body, Spigen’s Thin Fit case is the best option around. It offers a decent amount of protection, including covering the entire rear of the phone with precise button cutouts, while also not adding unwanted bulk to the device.

That said, if you want to protect your pricey investment in a Galaxy S20, nearly all of Spigen’s other cases offer more protection. 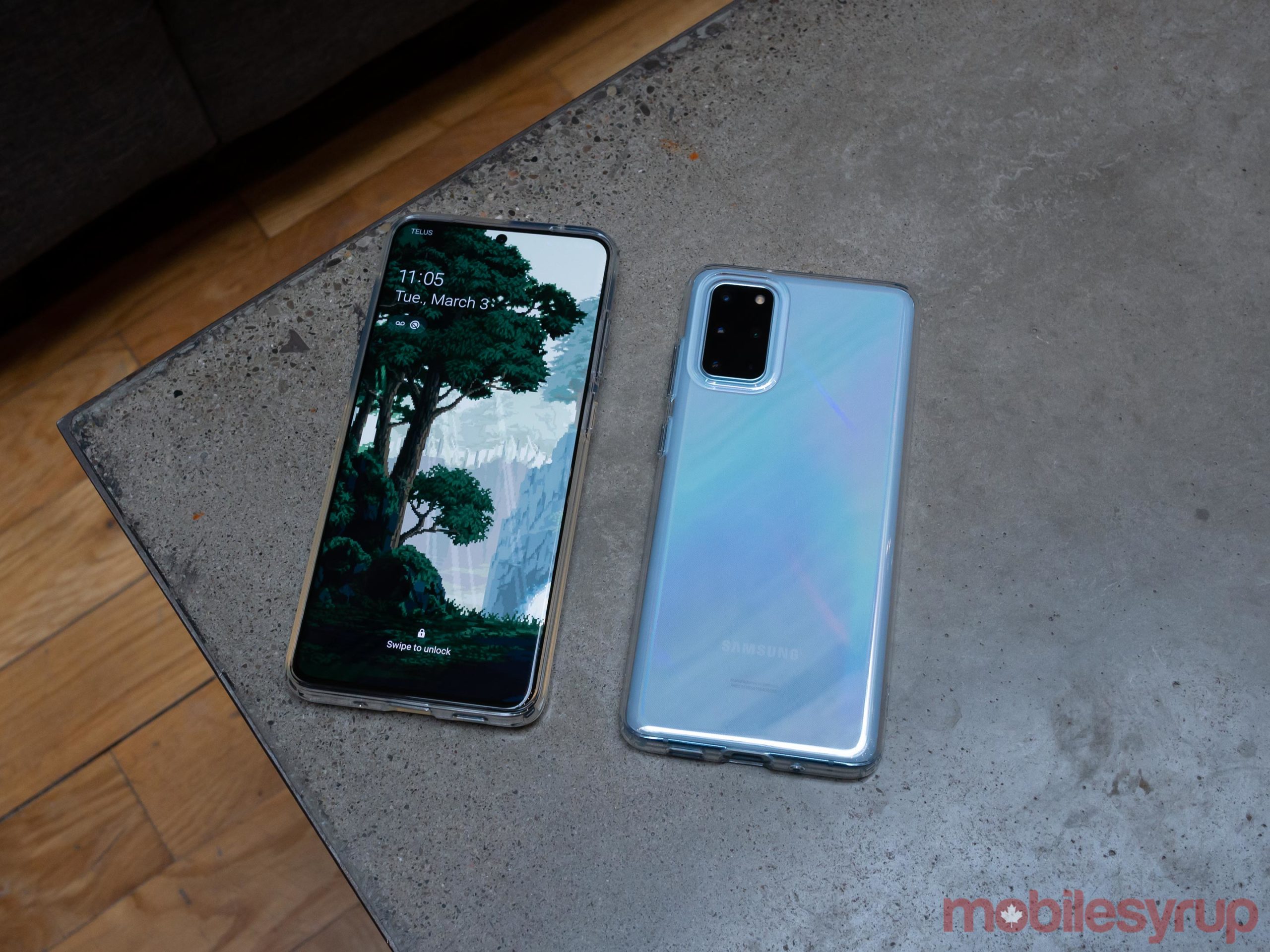 The rear of the S20 series is stunning, whether you opt for the ‘Cloud Blue,’ ‘Cosmic Gray’ or ‘Cosmic Black’ variant of the smartphone (these are the only colours available in Canada). That’s why transparent cases are great — they protect your smartphone while still allowing you to show off its flashy back.

Spigen’s Liquid Crystal case covers all aspects of the phone, including even its buttons, while leaving its back completely unobstructed. The case is also a little stickier than the company’s Ultra Hybrid variant, which could be a good thing if you’re looking for a way to have a better grip on the sizable Samsung Galaxy S20 Ultra. 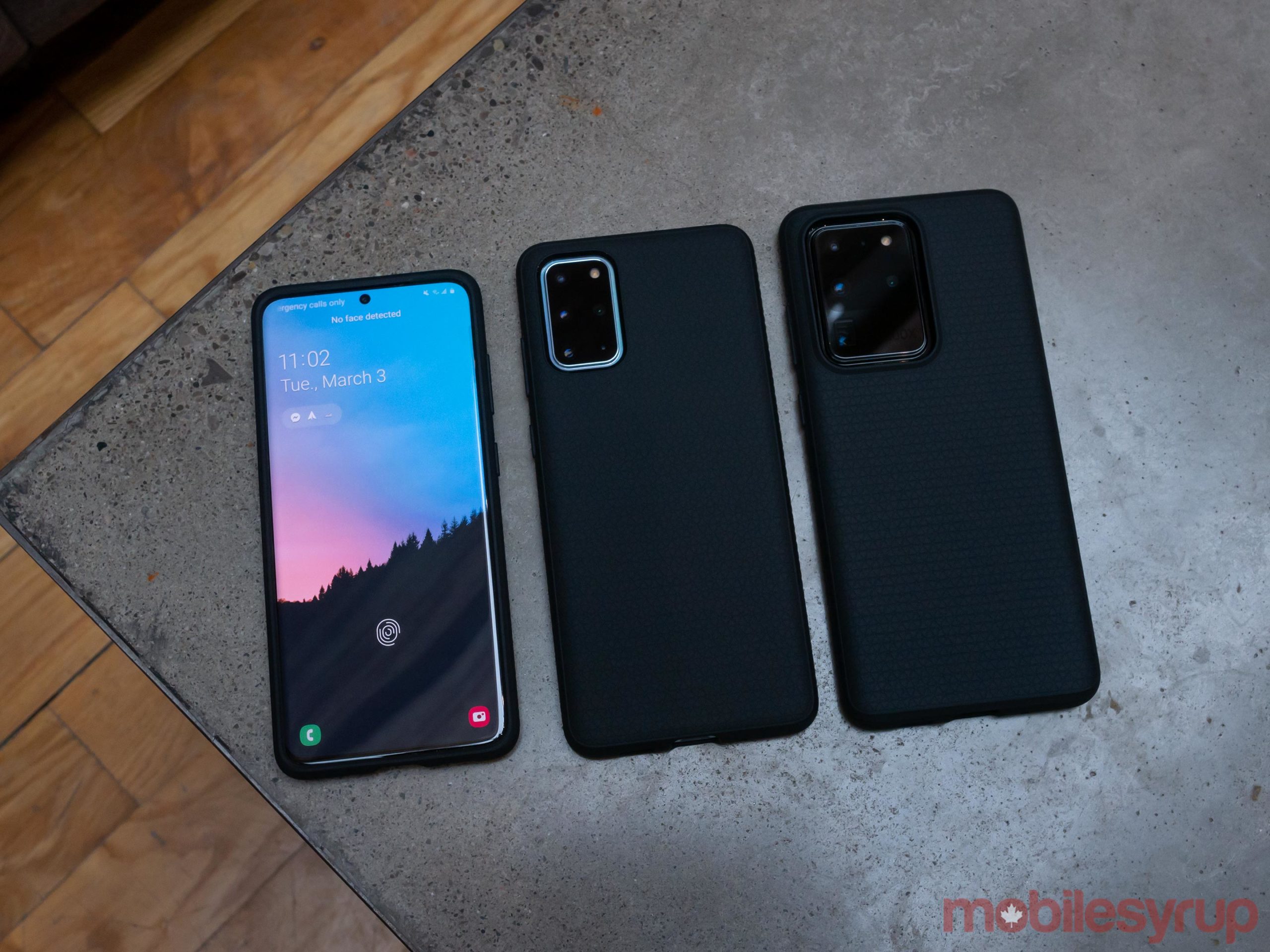 If you’re not concerned about showing off the S20 series’ back and just want to protect the smartphone, Spigen’s thin Liquid Air case might be the enclosure you’re looking for. It doesn’t feature a dual-layer design like the Tough Armor case, but it does protect all aspects of the phone, including even the S20 Ultra’s big rear camera bump, thanks to a ridge that runs around its cutout (other Spigen cases feature this design, too). 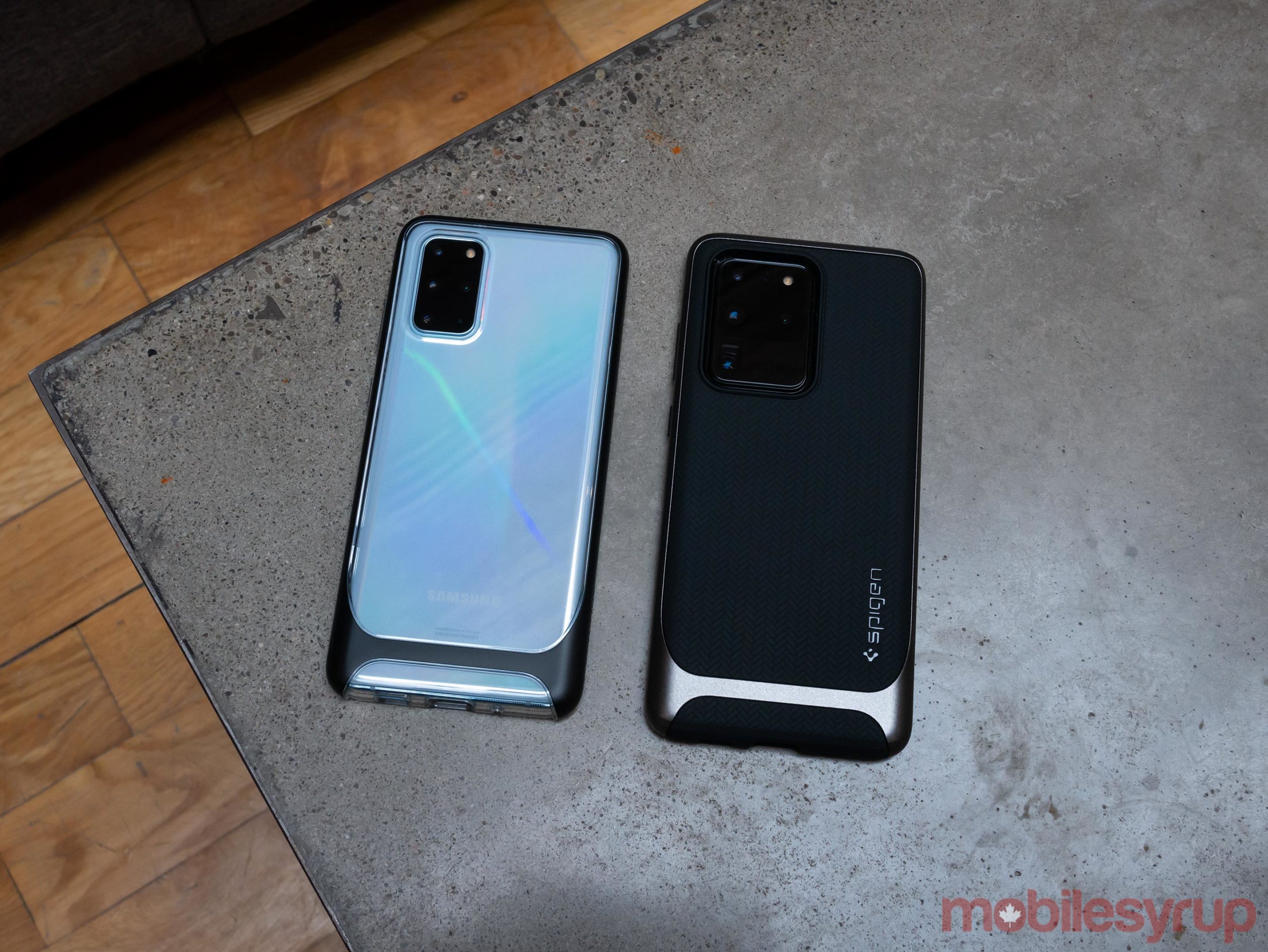 While a little bulkier than some of the cases included in this round-up, the S20 series’ Neo Hybrid case features a texturized back for added grip, coupled with a dual-layer design that helps it survive accidental drops unscathed.

There’s also now a ‘Crystal’ translucent version of the case that still shows off the rear of the S20 series. In some ways, the Neo Hybrid Crystal is nearly identical to Spigen’s Ultra Hybrid case, only with the added protection the dual-layer design provides. 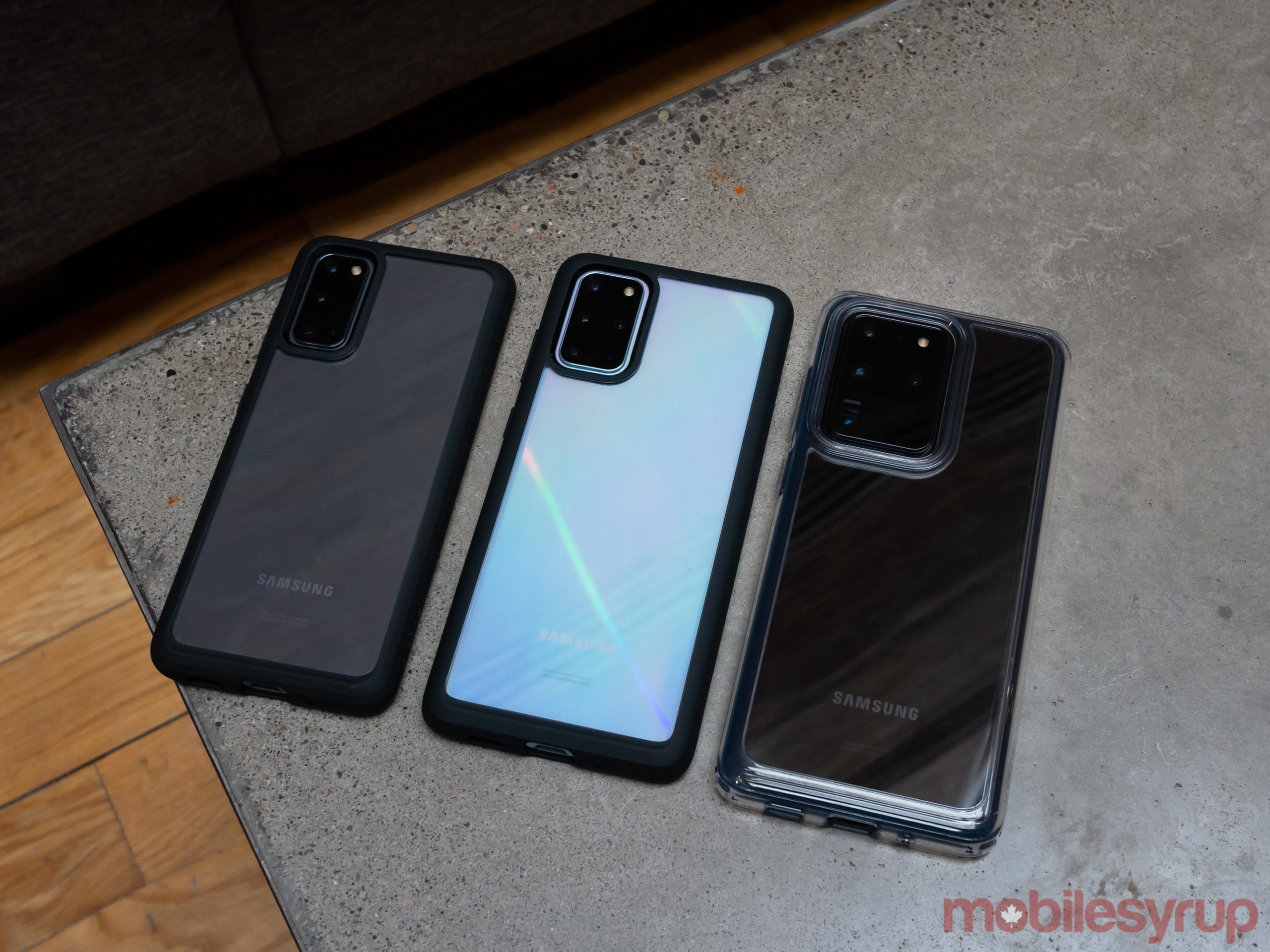 As always, the Ultra Hybrid S20 series case comes in two variants; one that features black bumpers that run around its circumference and another that is entirely translucent, including even its bumper edges. Both cases feature the same amount of protection, but the entirely transparent variant shows off the Galaxy S20’s flashy exterior better.

The case also features precise cutouts, just like Spigen’s other cases, along with a raised rim running around the edges of the S20’s camera to prevent its several camera lenses from getting scratched. 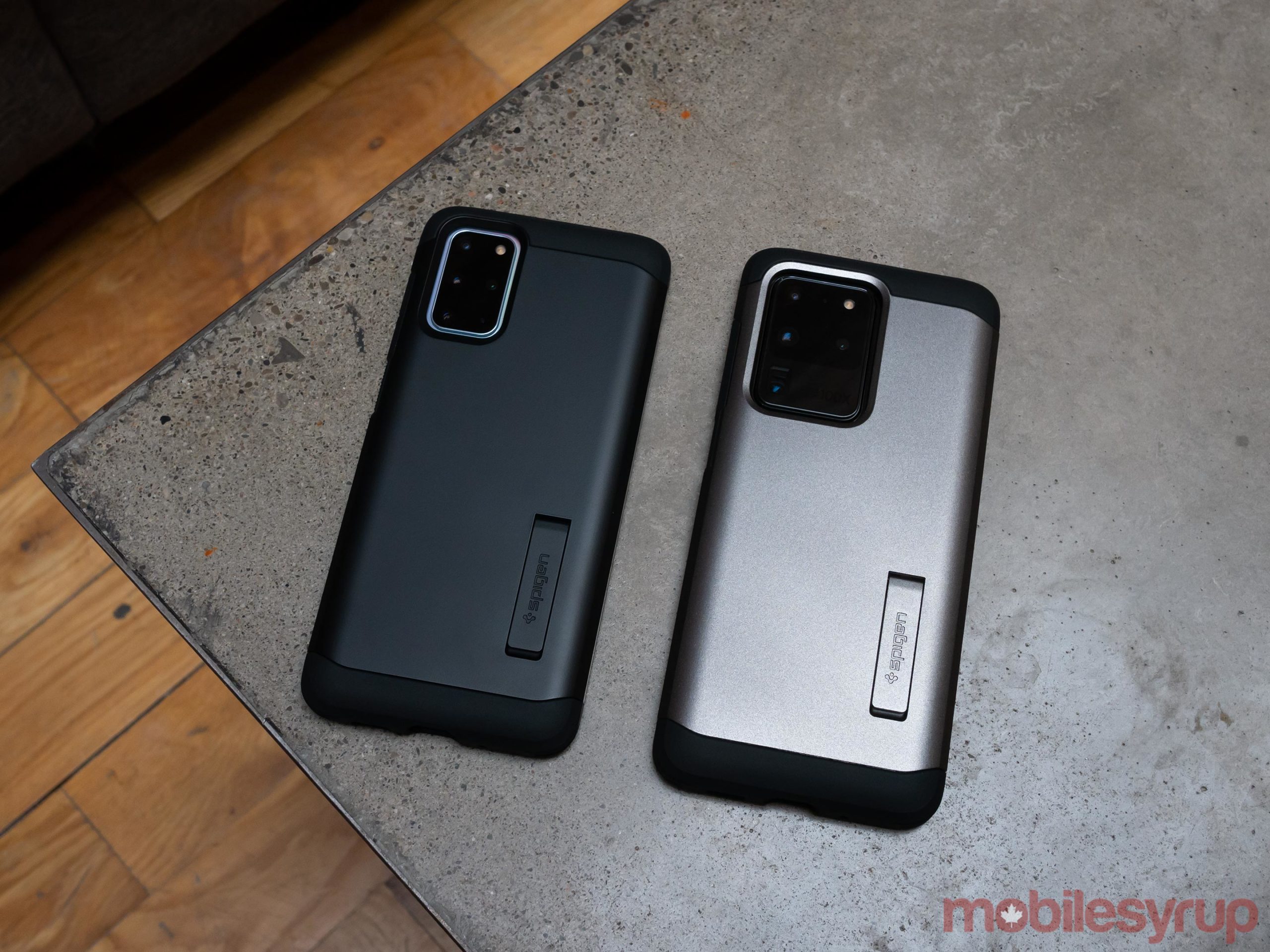 The Tough Armor case for the S20 series remains one of Spigen’s most heavy-duty offerings. The dual-layer design offers ample protection to the smartphone, complete with covers for all of its buttons, and, of course, a ridge that runs around both the display and the rear camera bump to protect the device’s glass.

Just like every version of the Tough Armor case, there’s also a kickstand on its rear that’s great for propping the phone up on a table to watch videos. 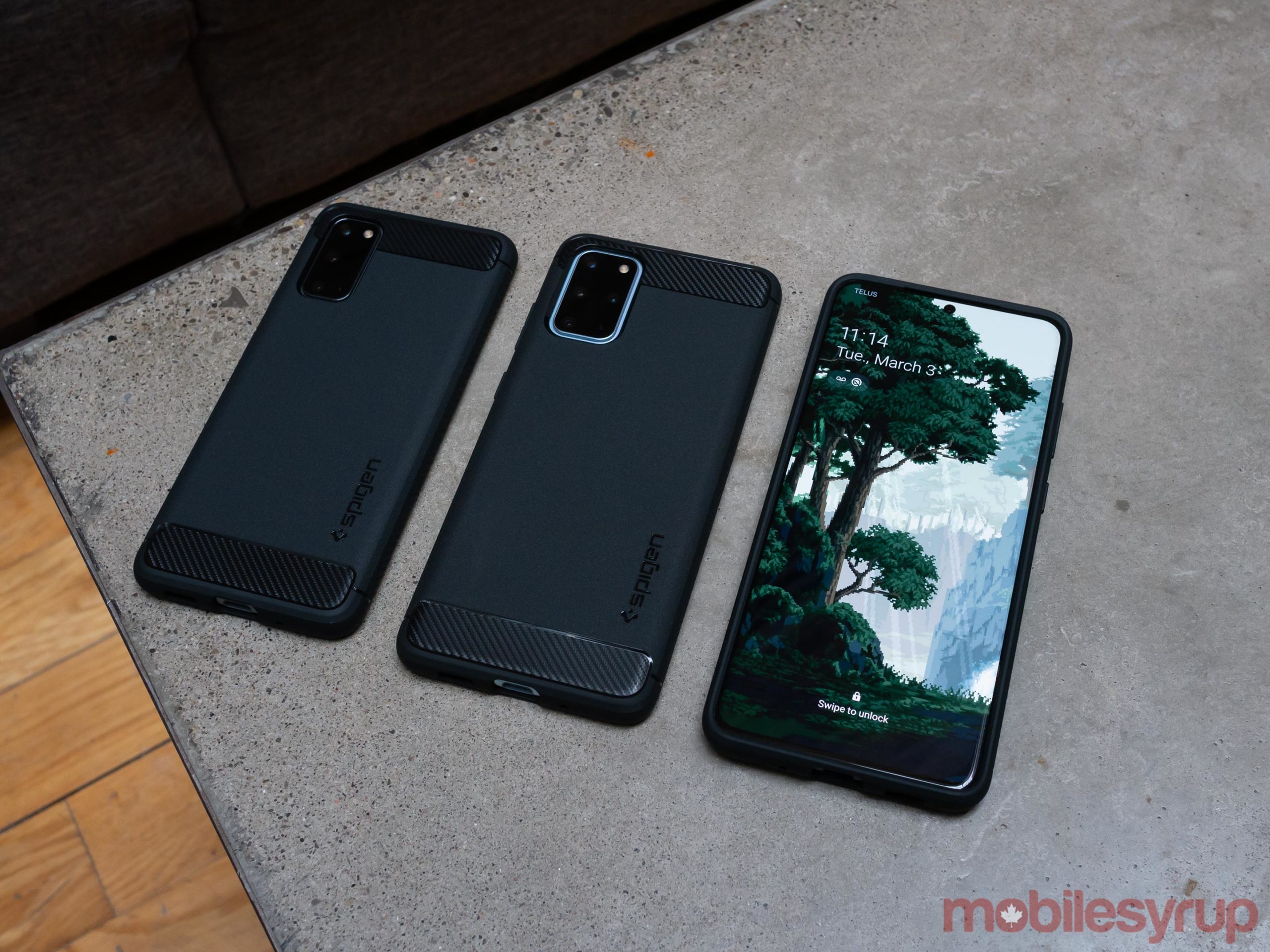 If you want a little more protection than Spigen’s Liquid Air case offers, but aren’t interested in jumping up to the admittedly bulky, dual-layer design of the Tough Armor or Neo Hybrid enclosure, the Rugged Armor case could be what you’re looking for.

This case features great protection, a matte rear, button covers and a unique geometric pattern that helps it stand out. 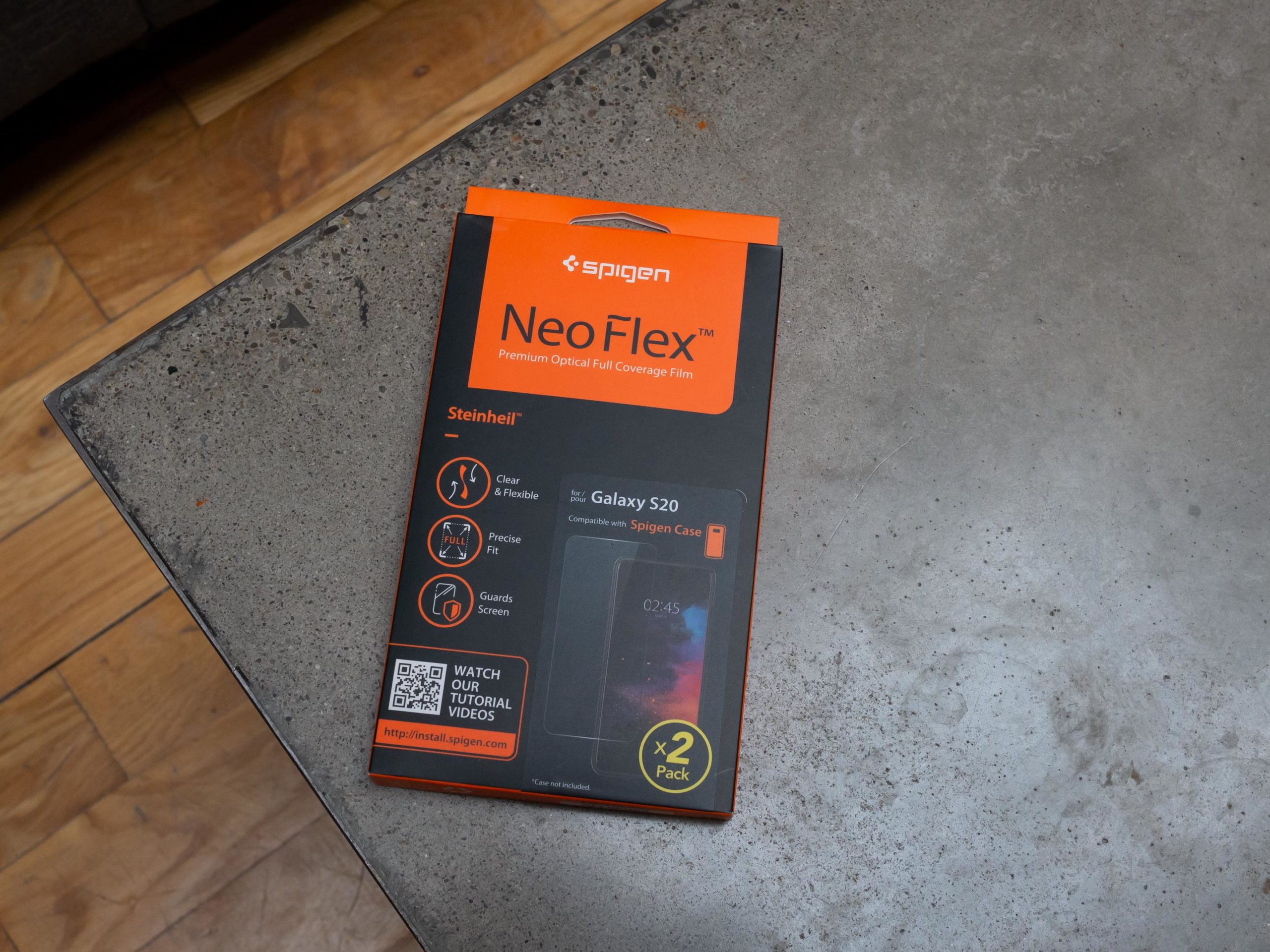 Along with several cases, Spigen is also offering a screen protector for the Galaxy S20, S20+ and S20 Ultra. While Samsung’s latest S series flagship comes with a pre-installed screen protector, if you’re looking for a backup, the NeoFlex is a viable alternative.

Keep in mind that this isn’t a glass display protector and is instead a wet-application plastic cover. That said, the application process is straightforward and only takes a few minutes. It’s also important to note that NeoFlex works with the S20’s ultrasonic in-display fingerprint scanner.