The BlackBerry CEO touched on the global smartphone industry, his company’s pivot to software and global free trade 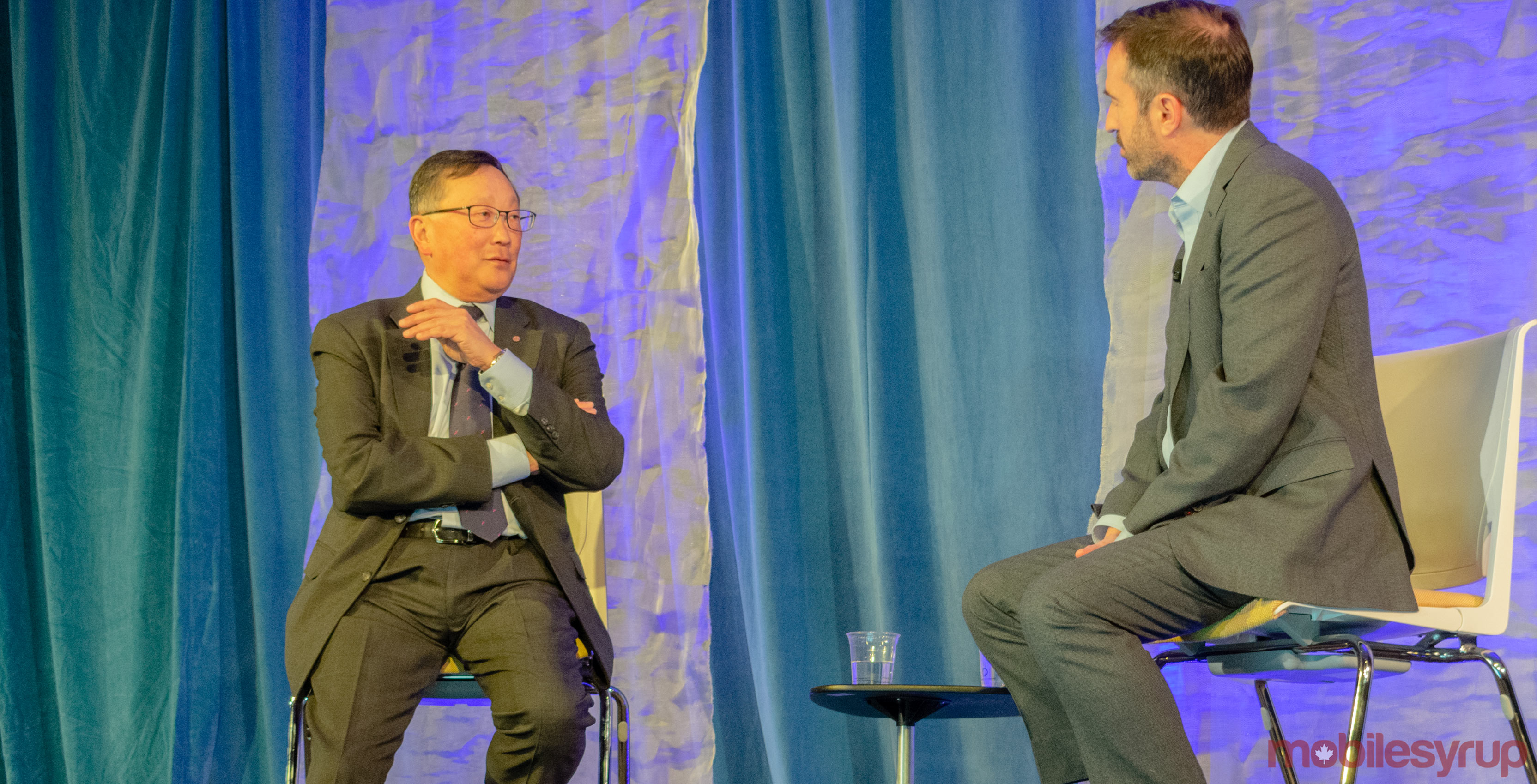 BlackBerry CEO John Chen says he likes to fix things, though he admits he has no talent as a handyman.

While speaking with RBC senior vice president of the office of the CEO John Stackhouse during the bank’s monthly ‘RBCDisruptors’ series, Chen expounded on his talent for fixing things by sharing an anecdote about the current state of the company that was once the world’s leading smartphone hardware and software manufacturer.

“I could give you the song and dance about how great we’ve done and how brilliant my leadership has been,” began Chen.

“I’ll give you one data point.”

According to Chen, when he took over BlackBerry in 2013, the company owed “a couple billion dollars to vendors, and we only had a billion and a half.”

Despite Chen’s optimism — and he’s a notably optimistic person — BlackBerry has undeniably undergone a radical shift in its overall market presence.

After all, the company no longer manufactures smartphones of any kind, instead licensing the BlackBerry name to companies like China’s TCL, India’s Optiemus Infracom and Indonesia’s BB Merah Putih.

Interestingly enough, despite the company’s pivot away from hardware, Chen said that BlackBerry has no plans to change its name.

“A lot of people ask me about that since we’re now focusing on software, services [and] security,” began Chen.

“First of all…I feel that there’s an enormous amount of equity in the brand. It’s one of those brands that I like to make it better first before we even contemplate changing names.”

Chen explained that the BlackBerry name continues to garner respect, despite the company’s very public turmoil in the early 2010s.

“I get a lot of meetings [by] saying we’re BlackBerry,” said Chen.

“Isn’t that more powerful than, let’s say I call myself ‘ABC?’”

Of course, a storied name would be meaningless without worthwhile products, and Chen used his RBCDisruptors appearance to boast about his company’s prowess.

“Anywhere from cryptology to the way we manage identity inside the software stack, as well as AI related to hardware … all those things and the features that we put in to allow operators and enterprise customers to manage what gets looked at, downloaded and contained, we definitely are the number on in the world,” said Chen.

“So that’s the calling card.”

Chen said that BlackBerry software is also used by all major Canadian banks with the single notable exception of RBC.

“I actually don’t even know why I agreed to come,” joked Chen.

In addition to its work with the Canadian and U.S. governments, the company has begun focusing on healthcare, while BlackBerry’s transportation sector push — chiefly due to the company’s QNX in-vehicle software toolkit — include partnerships with Detroit-based automotive giant General Motors and Ford, as well Britain’s Jaguar Land Rover.

“We’re helping them to design the next generation car,” said Chen, adding that BlackBerry primarily profits off of QNX through royalties.

“The future is to monitor the security readiness of vehicles that get put on the road.”

“So our focus is to make sure that communication between different devices or different parties under smart cities could checked for non-intrusive code or sessions.”

As for the company’s security and artificial intelligence efforts, Chen said that BlackBerry is more interested in endpoints rather than just devices.

“We wanted to be able to manage everything large and small and then have them talk to each other in a really secure manner,” said Chen.

When asked about the prospect of competing with AI giants like Google, Chen said that it’s important for companies to focus on what they do best.

“Where we have a lot of competition, they also have different focuses,” explained Chen.

“A lot of them, like Google, focus on user interface, a lot of them focus on managing data and monetizing that data to create trends … so we don’t do any of that stuff.”

Chen also emphasized that BlackBerry doesn’t use or even look at any of the data gathered by its software.

“We don’t use it, we don’t look at it, we actually have an algorithm that discards it after a short time,” said Chen.

“We don’t have any plans to use data from our customers.”

While much of the conversation between Chen and Stackhouse centred on BlackBerry, the discussion eventually shifted towards the growing subject of China as an emerging technological superpower.

Stackhouse asked Chen about the CEO’s opinion on the current trade war between China and the U.S., as well as the immense scrutiny levelled against Huawei due to concerns about Huawei’s relationship with the Chinese government.

Chen described himself as a free trade proponent, stating his belief that “whatever setback [they] have today…it will resolve with a deal.”

“This is all posturing for a deal,” said Chen.

“The question is how good is the deal on either side.”

Chen acknowledged that China is “probably hurting first, because they’re a bigger supplier,” but he added that the “Americans will hurt later.” 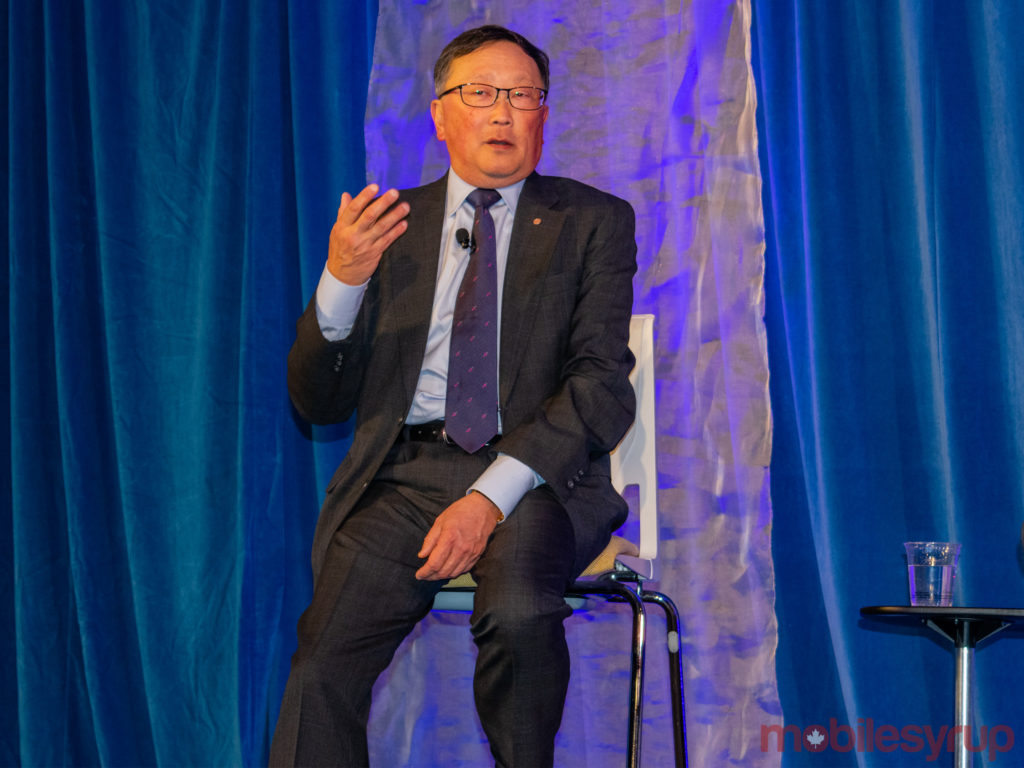 “However, even without that, if you look at the global supply … cell phones, routers, PCs, there are very few goods that these countries make and trade that doesn’t rely on each other’s supply logistics,” said Chen.

“Could we move that? Absolutely. We could move everything, including sourcing materials to Vietnam, Thailand, Cambodia … [but] I don’t think the raw materials distribution around the world will allow to do it in a smooth manner.”

As for Huawei’s 5G efforts, Chen said that the company might be forced to take a page out of Microsoft’s playbook when the Redmond computing giant wanted to push into China.

“The only possibility over time is just like what Microsoft did in China, which is they will have to open up their source for examination and there’ll be a control operator along the way,” said Chen.

“I see no other way for Huawei to get back in the game without doing so.”

Chen was also asked whether Chinese security concerns are as serious as some politicians have suggested, though the CEO admitted that he didn’t know.

“I obviously don’t work with Huawei and I don’t have the visibility of the code…I have no idea,” said Chen.

Chen also addressed the growing risk that cyber attacks pose, but concluded by acknowledging that he’s nonetheless optimistic about the future.

“Medicine, new drugs get developed and approved much faster in cycle with the aid of technology.”