Nomad’s Base Station Hub is a great wireless charger, with a few flaws

The Hub can charge two phones wirelessly, plus two more via USB-C and A cables 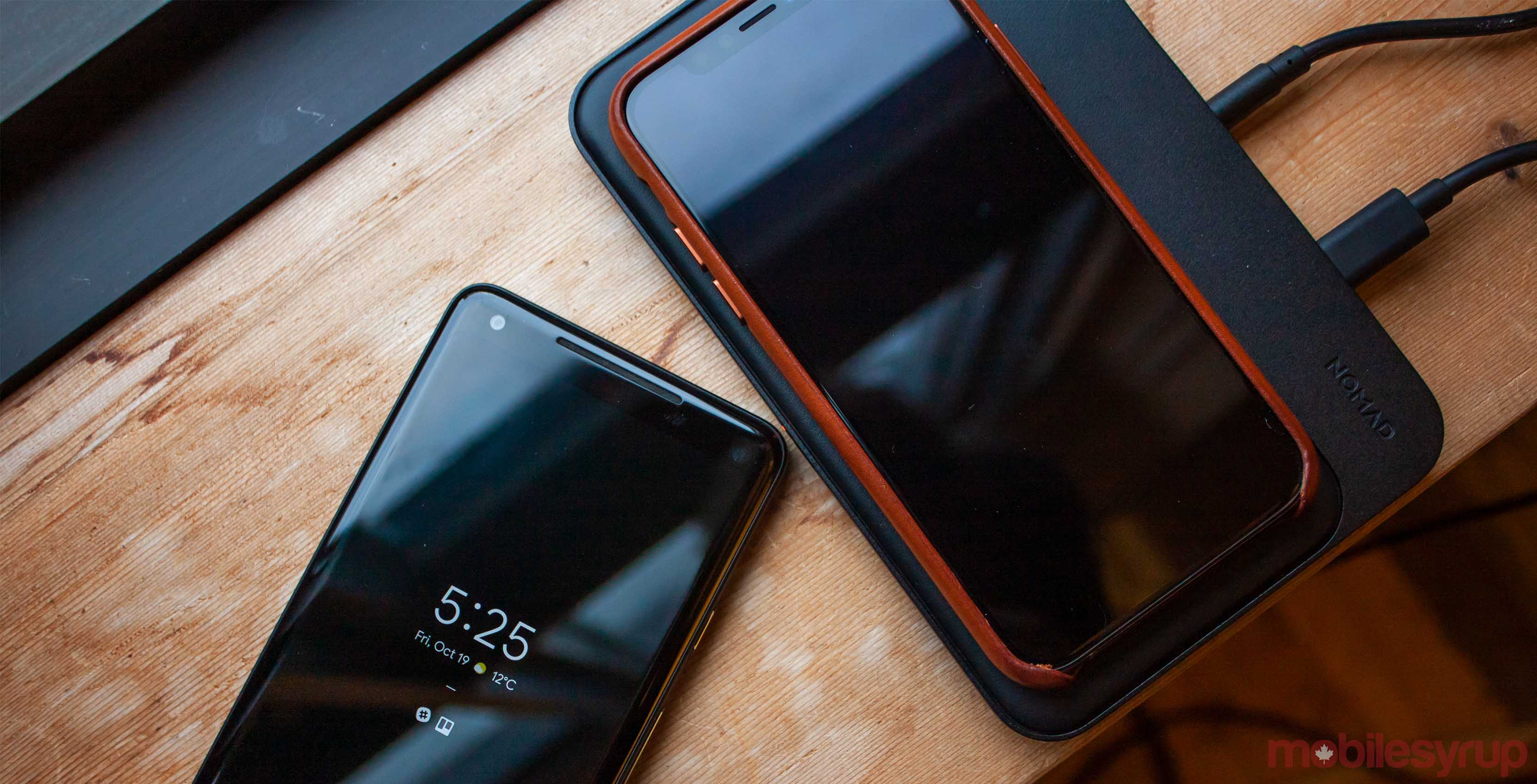 It’s oddly satisfying to plop your phone down on a pad and see it light up as power flows into it.

Wireless charging continues to be a unique addition to many smartphones. But the ultimate wireless charging experience will be a multi-device pad that isn’t picky about where you put your phone.

Several people looked to Apple’s unreleased AirPower charging pad for this. Imagine, placing your iPhone, AirPods and Apple Watch on one wireless charger and having them all charge.

Well, Apple’s AirPower is nowhere to be found. Thankfully, Nomad’s Base Station Hub offers an intriguing alternative that comes close.

Nomad sent MobileSyrup a Base Station Hub, and I’ve used it for a few days now.

The Base Station Hub sports an excellent design

First and foremost, I have to say that it looks great. The black leather pad signifies where to put your phone for charging, and it feels great. Additionally, a matte black coated aluminum frame surrounds the leather pad. The aluminum feels solid despite the plastic feel. Nomad told us the coating was thicker than desired on the first run, giving it the texture.

Underneath, the pad has rubber feet to keep it from sliding. 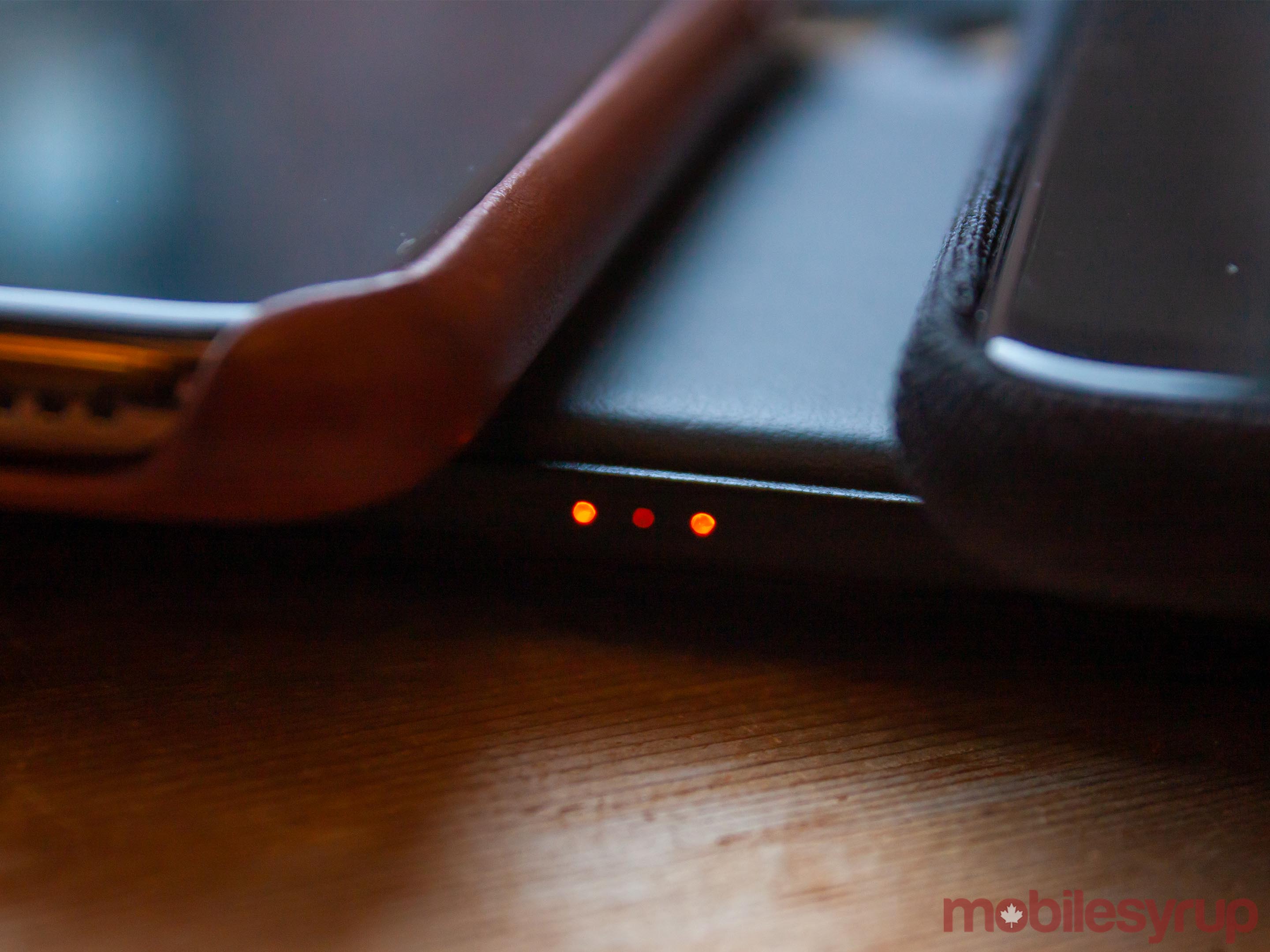 Every aspect of the Base Station Hub seems well thought out. On the front edge of the device are three LED indicators. There’s one for each charging coil, and they light up when their respective coil is in use.

The indicators shine an amber colour while charging and turn white when the device is full. They’re quite bright, making them visible in well-lit rooms. The Base Station features an ambient light sensor on the back as well and will dim the LEDs if its dark.

The rear edge also features three plugs. The first a circular plug for the Base Station’s wall cable. It also has a 7.5W USB-A port for charging devices via a USB cable. Finally, it sports an 18W USB-C Power Delivery (PD) port for charging USB devices.

Nomad says the USB-C PD port can charge a MacBook or MacBook Pro, but it won’t be as quick as the stock Apple charger.

These extra ports quickly made the Base Station Hub a mainstay on my desk. With the number of phones I juggle at any time, the Base Station made it ridiculously easy to keep them charged up, regardless if they charged wirelessly. 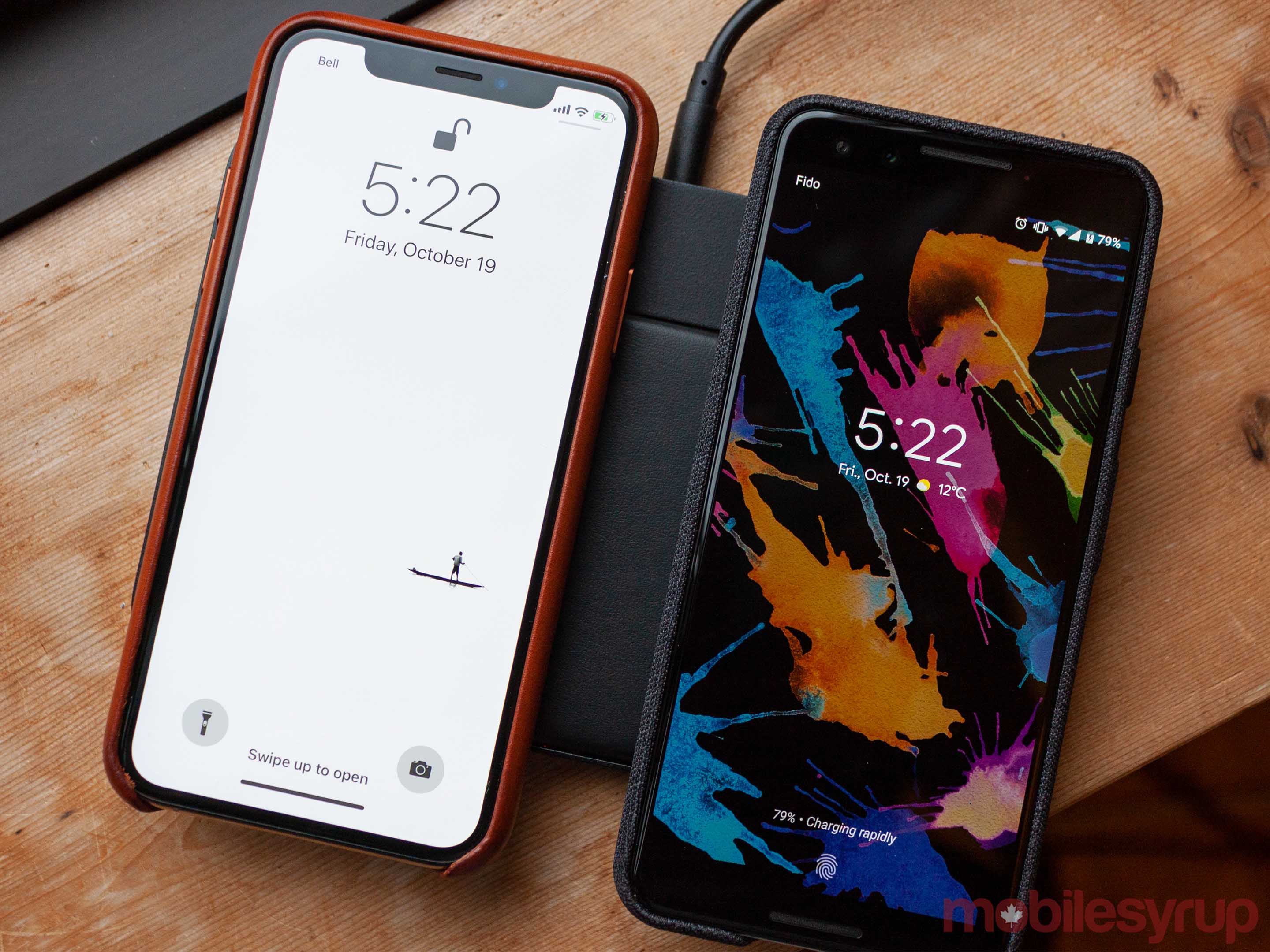 Wireless charging worked as you’d expect on the Base Station Hub.

Charging one phone wirelessly was quite easy. Laying it on the pad was seamless, and I never had an issue picking up a charge. Plus, the leather surface is soft so you won’t have to worry about scratches if you don’t like cases.

Charging two devices wirelessly was more difficult. It took quite a bit of fiddling at times to get both devices in the ‘sweet spot’ where the Base Station would charge them.

Eventually, I got the hang of it. The trick was placing the phones towards the outer edge of the pad. That got more reliable results, but there were still times when the Base Station wouldn’t acknowledge a device placed on it.

An excellent wireless charging pad with a few hiccups

Ultimately, the multi-device charging wasn’t a significant issue for me. At times it could be frustrating to line the phones up just so, but it wasn’t any less annoying than matching a typical wireless charger sweet spot.

Plus, for all the functionality, I think the Base Station Hub is worth it at $99.95.

Sure, you could get a Pixel Stand instead. It retails for $109, but can only charge one device. The Pixel Stand is excellent combined with a Pixel 3 or 3 XL, but if you have any other phone, you’re better off with the Base Station Hub.

If you have multiple devices, the Base Station Hub is even better. While I enjoyed it on my desk in the office, I could also see it make a great addition to a living room table. With the capability to charge up to four devices at once, the Base Station Hub could be a life-saver when entertaining guests who need a quick boost.

You can order one from the Nomad website here.

Update 10/22/2018: Corrected an error that noted the Base Station Hub frame was made of plastic when it’s actually a coated aluminum. Nomad told us the coating was applied thicker than desired on the first run, contributing to the feeling.