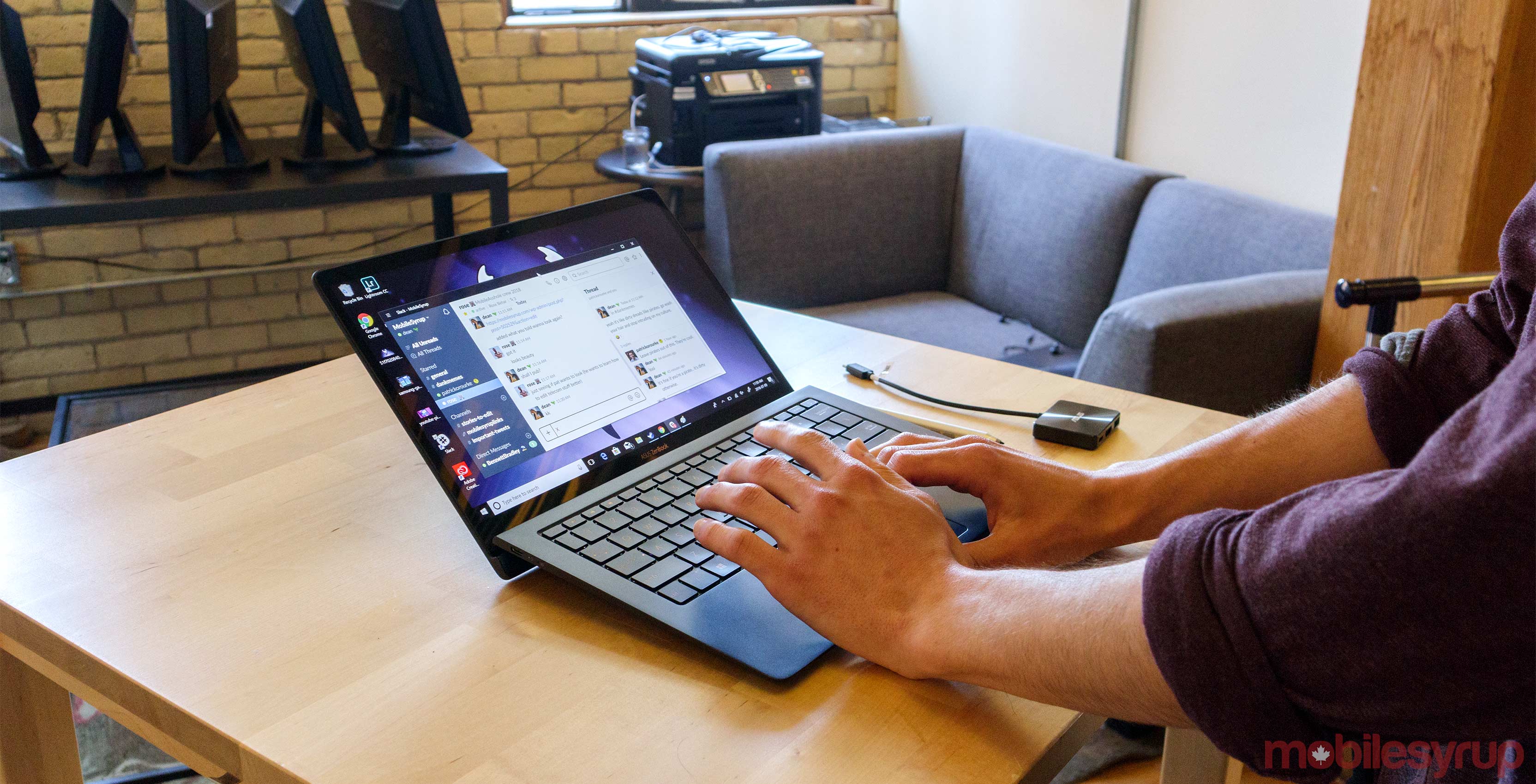 The Asus ZenBook S UX391UA is a thin, lightweight and unusual laptop that features an ‘ErgoLift’ hinged keyboard with the potential to be either alluring or unappealing, depending on your taste.

The model I went hands-on with featured an 8th-generation Intel Core i7-8550 Kaby Lake R processor with 16GB of RAM, 1TB solid-state drive and a 13.3-inch display with 3840 x 2160 pixel resolution. This is the highest-end ZenBook S model Asus sells.

With all of these specs, the ZenBook S couldn’t help but provide a positive experience, though it’s important to note that the experience changes depending on the variant purchased. 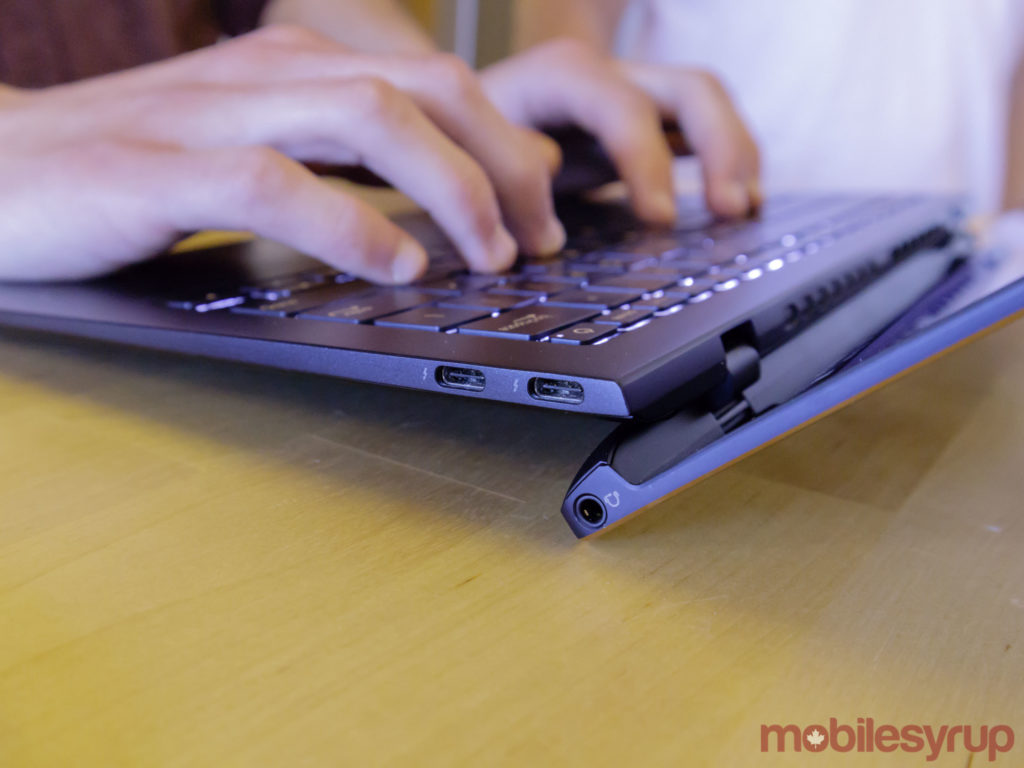 First and foremost, the ErgoLift hinged keyboard looks odd in the sense that this technology is quite unusual for a laptop keyboard, especially on smaller notebooks.

Whereas most laptop keyboards lie flat against a surface, the keyboard on Zenbook S sits diagonally.

Now only one end of the keyboard touches the surface, while the panel with the display is also touching down in order to keep the laptop from being uneven.

Asus claims the design has three advantages: it reduces typing discomfort over extended periods of time, it improves airflow around the underside the chassis and it helps the downward speakers produce a clearer sound.

Using the ErgoLift keyboard was strange at first, but in short time (about 24 hours) I got used to the design. After three weeks of usage, I didn’t feel like there was much of a change when it came to typing. What’s more, I did find that the elevated keyboard felt easier on my hands, especially in comparison to laptops like the Surface Book.

As for airflow, depending on the task, the ZenBook S often got very hot, and while the hinge prevented the heat from reaching my lap, ventilation could be a lot better.

As a whole, typing was fine. The keyboard features 1.2mm key travel, which is inferior to the average of 1.5mm to 2.0mm. However, the keyboard was fine for my eight-hour per day, five days per week usage.

It’s also worth noting that the power button is beside the delete key, so I accidentally put the laptop to sleep multiple times. 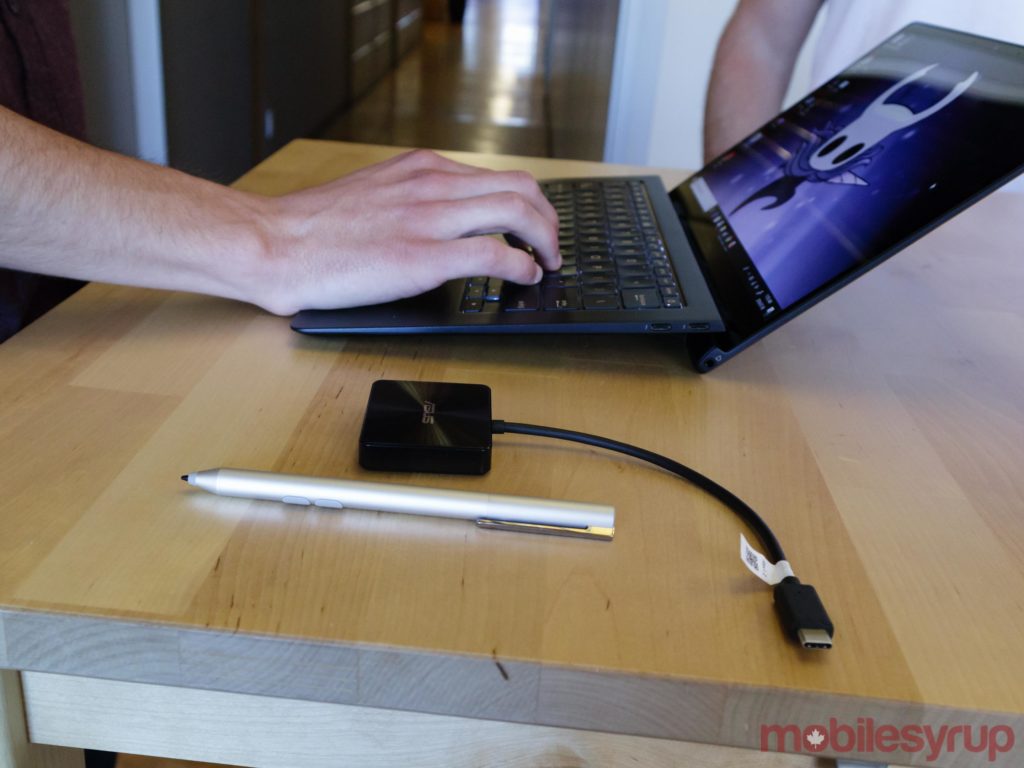 Asus says the ZenBook S is ultra thin and ultra light, but let’s put that in perspective against some competitors.

In weight or size, the Asus ZenBook S doesn’t win either category.

That being said, the ZenBook S feels quite light. I often had to check my bag to make sure it was in there, because I was never sure. It also felt comfortable to use on my lap, which isn’t something I’ve been able to say about many laptops. 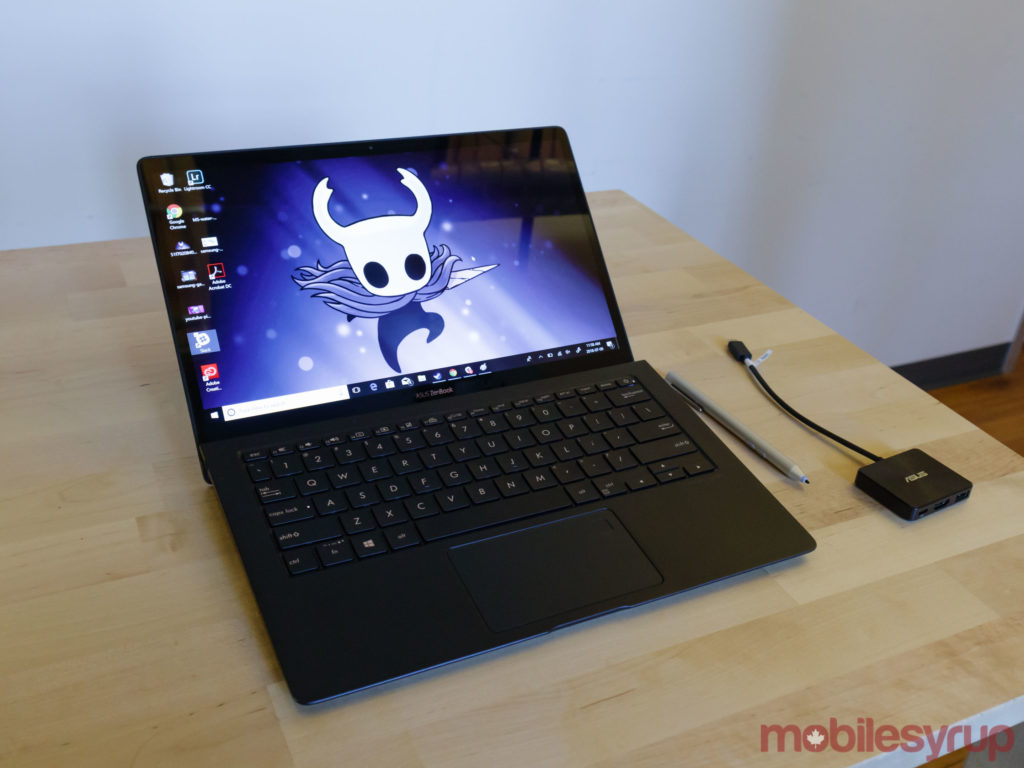 As for the 4K display, videos were looked detailed, and the panel showed a crisp, vivid and vibrant image. I never felt like I was missing any details on the screen.

I spent some time watching 4K samples on YouTube, and from the scarlet macaw to the Indian peacock all of the animals had their colours represented perfectly.

While the display lacks HDR, the 100 percent sRBG color gamut did a good job representing each of the animals, as well as their fur, feathers and scales. 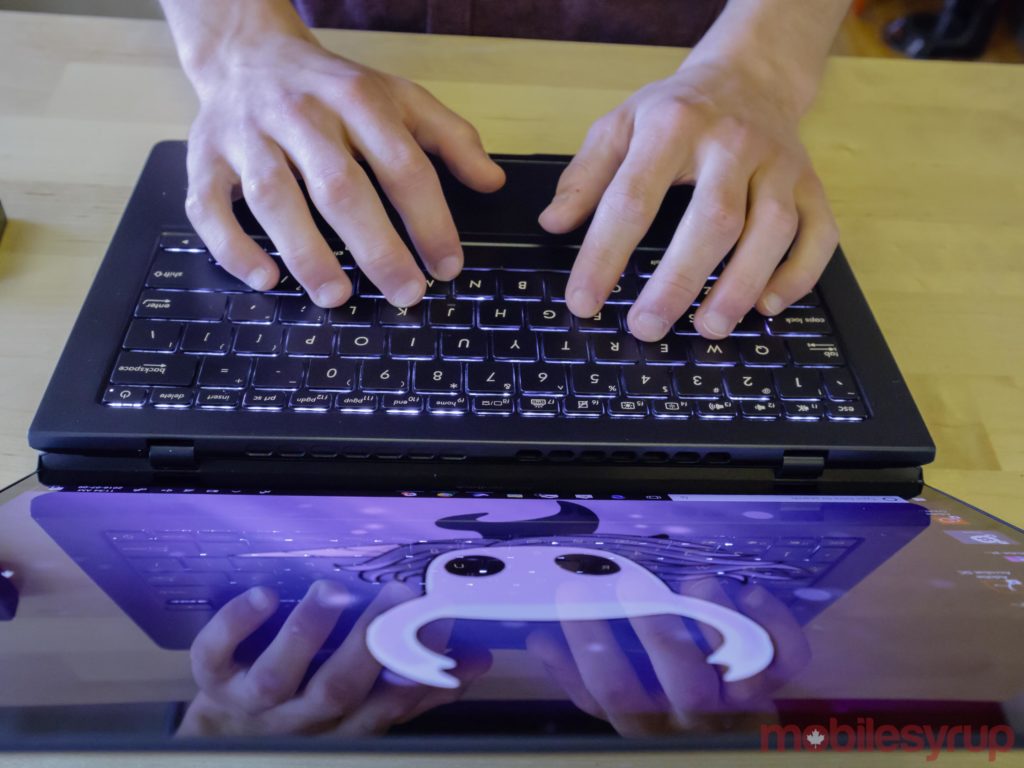 My day-to-day experience with the ZenBook S included listening to music, writing articles on Chrome, light editing in Photoshop, and occasionally loading RAW images into Lightroom, as well as watching a video or two on YouTube.

While searching the web, watching videos on YouTube, listening to music and writing articles the notebook ran smoothly without any issue. However, editing in Photoshop caused the laptop to heat up significantly, sometimes resulting in random freezing. I encountered similar issues when uploading photos to Lightroom. It’s not like this experience happened every time I used either application, but it occured enough for it to be noticeable and cause sporadic restarts.

While playing video games I was met with a different experience. After 30 minutes of Paladins Realms Royale, I noticed the laptop commonly stayed at 30fps. Meanwhile, Paladins deathmatch mode, which plays more like Overwatch, averaged around 50fps. 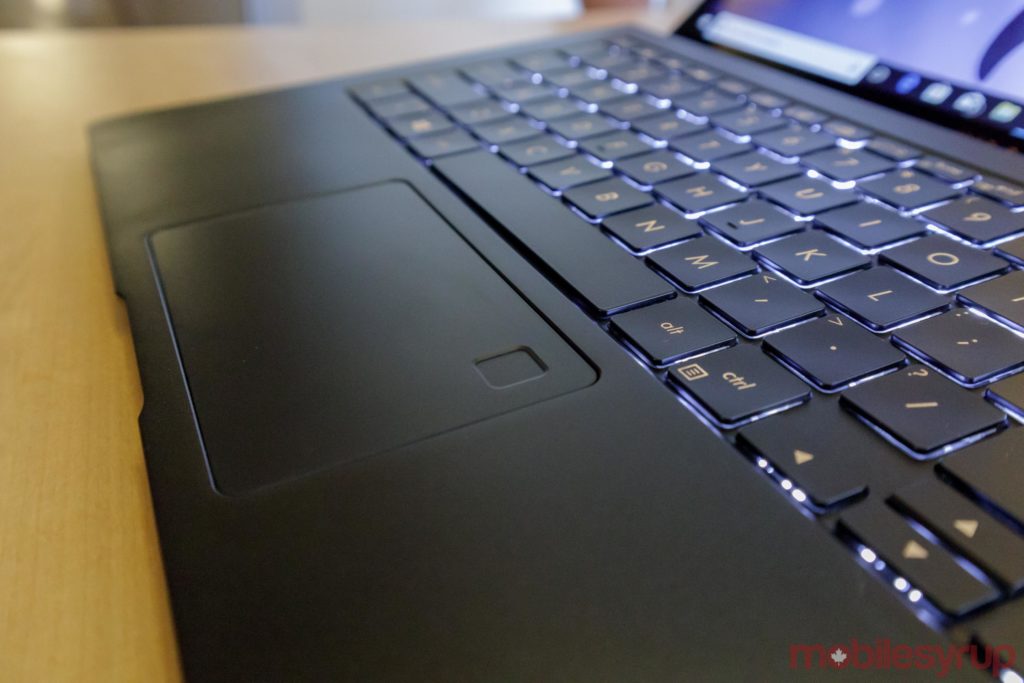 The battery experience on the ZenBook S wasn’t the best. I found the 50Wh 4-cell Lithium polymer battery kept the laptop charged for about five to six hours. That was with moderate usage involving listening to music and editing photos in Photoshop.

Keep in mind, though, that I had the highest specced ZenBook S. A model with less powerful internals would have likely experienced better battery life.

The ZenBook S also includes Windows Hello, which uses a fingerprint scanner to unlock the laptop, Cortana and even Amazon’s Alexa assistant. Having Alexa on the laptop allows users to control their home ecosystem simply by talking to their laptop. Otherwise, you can use Alexa similarly to Cortana to ask the voice-activated assistant questions and play games.

As for the ports, the ZenBook S features one 3.1 USB-C port and two USB-C ports that double as Thunderbolt 3s connectors. Asus also includes an extra dongle with the laptop that features a USB-A port and an HDMI port. And while the dongle supports these connections, it’s annoying to have to carry around the dongle wherever you go. I like to at least have a standard USB-A port, as it’s common for some smartphones to come with a USB-C to USB-A cable.

Overall, I liked the ZenBook S. It was lightweight and easy to carry on my walk to work, and didn’t take too much in room in my bag. I thought the laptop was quick and able to handle many of my tasks. It was unfortunate that it would heat up and slow down while using Photoshop. Don’t get me wrong though, the laptop can handle Photoshop and Lightroom, it’s just that there are other laptops that can handle it better.

The ZenBook S is perfect for the working person who travels a lot and is always on the move, unless they’re also a gamer or someone who edits pictures.