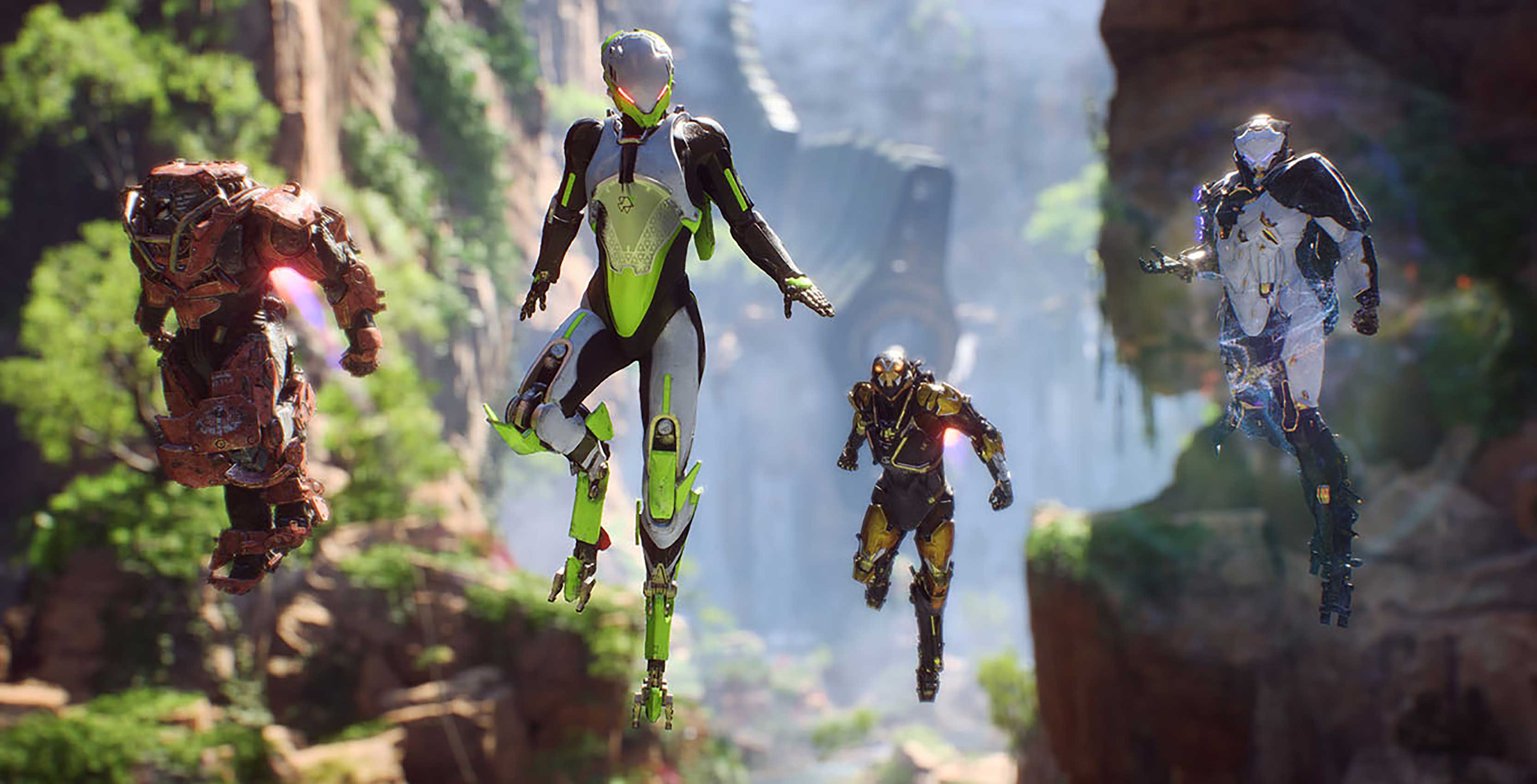 Altogether, there were dozens upon dozens of games featured in some capacity (whether through gameplay reveals, teaser trailers or even just name drops from developers), including Marvel’s Spider-Man, The Last of Us: Part II, Kingdom Hearts III, Halo: Infinite and Super Smash Bros. Infinite.

However, with such a steady barrage of games shown off at E3, it can be difficult to keep track of which games are from which developers. What’s more, some of the biggest games at the show are actually made  in Canada, although you likely wouldn’t know that when many were revealed in a fast-moving press conference.

With that in mind, I’ve put together the following comprehensive list of all the games made in Canada that were at E3 in some capacity, as well as what you can expect from each of them:

Synopsis: Odyssey brings the popular action-adventure franchise to 431 BC Ancient Greece when the Peloponnesian War waged between Athens and Sparta. The game will allow players to choose between a male (Alexios) or female (Kassandra) protagonist and features the Assassin’s Creed series’ first-ever dialogue choice system.

Synopsis: Anthem is Bioware Edmonton’s first game since 2012’s Mass Effect 3. In a marked departure from the single-player choice-driven RPGs the studio is renowned for, Anthem features a shared world online multiplayer action-RPG experience gameplay similar to Bungie’s Destiny. Players will be able to use high-powered Iron Man-esque exosuits based on four different character classes to explore a massive alien world.

Platforms: Xbox One, PC (timed exclusivity, then it may release on other systems)

Synopsis: Originally announced in 2013, Toronto indie studio Capybara Games is finally set to release Below sometime in 2018. In Below, players will explore a dark and atmospheric island and face off against challenging enemies. The game will feature a permadeath (or ‘permanent death’) mode, meaning players will need to be particularly careful when fighting to survive.

Synopsis: While development on the latest Call of Duty: Black Ops title is led once again by Treyarch, Quebec City’s Beenox is helping out with the PC version of the game. Black Ops IIII will be the first game in the Call of Duty series to not feature a traditional single-player campaign, instead focusing on a larger suite of multiplayer content, including the military shooter franchise’s take on the ever-popular ‘battle royale’ game genre.

Synopsis: While not a new game, The Delicious Last Course will mark the first new content for Cuphead since its release in September 2017. Oakville, Ontario-based Studio MDHR will be introducing a new world, bosses, weapons and stat-boosting charms to its meticulously hand-drawn 1930s animation-inspired game. A new playable character, Ms. Chalice, will also join leads Cuphead and Mugman.

Synopsis: Since releasing on February 14th, 2017, Ubisoft Montreal’s historical fighting game has seen a steady stream of new content updates. At E3, Ubisoft announced the biggest For Honor expansion yet, Marching Fire, which will add four fighters from the Wu Lin Chinese faction. The expansion also includes a new 4v4 mode called Breach which focuses on a castle siege.

Synopsis: Vancouver-based The Coalition’s Gears 5 continues the acclaimed visceral third-person shooter series by focusing on lead playable character Kait, JD Fenix’s friend from the fourth game. Kait will journey across the planet Sera to uncover the origins of the Locust and save humanity. JD and his father, longtime series hero Marcus, are also returning. It’s worth noting that while the game is still part of the Gears of War series, Microsoft’s official title for this latest entry is simply ‘Gears 5.’

Release date: The Golf Club 2019 is the fourth game in the acclaimed golfing sim series from Lunenberg, Nova Scotia-based HB Studios. The game features the PGA Tour and a more robust course creation tool with over 400 props to choose from. Characters and clubs can also be customized and taken into single- and multiplayer modes.

Synopsis: Montreal-based Rogue Factor’s Necromunda: Underhive Wars is the first video game adaptation of the popular Games Workshop tabletop game. In Underhive Wars, players will engage in turn-based tactical combat against rival gangs where injuries and death are permanent. At the same time, they’ll be able to level up and customize unique fighters based on loadout and appearance.

Synopsis: While Rainbow Six Siege came out over two years ago, Ubisoft dedicated some time in its E3 conference to reveal that the game has now amassed over 35 million players. To celebrate, Ubisoft announced that Another Mindset, a documentary about the game’s ever-active community, will premiere at the Six Major eSports event in Paris on August 17th.

Synopsis: Montreal’s Nvizzio Creations is bringing the mobile version of RollerCoaster Tycoon to the Nintendo Switch. The game features a Campaign mode where players must build an entire theme park from scratch, Scenarios mode where they must fix pre-existing parks and Sandbox mode, allowing them to freely build any kind of park.

Synopsis: Perhaps one of the biggest surprises from Microsoft’s presser was the reveal of a new skateboarding game — one from a relatively unknown Montreal developer, no less. Creā-ture Studios says the game will use a dual-analogue stick control system similar to EA’s Skate franchise and allow players to record, edit and share videos of their coolest skateboard tricks online.

Shadow of the Tomb Raider

Synopsis: Eidos Montreal takes over lead development on Lara Croft’s latest adventure from California-based Crystal Dynamics. Shadow of the Tomb Raider focuses on a darker and more self-destructive Lara as she sets off on a globe-trotting quest to stop a Mayan apocalypse. The action-adventure game also features revamped stealth mechanics and the series’ largest areas to explore.

Synopsis: Since 2013’s Splinter Cell: Blacklist, Ubisoft Toronto has mainly been a support studio on games like Far Cry 5, making its second game, Starlink: Battle for Atlas, particularly notable. In Starlink, players will pilot high-tech ships and explore a vast star system to recruit alien allies. Singleplayer and multiplayer modes will be available, as well as optional toys-to-life functionality. The game will also feature exclusive Star Fox content on the Nintendo Switch.

Developer: SpectreVision (The Boy, Mandy), in conjunction with Ubisoft Montreal

Synopsis: One of the more interesting moments of Ubisoft’s conference was when Lord of the Rings star Elijah Wood took to the stage to show off a horror game. Transference, which is being developed by Wood’s SpectreVision production company and Ubisoft Montreal’s Funhouse division, is a psychological thriller in which members of a family take part in a corrupted, creepy simulation. They’ll need to explore a digital home to collect data that they can use to recreate their lives.

Synopsis: Despite being announced as The Secret Legend a few years prior and being renamed at last year’s E3 PC Gaming Show, Tunic showing up at Xbox’s E3 briefing was one of the most talked-about surprises of the show. The Zelda-inspired isometric action-adventure game features a cutesy fox exploring a fantasy world brimming with secrets and challenges. Incredibly, the game is developed almost entirely by one man, Andrew Shouldice of Halifax.

Synopsis: Montreal-based Compulsion Games’ We Happy Few has landed on many gamers’ radars for its Bioshock-esque action gameplay set in a dystopian world. Society has collapsed due to overuse of a hallucinogenic drug that has led citizens to become deranged, forcing players to fight to survive. Also of note: Microsoft confirmed during its E3 showcase this year that it has acquired Compulsion Games, although the game is still set to release on all platforms.

Did we miss any Canadian-made games? Which ones are you most excited to play?