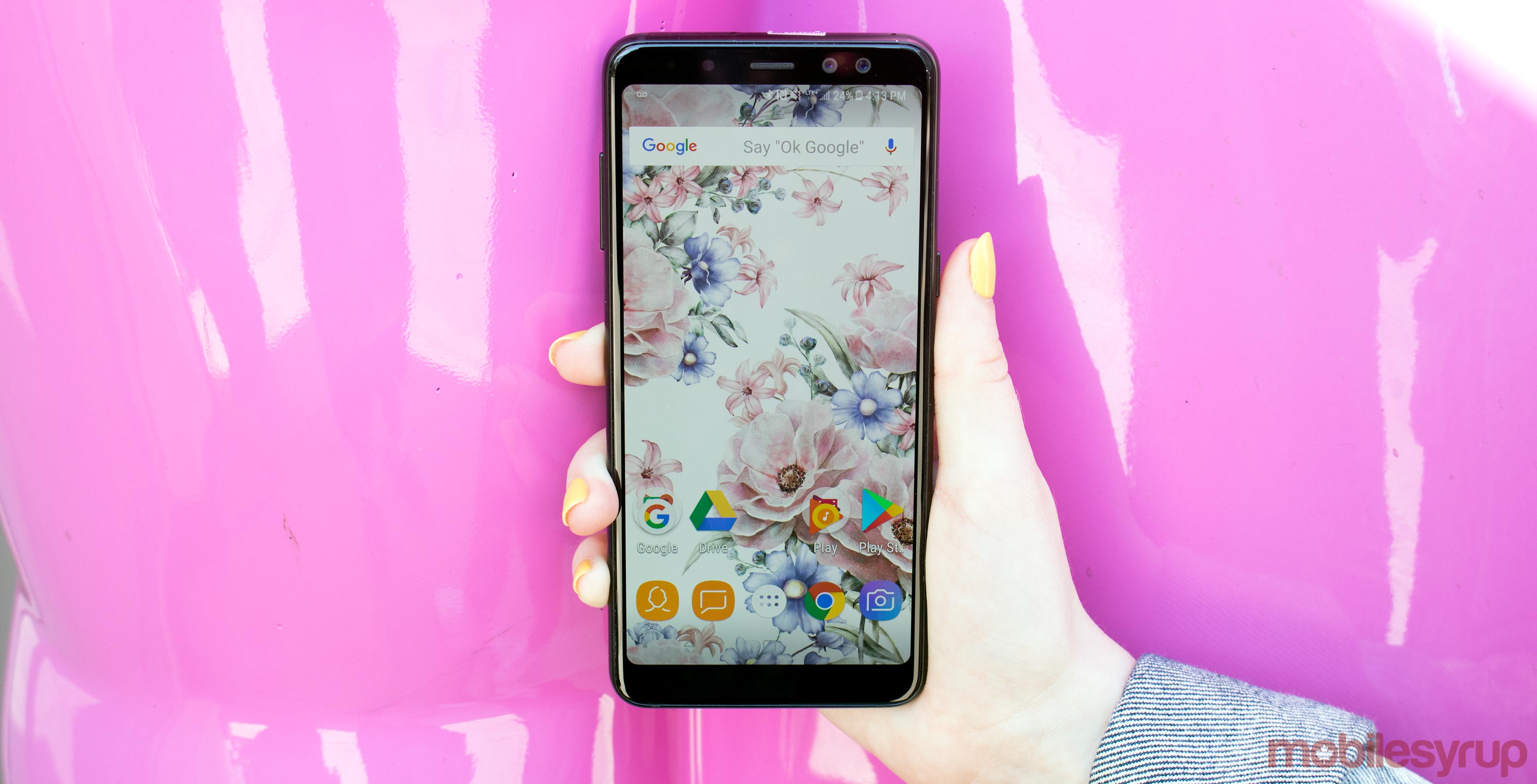 For Samsung fans with small budgets, the company’s A-series has long offered the best of its high-end S-series: inexpensive but well-designed.

While the new Galaxy A8 offers a ‘well-designed’ smartphone, it might be getting on the more expensive side, especially considering the low price of other options.

Either way, I was quite impress with Samsung’s latest midrange offering, due to its display and its stellar selfie shooter. 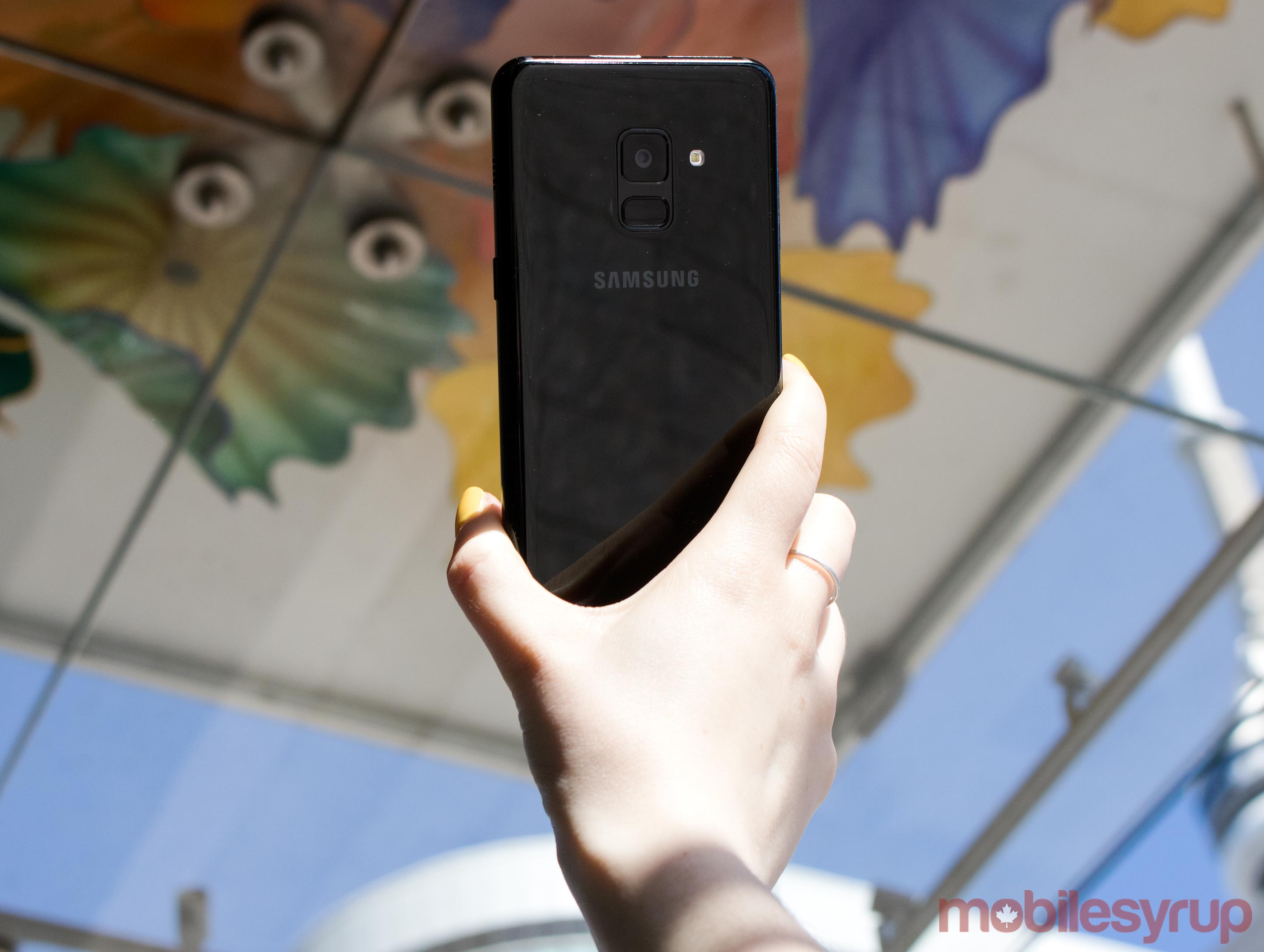 The Samsung Galaxy A8 is a rather compact smartphone with a slim 18.5:9 display aspect ratio.

The phone features a rounded display and feels comfortable in the hand. However, weighing in at 172g, it’s far from being the lightest smartphone on the market — the Galaxy S9, for example, is 10g lighter.

The Galaxy A8 foregoes Samsung’s now familiar ‘Infinity Display’ — featured in the Galaxy S8 and S9 — making the smartphone flatter than the premium devices. Combined with the rounded corners and somewhat larger bezels, the phone features a look that combines design cues from the Galaxy S9 and Pixel 2 XL, which I found appealing. 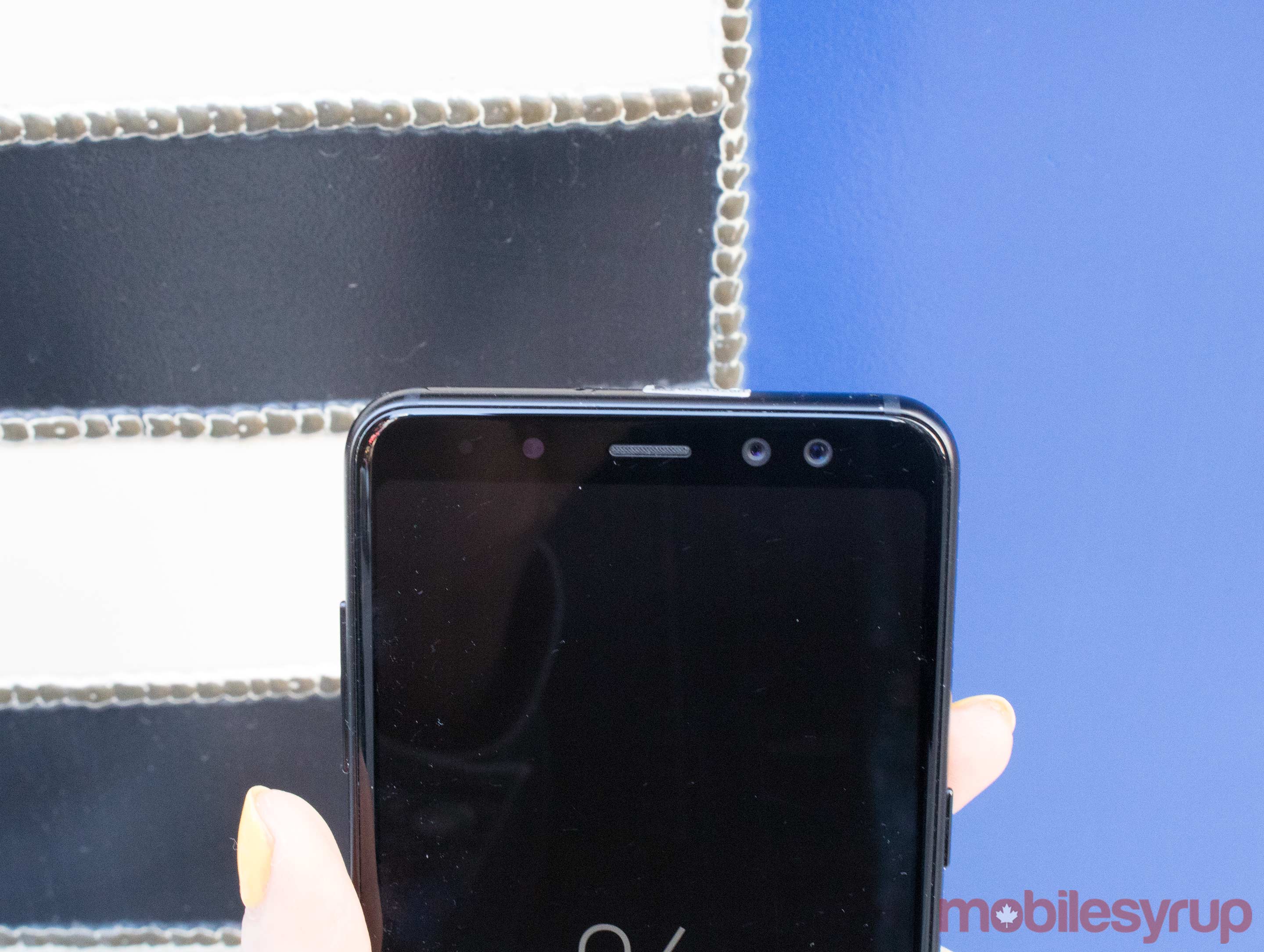 The lack of Infinity Display means the phone is also easier to hold and, making it easier to avoid accidental edge touches, which often occur with the Galaxy S9 and the S8 due to their curved displays.

The side of the A8 also lacks a dedicated Bixby button, something that I actually liked using on the S8 and S9.

The speaker is on the side of the handset beside the power button. Because of its placement I found that I occasionally muffled the phone’s sound when holding the device in landscape mode. 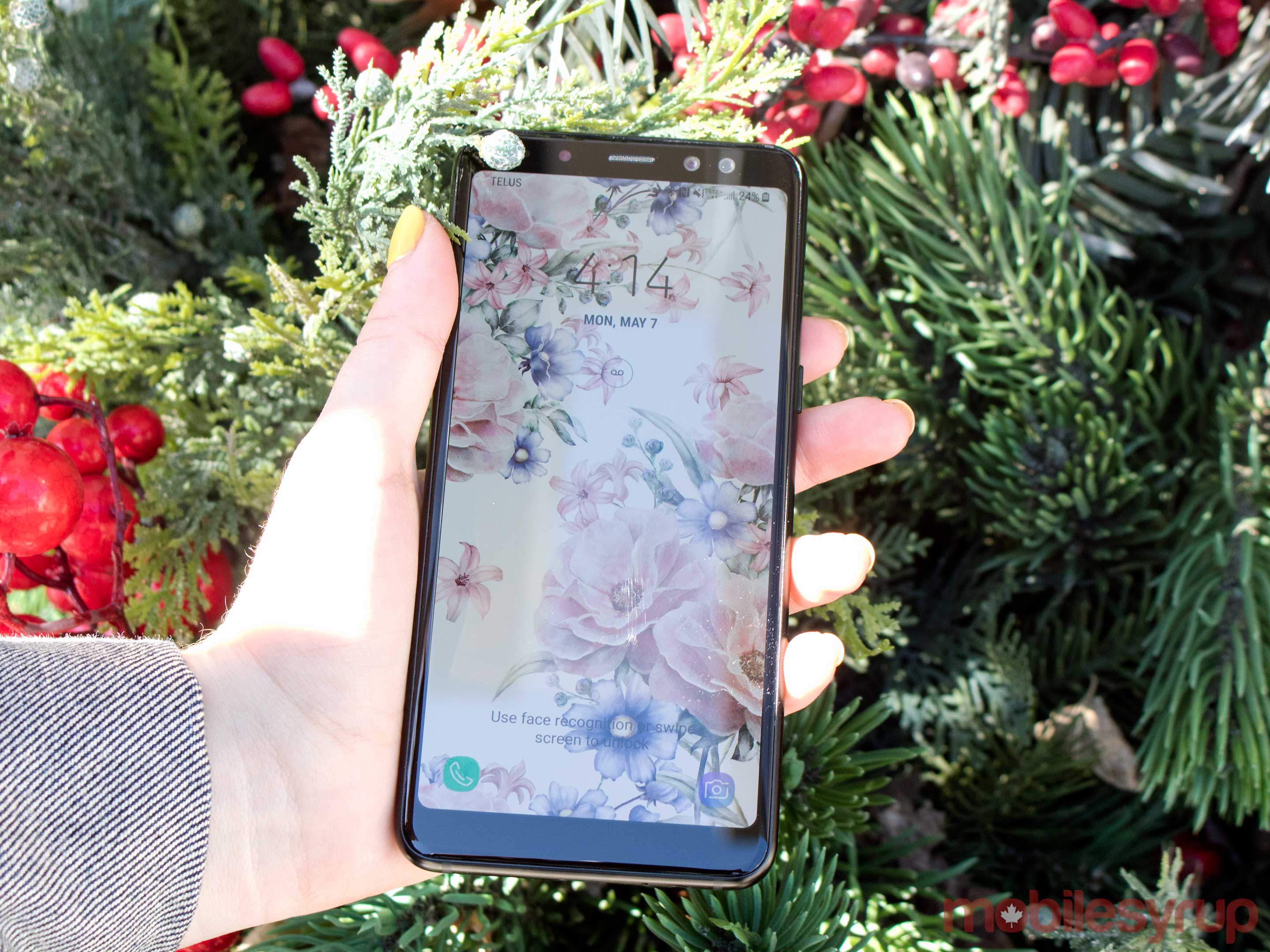 The screen reminds me of the OnePlus 5T, which means it’s not necessarily the best display, but it offers lush colours and deep blacks in addition to showcasing high resolution images well. Also, no matter which angle you look at it, there’s no discolouration — I’m looking at you Pixel 2 XL.

That said, the display is definitely not as vibrant as the Galaxy S8 or the S9.

However, that’s not a bad thing. Considering the Galaxy S8’s and the S9’s display is naturally too cold for my liking and adjustment is necessary.

Videos look great on the small display. I spent most of the past two weeks watching Netflix on the Galaxy A8 and I never felt like I was missing any details, though in bright sunlight I felt like I needed to switch to one of the other flagship smartphones I had around.

In normal sunlight, the A8 is still quite usable though. 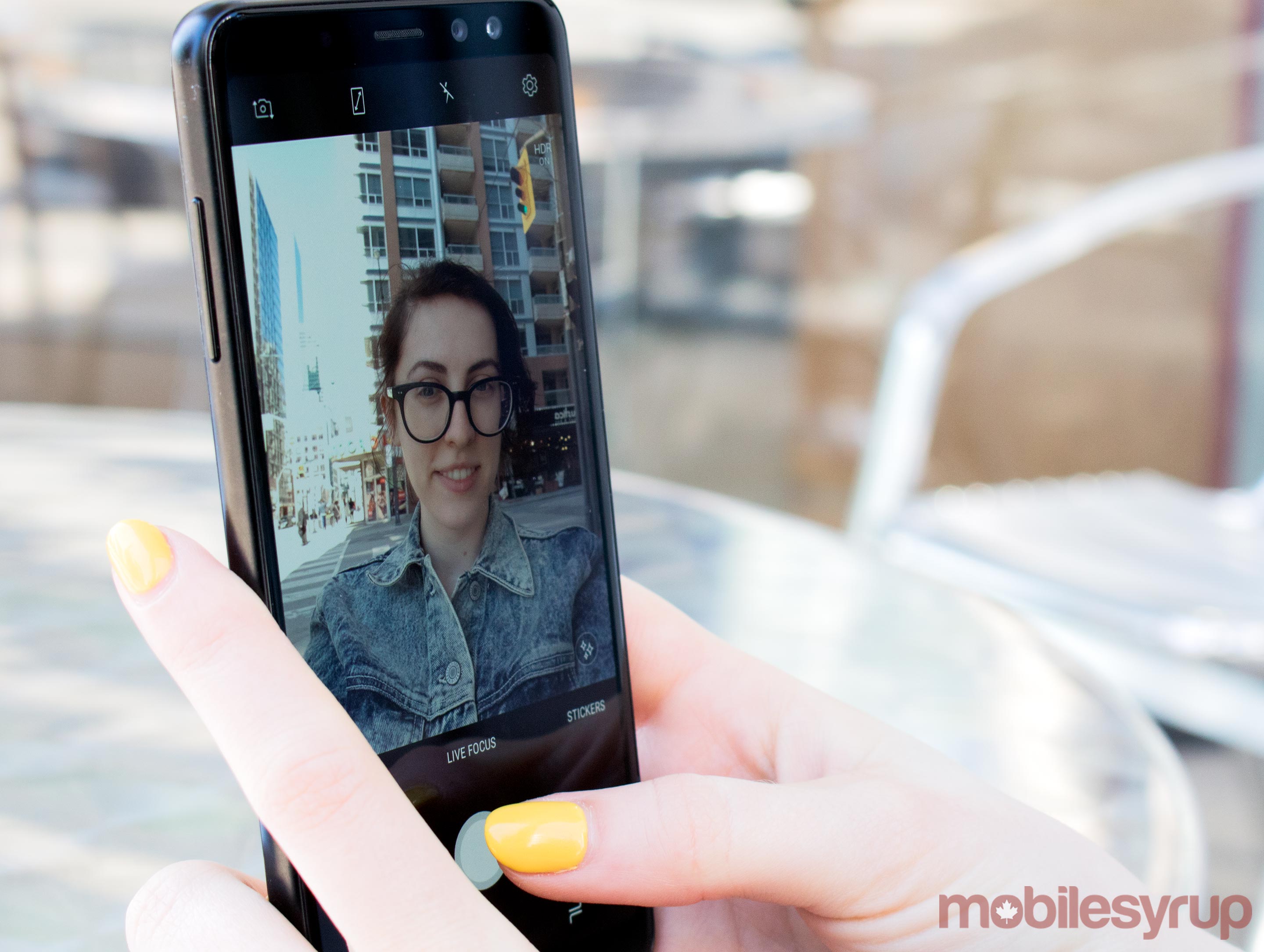 The Galaxy A8’s selfie shooter is where the phone shines.

The dual-camera setup — 16 and 8-megapixels — take stellar images with clear and crisp shots. Pictures are detailed and allow users to adjust the smoothness, or even the slimness of their face. Further, you can change how much background depth-of-field there is. You can even change the setting to take wide angle pictures to include more of yours friends in a snap.

Even though the phone’s rear facing camera sports a 16-megapixel sensor it’s not comparable to Galaxy S8’s or S9’s camera. The main camera doesn’t seem to have any sort of bokeh effect or ‘portrait mode.’ Still, the pictures are clear, detailed and life-like. While the Galaxy S8 takes vibrant pictures to the point of surrealism, the A8 provides a clarity that’s almost Pixel-esque — of course not at the same level.

Outside the camera can easily overexpose highlights, buts it’s not very noticeable. Further the phone, on occasion, can over-sharpen. This was especially noticeable when greenery was present in the image. At night the phone definitely overexposes light in an attempt to improve quality. However, night images are definitely low quality and considerably blurry.

The phone also has Bixby Vision which can identify items, foreign texts and even places. However, for me it didn’t work all that well, especially the shopping feature. 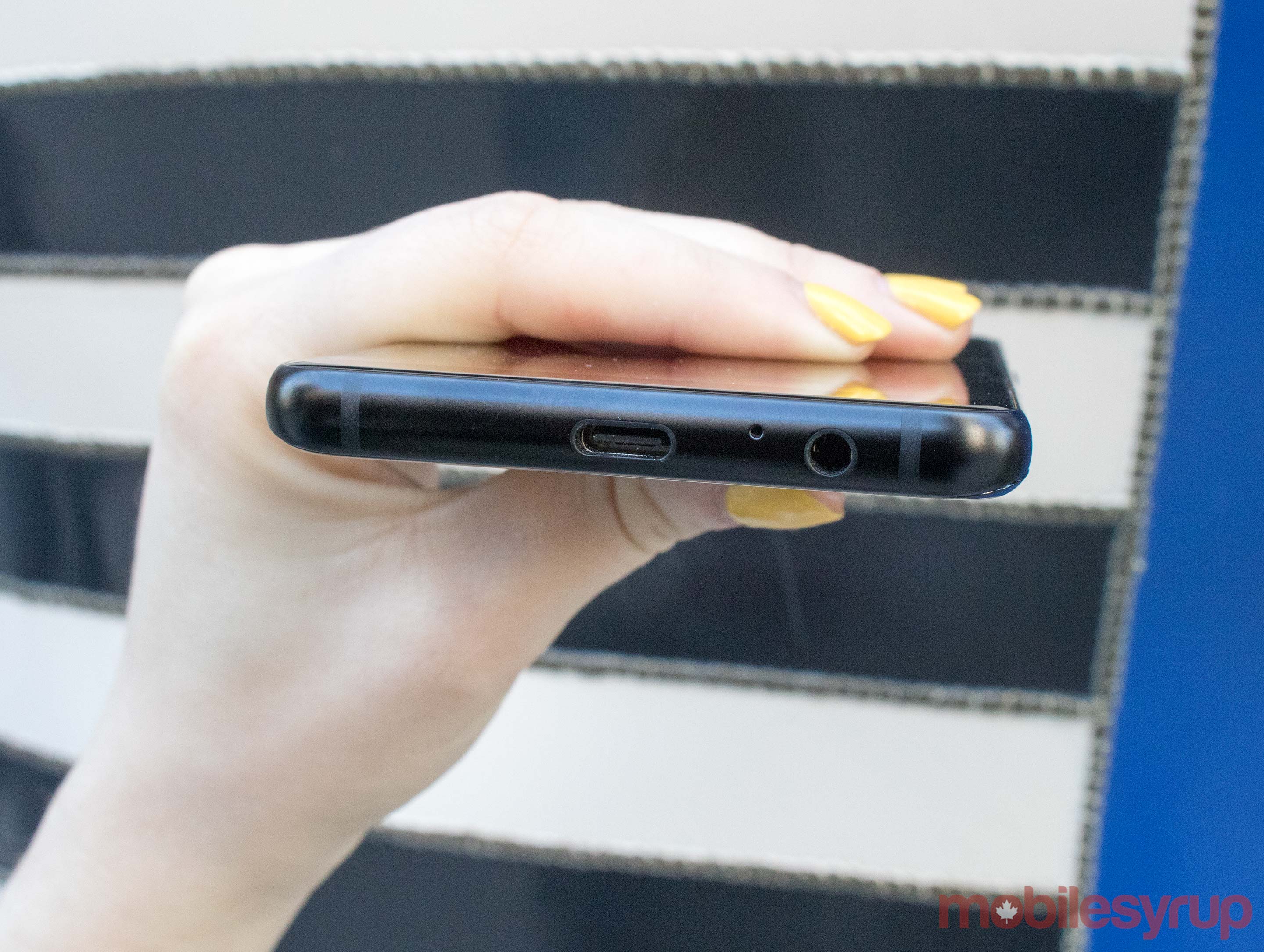 The Galaxy A8 is powered by a 3,000mAh battery. The phone can last a whole day of usage — from 7am to 10pm — with around an hour of Netflix and four hours of screen on time, in my tests. In fact, in my experience the A8 still has around five to ten percent battery life at the end of the night.

On one occasion the phone only lasted seven hours, but that included a little more than two hours of Netflix and using the phone as a Wi-Fi hotspot.

In a galaxy far, far away from stock 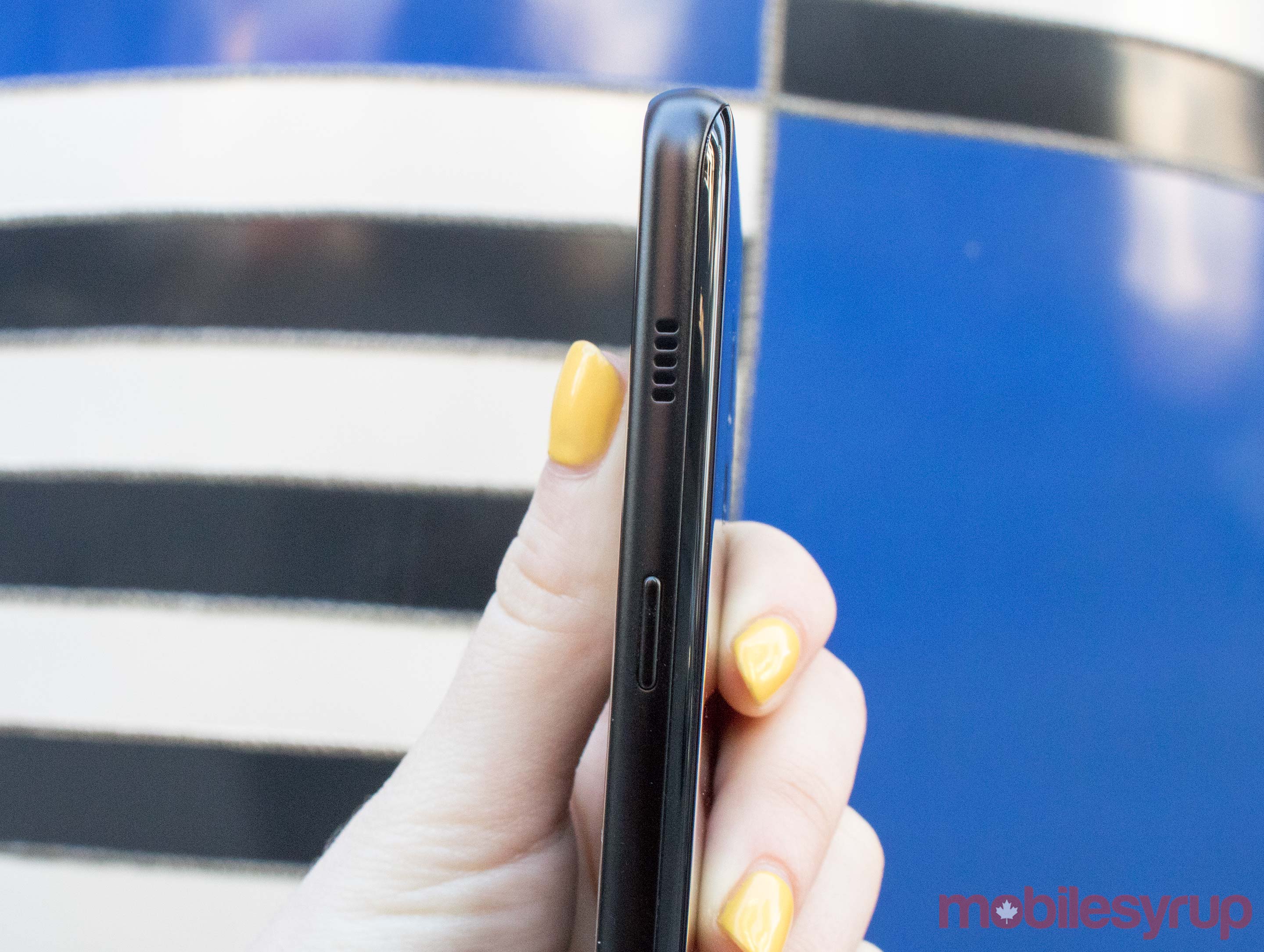 The Galaxy A8’s Samsung Experience is similar to the Galaxy S8 and the S9, which means it’s far from stock Android — Android 7.1.1 Nougat to be exact. Like many other skinned device the phone includes many app copies, like Samsung’s calendar, messenger and clock apps. the phone even includes its own Galaxy app store.

The phone lacks Bixby Voice which I thought was quite unfortunate. While the phone still features Google Assistant, I actually enjoyed Bixby Voice on the Galaxy S8 and the S9. However, many people might be in favour of the lack of the Bixby AI.

We're five months into the year and there have been surprisingly few midrange devices released as of yet. As it stands, when compared to other mid-range devices like Sony's Xperia XA2 Ultra and the Asus ZenFone M1 Plus, Samsung's A8 is the clear winner. However, the phone's price tag is also a little high when compared to the competition.

The Samsung Galaxy A8 is $649 via Samsung or $0 down for a two-year contract at many carriers. The phone is worth that amount of money, however, it comes close enough in price range to its older premium siblings that you may want to consider the Galaxy S8, which is $819 or even the S9 for $959 on Samsung's website. The software experience on the S8 will be preferable in comparison the A8, and overall will be better on the S9.

That said, the Galaxy A8 I definitely enjoyed my time with the smartphone. If your budget only allows for a $0 midrange phone on a contract and you want a reliable selfie shooter, then I'd definitely recommend the A8. Especially if you're not a fan of the S8, like I was.

If your budget only allows for a $0 midrange phone on a contract and you want a reliable selfie shooter, then I'd definitely recommend the A8.