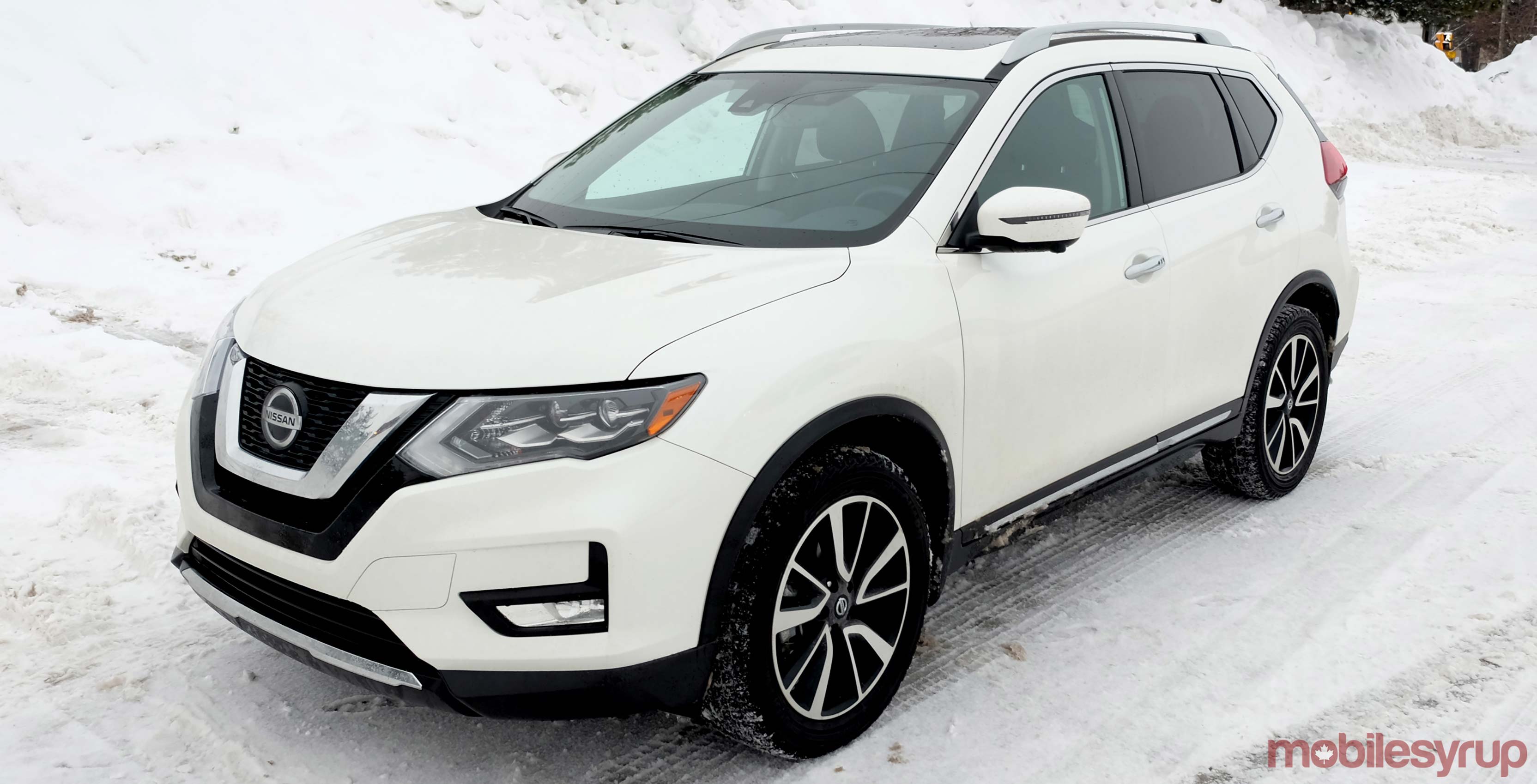 Nissan has been known to be conservative in some respects, and more progressive in others. Infotainment is slowly inching from the former to the latter, but there’s still plenty of room to move faster.

I recognize I come off a bit like a broken record writing that. It seems like almost every automaker is in the same boat. But progress is progress, and compared to what Nissan was offering drivers a few years ago, there is more value now.

I tested the latest version of NissanConnect in the 2018 Rogue, and managed to do so with two different trims: Midnight Edition and SL. The key difference between the two is that the SL trim has safety and telematics features through NissanConnect Services, meaning the iOS and Android app can integrate with the vehicle.

Not surprisingly, there is no backward-compatibility, so what’s in here is the best Nissan has to offer, partly because Apple CarPlay and Android Auto are in the mix. While better than before, more effective parts could ultimately make for a better sum. 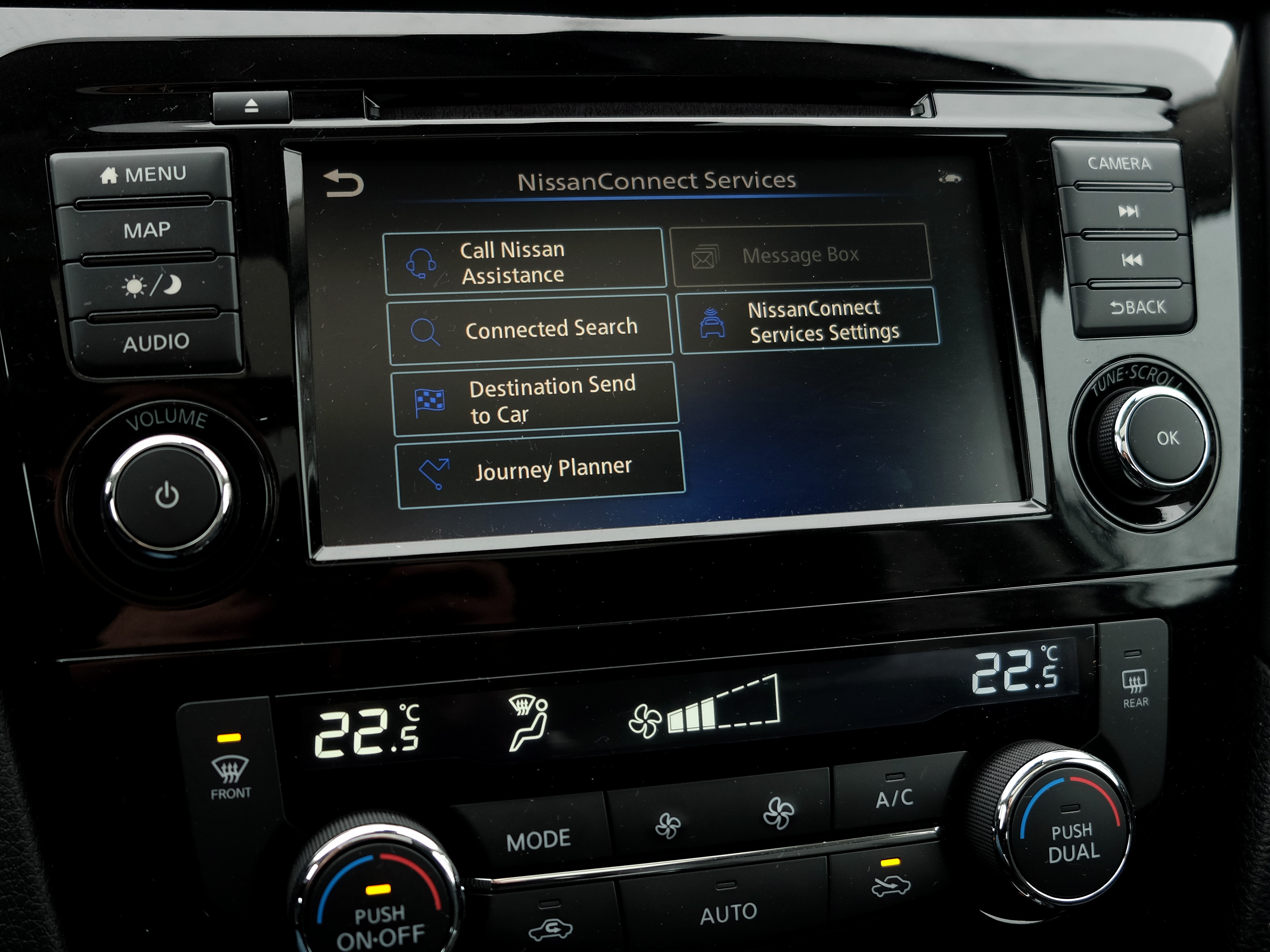 At first glance, NissanConnect appears to have gone through a bit of a makeover. Previously laden with text-heavy menus, the system was not only terribly ordinary, it lacked a personality.

The text has been supplanted by more aesthetically pleasing icons, but only on the main menu screen. The rest of it is still text-heavy, and only a moderate upgrade in font and style. Nissan maintained the physical buttons flanking the 7-inch touch display, even simplifying them to avoid redundancies.

For the most part, what’s in here is fairly simple, and it doesn’t appear that the base Connect system has been overhauled too much from before. It’s tweaking more than starting over again.

There is an in-car SIM that connects to the NissanConnect app, and can pull in updates from the automaker, but does little else otherwise. 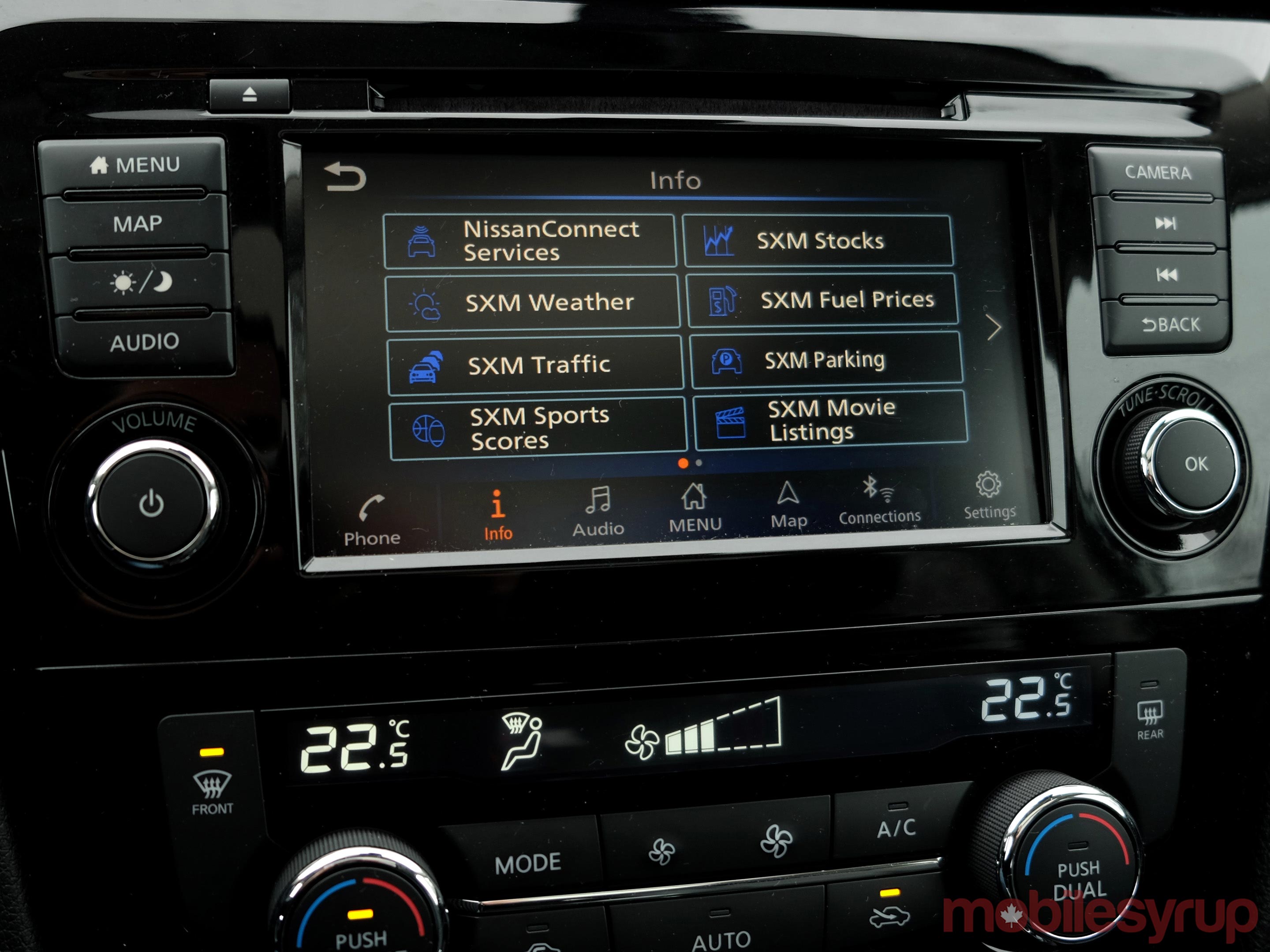 Nissan has a dedicated USB port under the dash specifically for smartphones designed for integrating with the infotainment system. There were two others in the centre console’s storage area. Only one phone can integrate when plugged in.

The Aux-In port is next to the dedicated USB port, plus a 12-volt socket. Neither Rogue I test drove had a Qi wireless charging pad.

Bluetooth is pretty standard, supporting both Siri Eyes Free and Google Assistant. Nissan’s own voice recognition platform is always accessible, and it’s been supposedly improved for better performance when seeking information or texting someone.

Certain mobile integration goes back years with NissanConnect, especially texting, and it comes included with every trim. The system is offered in four different packages, depending on if you get mobile, navigation and the connected services. Mobile and navigation may be a paid add-on at the dealership but the services part is subscription-based.

Subscriptions range from $16.99/month to $33.99/month. Or you could pay a little less by paying for the full year up front. There is a six-month trial to try out these features, though a majority of them aren’t entirely mobile-focused.

Some are intended for safety, like collision detection, alarm notification, and emergency calling. Others are for convenience, like roadside assistance, stolen vehicle locator and diagnostic and maintenance reports.

The mobile side of things centres on the ConnectedServices mobile app and app integration. With a subscription, the app can remotely start/stop the engine, lock/unlock doors, sound the horn and send destination addresses to the car.

As before, Facebook, Twitter, and TripAdvisor are the only apps that integrate directly through NissanConnect. Nothing new has come through for years, and despite their presence, those three apps don’t necessarily work well here.

There is a web portal that can do a couple other things, like plan a multi-stop journey. It’s unclear why you can’t just do that through the app. 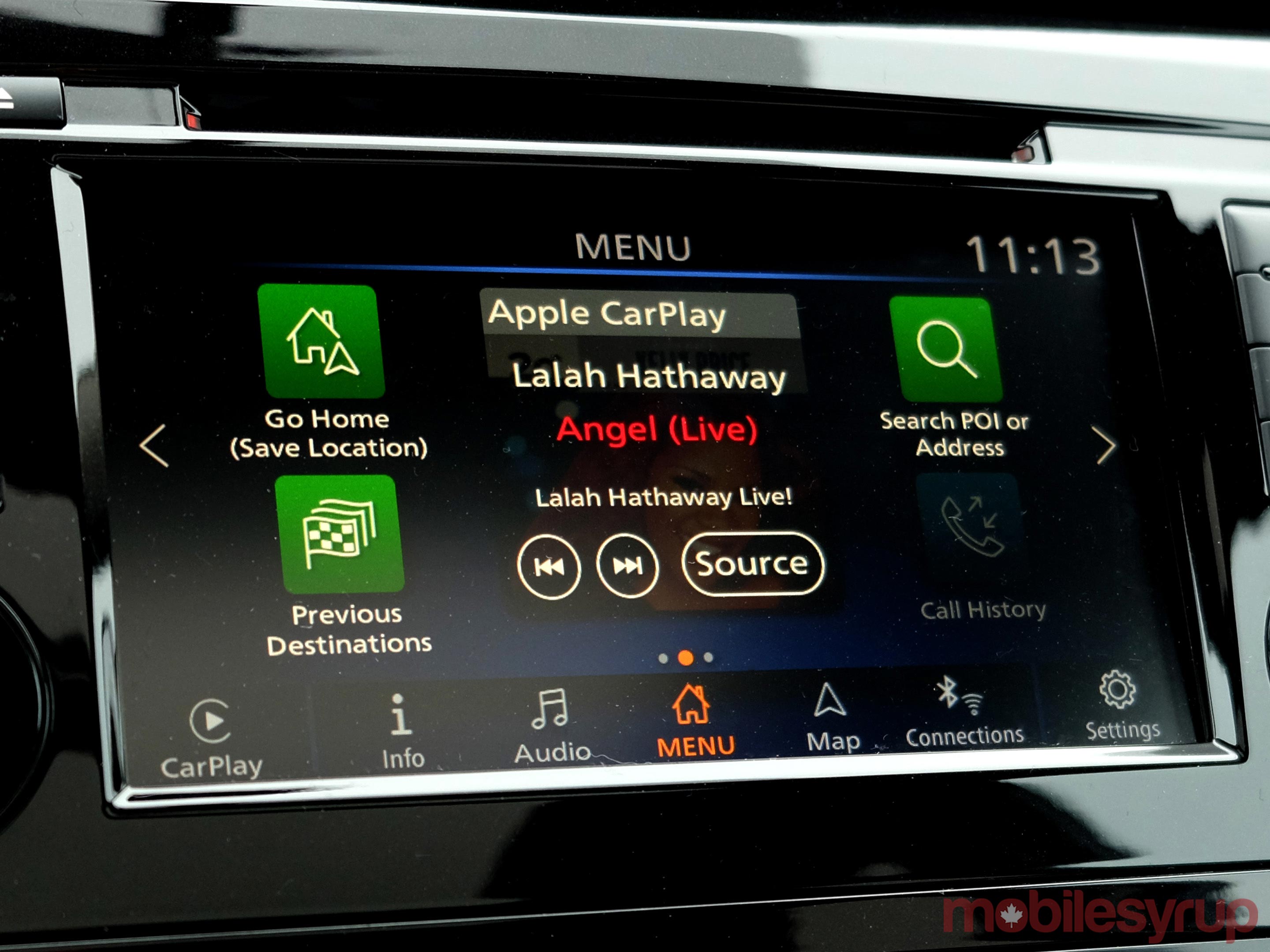 The Info section of the main menu is largely dependent on the services you’ve subscribed to. SiriusXM can provide quick updates to weather, traffic, fuel prices, parking, stocks, sports scores and movie listings.

Some of the basic info can be useful, though, and mirrors that made available via SiriusXM. I particularly liked the six-hour forecast, but also liked that the information could come through Nissan’s own voice platform. If I asked for one of the items on the list, I could hear the results, which turned out better than I expected.

However, the system wasn’t without its issues. The Pixel 2, for one, gave me a few headaches. I had to unpair and re-pair it twice after the system froze trying to delete it. The integrated text messaging was okay in that I could use some canned responses, but it wasn’t great at recognizing exactly what I said when sending or responding.

ConnectedServices is also outdated. Not just in the apps Nissan continues to support (not to mention the ones they don’t), but also in the way the app works. Paying all that money every month or year should come with a smoother, more refined experience, and that’s just not where it’s at right now. 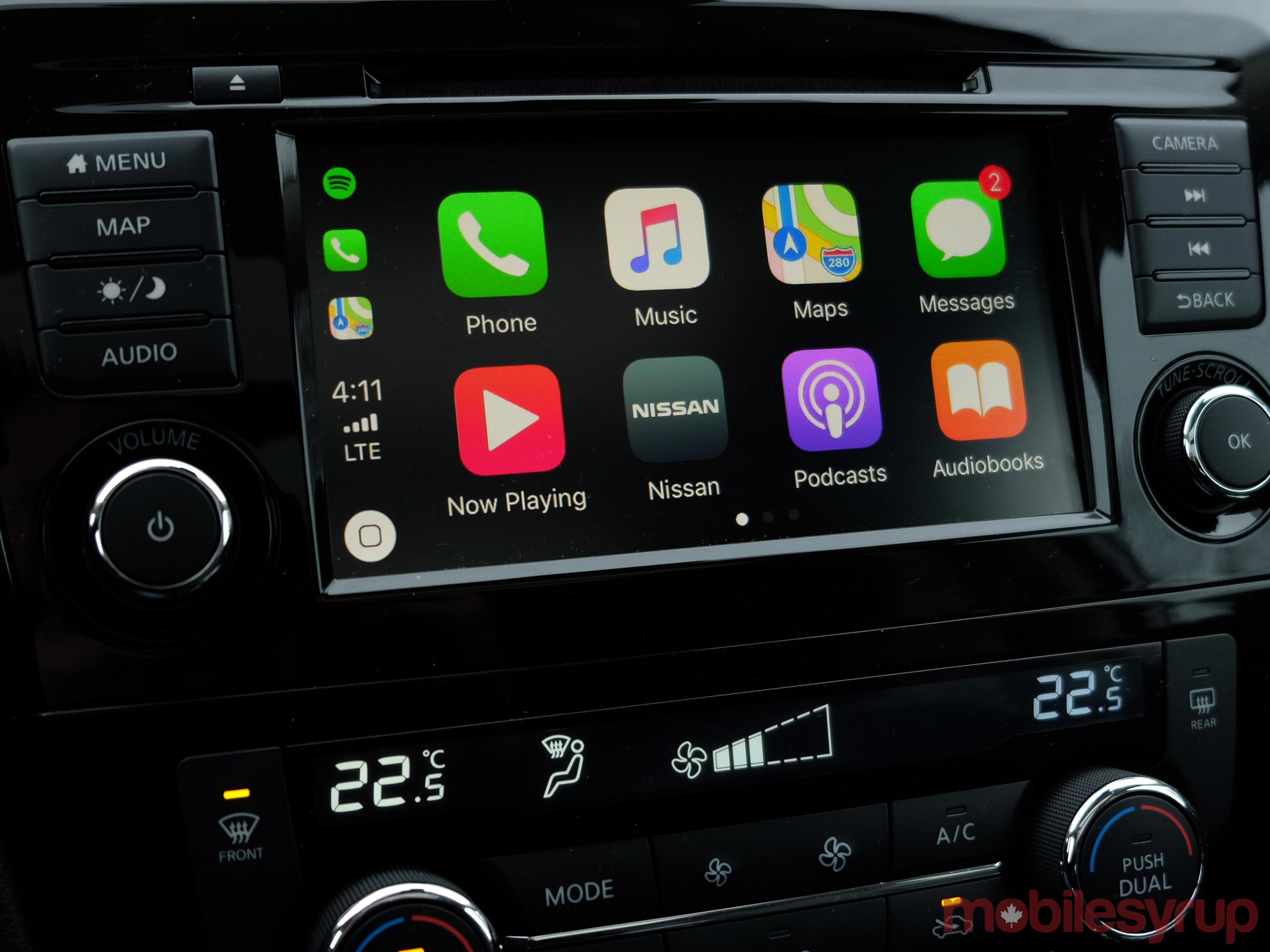 This is a huge addition for the entire platform, not least of which because they both offer the best mobile integration in this system. And, naturally, they’re respective improvement would outpace anything Nissan could do anyway.

Case in point, the mix of Google Maps and Waze in Android Auto tends to do better than Nissan’s own navigation. I didn’t mind using the built-in maps for getting around. After all, it didn’t take any data, but when I needed to get somewhere in tight traffic or find a point of interest, I opted for Google Maps and Waze.

Music playback is another thing. Bluetooth streaming is fine and no different than in other in-car systems, but having direct access to Spotify, Google Play Music, TuneIn, Apple Music and others through these platforms makes it so much easier.

Even messaging changes this way. Nissan offers its own option, but doing it through Google Assistant is more precise. Siri isn’t bad, but I tend to use it more for short, snappy responses.

There’s nothing especially groundbreaking in what Nissan offers through this current iteration of its infotainment system. The difference is stark from even a couple of years ago because CarPlay and Android Auto are now included.

And yet, Nissan presents the value proposition as the extra features NissanConnect offers. Is it worth the money? I’m not so sure. The app is in real need of an overhaul, and while I could appreciate some of what it’s in there, there needs to be more.

You don’t have to subscribe to all the features. It’s expensive and the roadmap for expansion is uncertain. But if you are going to get more out of what’s available here, make sure to get Apple and Google’s platforms.

"There’s nothing especially groundbreaking in what Nissan offers through this current iteration of its infotainment system. "