Oscar-winner Brandon Oldenburg explains how VR will change the movies 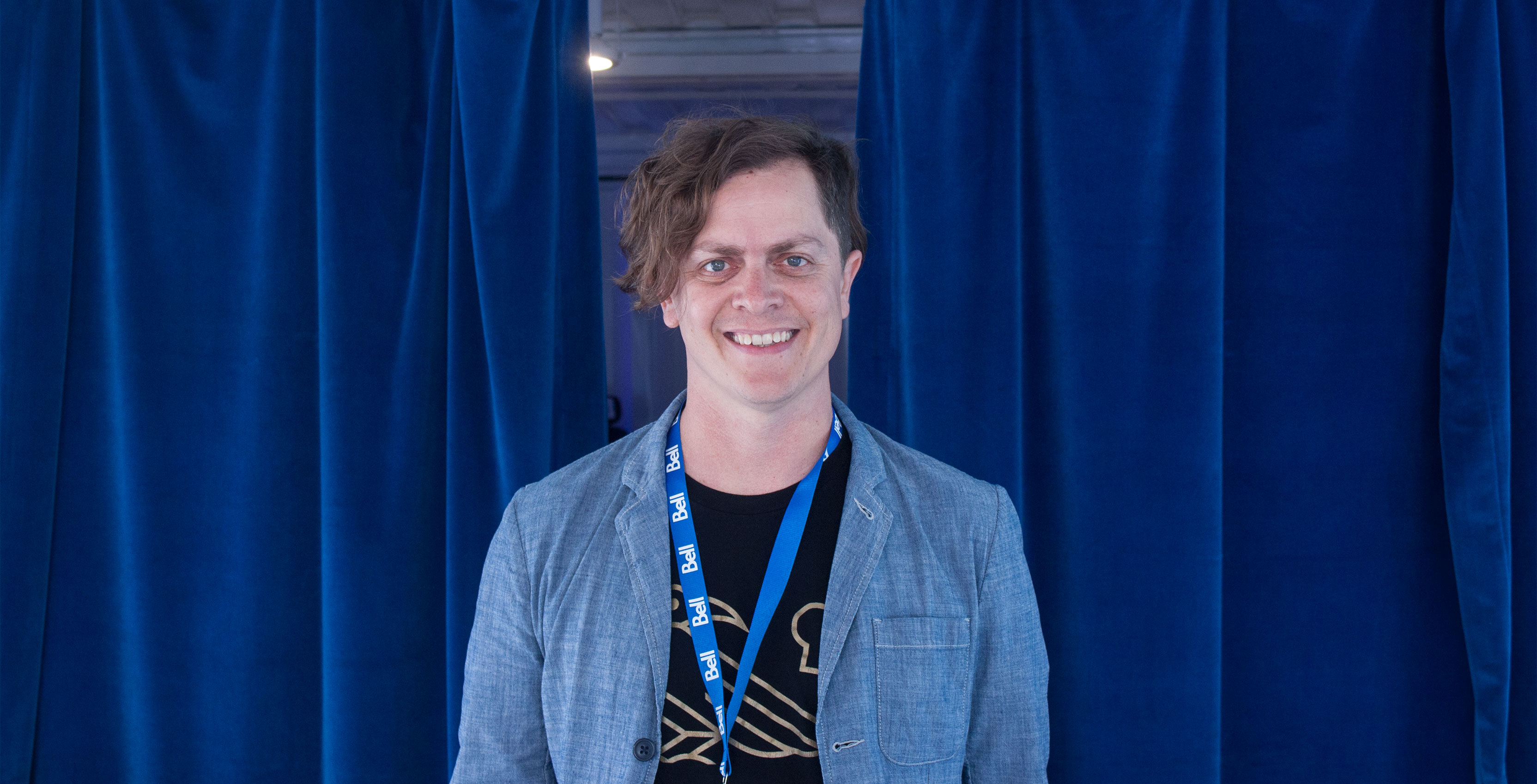 The Bell Lounge and VR Theatre is at the heart of Toronto’s David Pecaut Square, flanked on all sides by different corporate booths looking to draw visitor attention away from the occasional appearance of Hollywood royalty.

From a distance, one would be excused for assuming the VR theatre is yet another low-budget virtual reality pop-up where visitors don bulky headsets to try out a helicopter flying simulator, or some other such VR kitsch. Come closer, however, and you’re greeted by the smiling faces of Bell employees in neat sweaters, welcoming you to step through the blue curtains.

“Since the beginning of the year, we’ve had a lot of amazing opportunities…”

The space itself is small — intimate, really. There are six comfortable swivel chairs. On either side of the lounge are standing stations with computers hooked up to an Oculus Rift and HTC Vive VR headset.

It’s also here where I met Brandon Oldenburg — the smiling, bright-eyed, passionate co-founder and chief creative officer of Flight School Studio. As he warmly greeted visitors and invited them to sit down and watch a movie, it was easy to forget that he’s an Academy Award-winning filmmaker as well.

From art school to Flight School

Oldenburg got his start in filmmaking in 1995. After graduating from the Ringling School of Art and Design, he co-founded Reel FX with some friends from high school.

The studio released its animated short, The Fantastic Flying Books of Mr. Morris Lessmore, in 2011. The film toured a number of film festivals, ultimately garnering an Oscar nomination and win in the Best Animated Short Film category at the 84th Academy Awards.

From there, Moonbot went on to create a number of augmented reality film experiences, including Diggs Nightcrawler, which “had about 80 minutes of animated content in it, that can be seen from any angle.”

According to Oldenburg, his company was hesitant to pursue VR.

“At the same time, my former studio Reel FX dove headfirst into VR, and they got there at just the right time,” said Oldenburg.

Flight School Studio actually came about as a result of a merging of Reel FX’s VR team, as well as Moonbot’s creative leadership. The new studio is less-than-one-year-old.

“Since the beginning of the year, we’ve had a lot of really amazing opportunities for commercial work,” said Oldenburg.

Commercial work and, of course, getting an opportunity to be a part of events like the Bell VR Theatre.

Don a headset and take flight to a new world

Oldenburg’s Oscar is actually in a glass case outside of the Bell VR Theatre. The golden statuette casts an imposing figure, but the filmmaker does little to draw attention to the prize that most filmmakers spend their whole lives pursuing.

Instead, Oldenburg — and Flight School Studio executive producer Taylor Williams — are more interested in letting visitors don a VR headset and do what most people do at TIFF: watch a movie.

The films range in subject matter and duration, and make no mistake, Flight School is also represented.

Oldenburg and Williams brought with them a sneak peek of Manifest 99, an animated short that literally forces viewers to experience the film through the eyes of a murder of crows. Viewers move through the film’s story by locking eyes with different crows and swapping from scene-to-scene.

In a way, this directed approach to VR filmmaking is how Manifest 99 solves a VR issue that both Oldenburg and Williams described as a problem of identity.

“I think that there’s a bit of an inherent existential crisis in VR, of ‘Who am I?’” explained Williams. “That’s inherent in the story. ‘How do I experience this, who am I, am I somebody, or am I just watching it? And in some cases in these films, you are just watching, you are yourself… but in some places, you’re meant to engage with the story.”

Manifest 99, explained Williams, is meant to engage its audience by encouraging them to think of themselves as integral to solving the film’s central mystery of character.

Answering these kinds of questions — pushing the boundaries on a medium most typically associate with video games — is why Flight School as a whole pursues VR filmmaking.

“…in a movie with high action and high stakes, it’s cutting and it’s flipping around and it’s very sort of kinetic in the way that camera works.”

According to Oldenburg, virtual reality is on the cusp of creating a new kind of culture, one where it truly is possible to live and breathe art.

“It’s opening the door for more people to be like Salvador Dali and Andy Warhol, who weren’t just creating art, they were living in their own artistic world every moment of their life,” said Oldenburg.

Among the animated films at the Bell VR Theatre are Son of Jaguar, co-created by Reel FX and Google Spotlight Stories, and Baobab’s Rainbow Crow.

Directed by Jorge Gutierrez, Son of Jaguar places viewers on the sidelines of a luchadore match between the eponymous Son of Jaguar and an evil wrestler. As the story progresses, it becomes clear that the viewer isn’t a passive entity, and is, instead, a spirit watching the match.

In contrast, Baobab Studios’ Rainbow Crow fixes the audience as passive viewers in the middle of a forest. Characters move from mark to mark in a 360-degree circle, and the audience effectively spins in place to keep up with an excitable skunk (voiced by Constance Wu), a feisty butterfly (voiced by Diego Luna), and the eponymous Rainbow Crow (voiced by John Legend).

These two wildly different VR films speak to what Oldenburg describes as being “in the donut, instead of in the round.”

Live theatre is often “in the round,” where the audience can see at least three sides of the stage. In contrast, VR places the audience in the middle of a donut. The audience can turn and look all around themselves, because scenes aren’t restricted by a two-dimensional plane, like traditional cinema.

“VR is more theatre in a donut,” said Oldenburg. “You’re in the donut hole.”

Both Oldenburg and Williams also insist that virtual reality is not intended to displace or replace traditional cinema. Instead, it’s a tool meant to accentuate the filmmaking process — or a way for audiences to experience a different kind of film than in traditional cinema.

“…it’s such a new medium and the toolset hasn’t evolved yet to the point where the quality is catching up.”

“In some ways, you watch a movie like The Revenant, and it almost feels influenced by VR,” said Oldenburg. “Because you’re normally in a movie with high action and high stakes, it’s cutting and it’s flipping around and it’s very sort of kinetic in the way that camera works. In that film The Revenant, it’s almost like you’re on a very slow rail and the camera was panning like you would pan if you’re sitting in a chair watching a lot of this stuff happen around you.”

Williams also explained that more filmmakers are using virtual reality as “a tool in production.”

“And that changes the filmmaking process in very fundamental ways, when you can be filming something on green screen and you’re not sure how your camerawork is going to fit into the digital set, and you can just pop on a headset and see it,” said Williams.

Convincing audiences to give virtual reality a shot

Even though most major tech corporations have offered support for virtual reality, to a lot of people, the tech sometimes comes across as a gimmick, instead of a genuine medium unto itself.

Additionally, with companies like Sony and Valve pledging support to virtual reality gaming headsets, VR can sometimes come across as an extension of the gaming industry.

Still, through their own work on virtual reality films, as well as the work done by groups like the Lumieres Academy — responsible for dispensing the annual Lumieres Award — virtual reality is quickly gaining popularity within the film industry.

“I don’t think there’s as much resistance as you may think,” said Williams. “It’s just, right now, it’s a such a new medium and the toolset hasn’t evolved yet to the point where the quality is catching up.”

“When you tried on 3D glasses for the first time, you probably went, ‘Oh, this is cool,’ but then sometimes that luster wears off really quick and then you’re like, ‘Man, this makes it super dim and it’s really annoying to wear these for two hours,’” said Oldenburg.

“If I’m not creating something has you engaged, then that’s my failure as a creator, not your failure as an audience member,” said Williams. “I think where 3D filmmaking really hit a road bump is when people started just converting every film into 3D whether it should have been or not.”

The Bell Lounge and VR Theatre is open to the public until September 17th, 2017.