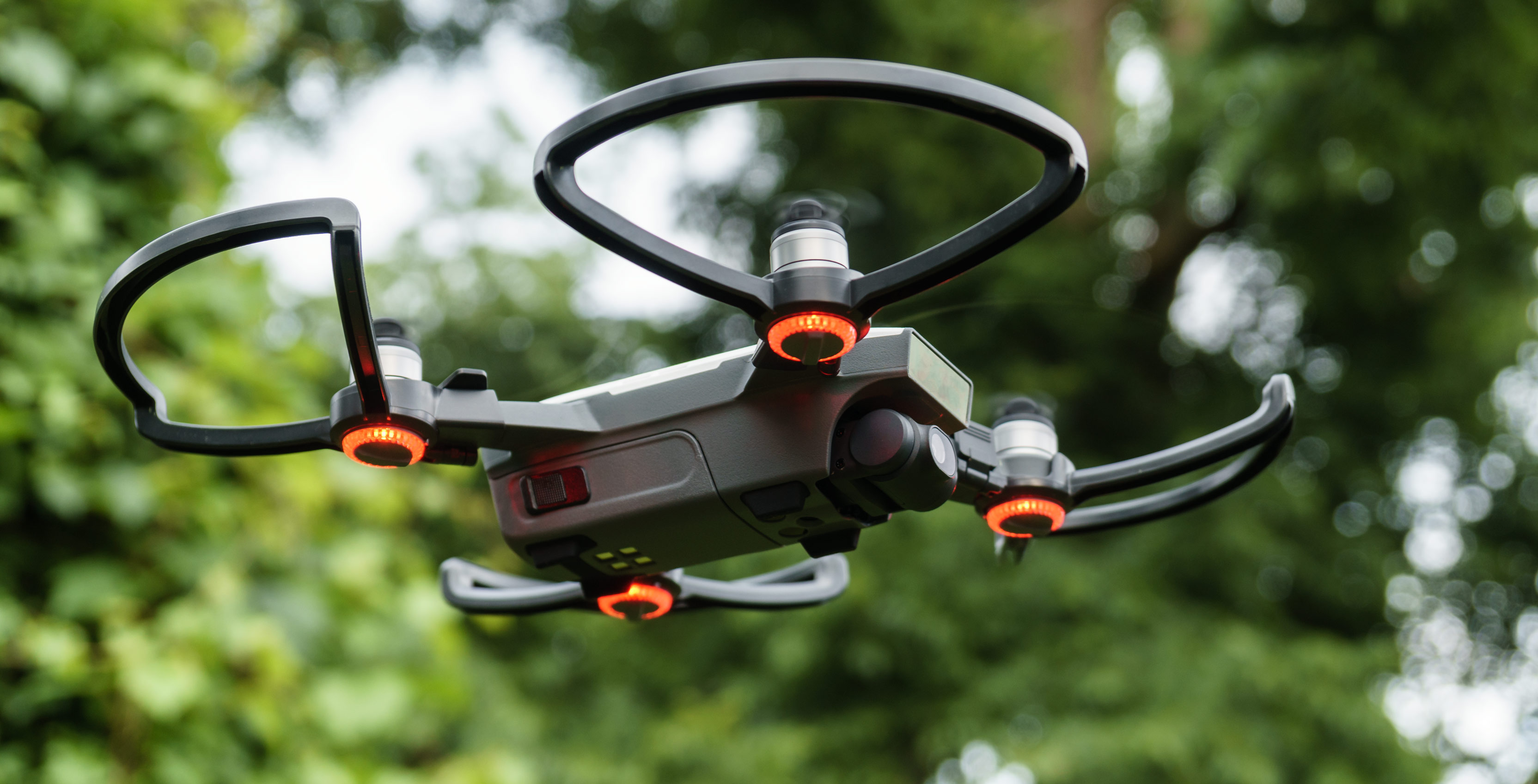 Since joining MobileSyrup about two-and-half years ago, I’ve become a passionate photographer. And like most people in the hobby, I’ve cast an envious eye to those who have taken the plunge and bought a drone to add to their kit. The one issue is that drones are still on the expensive side, making it hard to justify buying one, especially when there are other tools out there that can more immediately help my work here at MobileSyrup.

So when DJI announced the Spark, it’s most affordable consumer-facing drone to date, I knew I had to try one and write about it. I imagine a lot of other Canadians are interested in the Spark as well, especially as to how it fits within Canada’s current regulatory framework. That said, the Spark is the first drone I’ve flown, so I wouldn’t look to what I’ve written here as a review. Instead, I’ve tried to parse whether it makes sense to buy in Canada. If that’s something you’re interested in finding out, read ahead. 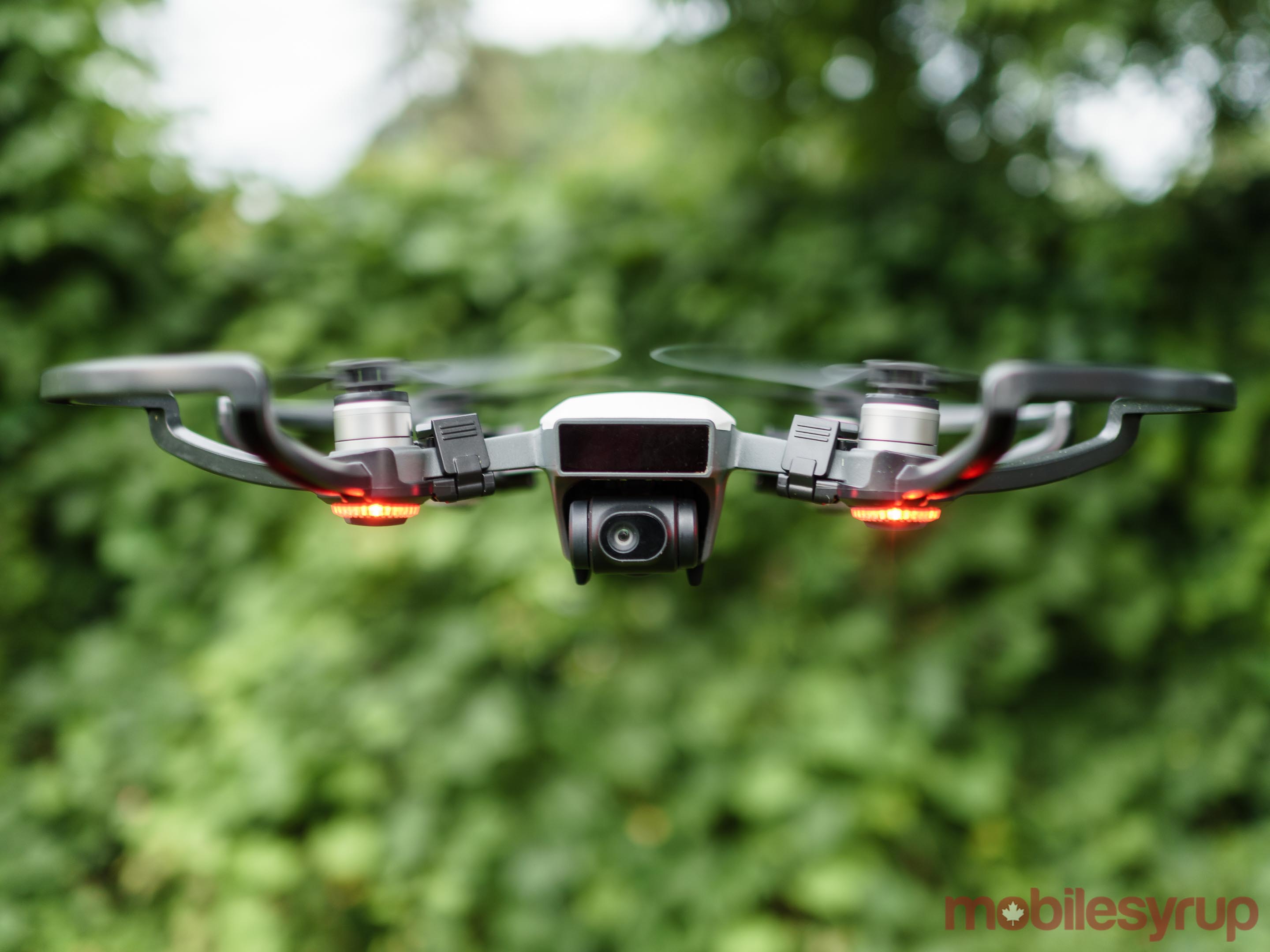 At exactly 300 grams, Spark is DJI’s lightest drone to date. While it doesn’t include the folding arm mechanism that helps make the Mavic Pro so easy to transport, it is more than twice as light as DJI’s previous featherweight champion. I was able to store and carry my review unit in a Peak Design Everyday Sling, a 10L carry bag that’s designed to transport a camera, laptop, as well as several other accessories, with ease.

It also helps that the Spark comes in a handy hard foam case that can store the drone itself, two extra batteries and four replacement propellers — unfortunately, there’s no room for the optional propeller guards consumers can buy alongside Spark. The included case can fit into almost any backpack and helps to make it even easier to transport the Spark.

Without overstating things, the compactness of the Spark is its best feature. The difference between a small drone and much larger one is a lot like the difference between a point-and-shoot camera and a DSLR. They say the best camera is the one you have with you. The Spark makes a compelling argument for the same being true for drones. In the week I had the Spark, I took it everywhere with me in case the opportunity came up to fly it after work. Had I had a heavier drone like the Phantom, I don’t think that would have happened. 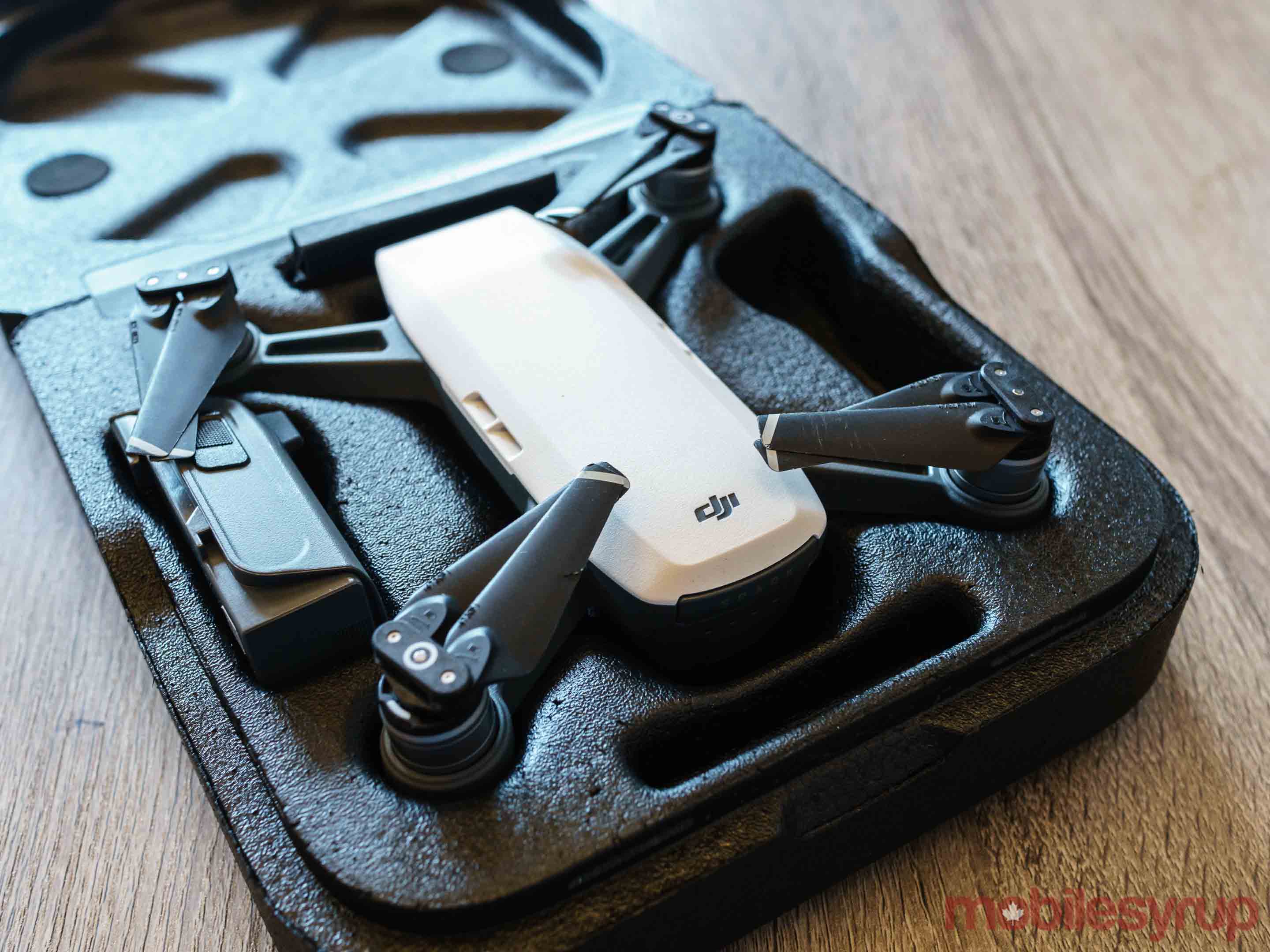 On a more philosophical level, the compactness of the Spark makes it more approachable. More so than DJI’s other consumer-facing drones, the Spark looks far removed from the military tech that spawned its siblings — though it still sounds like you angered a hornet’s nest anytime it’s in flight. During my time with the drone, I had multiple curious people come up to me to ask me about it. Each time, the Spark’s cute appearance, as well as the fact that it can lift off from a person’s palm, quickly won people over.

Of course, DJI had to make several compromises to make the Spark so light.

In ideal conditions, the Spark’s 1480mAh battery should keep it in the air for approximately 16 minutes. However, stronger winds reduce flight time. The DJI GO 4 mobile app makes it easy to keep track of remaining battery life, with a real-time display of estimated remaining flight time along the top of the app’s main screen. However, given that it takes approximately 80 minutes to charge one of the Spark’s battery using the included USB adapter, at least one or two additional batteries are a must buy if you plan to fly it for any extended period of time.

As such, the Spark is not quite as affordable as its $699 CAD price tag would suggest. In fact, all most any one considering the Spark would likely be best served by buying the fly more kit DJI offers. Priced at $980, this kit includes an additional battery, extra propellers, remote control, battery charger and more. The propeller guards, in particular, are a smart investment since they help make it safer to operate the Spark, especially in smaller spaces. 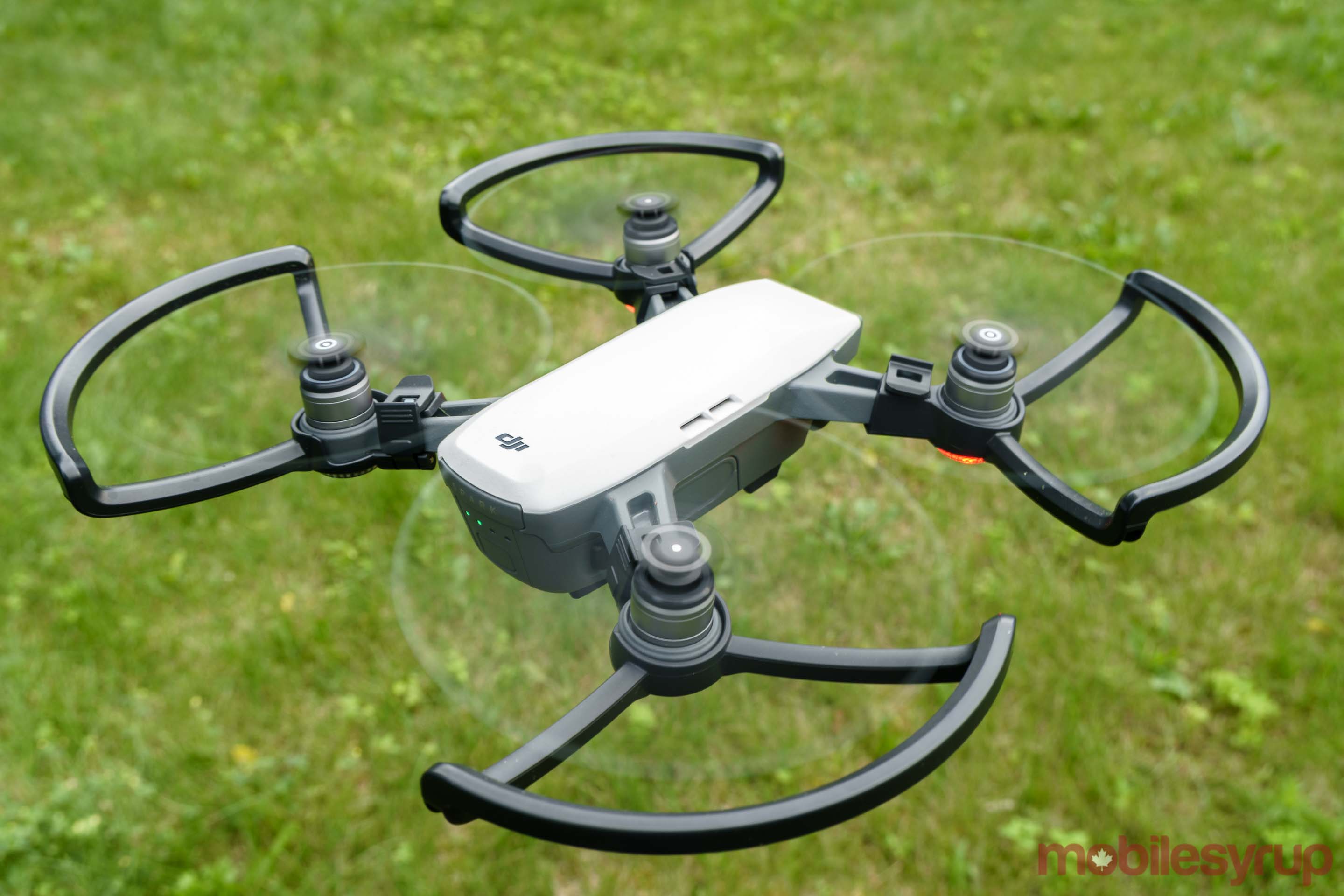 Besides its small size, the Spark’s other marquee feature is a new gesture flying mode that allows it to fly without ever picking up a smartphone or remote control.

In practice, using gestures to control the Spark is not a very practical way to go about flying it. In my experience, I found the Spark didn’t always register my gestures with 100 percent accuracy.

The much more accurate (and fun) way to fly the Spark is to use the DJI GO 4 app, available on iOS and Android. After watching a couple of YouTube videos on the subject, and practicing in the backyard of my dad’s house, I was able to get the Spark to do figure eights and pirouettes. Moreover, the app is incredibly responsive, even when it only has a Wi-Fi connection to fall back on. I didn’t experience any input lag and the Spark’s video feed came out clear and crisp.

The one issue with the app is that it has some Android compatibility issues. Depending on the Android phone you own, you might not be able to properly connect to the Spark using its built-in Wi-Fi connection. Despite multiple attempts, I wasn’t able to get my OnePlus 5 and Spark to play together nicely. Meanwhile, I had no such issues with my iPhone 6S.

Another new flying mode is a feature called quickshots. These allow Spark users to easily replicate the kind of cinematic shots you see in a lot of the best drone videos. One called helix, for instance, sees the Spark fly in an outward circle around a single user defined point. With each quickshot, Spark will handle automatically the camera controls, making it easy to produce epic footage. With a bit of practice, these maneuvers are easy to replicate manually, but there’s still a wow factor the first time you tell the Spark to shoot straight up in the air using the rocket quickshot. 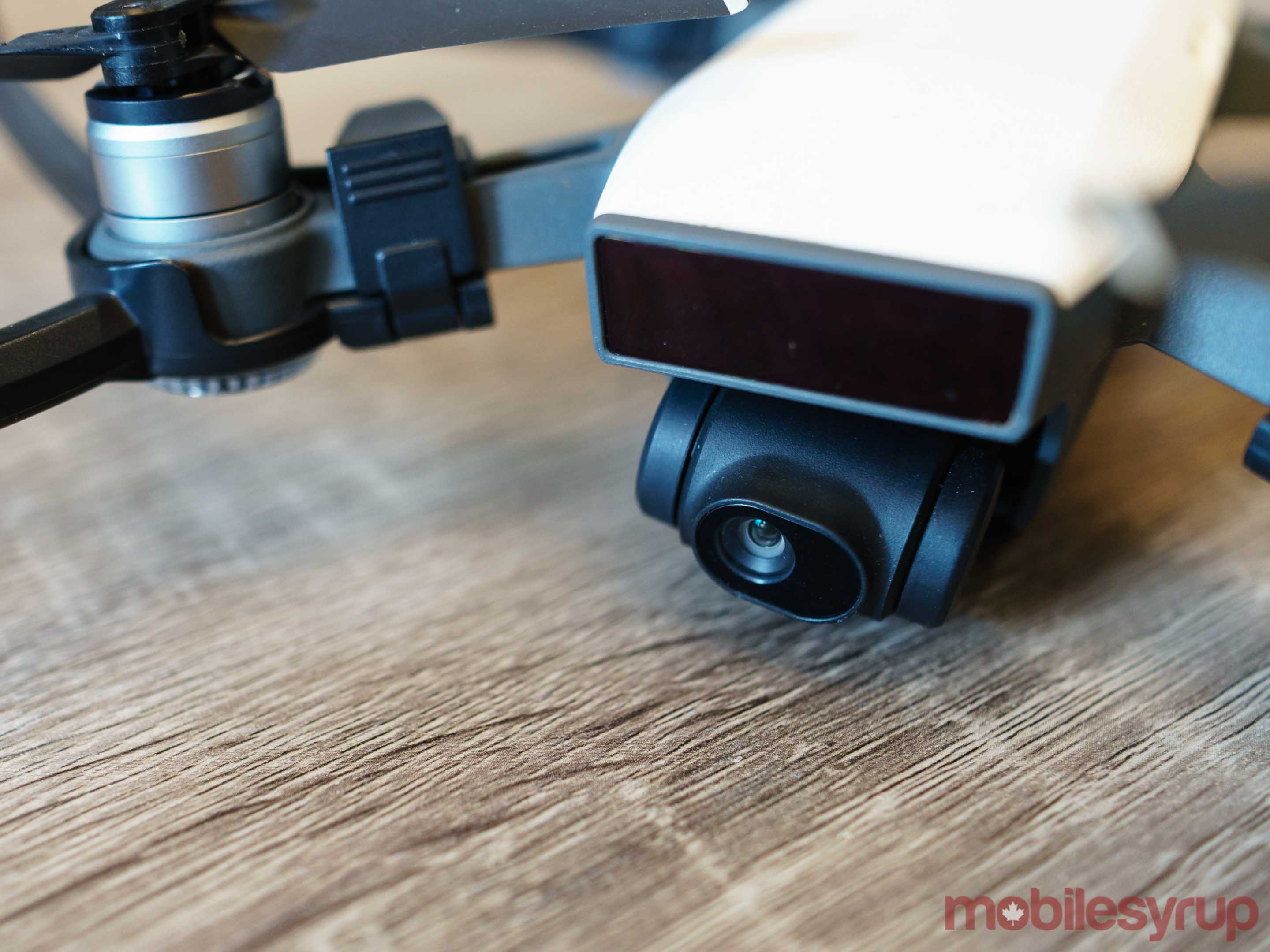 When it comes to the Spark’s camera, it’s best to think of DJI’s drone as a flying smartphone camera, with all the positives and negatives that entails.

Drones in this class are typically referred to as ‘selfie drones.’ However, there are much better ways to take a picture of oneself. Close up, the Spark’s wide angle lens distorts faces, making them look unattractive. Moreover, launching a drone any time you want to take a photo with the squad seems like a good way to test the patience of several friends all at once.

As a way to capture a landscape, however, the Spark’s camera is much more compelling. It features a 12-megapixel 1/2.3 inch sensor, the same size sensor as found on the Mavic Pro. Photos turn about as good as a landscape shot taken with a smartphone, with the Spark doing a good job of keeping highlights in check. It’s possible to get great shots with the Spark, especially if you make an effort to shot at sunrise or sunset. However, one issue is that the Spark can only output images in JPG format, which limits the amount of post processing you can do with any image.

The highlight of the camera, however, is the video it’s able to shoot. With its built-in two-axis gimbal, footage come out incredibly smooth. I imagine with practice it would be possible to create the kind of vacation videos that would make all your friends jealous.

That said, video recording is limited to 1080p at 30 frames per second, meaning both out 4K and slow motion capture are out of the picture. The Spark also doesn’t support cinema picture profiles, which again limits the amount of post processing and colour grading possible with any footage the Spark captures. DJI also hasn’t released a set of neutral density (ND) filters for the Spark, so filming on a particularly bright day is something of a challenge.

Those limitations aren’t necessarily a bad thing, as they make it very easy to operate the Spark as a camera. However, it does mean that if you want to use the Spark for aerial photography and film-making, it doesn’t offer much room for growth. It also means the Spark is not a low-cost replacement for the Mavic Pro or Phantom.

Should I get the Spark if I live in Canada? 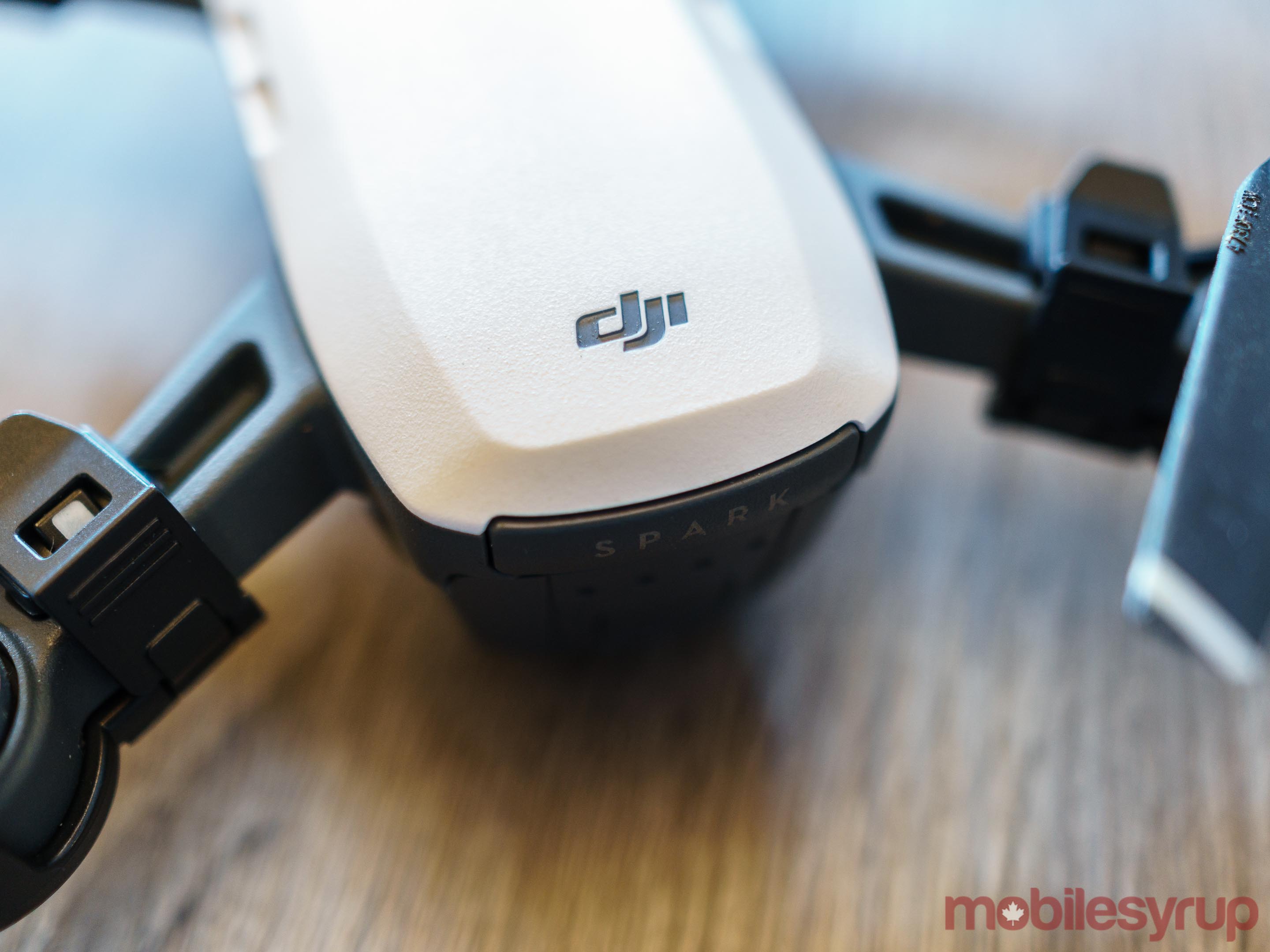 One of the main reasons I wanted to write this article was to contextualize the Spark within Canada’s new drones.

Canada’s drone laws have changed significantly since DJI first announced the Spark, with the promise of more changes to come in the future.

When the company announced the Spark on May 24th, it was illegal to fly any drone weighing between 250 gram and 25 kilograms closer than 9 kilometres with the centre an airport. At the start of July, Transport Canada issued a new interim order, reducing the distance pilots have to keep their drone away from an airport to 5.5km. In addition, the ministry eliminated the sanction against flying near buildings and animals, as well as reduced the distance at which pilots could fly their drone near other people to 30 metres against the previous order’s 90 metre restriction.

Living in Toronto’s Etobicoke suburb, the new interim regulations allowed me to fly the Spark at Humber Bay Park West, High Park, Echo Valley and my dad’s backyard. Previously, I would have had to more or less leave the city to use the Spark.

On July 15th, Transport Canada published draft regulations it plans to implement later this year. The entire document is viewable on the ministry’s website. The two points that stand out is that any Canadian who wants to own and operate a drone recreationally will be required to pass a written knowledge test and acquire liability insurance with a minimum of $100,000 of coverage. Moreover, the newly purposed rules use more precise language. For instance, the current interim order says pilots cannot fly their UAV within 30 metres of the “public,” while the purposed law amends “public” to “person,” a much more restrictive definition.

For the most part, many of the newly purposed rules seem reasonable to me, but they’re likely to make the Spark unappealing to some people within its target market.

When Transport Canada announced its new proposed laws, the most affordable insurance option MobileSyrup found was $90 per year. Another company, Spark Insurance, offers policies that cost between $400 and $500 a year. Obviously, the industry for drone insurance is still young, but even when it matures, it might not make much sense to buy the Spark as a first drone. Between the cost of the drone itself, the time and money involved in securing a license and then the potential money involved in insuring the drone, Canadian consumers will be required to pay a lot of money to buy a drone that’s aimed at casual hobbyists. 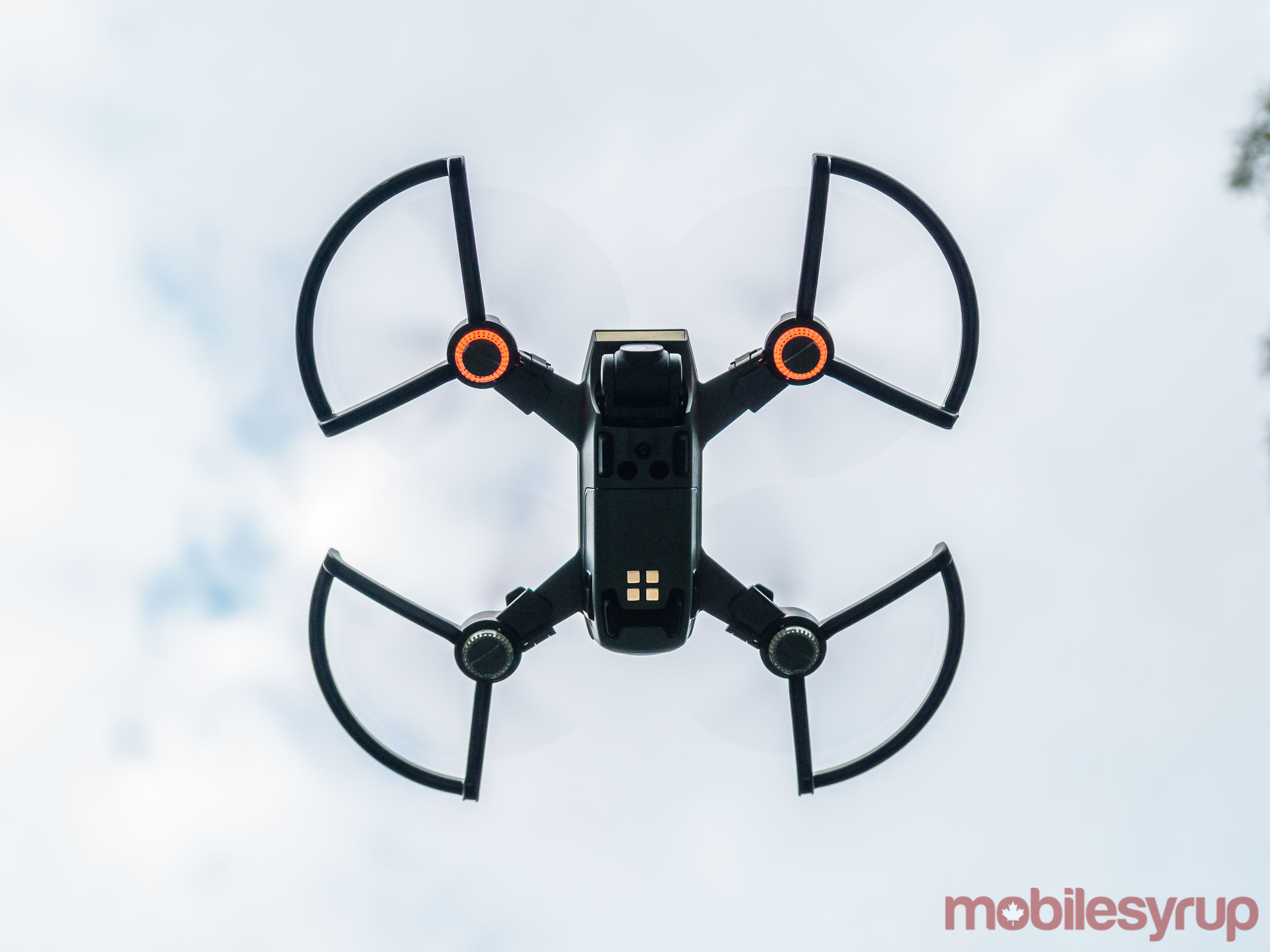 When I think about all the gadgets I’ve had the privilege of testing for MobileSyrup, the DJI Spark is definitely the one I’ve had most fun with, and I was genuinely sad when I had to return it.

That said, I’m not sure I would recommend it to people looking to buy their first drone.

It’s certainly one of the most advanced consumer drones ever released. Moreover, in terms of features and user experience, it surpasses almost every other beginner drone out on the market. However, if you’re a beginner, $699 is a lot of money to spend on something you will probably crash and lose.

That’s not to say the Spark is unfairly priced, but with the course Transport Canada is now on, you have to be committed to the hobby before a $700 drone makes sense. Most people would likely be better served by buying a $100 to $200 drone, ideally one that under 250 grams, before upgrading to one of the company’s more advanced drones like Mavic Pro once they’ve decided flying a drone is something they love.