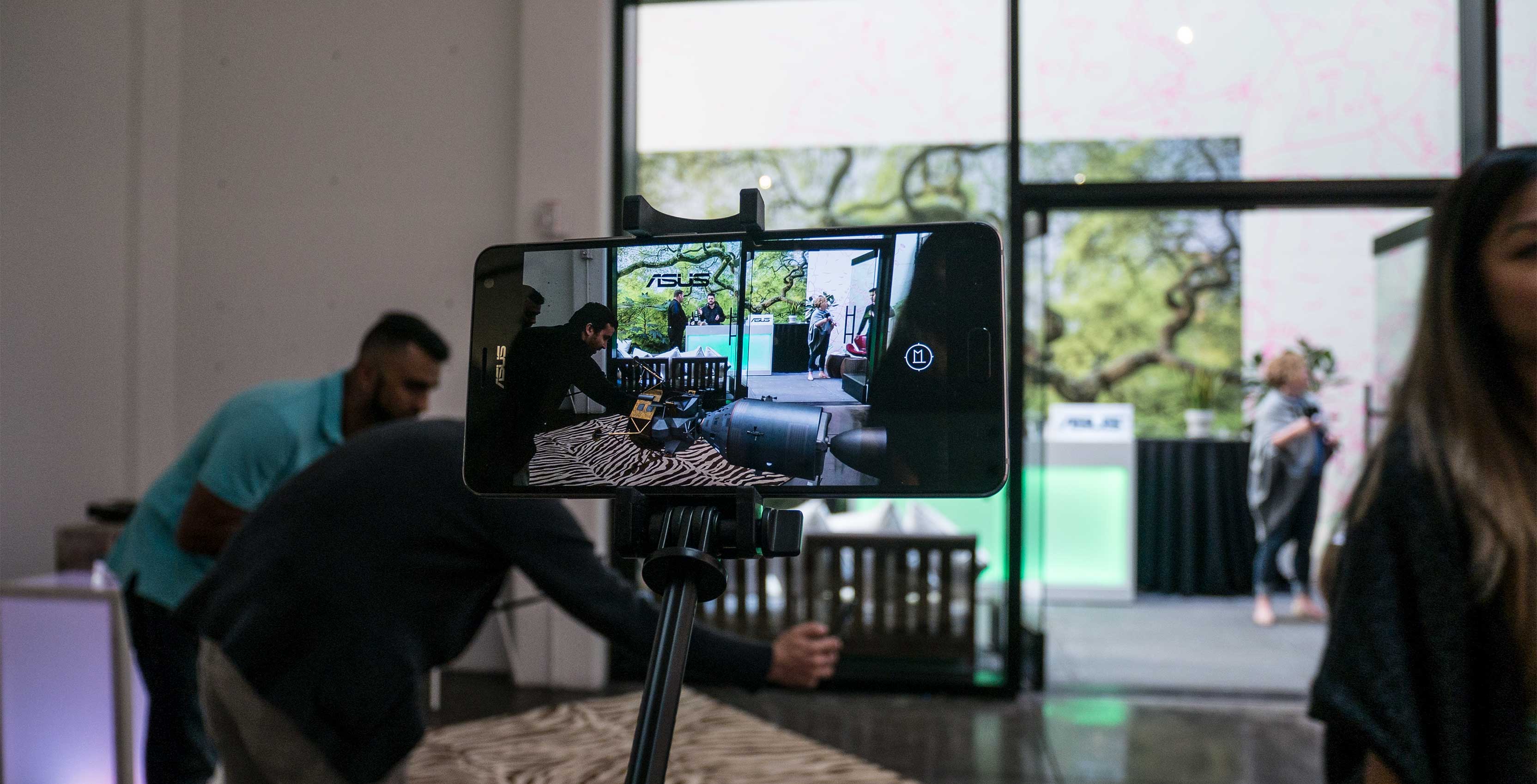 From the front, the Asus ZenFone AR looks just like an average phone.

You’d never know it was one of the most advanced augmented reality devices available to consumers — able to scan its surroundings, track motion and sense depth to provide hyper-realistic and spatially accurate virtual overlays over top of the real world.

But flip over the 5.7-inch device and the impressive package of camera sensors that work to create these experiences immediately stand out. 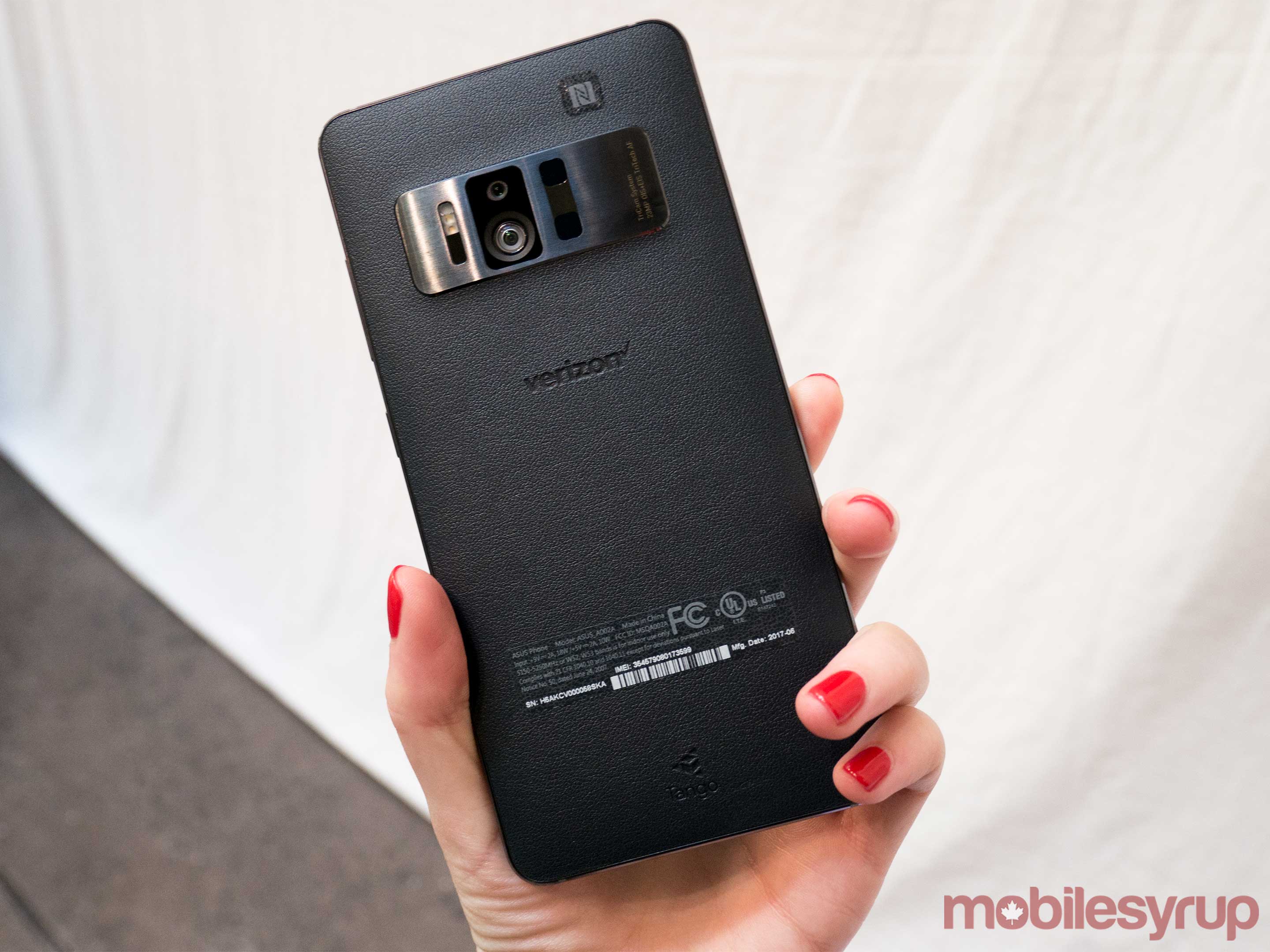 The phone’s camera module includes three rear cameras, a 23-megapixel shooter for visuals, a depth sensing camera with an infrared projector for measuring distances and a motion tracking camera that locates the device within the space.

Backing up these sensors is a Qualcomm Snapdragon 821 processor with Adreno 530 GPU, 6GB of RAM and a 3,300mAh battery.

With a decently sized battery and those extra sensors under the hood, my first assumption was that the Asus ZenFone AR would be heavier than the average phone — but holding it in my hand during a hands-on event in San Francisco, it felt downright featherweight. 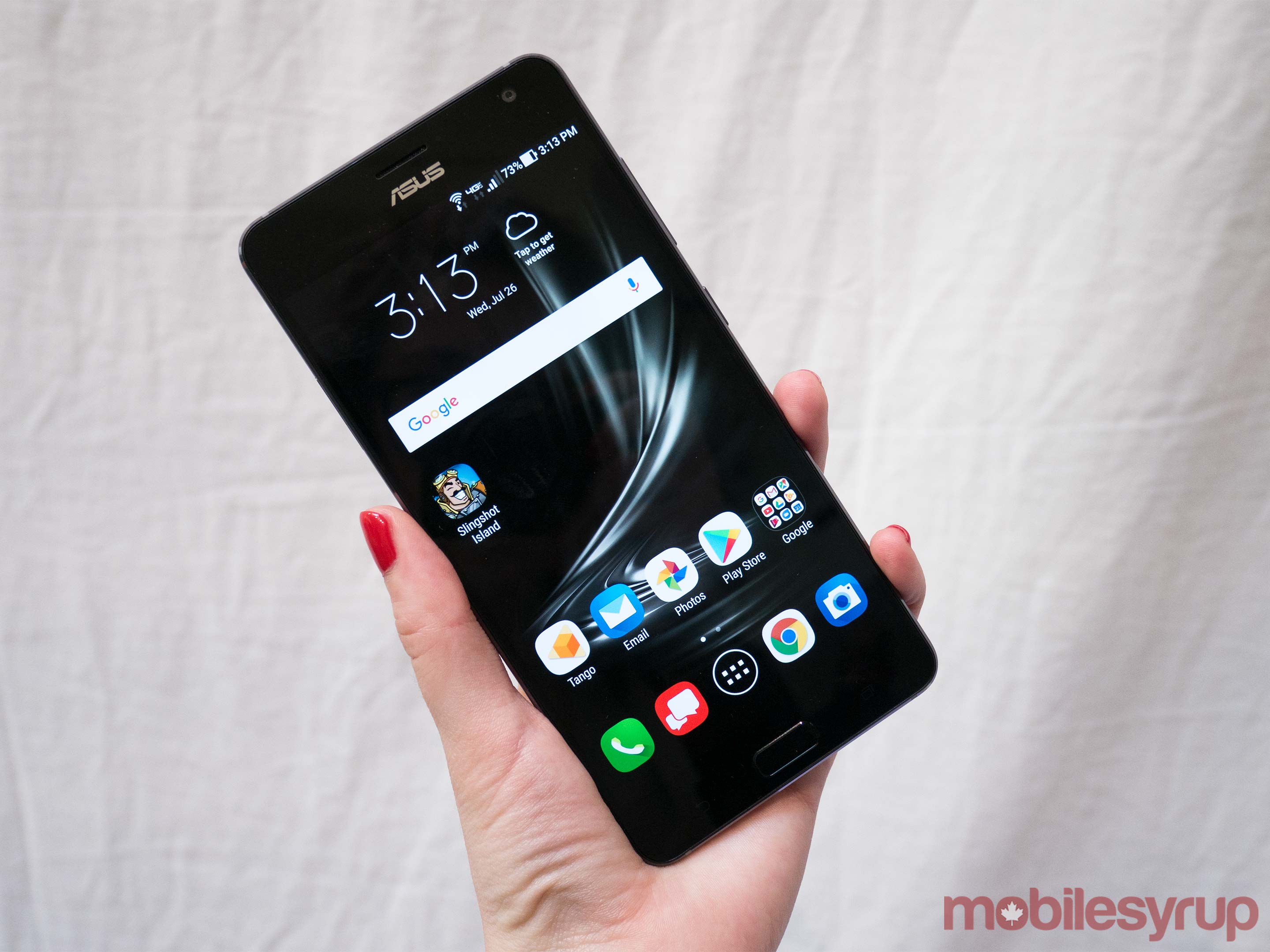 At 170 grams, it’s heavier by a few grams than, for example, the Google Pixel XL, but it’s a whole lot more manageable than the 259 gram Lenovo Phab 2 Pro, the first ever Google Tango smartphone to hit the market.

The Phab 2 Pro featured three rear-facing cameras and a 4,050mAh battery, but hit the market for only a short period of time in Canada after a shaky rollout.

The Asus ZenFone AR, set to hit store shelves in Canada in the coming weeks, will likely be the first real dedicated AR device widely available to Canadian consumers.

Randall Grilli, director of media relation at Asus, tells MobileSyrup the ZenFone AR is a strong example of the company’s focus on purpose-built technology.

“The Asus ZenFone 3 Zoom we purpose-built to be a great camera phone,” he says.

“While the AR still has a great camera, we weren’t trying to make the penultimate phone that does everything. We made [the Asus ZenFone 3 Zoom] for photography, and [the Asus ZenFone AR] for augmented reality.”

Grilli also indicated that Google’s Tango technology may make its way into other Asus products in the future. 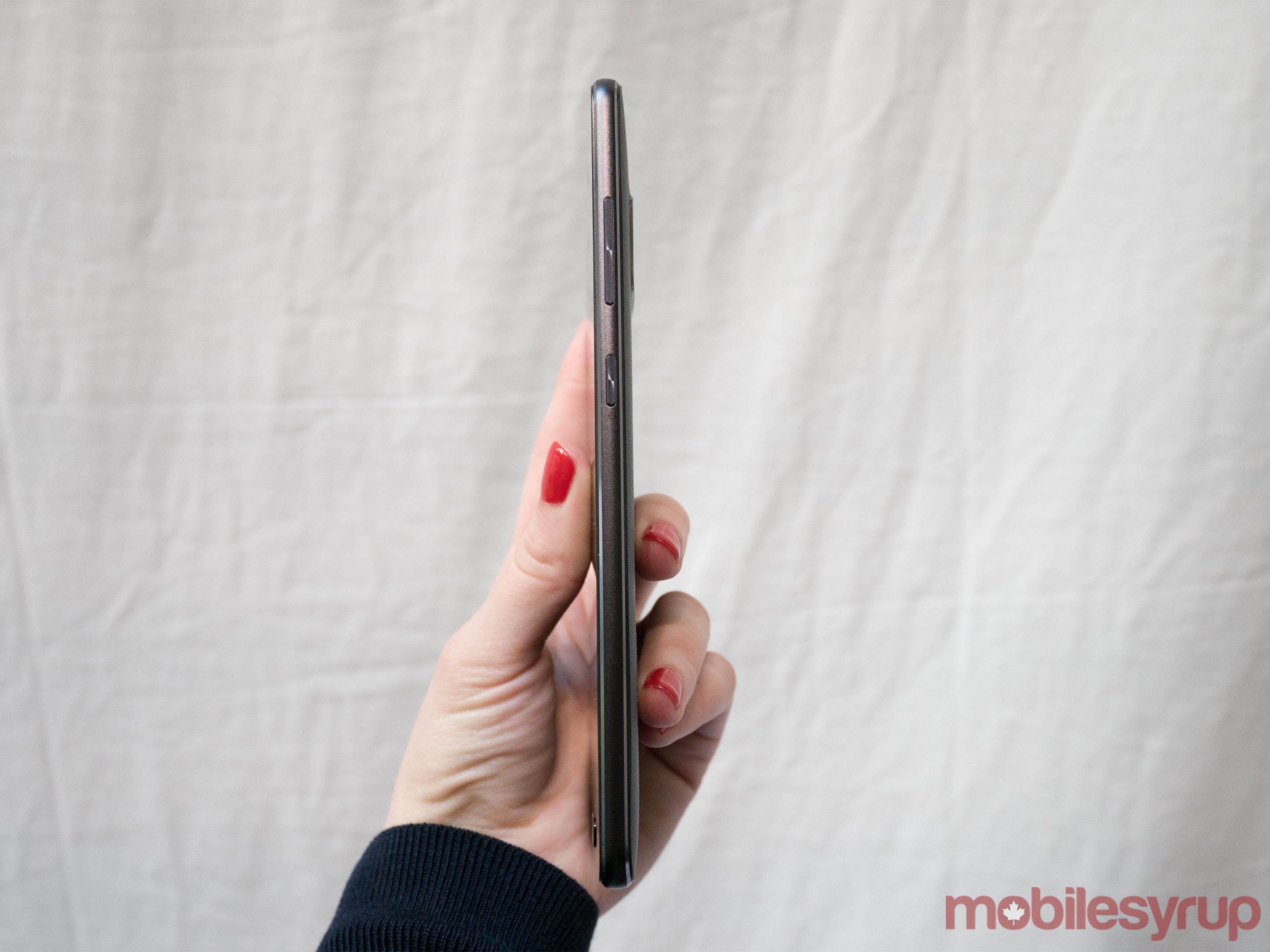 “A lot of the mapping, for example, it’s great that you can do it on a phone, but if you want to take it to the next level — say you want to use CAD, for example, or something like that — I think you could see AR having an easy leap to doing something like that, but you’re going to want a much bigger screen, so then I think you’ll see crossover into [larger] touch screen territory, things like that.”

As for the looming threat of Apple’s AR ambitions — which are bound up in ARKit, set to arrive with iOS 11 and run on Apple A9 and A10 processors — Grilli says hardware remains key.

“Until they announce hardware, it’s the end of the story basically. Because they need the depth, the motion and the tracking to really have the full experience.” 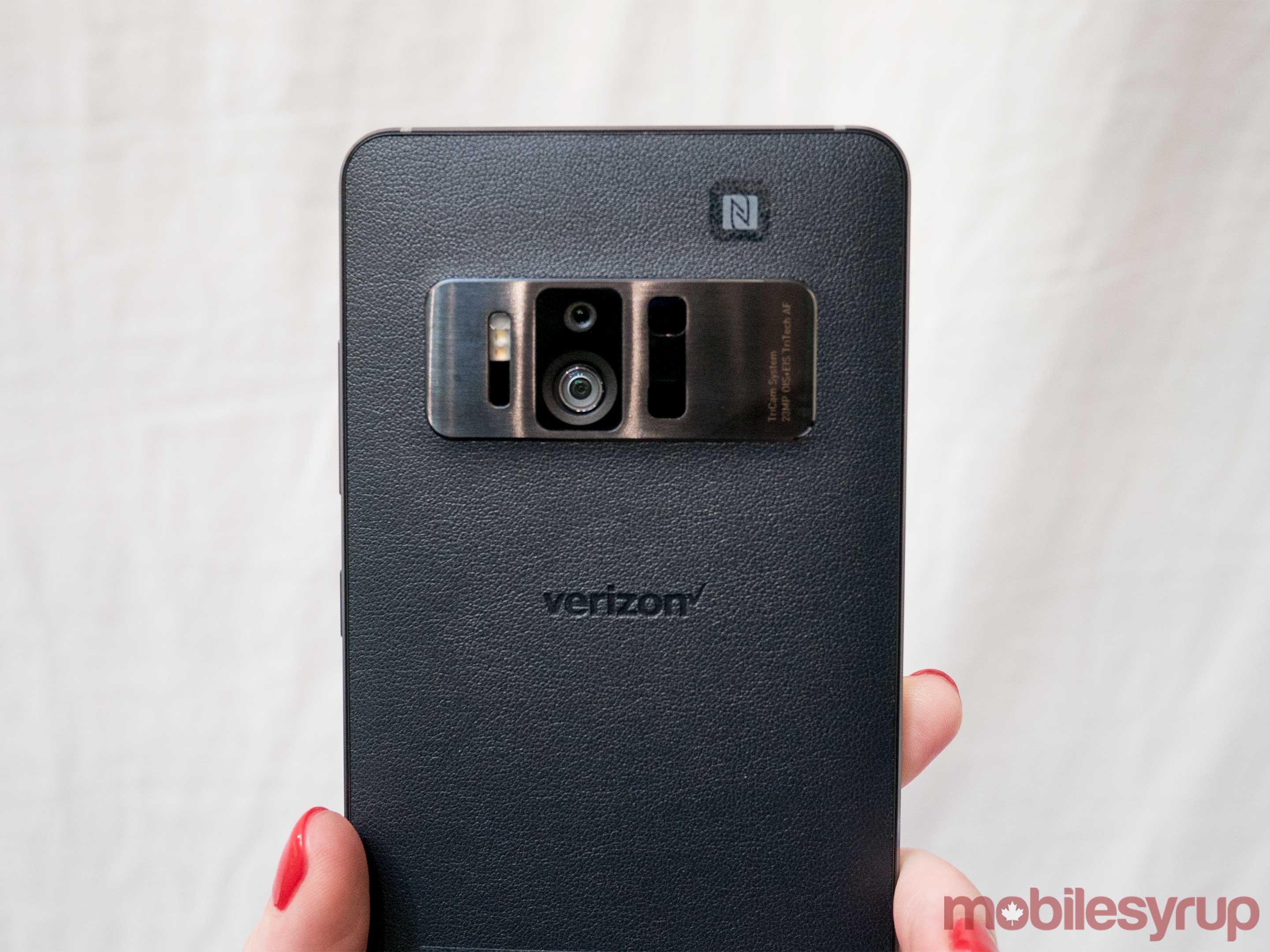 Grilli notes that one could reasonably expect more AR-focused hardware from Apple in the future, but states that currently he believes Asus’ hardware and live applications put it ahead of the Cupertino-based tech giant.

Still, Asus and Google Tango’s head start likely won’t be significant enough to completely outpace Apple. At the company’s recent developer conference, Apple’s senior vice president of software engineering, Craig Federighi, pointed out that once Apple’s version of AR hits the hundreds of millions of iOS devices on the market, it will automatically be the world’s largest augmented reality platform — and developers are already hard at work to capitalize on that new market.

That’s not to say that ARKit will be the world’s best augmented reality platform, however. Having initially released three years ago, Tango’s a much more mature platform, and with purpose-built hardware like the Asus ZenFone AR, there’s little doubt that users will experience some of the best mobile AR currently available on this device. 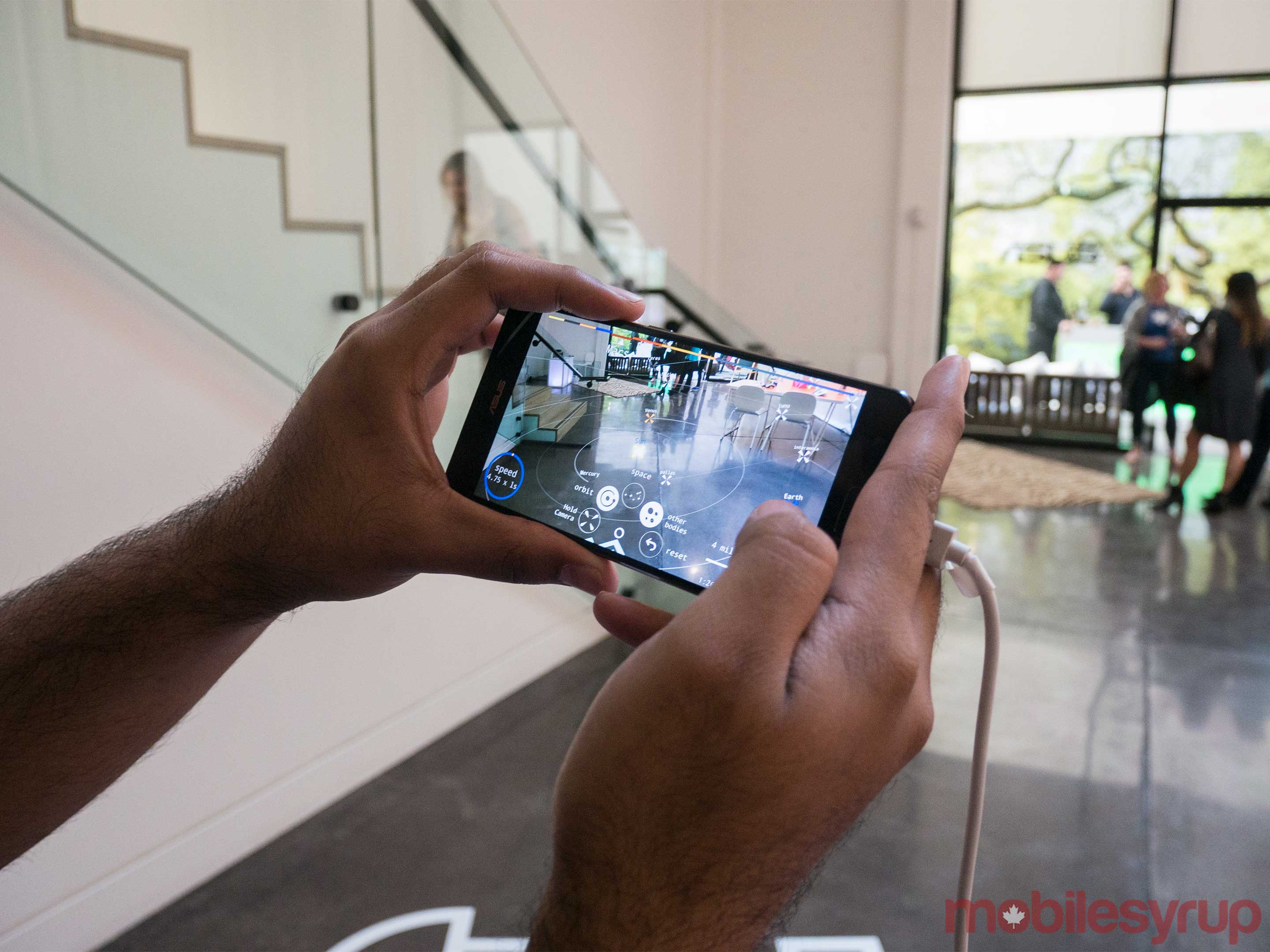 At the San Francisco event Asus invited press to try out a wide variety of these experiences, from checking out the solar system with Solar Simulator to entering a selfie-stick based classroom experience with Google Expeditions.

There were also shopping simulations that allowed me to test out a BMW and place furniture in a room, along with games and entertainment experiences that entailed stretching a virtual slingshot by walking backwards (Slingshot Island) or patting a dog in a hotdog costume (Holo).

All the experiences ran smoothly and generally only took a few seconds to load. The phones got pretty hot, but only after continuously running for an hour or so, which is to be expected.

What’s more, the ZenFone AR is the only device yet announced that is both Tango-enabled and supportive of Google Daydream, the company’s VR platform.

For mixed reality buffs, it’s an enticing offering — all wrapped up in what promises to be a well-specced upper mid-range phone.

Stay tuned to MobileSyrup for more information on Canadian availability and pricing, and let us know your thoughts on the device in the comments.