With Tecla-E, differently abled users get more access than ever to their devices 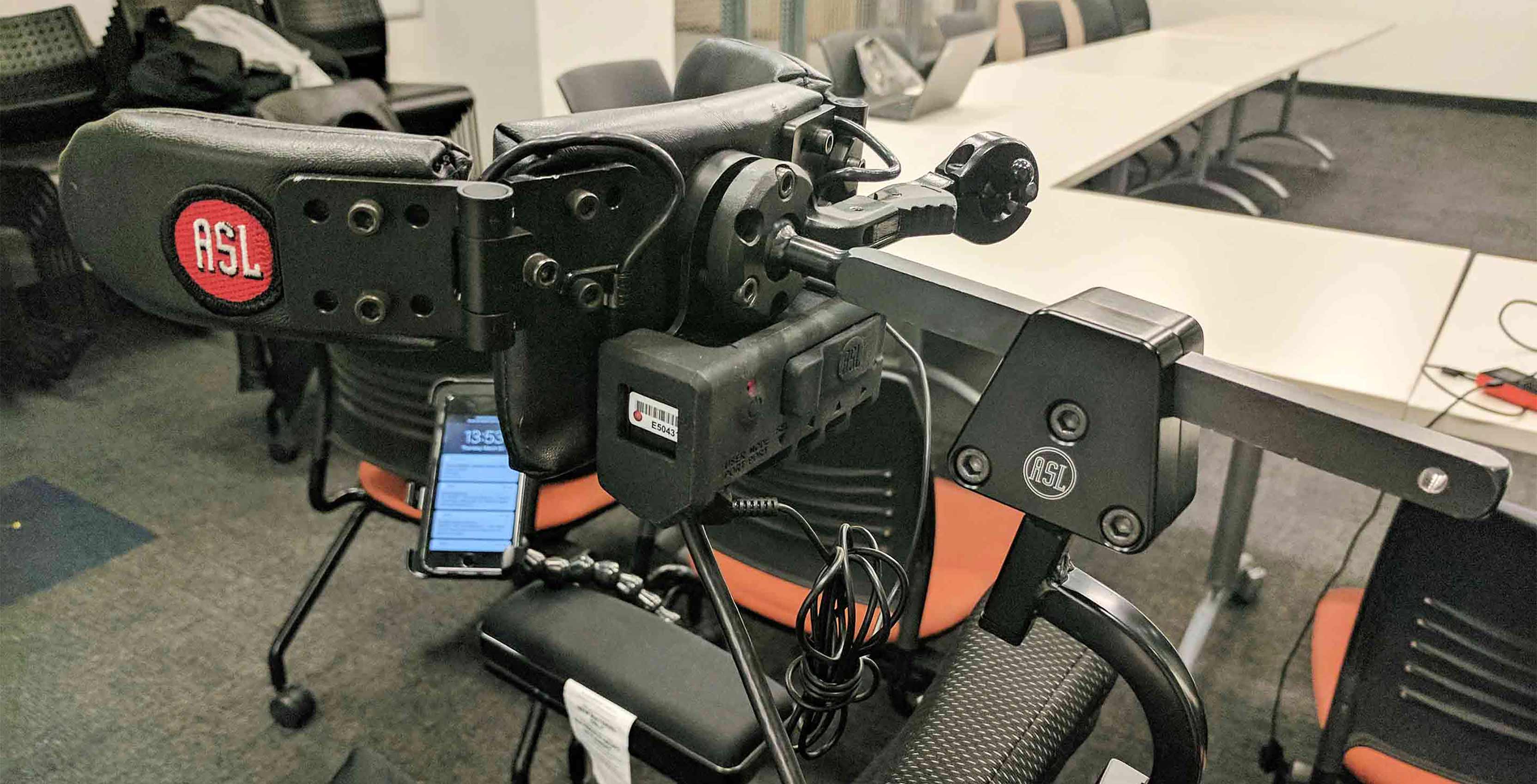 Touchscreens were invented for ease of use, and devices with touchscreens — like tablets — are often touted as the perfect entry into more advanced hardware for seniors and children. But any ease of use crumbles away when one essential element of use is lacking: the ability to touch and steadily manipulate the screen.

Without the ability to activate a touchscreen — an issue that many differently abled people face — a simple tablet may as well be a slab of stone for all the benefit it conveys the user.

This opens a clear window of opportunity for technological innovation: design a tool for those that can’t operate a touchscreen in a traditional manner, one that responds to the movements they can make — whether operating a joystick, clicking a button, blowing or sipping on a straw or moving their head or eyes. Unfortunately, no major consumer technology has stepped into the breach to create a comprehensive solution.

That’s why Tecla, an upstart company based out of Toronto, stepped in. 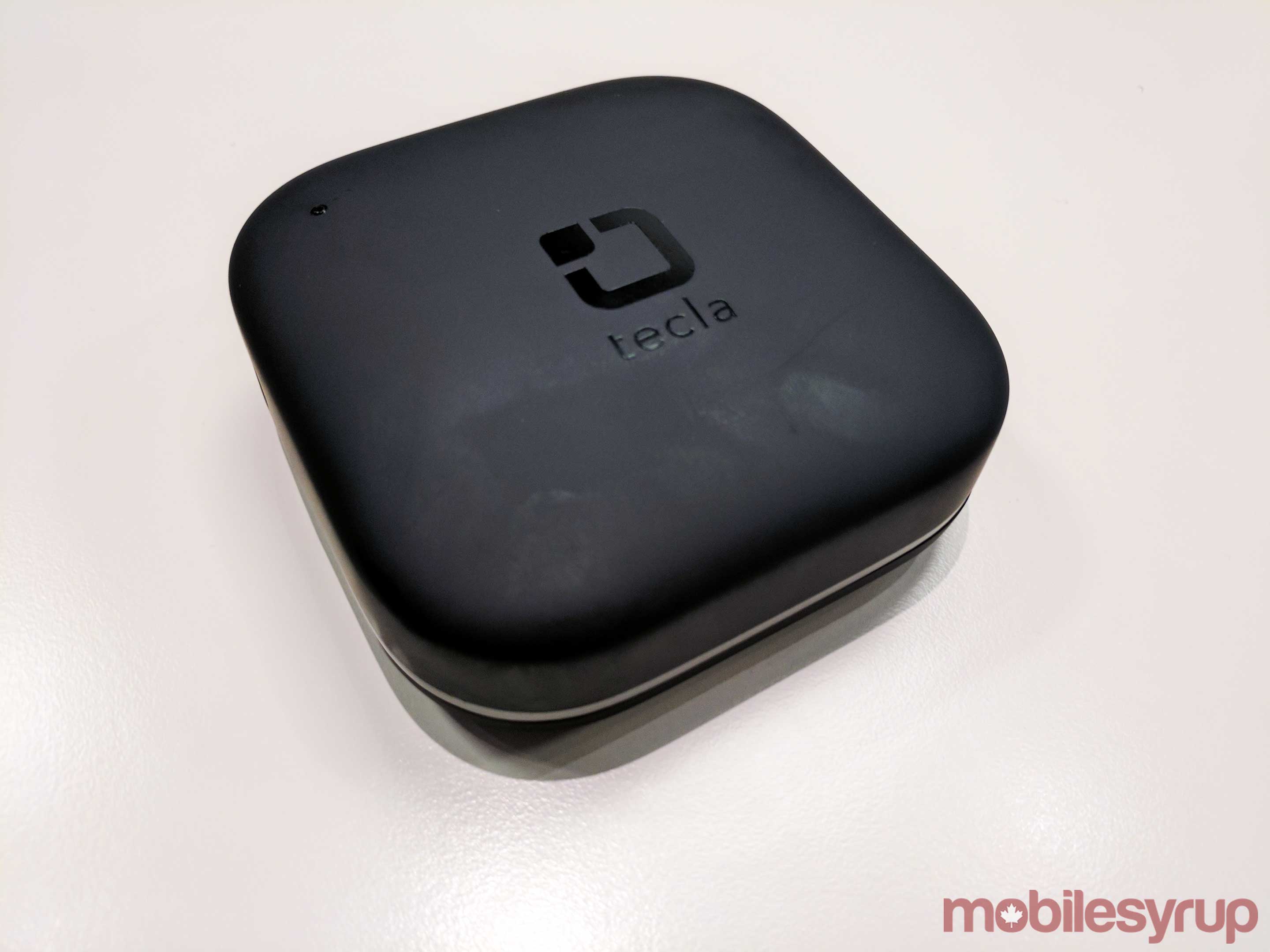 Mauricio Meza and co-founder Jorge Silva launched a beta version of the first Tecla device, the Tecla Shield, in 2011 to provide a tool that connects to both a user’s mobile device and their usage tool of choice, allowing the user to manipulate their phone with that chosen tool. For instance, a user can use a joystick to click through icons.

For apps or games that don’t have accessible icons, the user can click by placing first a rapidly moving vertical line and then a horizontal line to create a bulls-eye target.

As one of the few products on the market to provide a touchscreen solution for differently abled smartphone users, the Shield has a broad and engaged user base, but it also has its limitations — including an inability to connect with popular smart home devices or wireless head arrays and multiple device connections, among other things.

To improve upon its initial hardware offering, the company has now come out with a second generation of hardware that addresses those issues and brings with it several other additional enhancements. 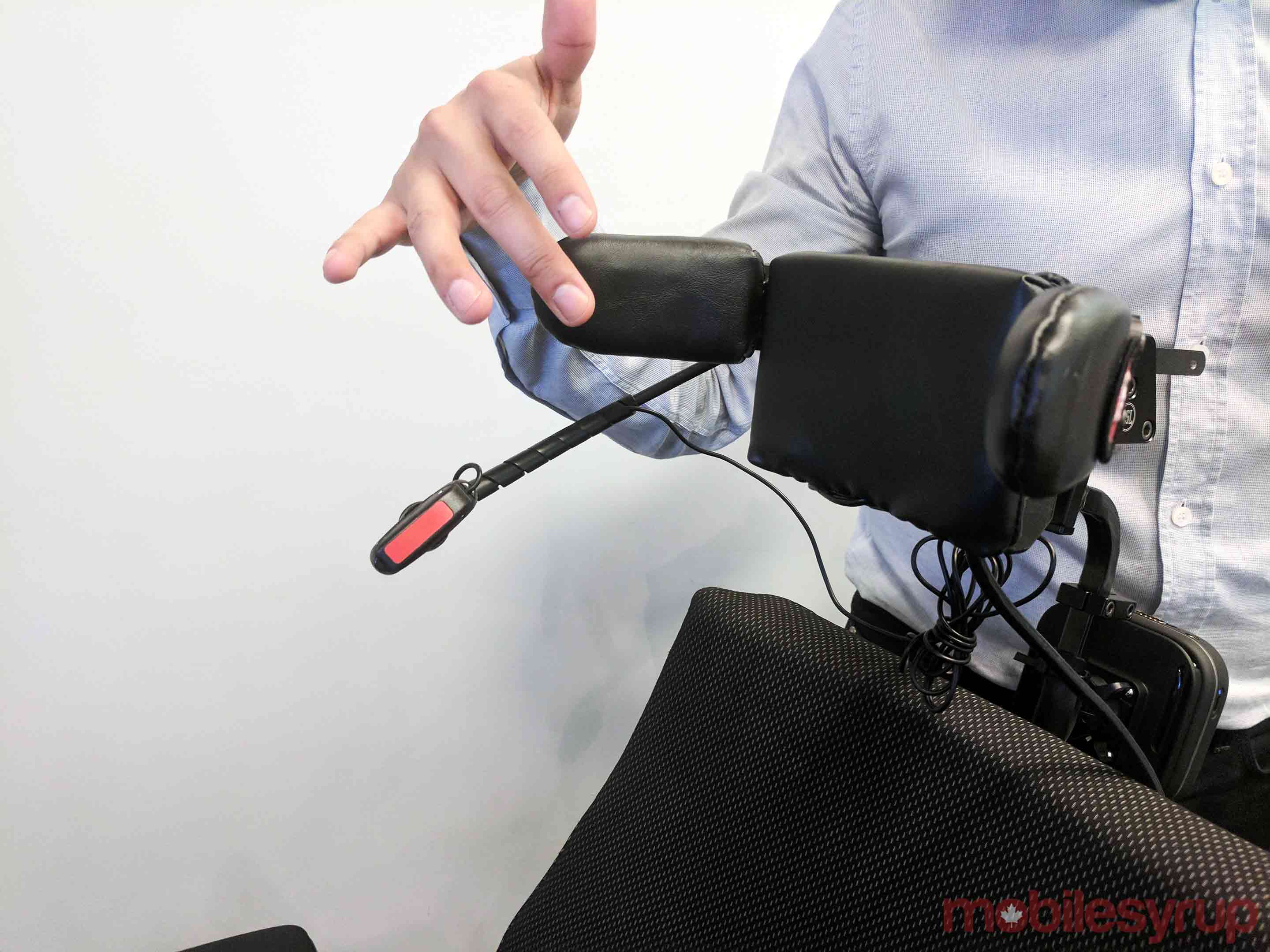 The Tecla-E is poised to go on pre-order soon for $399 USD (about $540 CAD) and once the device begins to ship in July, it’ll cost $499 USD (about $680 CAD). That’s an increase from Shield, which costs $475.73 CAD — but still considerably less than a traditional communication device like the kind used by Stephen Hawking, which can be many thousands of dollars.

The first improvement that Meza demonstrated to me about the Tecla-E is the fact that you can actually use the device itself to operate your technology.

“The entire device is now something you can activate,” said Meza, “For people who have arm movement, elbow movement or shoulder movement.”

It also looks different — now the device is black and understated, toned down from the multi-coloured Shield, though covers will be available for those who still want a bit of flash.

The Tecla-E also has Wi-Fi and 3G built-in, primarily to allow for connections to smart home devices like Philips light bulbs or Belkin WeMo switches, and it connects to up to eight devices — whereas the Shield was just a one-to-one tool.

This allows users to connect to their phone, tablet, computer, Apple TV and smart home devices all at once, enabling them to switch through the devices using the Tecla accessible app or directly through their input tool. 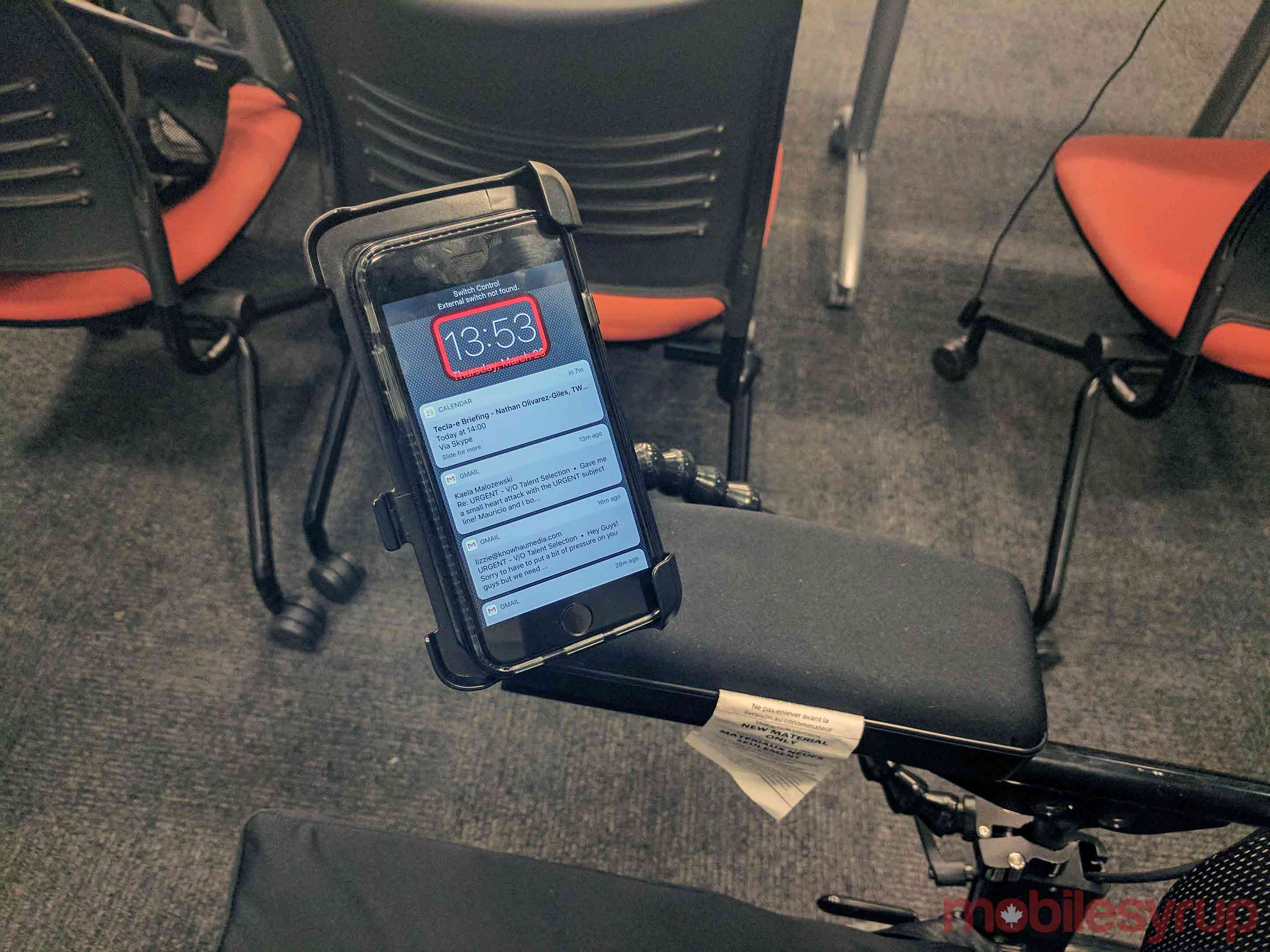 For Tecla’s first user ever, Carolyn Pioro, having multiple connections is a major improvement, since she uses smart home devices to run her household from her wheelchair.

“My cat only wants to drink from a fountain, so I can turn on the fountain,” said Pioro, “We’re both a bit precious that way. It suits our life and makes it easier.”

She says technology wasn’t as large part of her life before she became a wheelchair user, after a C4 spinal cord injury sustained in an accident on the flying trapeze during her time as a circus performer.

“[I wasn’t a big techie] until I needed to be when I became a wheelchair user and embraced it… I think I was at a better place than an older individual that would be at more of a learning curve, but that’s where I gained the most independence and freedom, was through technology, so it was good to embrace it.”

In addition to enabling connections with smart home devices, the Tecla-E’s 3G connection (supplied by a third party that focuses on IoT deployments) can also be used for monitoring. The device reports its location to a Tecla server where a monitor can see where the device is and information about the user’s surroundings, like temperature, motion and light conditions. Users can choose to share that information with others through the Tecla app.

The remote monitoring service will be available to users through a subscription service within the Tecla app, which Meza expects to debut “a couple months” after the hardware comes out. The company says the price for that subscription will be between $10 and $20 CAD.

Another new feature is the ability to connect wirelessly to a head array on a wheelchair, offering an additional input tool for the user, and Meza says the company is now working on Amazon Alexa integration and hopes to eventually support Google Assistant. 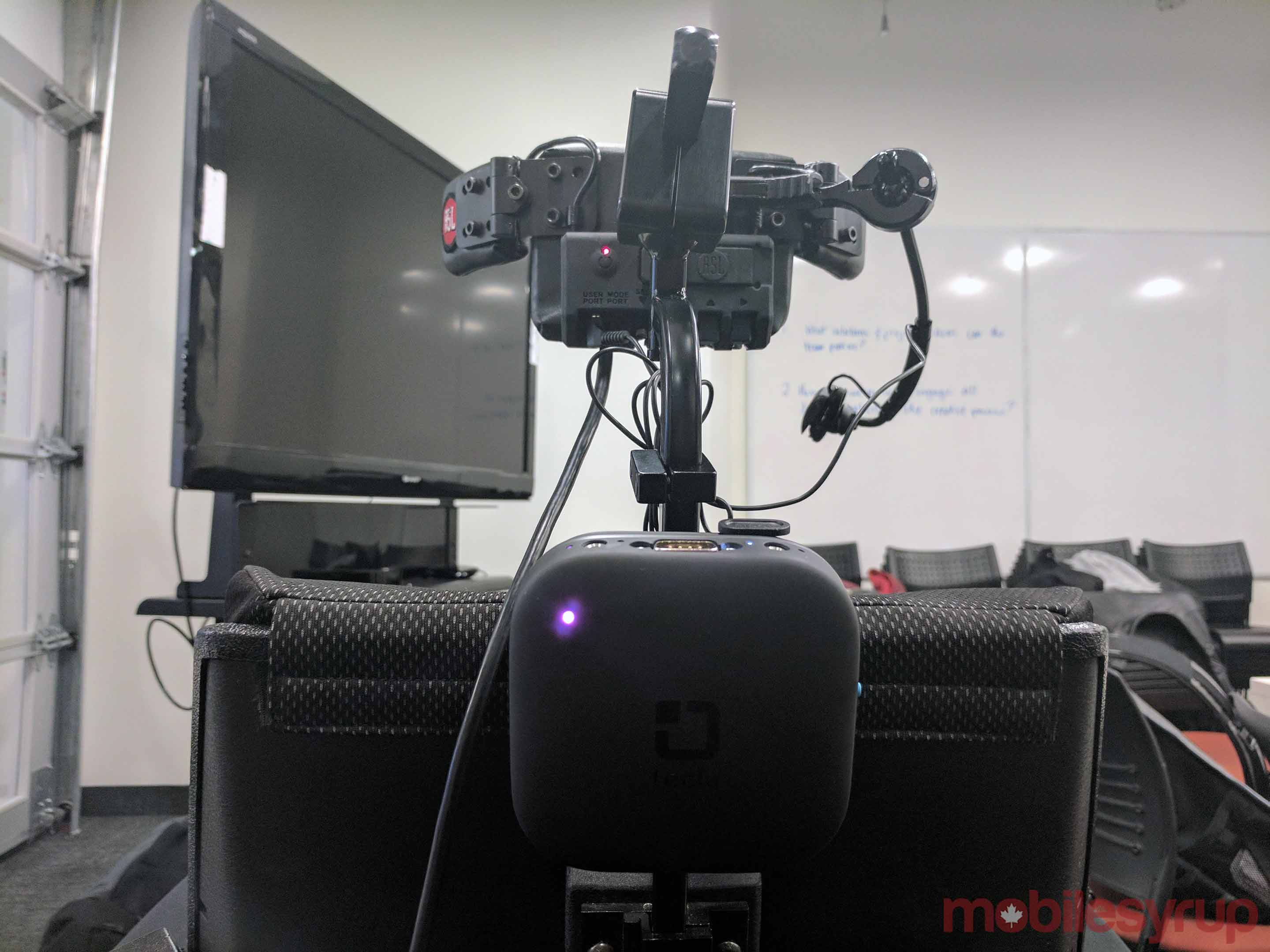 Most of the improvements to the device and app are the result of feedback from the company’s approximately 3,000 users and, in particular, a dozen highly engaged users like Pioro.

“On the medical end of things, I’m often not seen as the number one consumer or the advocate for my own decision making, but I’ve never felt that with the Tecla team,” says Pioro, noting that she believes the Tecla team is extremely receptive.

For Meza and his team, this feedback helps them improve Tecla and further the ultimate goal of allowing differently abled users the freedom to unlock the potential of their technology by not only eliminating the barrier of the touchscreen — but by creating bridges between all the users’ technologies, as well. Meza and Pioro both hope large companies and governments will do more in the future to support innovation and technology in the field, with Meza noting that, apart from Apple, most mobile manufacturers are still lagging behind in developing for accessibility.

“It’s a huge quality of life thing to have this technology and support,” says Pioro, “So I think it needs to be seen more as almost more essential to that quality of life. Not just — you can get around and you have some support to help you in the morning, but giving you ways to help you excel and be on the same playing field as anyone else.”