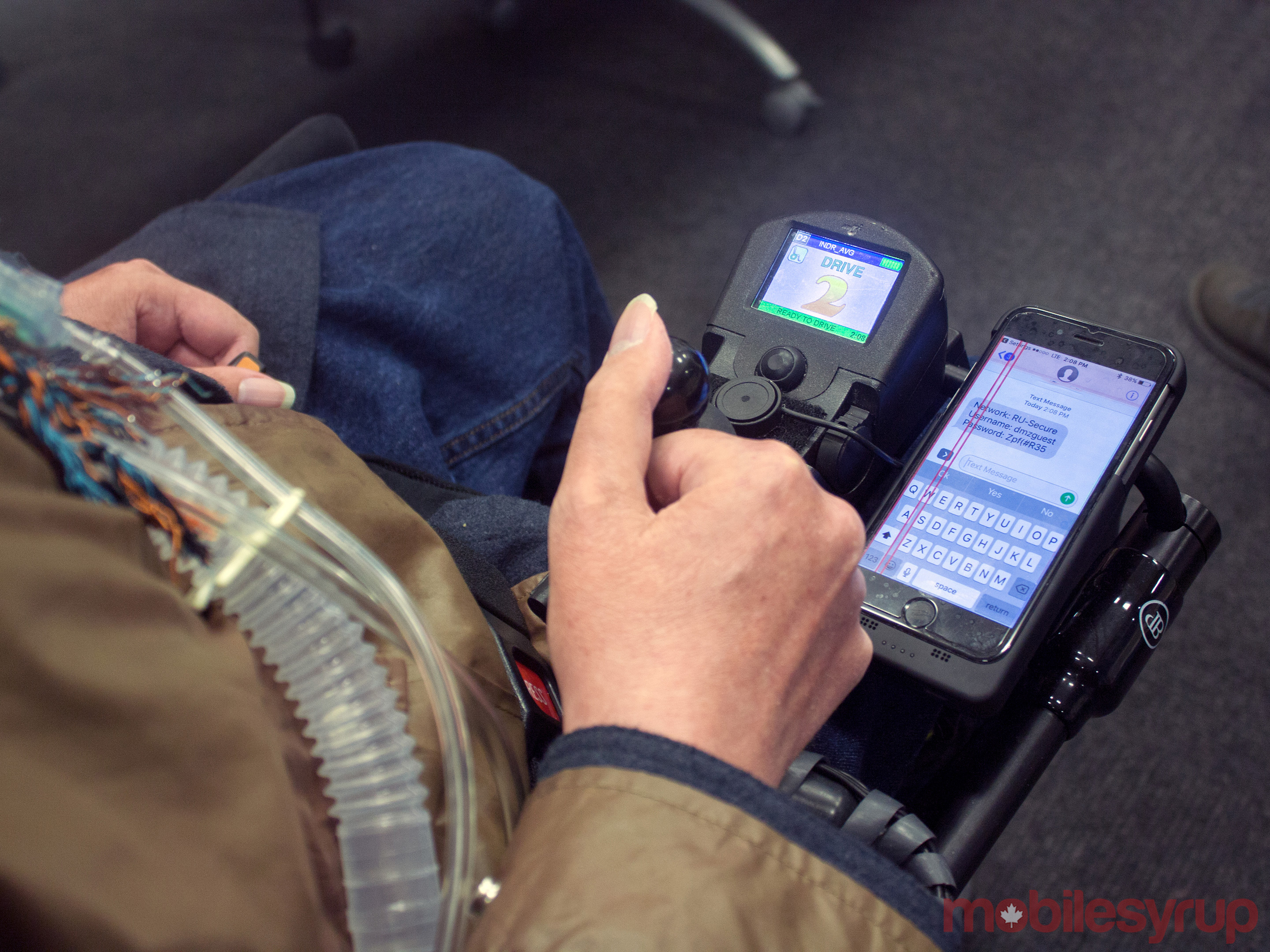 Can you remember the last time you went without your smartphone? Access to navigation tools, email, internet browsing and communication in all its various forms means mobile usage is starting to feel more like a necessary utility than the desirable luxury it once was.

This ubiquity makes it hard to believe that a significant demographic of the population routinely faces barriers to access due to a seemingly simple to overcome issue: touchscreen use. For many, including those whose physical range is limited by spinal cord injuries or diseases like muscular dystrophy, touchscreens make modern smartphones all but inaccessible.

That’s why Mauricio Meza set out to make a device that would provide an interface between smartphones and a differently abled user’s tool of choice — whether it be the joystick on a wheelchair or a set of glasses that can detect blinks.

Meza and co-founder Jorge Silva launched a beta version of the device, dubbed Tecla, in 2011. In his previous position at the Toronto Rehabilitation Institute (Canada’s largest rehabilitation hospital) Meza had worked in a department that would help differently abled people access technology. At the time, the focus was mainly computers but just as he decided to leave his position and return to academia, the iPhone started gaining popularity. Many patients asked whether there was any way they could use the device. 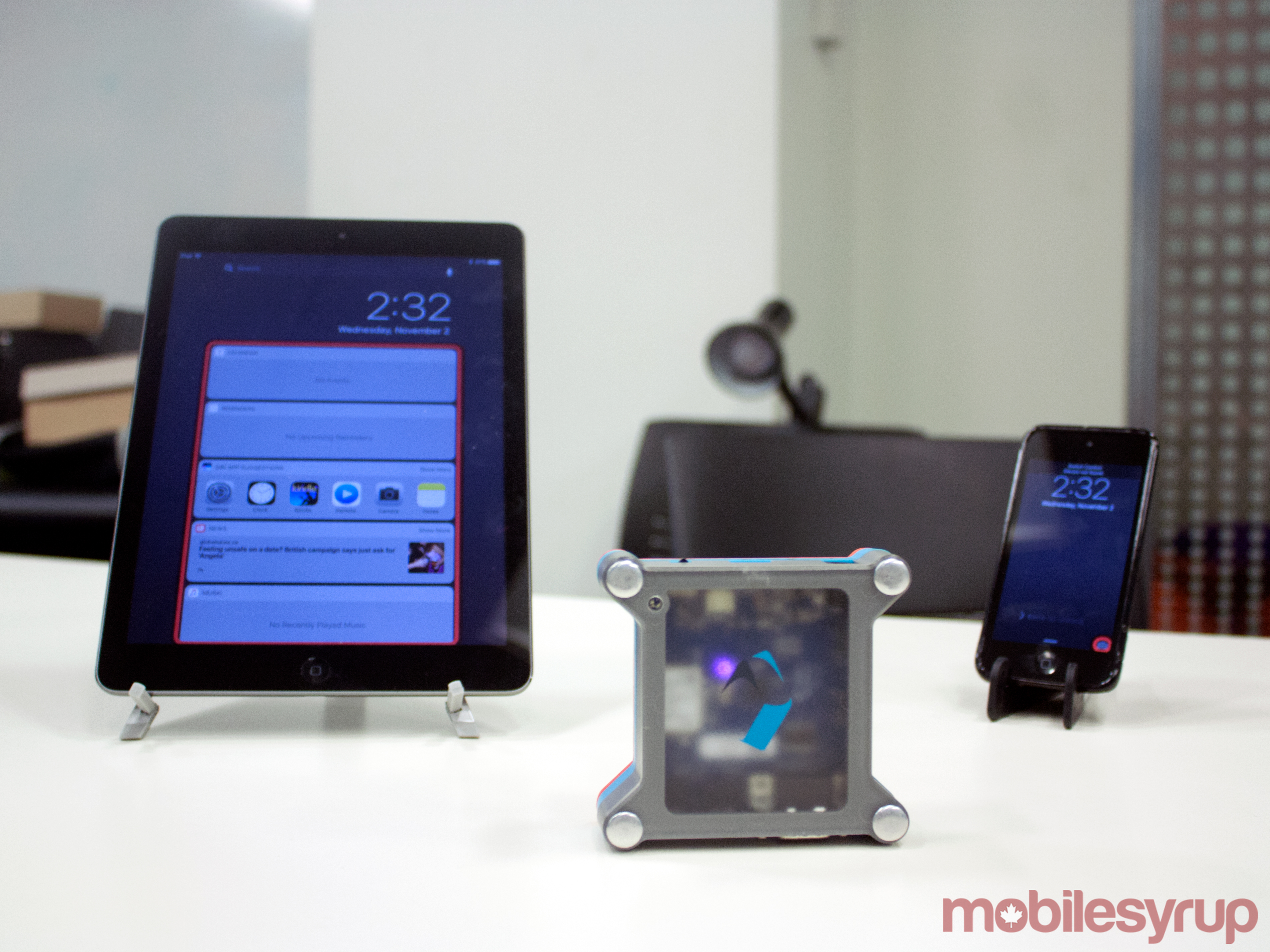 Meza and his co-founder saw an opportunity for innovation and they weren’t alone, though Meza says some of the ideas he heard floating around didn’t seem well thought out.

“We heard at the time people saying ‘Oh, I’m going to create a robotic arm with a stylus that you can use to control the iPhone,’ and I thought, that seems like overkill.”

Instead, what the startup created was a small, lightweight piece of hardware that connects to both a user’s mobile device and their usage tool of choice. Neil Mercer, for instance, uses a small toggle device that he holds in his left hand to operate his iPhone, which is mounted on his wheelchair. Mercer has limited use of his hands due to living with Becker muscular dystrophy for 40 years and often has to pause while speaking, negating the ability to use voice commands.

To operate the smartphone, Mercer can click through icons with this switch, and for those apps or games that don’t have accessible icons, the Tecla offers the ability to place general coordinates — sort of like a game of battleships — by popping up a feature that shows a vertical line moving rapidly back and forth across the screen. At any point he can tap to stop the line, and then a horizontal line pops up, traveling back and forth in the same manner. 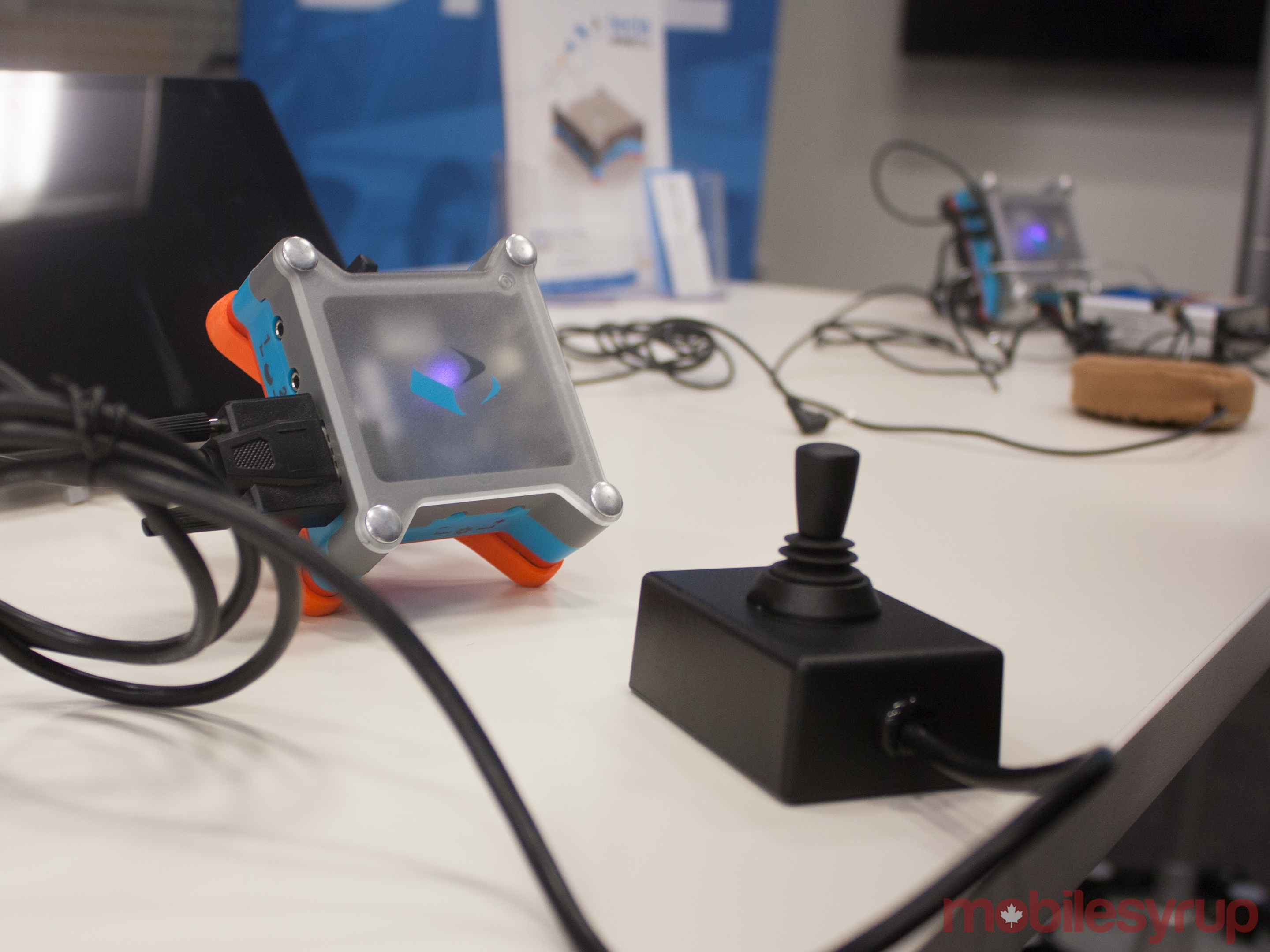 He then taps to stop the second line, and the device clicks where those two lines meet. After four years using Tecla, Mercer has become very good at this. Watching him tap out a message, it’s astounding to see that it’s not much slower than my own typing. It’s a brilliant system, and one that Mercer says enhances his daily life immensely.

“I use it all the time. I have it on 24-hours. Without I’d just feel totally out of the loop,” says Mercer.

What makes the Tecla so important to Mercer is the multifaceted access it gives him to a number of different tools. Even for people with the full ability to use touchscreens, smartphones have become our digital homes because they provide so much functionality packed into one small rectangle – from increasingly high-quality cameras to e-reading apps.

For those who are differently abled, that fact is only more pronounced. An accessible smartphone means there’s no need to buy an expensive accessible camera e-reader, GPS and remote amongst countless other devices. Whereas a Tecla kit — including mount, device and accessibility tool — will cost about $500 (often offset by government programs or mandates), a traditional communication device like the kind Stephen Hawking uses can be between $8,000 and $10,000, estimates Meza.

That’s not to mention the fact that smartphones also tend to be of higher quality than dedicated devices. 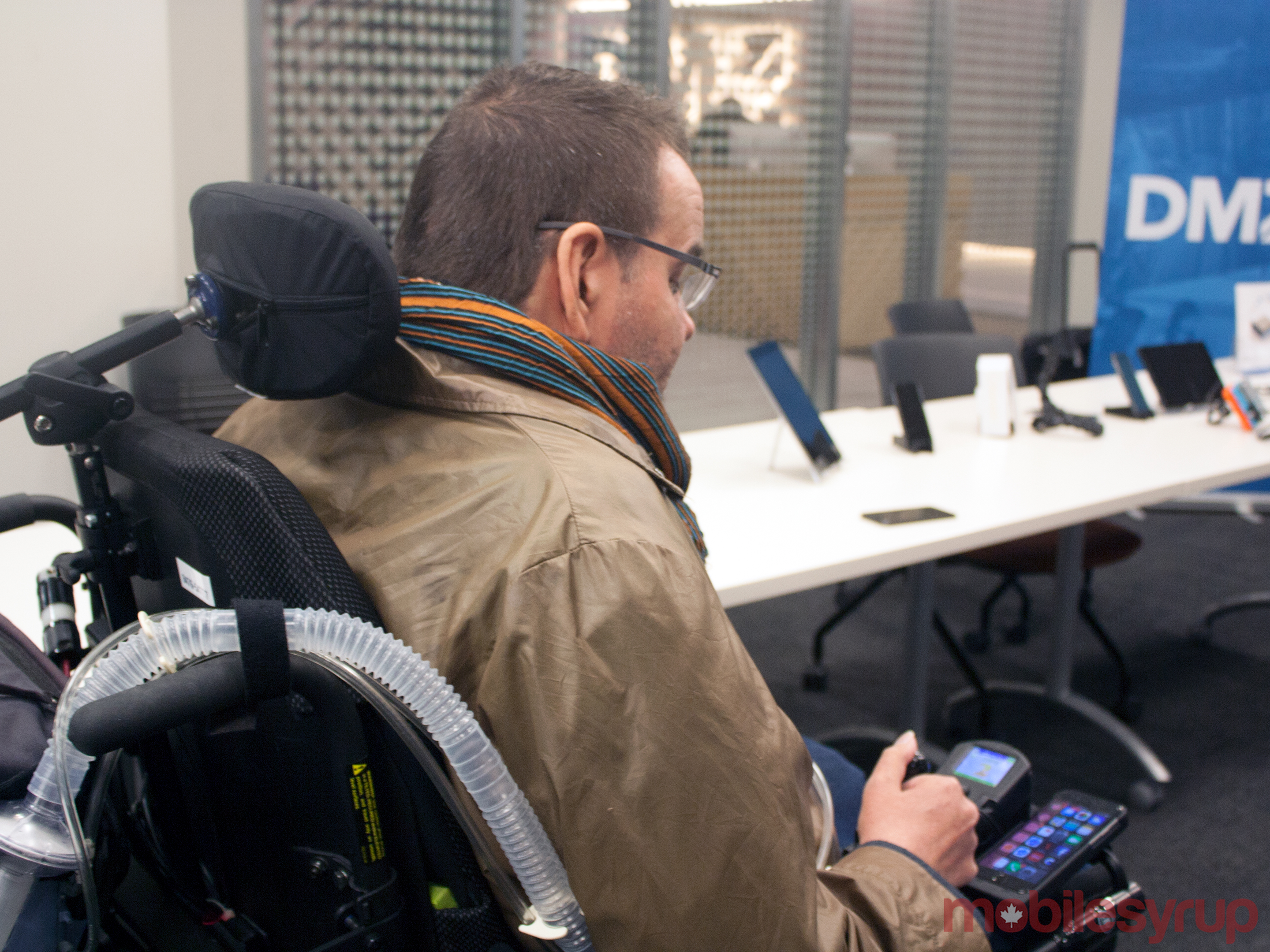 “Those devices, their failure rate is something like 50 percent of devices will fail in the first three months, it was that bad,” says Meza, “But an iPad fails I think one in ten thousand. So when you have access to that kind of technology it’s a big difference.”

While the Tecla may sound ideal, it’s important to note that it’s not available for all smartphones — in fact there are only two suggested brand options: Apple and Google (the Nexus 6P, specifically). This is because many smartphone makers are lagging when it comes to offering an acceptable level of accessibility, says Meza.

“In the U.S., there’s new accessibility legislation from 2010 called the 21st Century Communications and Video Accessibility Act and that basically says that any device that connects to the internet needs to be accessible. That’s the mandate. But it’s not there yet. We’re waiting for someone to sue the companies, because that’s when it’s going to get defined what accessible means. Right now it’s very open.”

Meza notes Kindle, Samsung and LG devices are amongst the many popular products that are not accessible enough to work with Tecla. He says he believes the issue is mainly lack of interest or dedication to the issue on the part of manufacturers. They may build an initial accessibility framework, but when updates are made they forget to build accessibility back into the new features.

“It’s not hard, what needs to be done,” says Meza, “They just don’t have an incentive so it’s going to be a lawsuit at some point.” 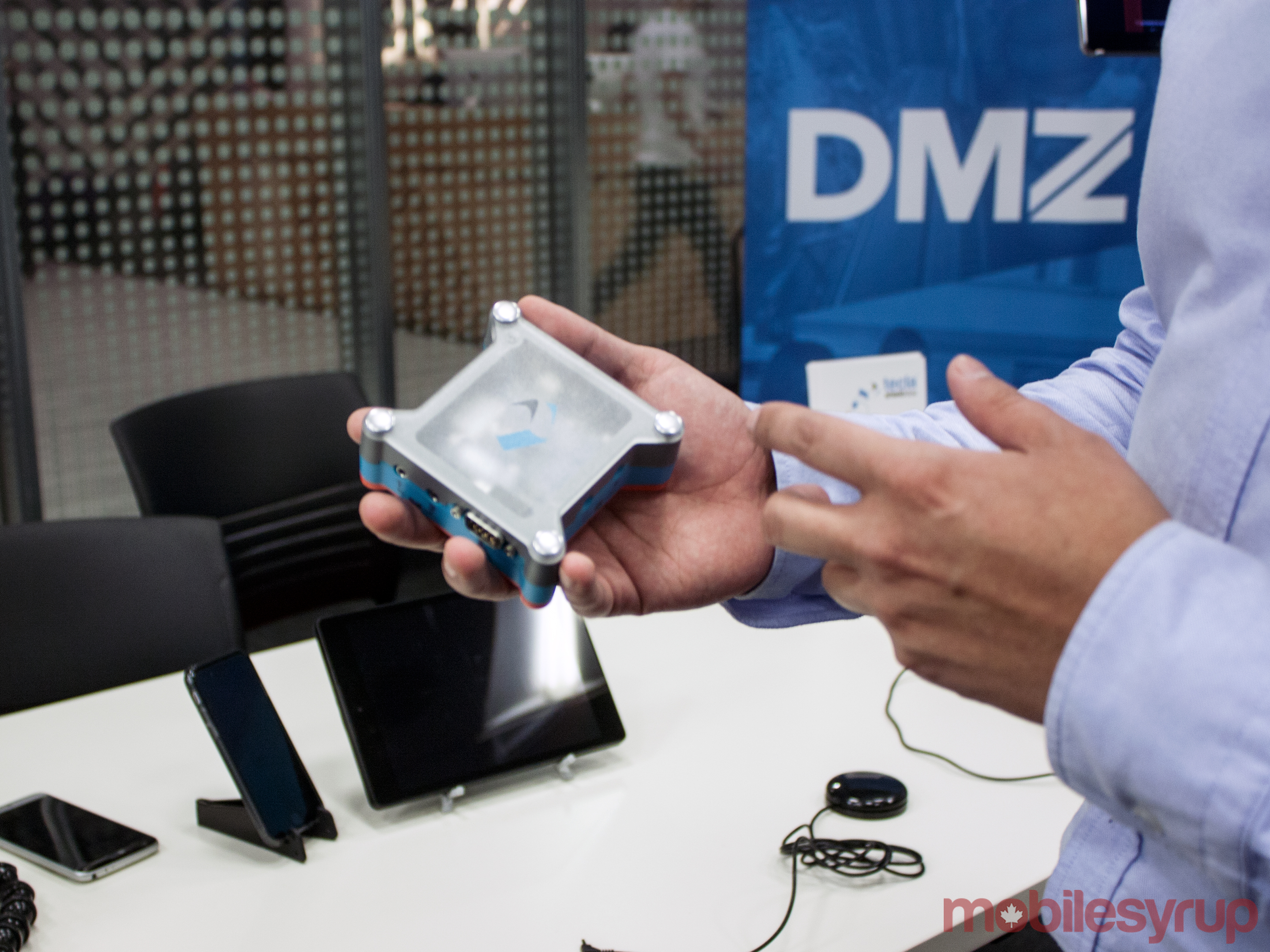 Sometimes one litigious individual is all it takes to kickstart change. That was all it took to get Rogers interested in helping Tecla test its device in the earlier phases, relates Meza.

The Canadian Radio-television and Telecommunications Commission (CRTC) has mandated that all carriers need to have at least on device for each type of disability. After being turned away from the carrier empty-handed, a differently abled customer lodged a complaint with the telco regulator, says Meza. Conveniently, this was right around the same time Tecla floated the idea of partnering with Rogers for testing, creating an incentive for the carrier to sponsor testing for the startup, so that it would help the individual who had lodged the complaint in return.

The CRTC’s mandate is also one of the driving factors behind Tecla’s current partnership with Bell, says Meza. The partnership subsidizes the cost of Tecla hardware, covering most of its so the user only has to pay $200 for the device and mount. The company is hoping to partner with more telecoms — both in Canada and internationally — in the future.

That would be good news for those who are differently abled in Canada, as Meza says that most telecoms are not yet compliant with the mandate. 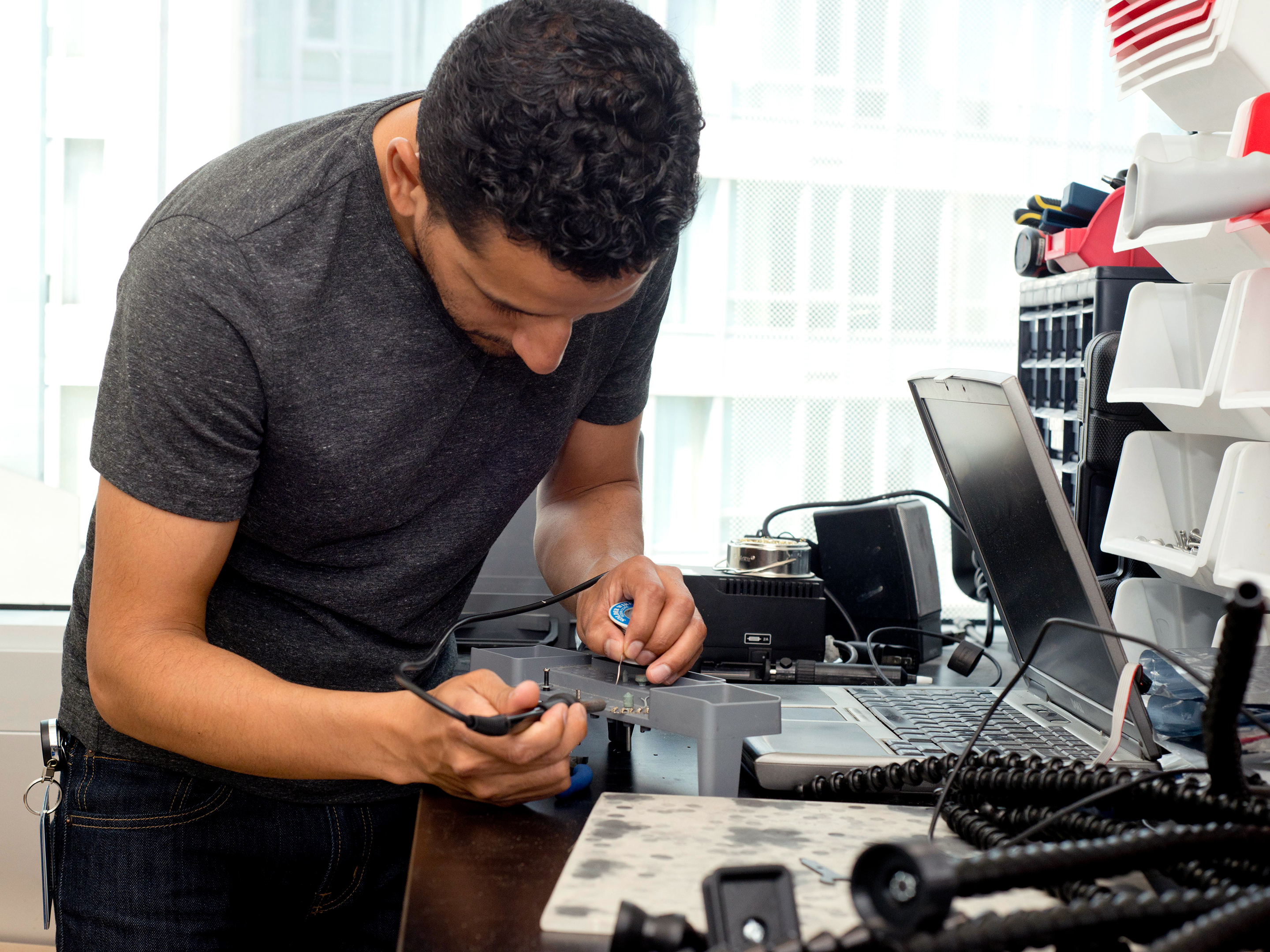 Not only that, but in such a saturated mobile market, it would be a wise move for telecoms and OEMs alike.

“Pretty much everyone that can have a cellphone right now, kind of has a cellphone so where are you going to find new customers? There are half a million potential customers that they could have,” says Meza.

Costumers that otherwise might remain voiceless. When I asked Mercer what his options were before Tecla, he replied: “Basically nothing. I used to have a phone before smartphones, but it required so much effort for me to push the buttons it wasn’t really worth it.”

Now with Tecla, the technology allows him to pursue photography, a long-time interest.

“I have a Go Pro camera and I can access it through this, so that’s pretty cool. When I was younger I was really into photography, now it’s hard because I can’t really hold a camera, so I like doing that.”

Ultimately, that’s the selling point of the Tecla. It’s not a unique dedicated accessibility tool with unheard of functionalities. It’s a tool that gives differently abled users access to the mobile world — a world that has the potential to put everyone on equal ground.