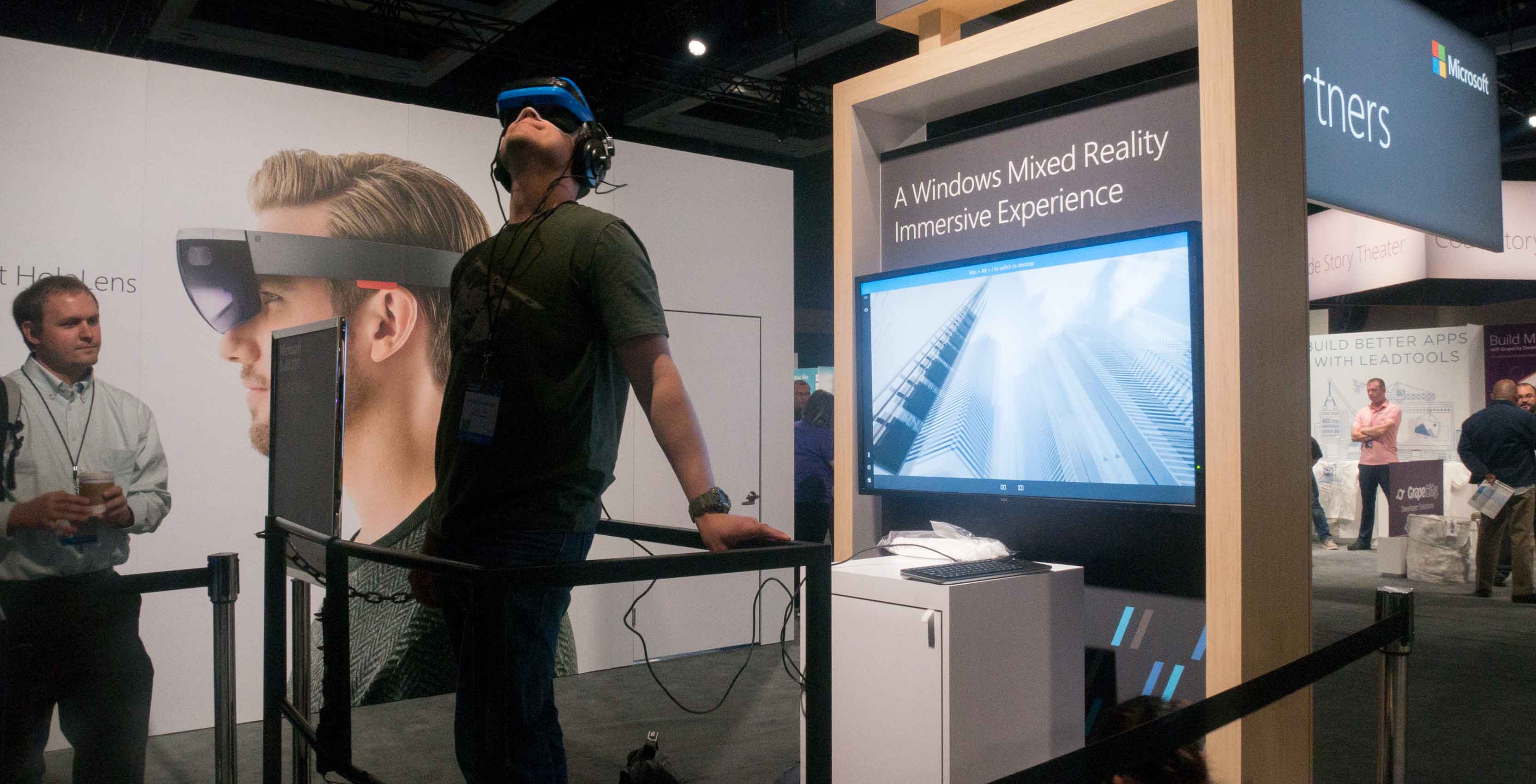 At the 2017 Build developer conference, Microsoft announced pre-order availability for two headsets that it hopes will blaze the path into a new era of ‘mixed reality’ — a form of tech that merges the real and virtual worlds in a manner that lies on the spectrum between augmented and virtual reality.

The two devices are both made by hardware partners. There’s the Acer Windows Mixed Reality headset and an HP-produced headset, both available for pre-order now and delivering in late summer. 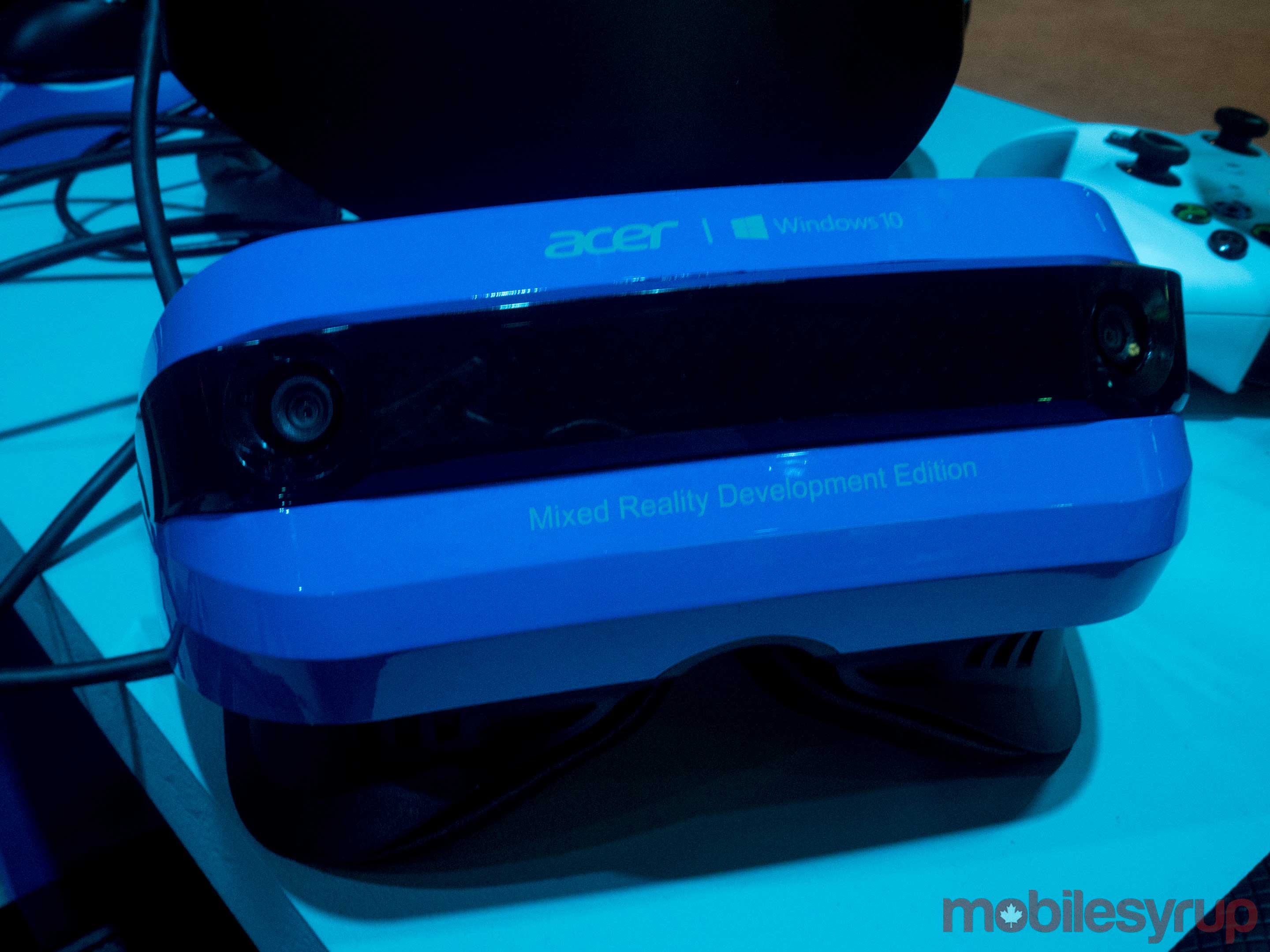 The Acer headset comes in at an impressive $399 CAD and the HP at $449 CAD — comparing well to more premium competitors like the $1,149 CAD HTC Vive, $679 CAD Oculus Rift and $550 CAD PlayStation VR headset (pricing for all sans controllers).

Headsets from Dell and Lenovo are also coming, as are the newly-announced mixed reality motion controllers, which may arrive by the 2017 holiday season and will be available as part of a bundle with the Acer headset for $399 USD (about $547 CAD).

During the conference, Microsoft gave press and attendants the chance to play with the forthcoming Acer device in a variety of demonstrations, allowing me to try out the developer’s model of the new mixed reality device and see how it compares to some of the leading VR and AR devices currently available.

The headset, which so far seems to be available only in a cobalt blue, skews more to the virtual reality side of the spectrum, but offers a few features that open it up to the real world a bit more than average.

For one, the headset portion flips up visor-style so that you can view reality without taking off the device. The company has also shown demos where the headsets map real space or put virtual objects on the real world through pass-through video, though I didn’t get the chance to try out a more augmented reality-focused demo. 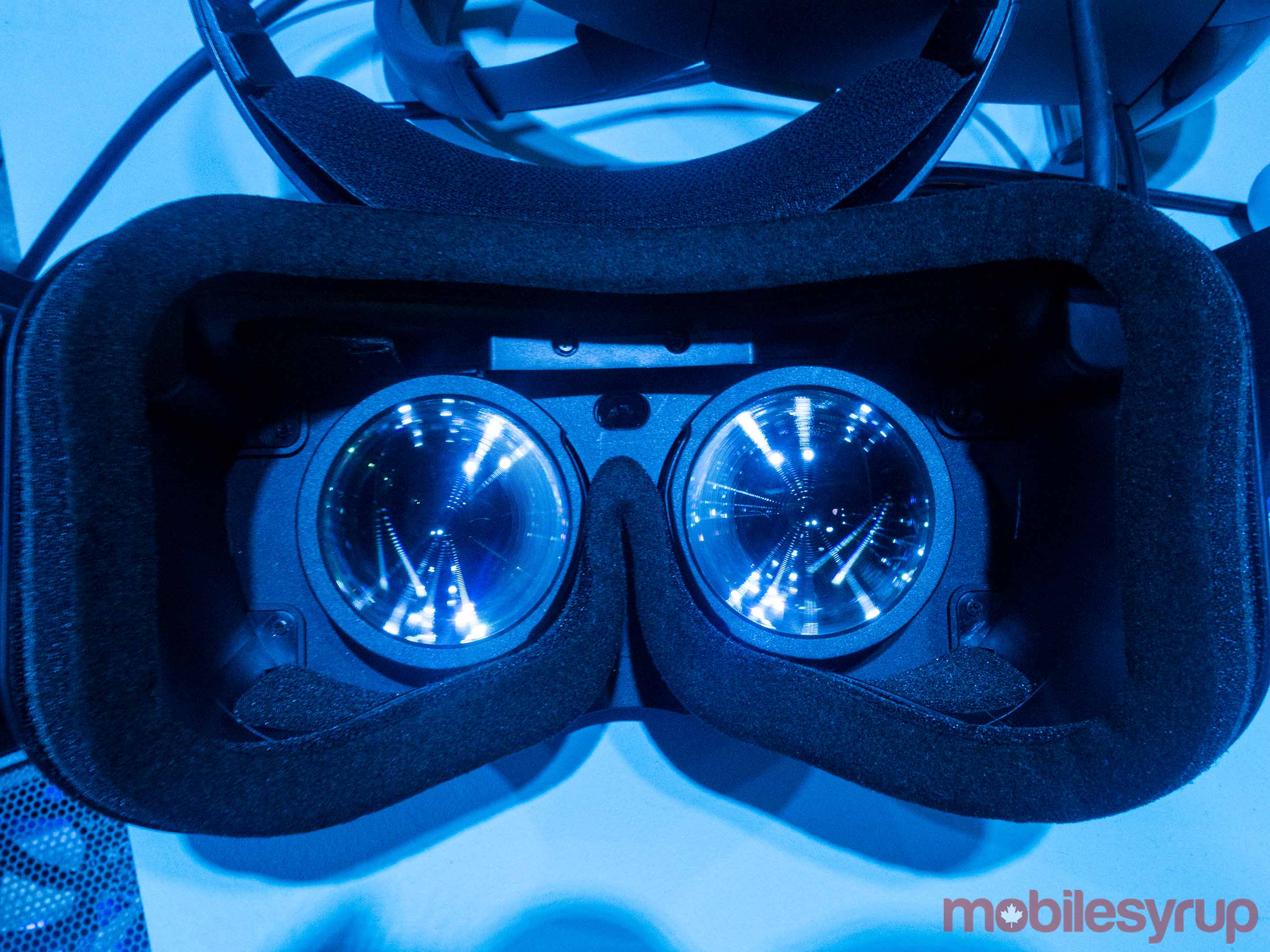 In my demonstration, Acer Mixed Reality headset users sat or stood by their gaming PCs exploring a VR island and completing puzzles, while Hololens users watched the island from above (it showed up as a hologram on a central coffee table), giving hints to the players.

The headset is light in the realm of PC VR headsets at 350g — the Vive and Rift are both about 470 grams — though still not quite light and comfortable enough for me to consider wearing it in visor mode for any extended length of time without preferring to take it off. The display itself features two 2.89-inch high-resolution liquid crystal displays at 1440 x 1440 pixels per eye and has a native refresh rate of up to 90Hz. 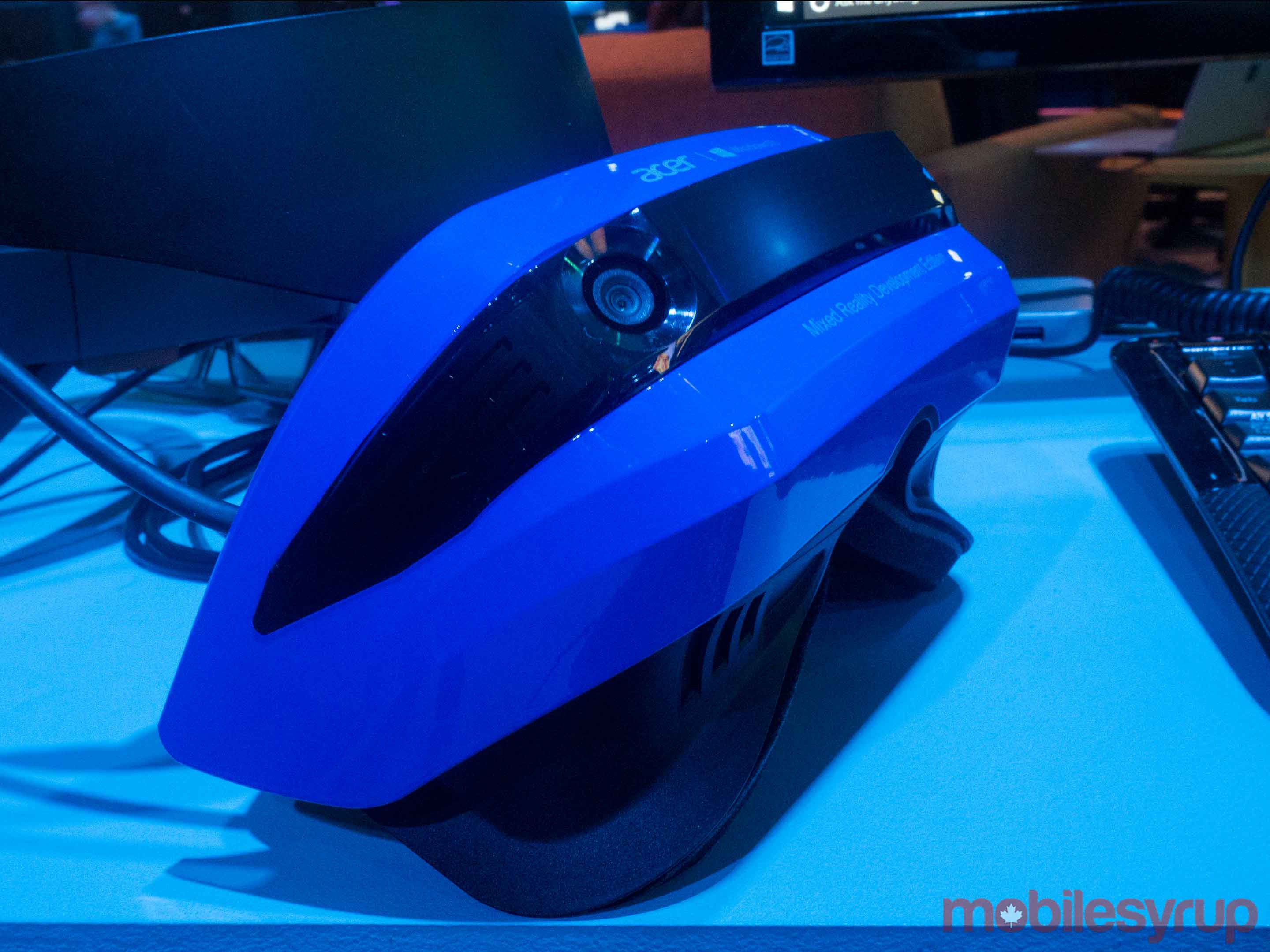 It’s bright and crisp, but not immune to the ‘screen-door’ effect (SDE). I was able to make out the fine lines between pixels, though it wasn’t hugely bothersome, and it should be noted that the Acer headset’s specs still compare favourably to other high-end VR headsets. 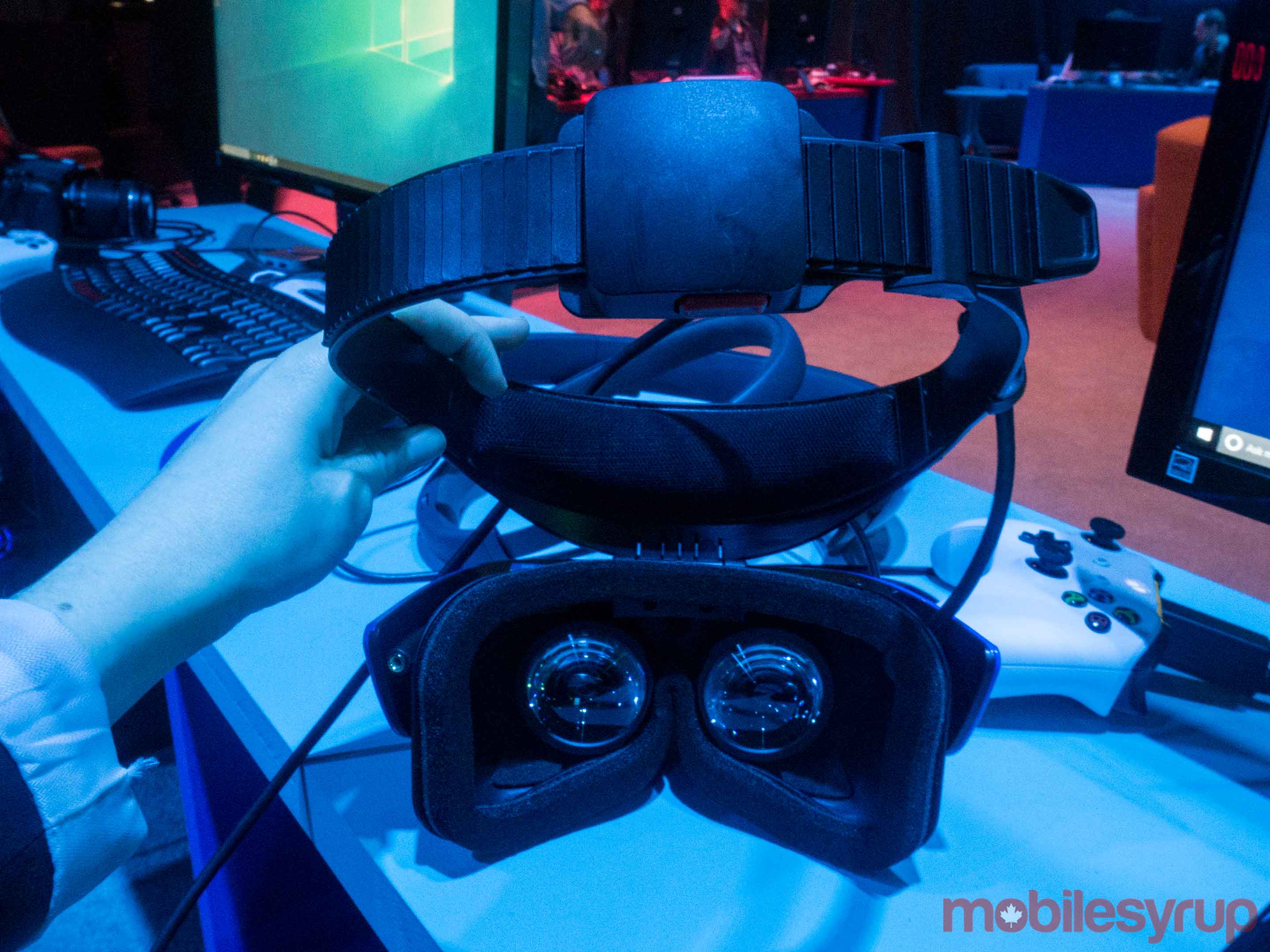 The experience was responsive and the gaze tracking responsive, but did lead to some nausea after 20 or so minutes in the headset.

The headset was paired with an Xbox controller, which worked well enough — but the experience will no doubt be enhanced by the inside-out tracking controllers, which boast precise and responsive of movement in your field of view and six-degrees-of-freedom.

As for ports, the headset features audio out and microphone support through a 3.5mm jack and a single cable with HDMI 2.0 and USB 3.0 for display and data connectivity. 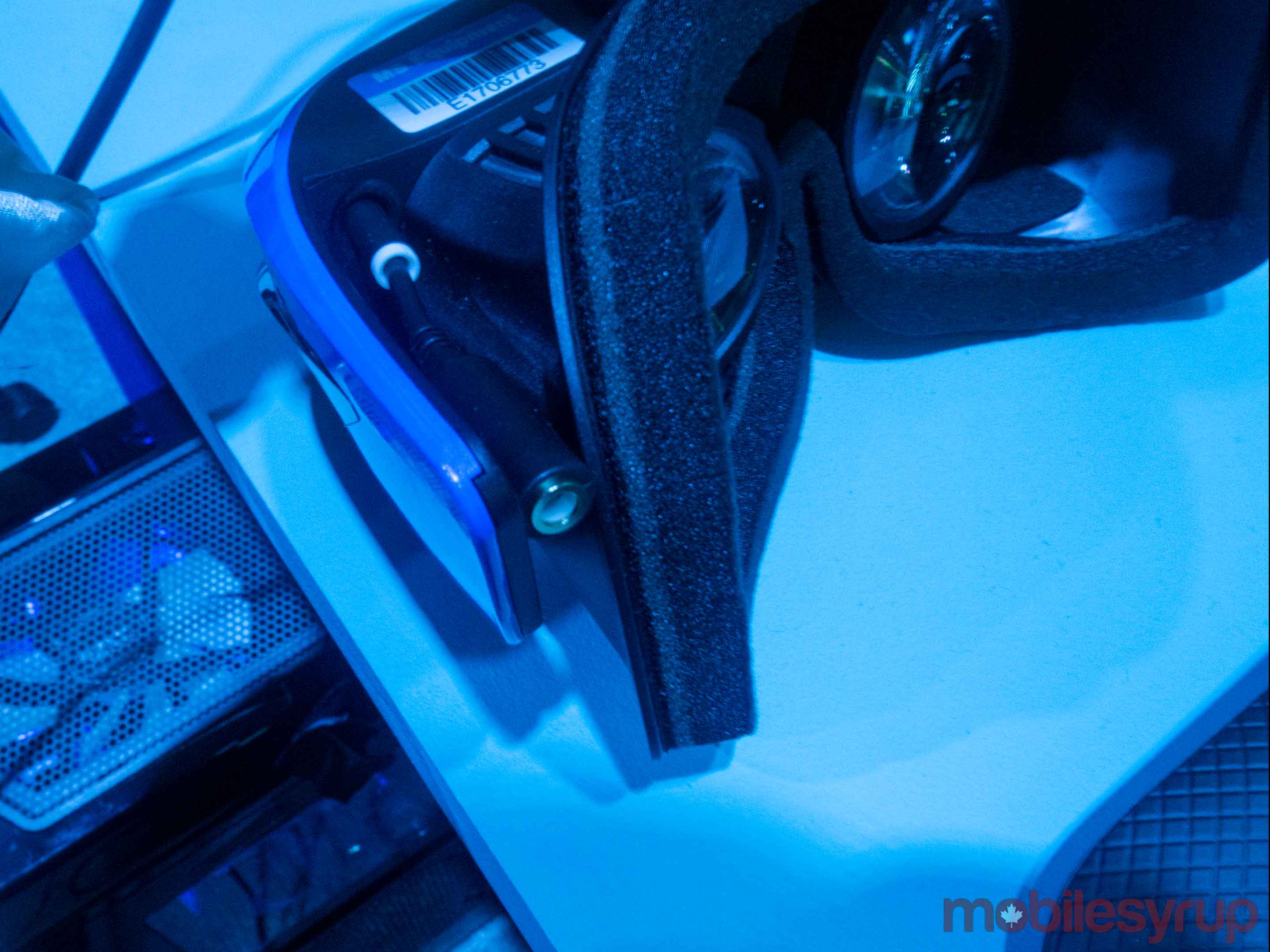 Also important are the requirements for an accompanying PC, which can sometimes be a barrier to consumers interested in VR if exhaustive. The company published system recommendations for app developers here which suggest an Intel Desktop i7 processor (6+ Core) or AMD Ryzen 7 1700 processor (8-Core, 16 threads), 16GB of RAM or greater and, for graphics processing, the NVIDIA GTX 980 or 1060, AMD Radeon RX 480 (8GB) equivalent or greater, with DX12 and WDDM 2.2 capability.

Additionally, Microsoft shared consumer PC requirements (shown below), none of which are too taxing. 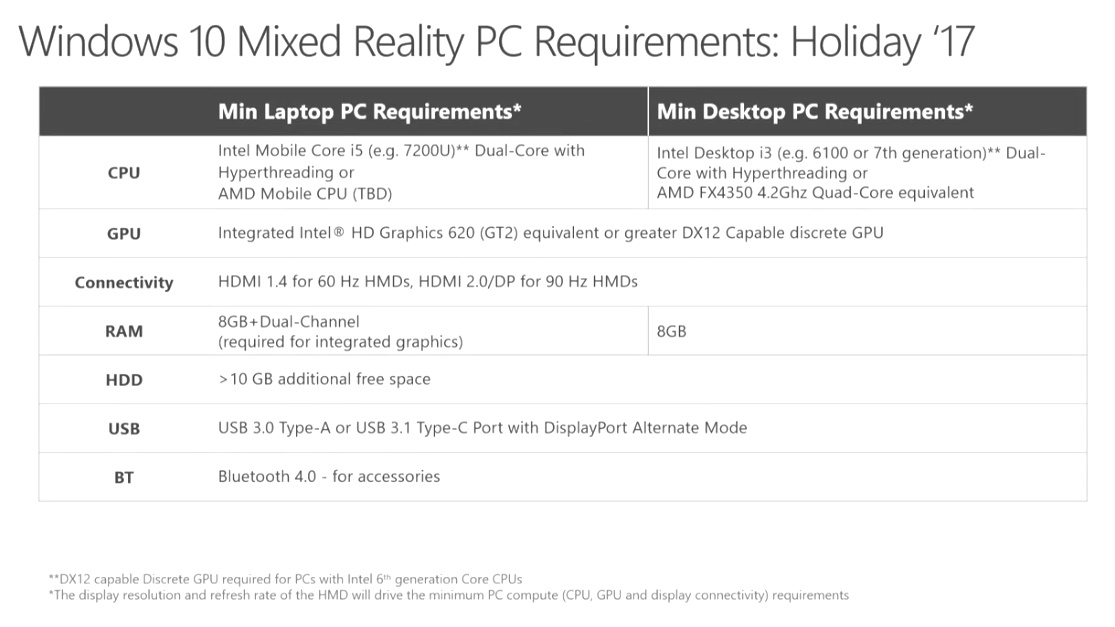 With this versatility and its price point, the Acer Mixed Reality headset could be poised to become a popular 2017 holiday gift, especially if developer uptake is robust.

From my brief time with it, I could easily see the new entrant becoming a force to be reckoned with in the VR — or, as Microsoft would have it, MR — scene.