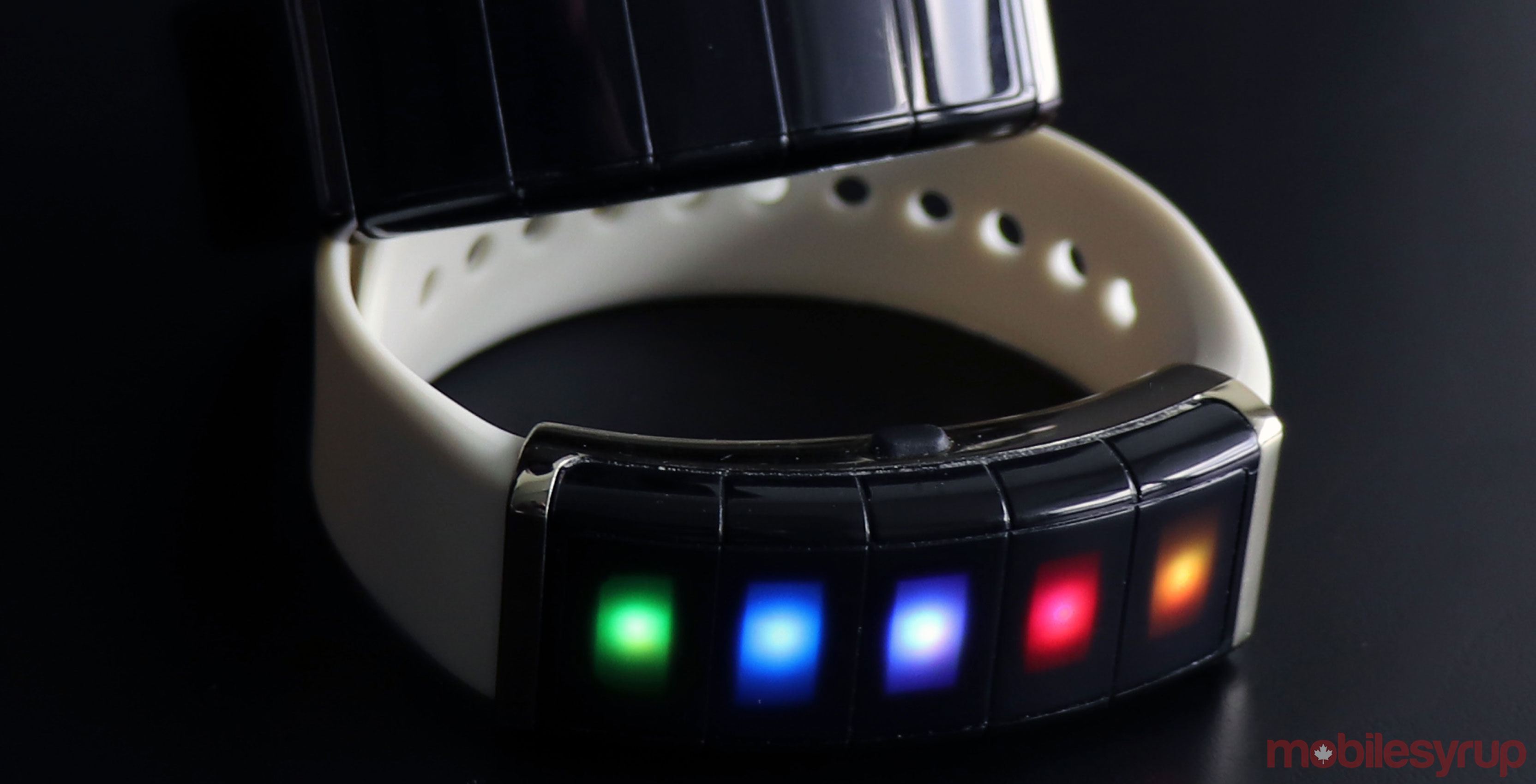 Wearables for the wrist generally fall under fitness or fashion with little in the way of modularity or expandability. The Nex Evolution is unlikely to turn heads for how it looks, but rather for what it can do.

Originally a crowdfunded device from Montreal-based Mighty Cast, this band carries a very different premise than the category’s standard fare. Even when fashion is a strong consideration for a fitness band or smartwatch, activity tracking is the primary function.

The Nex Evolution almost treats that as an afterthought. Instead, the idea here is to interface directly with apps and smart devices to control them through “hacks.” It wouldn’t be a stretch to consider this a hardware extension of IFTTT because it utilizes it, and its influence otherwise permeates the device.

That it uses colour to communicate gives it a retro feel, and the level of customization promises more to come. The question is who will find it all compelling enough to ditch their fitness band? 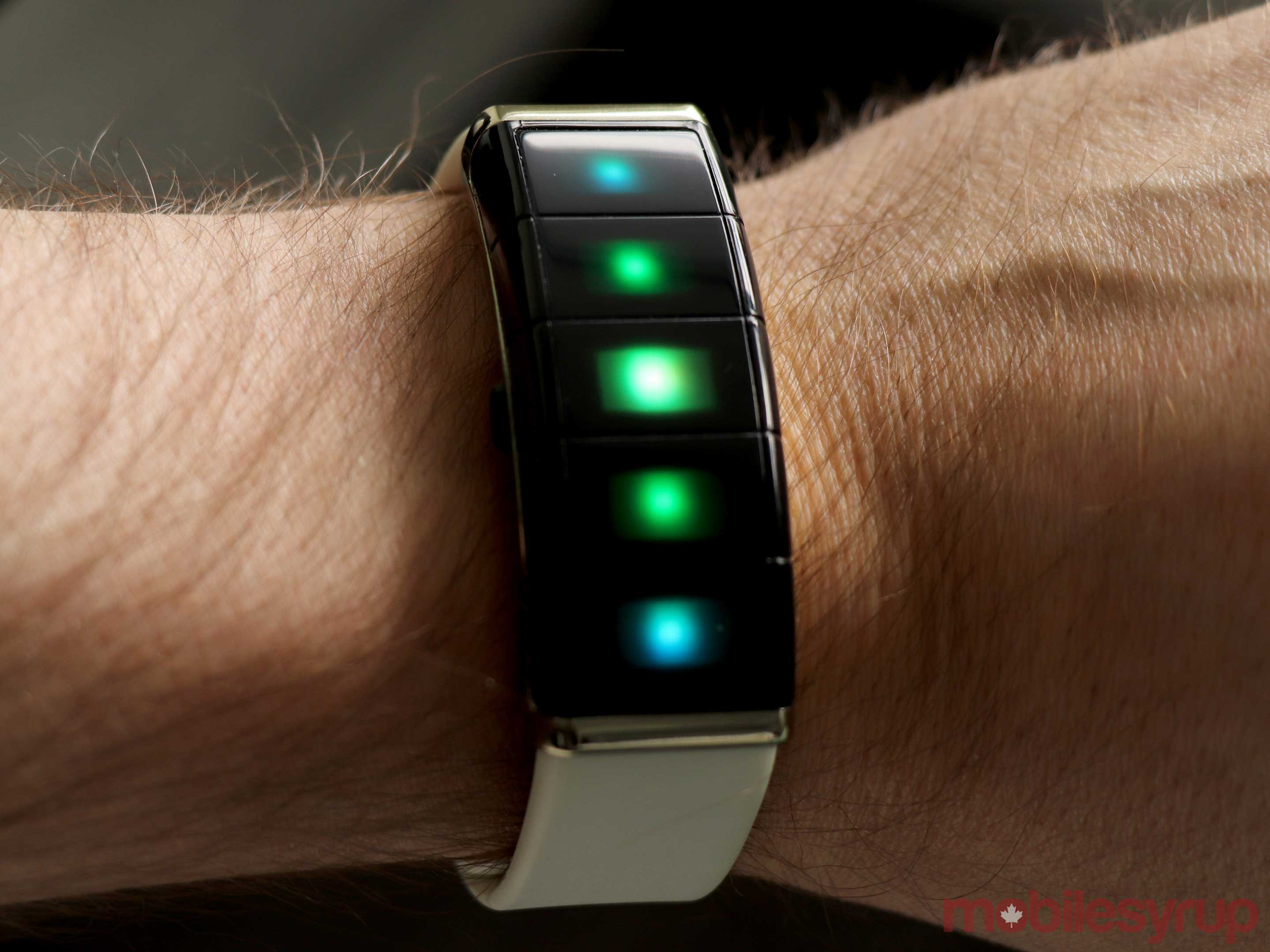 The Nex Evolution is made up of a plastic rubberized band with a dual latch and thick centre console. There is no heart rate monitor underneath, nor even a screen that displays any text. The top of the unit has a surface split into sectional units called “Mods” that display individual colours.

The Mods don’t display any text, so even something as simple as telling the time isn’t available here. Colours and patterns communicate when something happens once specific Mods are programmed to perform a set function. Each Mod has a corresponding colour by default (they are customizable through the iOS and Android app): green, blue, purple, red and yellow. There’s only one physical button that acts as a power and home button.

Being touch-sensitive, you can assign two hacks to each Mod — one double-tap and one long press. In some cases, accessing a hack can lead to additional controls, like for music playback or camera remote. The band pairs with a phone via Bluetooth, and the app covers the initial setup and customization. Programming a hack is either done by choosing an existing one or creating one.

Mighty Cast labels these as “when, do” to describe the trigger-and-action sequence a Mod instigates.

But the lights are intended to work with notifications too. It’s not exactly Morse code, but on a similar track. For example, five flashing green mods could indicate an incoming call, while a single flashing mod might note a text message or email. Since the band also vibrates, that’s the first sign that something is happening. The light pattern confirms it.

A blue and yellow pattern shows the band is asleep, while a blue and red pattern means the connection is down.

Mod on the spot 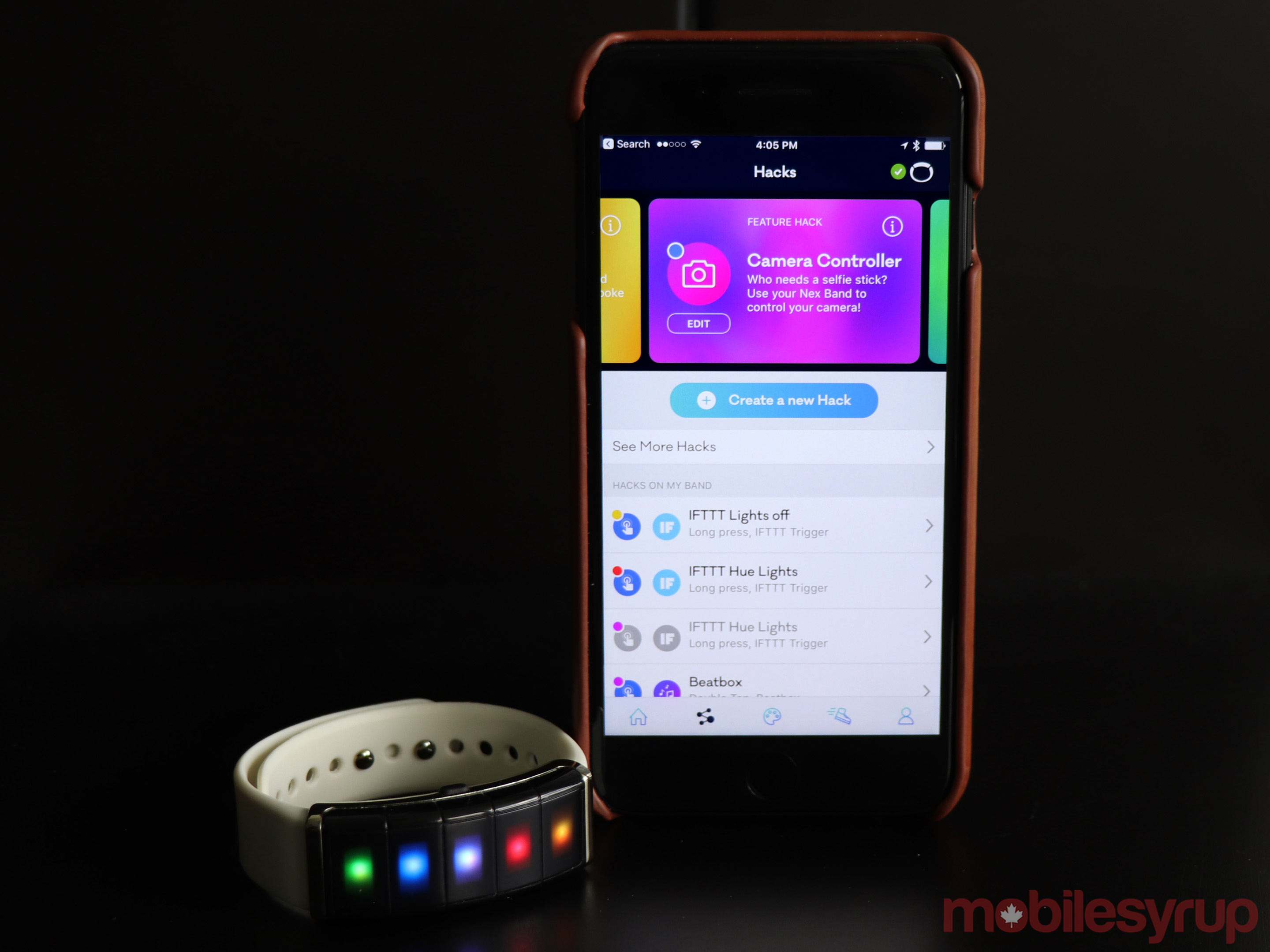 To get things started, a number of quick hacks are available on the app. A step counter that plays a sound and light pattern for every 1,000 steps (there’s also a 10,000 step tracker through IFTTT). An alarm clock that goes into action at a set time every morning. Fake phone calls, funny sound alerts and even beatboxing.

An interesting one is Close to Friend, where a sound and light pattern goes off when an inner circle friend comes into closer proximity. The music and camera controllers are also quite good, albeit with a few caveats.

For instance, because Apple doesn’t allow for direct integration to its own camera app, Mighty Cast essentially built one into its own. When I used it, I double tapped a Mod to snap a photo or long pressed the same one to start recording video. To make it work, I needed the iPhone’s screen unlocked and the Nex app to be open. This was equally true of Android phones as well.

Most hacks require your own ingenuity. Creating one isn’t hard if you’re choosing between the standard options Mighty Cast provides. Wading into IFTTT territory takes far more steps to complete the process because it involves launching the IFTTT app to set permissions and confirm what the hack is supposed to do.

Tech-savvy users who love tinkering with such things probably won’t mind, but the casual user may want less fuss from beginning to end. Except the very nature of the Mods is to be inclusive, which is why the company wants to push the conceptual side of user interaction. If I have a Nex Evolution, and so does a friend of mine, we should be able to communicate with it somehow.

Being alerted to proximity makes sense, and I can see how some might like sharing light patterns and things of that nature, only there’s still a long way to go to make that case. There’s a difference between receiving an emoji on a smartwatch and a light pattern on this band that conveys the same emotion. Having a light pattern go off that resembles something like KITT from Knight Rider might be cool, though I found interpreting this aspect of the band to be highly subjective. 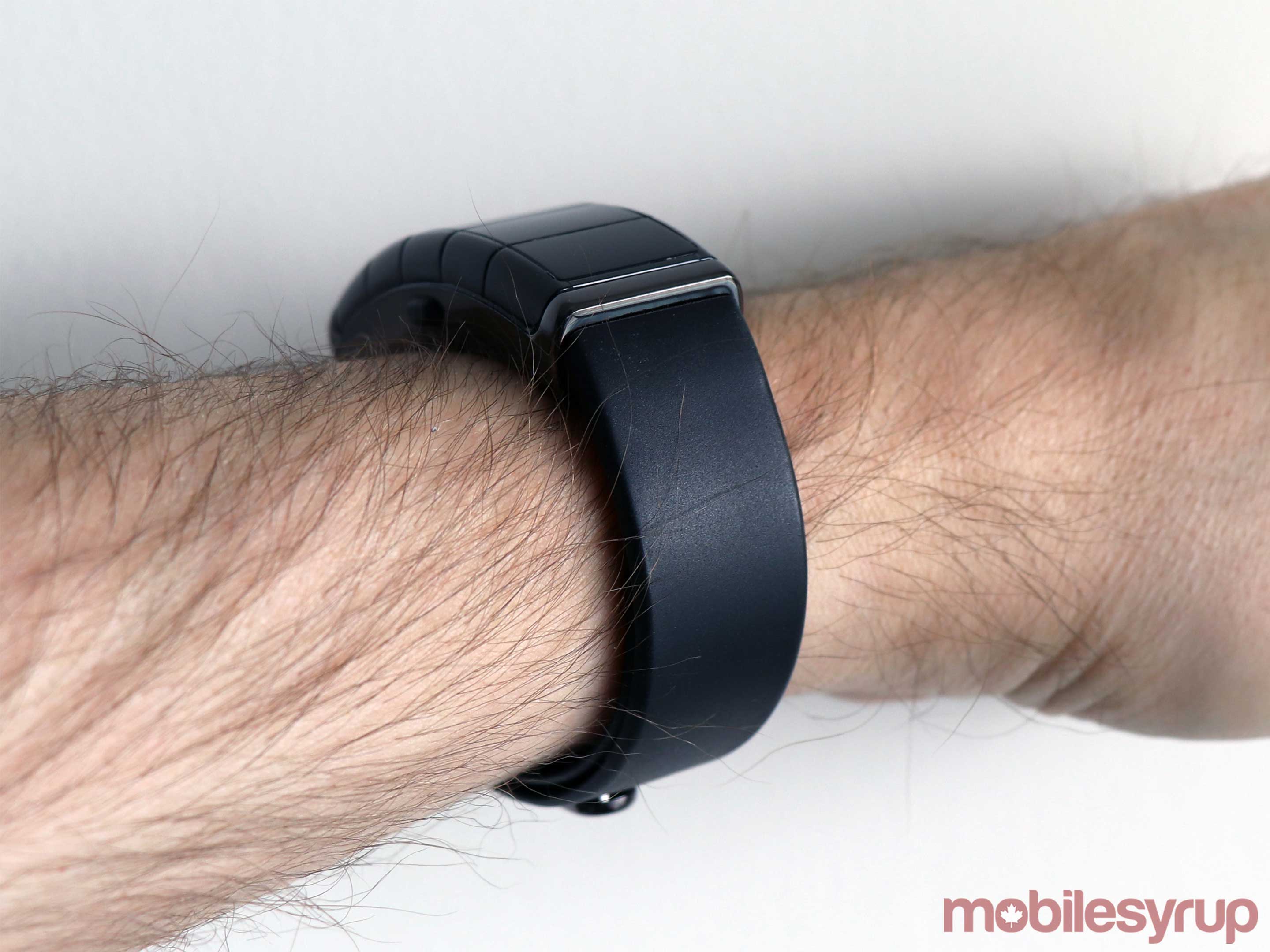 I touched on the camera controls, which were excellent when it came to a remote shutter while the phone was either resting on something or on a tripod. I could see how selfies and night shooting benefit from that hack.

Again, however, the band can only go as far as a hack can take it. With the Mods, I could zoom in, zoom out and flip between rear and front cameras. But I couldn’t set a timer. That matters because if I’m to take a selfie, one hand has to basically be touching the other wrist to trigger the camera. At that point, I might as well just manually set a three-second timer on the camera app itself for a more natural pose unless it was from the chest up.

There was also no way to access different lenses. I couldn’t use the 2x optical zoom on the iPhone 7 Plus, nor the wide-angle lens on the LG G6. I can let Mighty Cast off the hook for that because those features are generally not available for third-parties to tap into anyway.

The music controller hack had its own conveniences. Using it to play, pause, skip a track or control volume was pretty neat. Not every fitness band offers full playback control, so while the Mods gave me no visual on what I was listening to, I could at least how loud I wanted to go and whether to skip or go back a track.

An upcoming update will extend control to when music is being streamed to a speaker over Wi-Fi, like Spotify through a Chromecast. In my testing, the band only worked with Bluetooth streaming, not with anything Wi-Fi-enabled. This cut out Sonos, in particular, of which a fix is apparently coming. 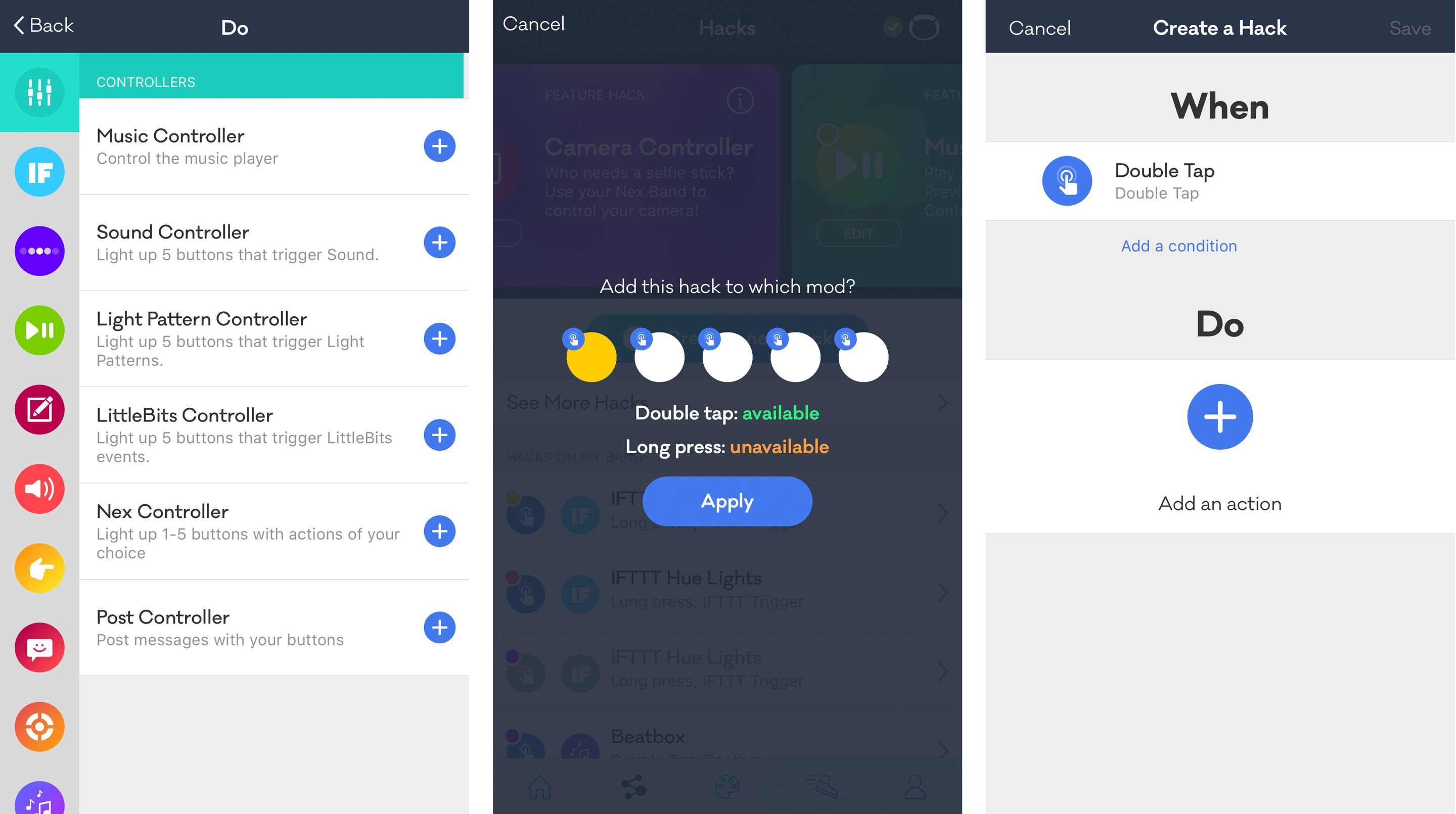 The Nex Evolution doesn’t offer extensive activity tracking beyond the basics. Steps, distance and calories are measured, and goals can be set, but that’s about it. Accuracy is decent enough, though I’ve seen better results in other bands from Fitbit, Mio or TomTom.

Mighty Cast wants to pursue gaming as a key part of the band’s value proposition, and there may be some promise in doing that. Using it as a controller or as an extension of a game seems interesting, though there wasn’t much I could do. It will require collaboration with developers to code that functionality in, given there was no way for me to create a hack for it.

For smart home devices, integrating IFTTT covers a fair bit. I was able to control Philips Hue or Belkin WeMo lights easily with the band. Assuming this expands further, there should be intriguing possibilities in accessing more devices. It’s just a little early to really assess how good that could be. What’s available now is pretty cool though.

With three days of rated battery life, the true number is more or less accurate. The more notifications are assigned to the band, and the more you use the Mods, the less you get.

With very minimal use, I was able to squeeze out almost an extra full day. Double-clicking the home button shows battery level with green representing 20 per cent life on each Mod.

For a category that has seen little distinct conceptual innovation in the last year or two, the Nex Evolution takes a unique approach. Where other band manufacturers are trying to squeeze in more legible information on tiny screens, Mighty Cast has chosen a different path that substitutes text with colour. It’s the sort of design decision that may attract and alienate all at once.

Nex Evolution’s own expansion is, at least in part, tied to what IFTTT adds on. Tech-savvy users will feel more at home here than newcomers. If activity tracking is the primary function that draws in new wearables’ users, this band doesn’t make that cut because it lacks much of what others offer. It’s the integration and functionality that users should want because there’s no other reason to go this route.

Bell says Apple Watch Series 3 ‘may not be able to’ supply location to 9-1-1 operator...