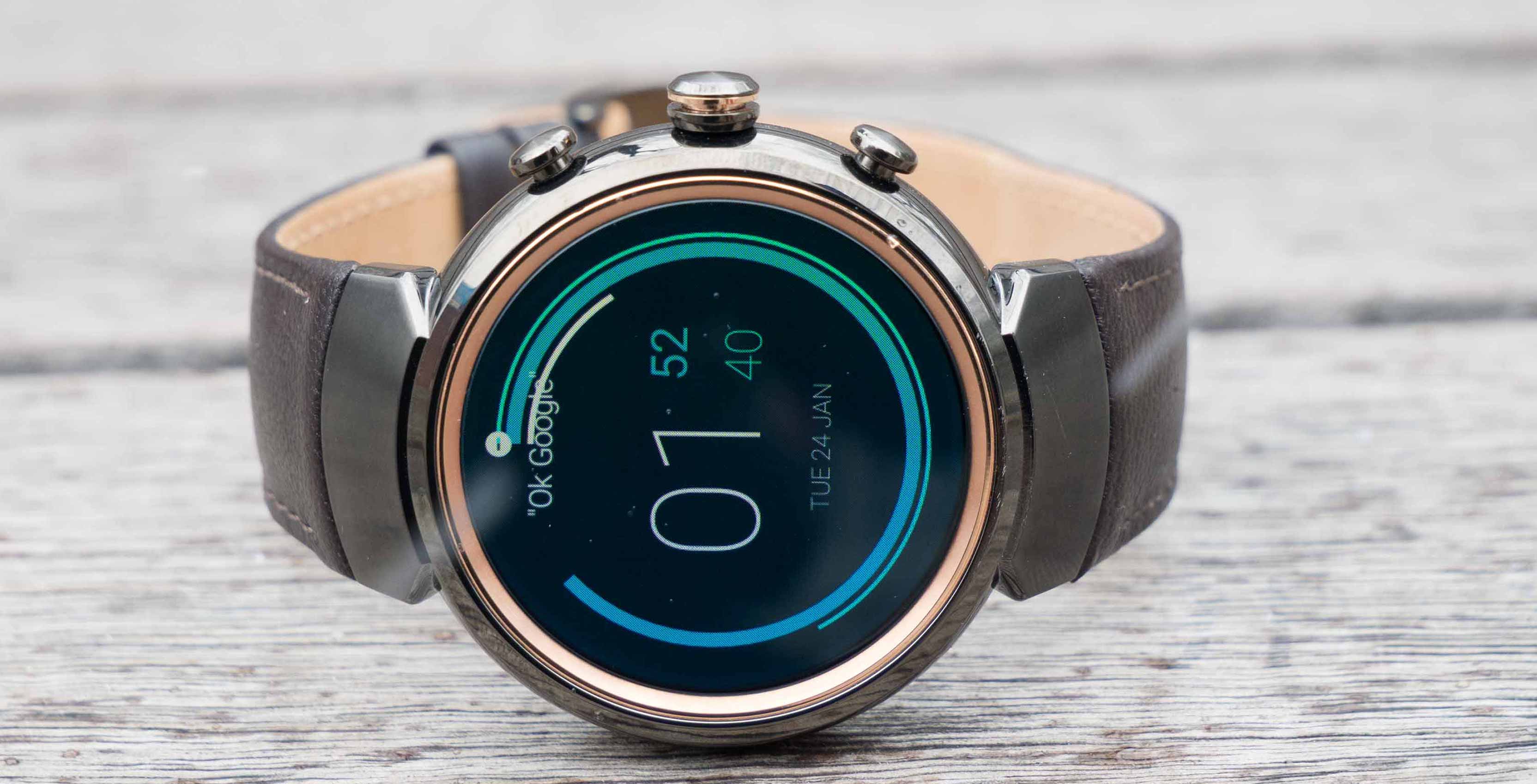 The Asus ZenWatch 3 arrived in Canada in early November 2016 to significant excitement among fans of Android Wear devices, especially given the fact that Google’s wearable operating system has faced a dearth of releases lately.

Motorola hasn’t produced a new Android Wear watch since 2015’s second-generation Moto 360 and has said it doesn’t plan to at any point in the near future. Samsung, too, has sworn off Google’s OS in favour of its own operating system, Tizen. The operating system itself has been dormant, delaying the launch of 2.0 — the first major version update since Android Wear’s launch in 2014 — from fall 2016 to winter 2017 in the name of quality improvements.

Regardless, a faithful contingent of Android Wear loyalists who are eagerly anticipating both 2.0 and the promise of a next-generation smartwatch that will do more, better.

Is the ZenWatch 3 that device? MobileSyrup’s Rose Behar and Patrick O’Rourke tested out the $349.99 CAD wearable to find out.

One of the best looking Android Wear smartwatches 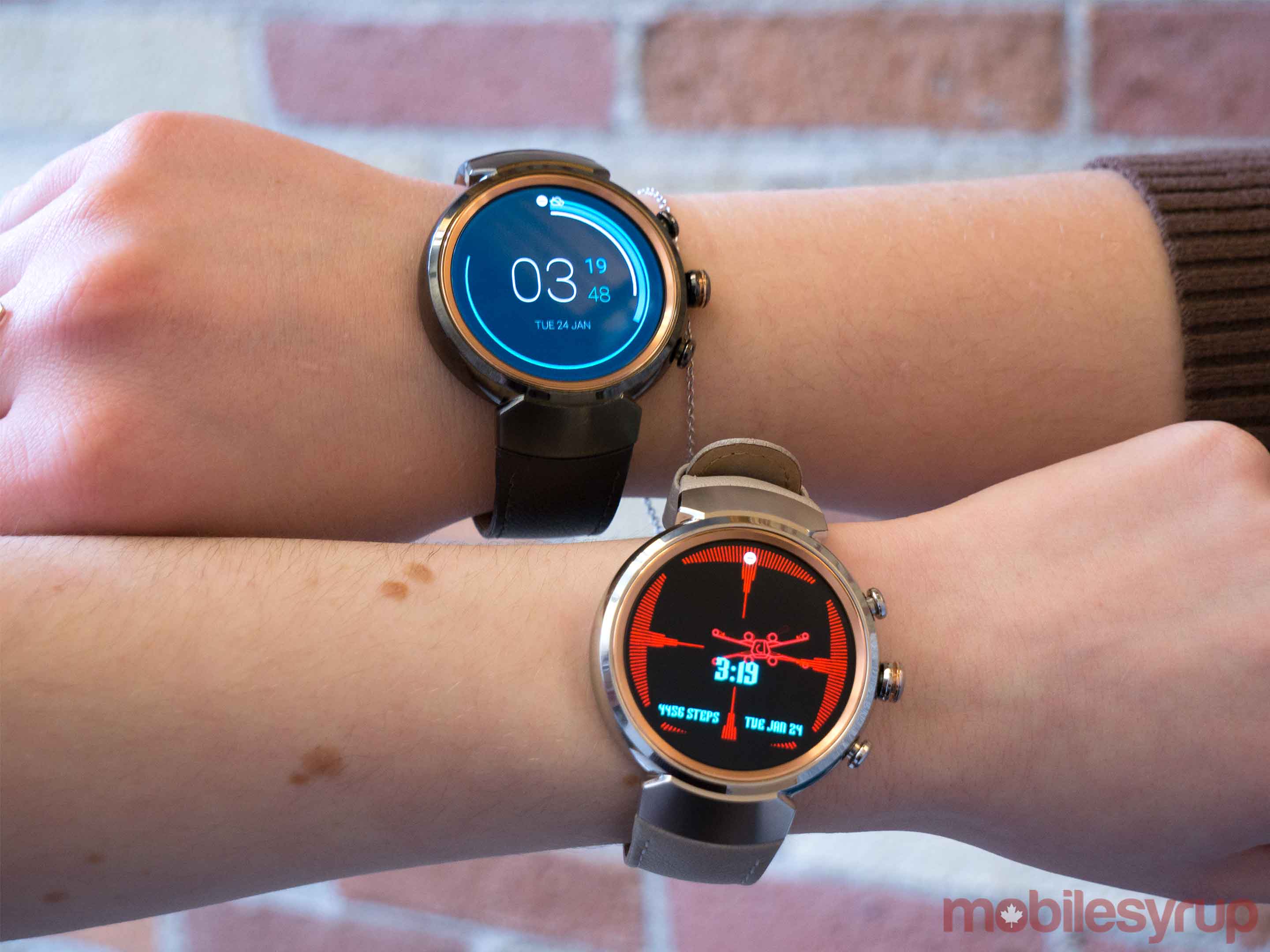 One of the first things I noticed about Asus’ ZenWatch 3 is how stunning it looks. I’ll preface this by stating that I haven’t used many Android Wear watches or smartwatches in general, with my experience being mostly confined to the original ZenWatch, multiple Pebble smartwatches, the Moto 360 1st Gen and 2nd Gen, and Apple’s Series1 and 2 Apple Watch.

The “flat tire” many complain about when discussing the Moto 360 — I’ve personally never seen it as much of an issue — isn’t present with the ZenWatch 3, which will be a welcome sight for many. The ZenWatch 3 is also a completely round smartwatch with three buttons that stick out substantially from its side.

The ‘Gunmetal’ model I used has a brass-looking stainless steel finish that gives the wearable the look of something that belongs in the Bioshock video game universe. This look admittedly won’t be for everyone, but I definitely feel it has a certain level of charm to it. I am also fond of the Rose Gold and Silver versions of the ZenWatch 3, though every iteration of the wearable has a somewhat “steampunk”-like vibe to it. 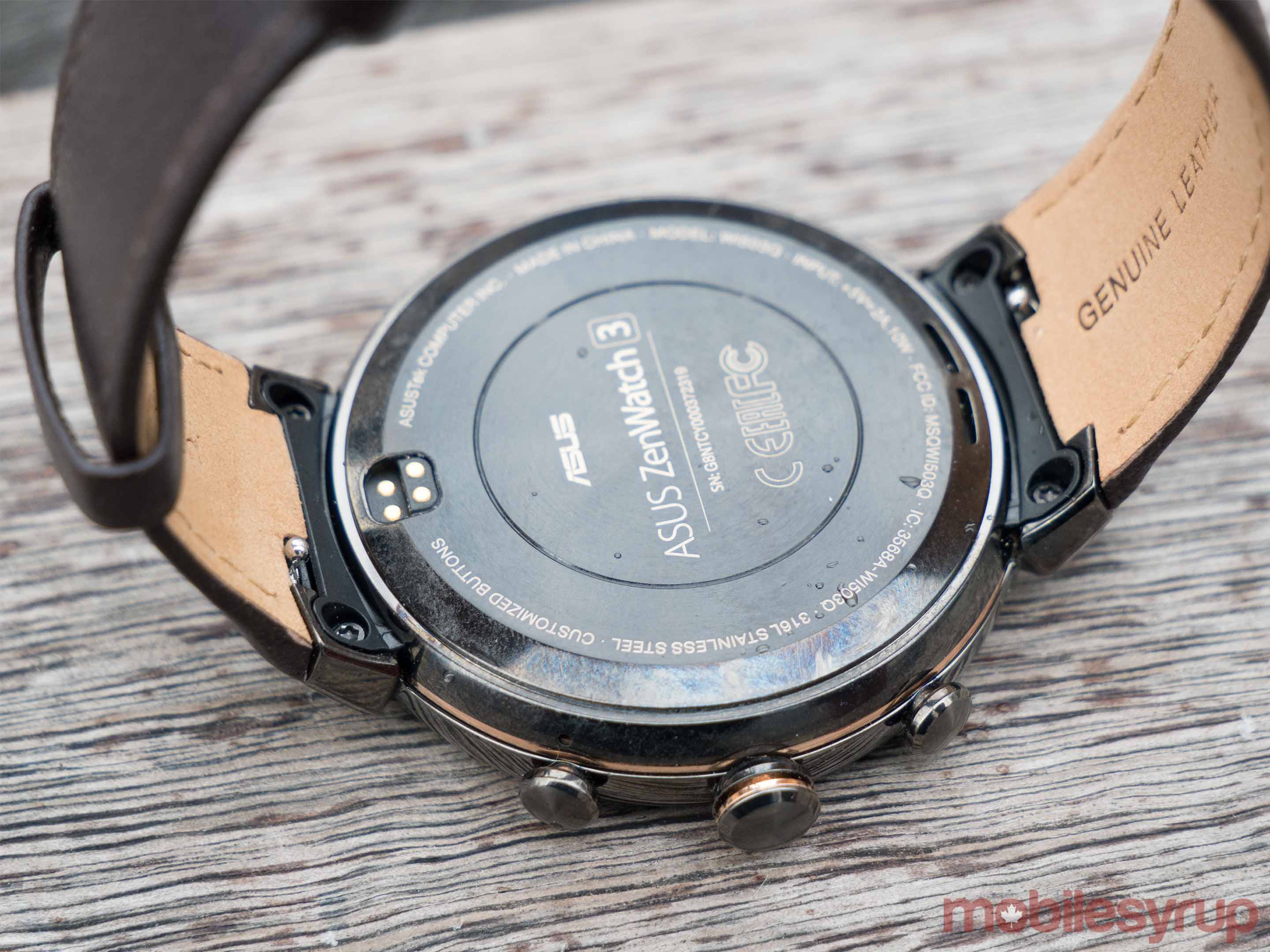 I do, however, feel the ZenWatch 3’s buttons stick out slightly too much. In some cases, I actually ended up getting them stuck on my clothing and other objects. On the plus side, the buttons have a tactile feel to them that’s not present in the Moto 360 or Apple Watch’s digital crown, giving the smartwatch a very analog, traditional watch feel. I’d even go so far as to say that despite the fact that the buttons stick out from the watch’s body a fair amount, they’re my favourite of any Android Wear device I’ve used in the past.

In terms of size, the ZenWatch 3’s case comes in at 45mm wide, making it a little bigger than Huawei’s offerings and the 42mm Moto 360 v2, the Android Wear watch I’ve spent the most time using (full dimensions come in at 45mm x 45mm x 9.95mm x 10.75mm). Still, on my relatively svelte wrists, I found the ZenWatch was a little large for my taste and I know this is an issue my colleague Rose had with the watch as well. The ZenWatch 2 came in two sizes and it would have been nice to see Asus adopt the same strategy with the ZenWatch 3 because not everyone has enormous wrists. Unfortunately, however, that isn’t the case with this year’s ZenWatch.

The watch’s lugs (a word watch makers use to describe where the strap attaches to the body of the watch), are flat and angular, extending down past the bottom of the ZenWatch 3, which makes it sometimes uncomfortable to wear, especially for those with smaller wrists. The strap never quite fit perfectly on my arm, with the lugs forcing ample space between my wrist and the watch itself. This is an issue I have not experienced with smartwatches like the Pebble Time Round and Moto 360, though it’s a problem I ran into with the disappointingly uncomfortable Microsoft Band 2. 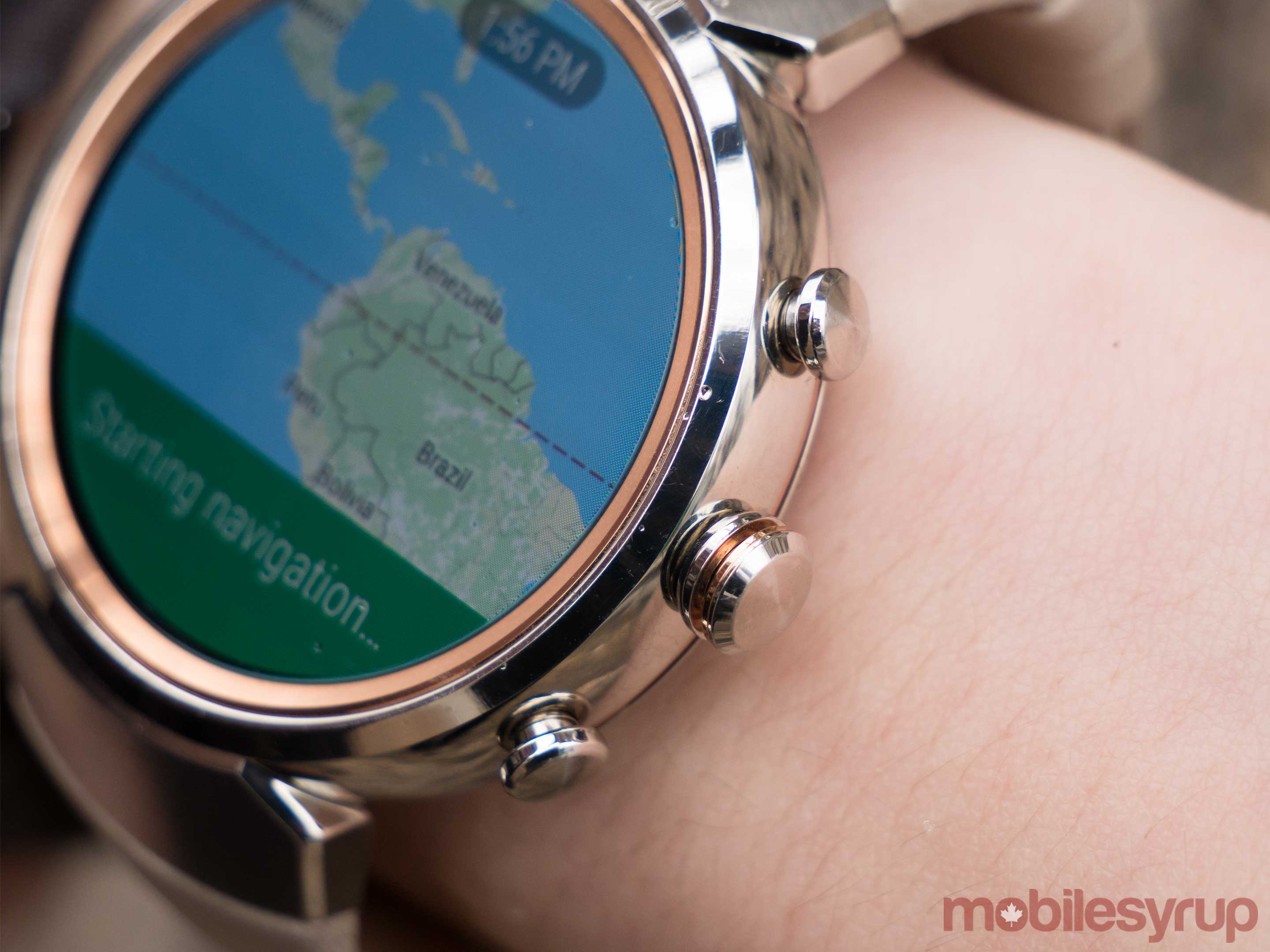 All that said, I’m actually fond of the ZenWatch 3’s aesthetic. It really is a great looking smartwatch that sits comfortably beside other major players in the space, including the Moto 360 2nd Gen, Apple Watch and even Samsung’s recently released Gear S3. It’s also worth pointing out that this isn’t something I ever thought I’d be writing about an Asus product, having not had great experiences with the company’s various smartphones over the years. 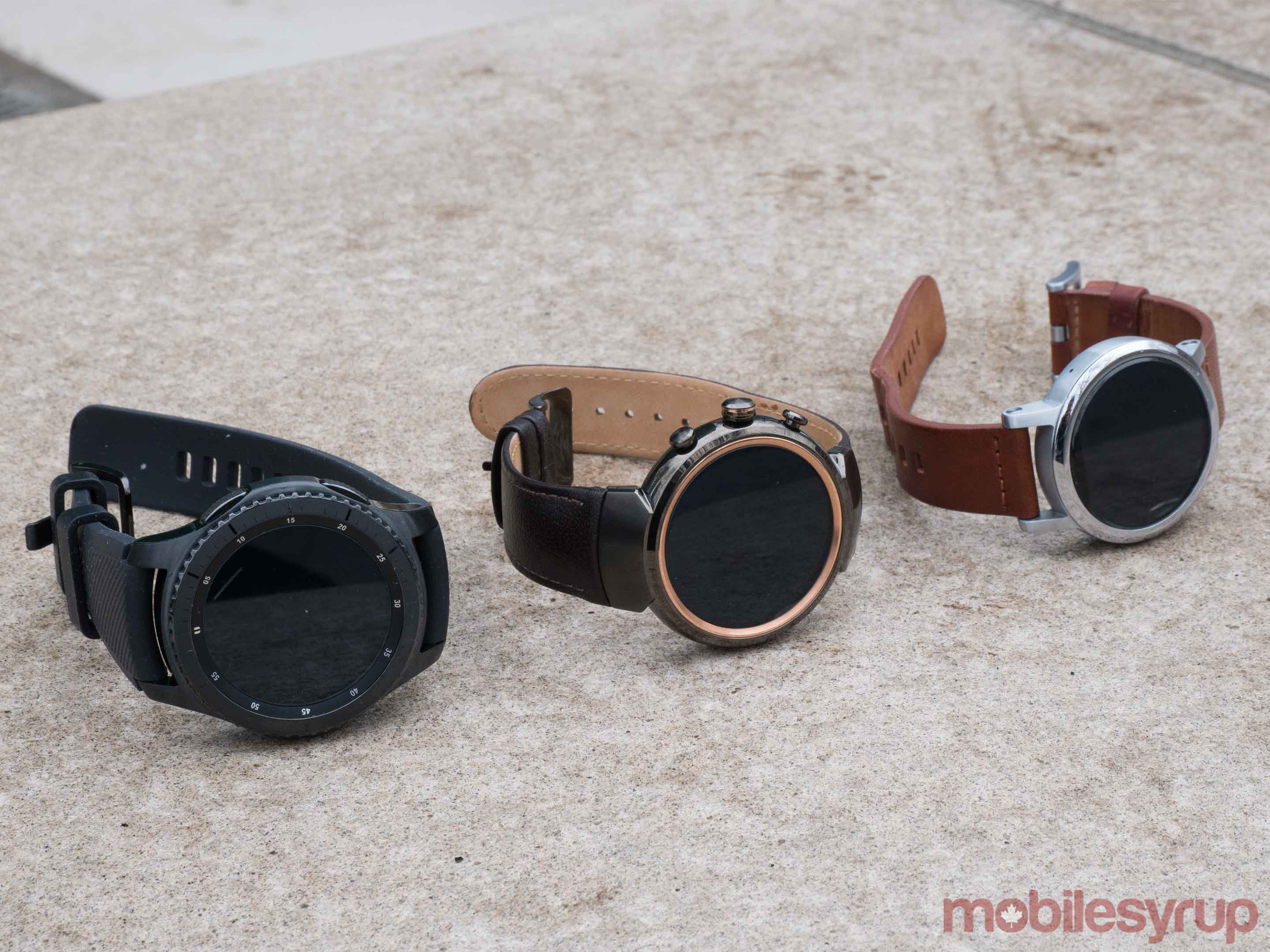 One of my main issues with Android Wear smartwatches in the past has been the fact that their displays aren’t always responsive. This could be due in part to the fact that a smartwatch’s screen is smaller, thus making it difficult to touch the display exactly where I want, or some sort of technological hitch manufacturers haven’t quite worked out yet in the smartwatch industry (I’ve even had the issue with the Apple Watch Series 2).

In terms of the ZenWatch 3, I still ran into the above issues, though less frequently than I did with the Moto 360 2nd Gen, my main Android Wear smartwatch. Overall the ZenWatch 3’s 1.39-inch 400 x 400 pixel display is vibrant and easy to see outside (a necessity for any smartwatch) and was responsive in 90 percent of cases. The watch also features an ambient light sensor, a feature numerous other tech publications have cited as rare in fully round smartwatches. This helps save battery life and makes playing around with screen brightness less of a necessity.

Whether a software fix or something related to the gyroscope or accelerometer in the smartwatch, I’ve also found that the ZenWatch 3 lights up quicker and more consistently when I raised my wrist up — as long as I’m not using it with an always-on display obviously — when compared to its competitors. 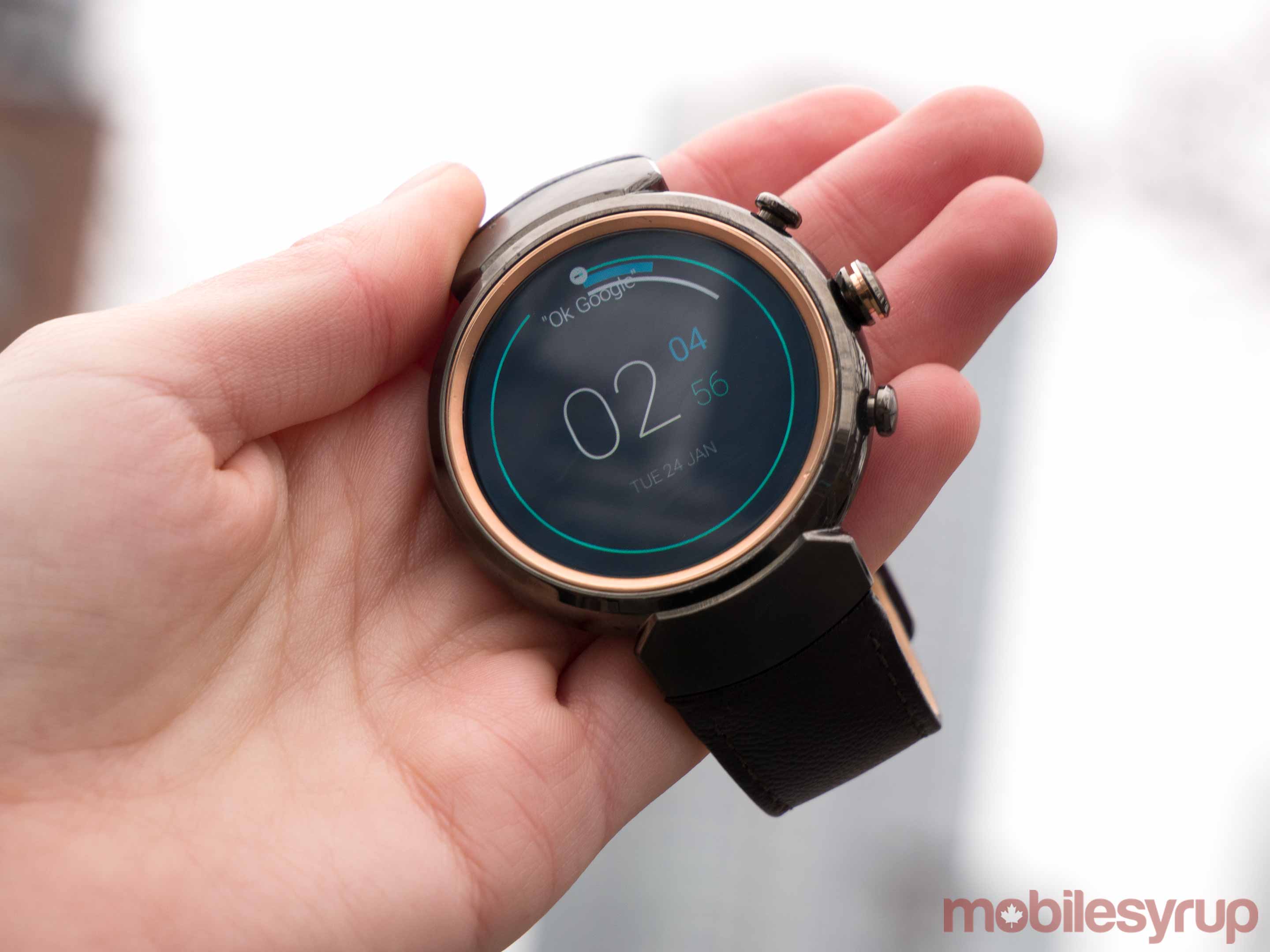 The ZenWatch 3’s 340mAh performed very well during my time with the device. I generally got a day and a half to two day’s life off a single charge, though I’ll admit my usage was minimal — receiving notifications and checking them, glancing at the time and occasionally changing watch faces or using voice commands to make notes. Considering that the functionalities of an Android Wear smartwatch without wireless data connectivity are not extensive, however, I suspect most users would find similar results.

As for charging, the wearable features quick charging wireless technology. I found myself able to revive the watch from dead to 100 percent in around 60 minutes, a commendable charge time.

My only minor qualm was slight overheating during charging, which could erode battery in the long term, but it never became uncomfortably hot to the touch. The charger is also a step above smartwatch chargers I’ve used in the past because of its magnetic, angular design that allows the watch to rest in a steady, upright posture that is not at risk of falling over. 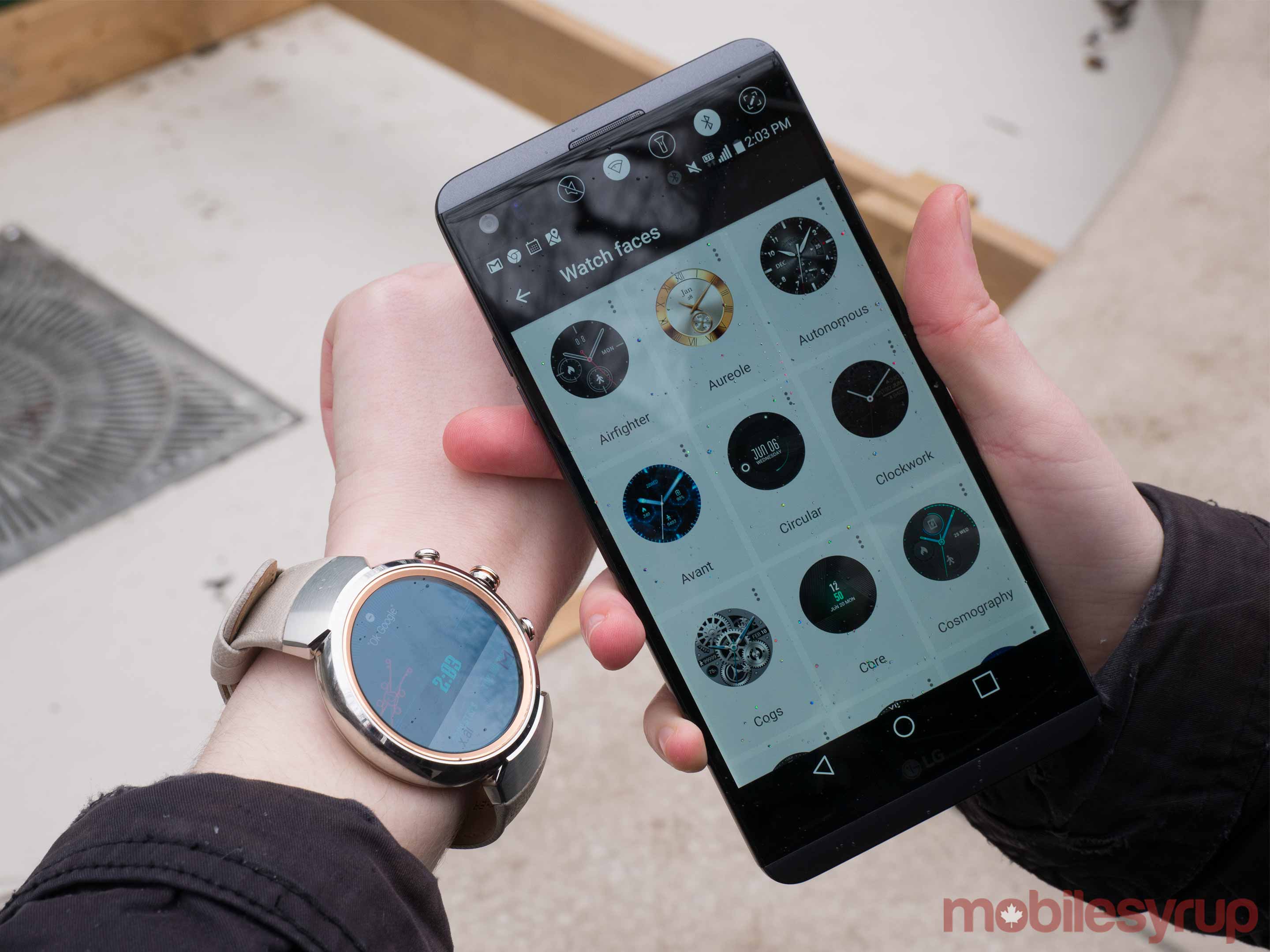 The Asus ZenWatch 3 features the tethered (non-LTE connected) version of the Snapdragon Wear 2100, a SoC that debuted in February 2016 and that is tailored to wearable use. At launch, the chipset’s chiefly marketed attributes were its small size and low power use. One might question whether Asus fully took advantage of the first attribute, since the watch is only marginally thinner than the ZenWatch 2 by 0.1mm, but it seems the company did manage to take advantage of the chipset’s low energy qualities.

The processor is backed by 512MB of RAM and 4GB of internal storage using embedded Multi-Media Card (eMMC) flash memory. For those that are unfamiliar, the latter is a form of Multi-Media Card that is non-removable and used for solid-state storage.

As for speed and similar to Patrick, I found the ZenWatch responsive when it came to browsing and launching apps. During my time with it, I also didn’t experience any major crashes or instances of stalling. Shifting third-party watch faces to the Asus ZenWatch 3 was also quick work, as were the other third-party integrations I tried. 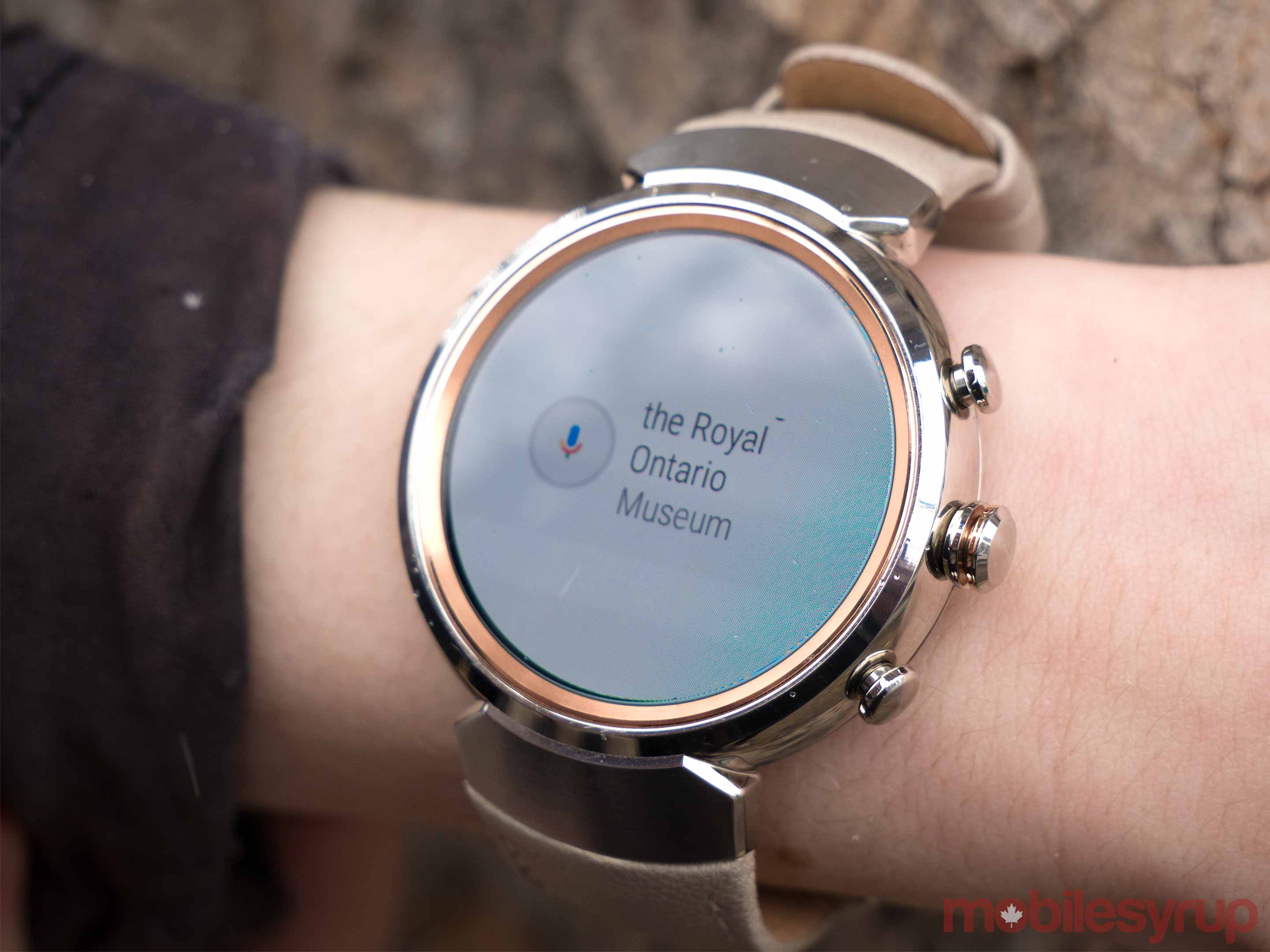 One of the key questions for many is whether the device will receive Android Wear 2.0 and be well-supported with future Android Wear updates. The answer, as per usual with most Android OEMs, is frustratingly unclear. The Android Wear 2.0 developer previews are only available for the LG Watch Urbane 2nd Edition and the Huawei Watch.

In September 2016, however, The Verge wrote that Google promised all Android Wear devices launching in the fall of 2016 (which includes the ZenWatch 3) will support Android Wear 2.0. Of course, the best course of action is likely to wait until February 9th, when Android Wear 2.0 is expected to be revealed alongside two new next-generation LG-created devices in what likely will be a partnership with Google.

Showing a promising commitment to its own upkeep, Asus also released a substantial update to the device, which included a new ECO mode and December security fixes, in early January. So while it’s difficult to give a final prediction, it’s likely that the ZenWatch 3 will get Android Wear 2.0, at least at some point. 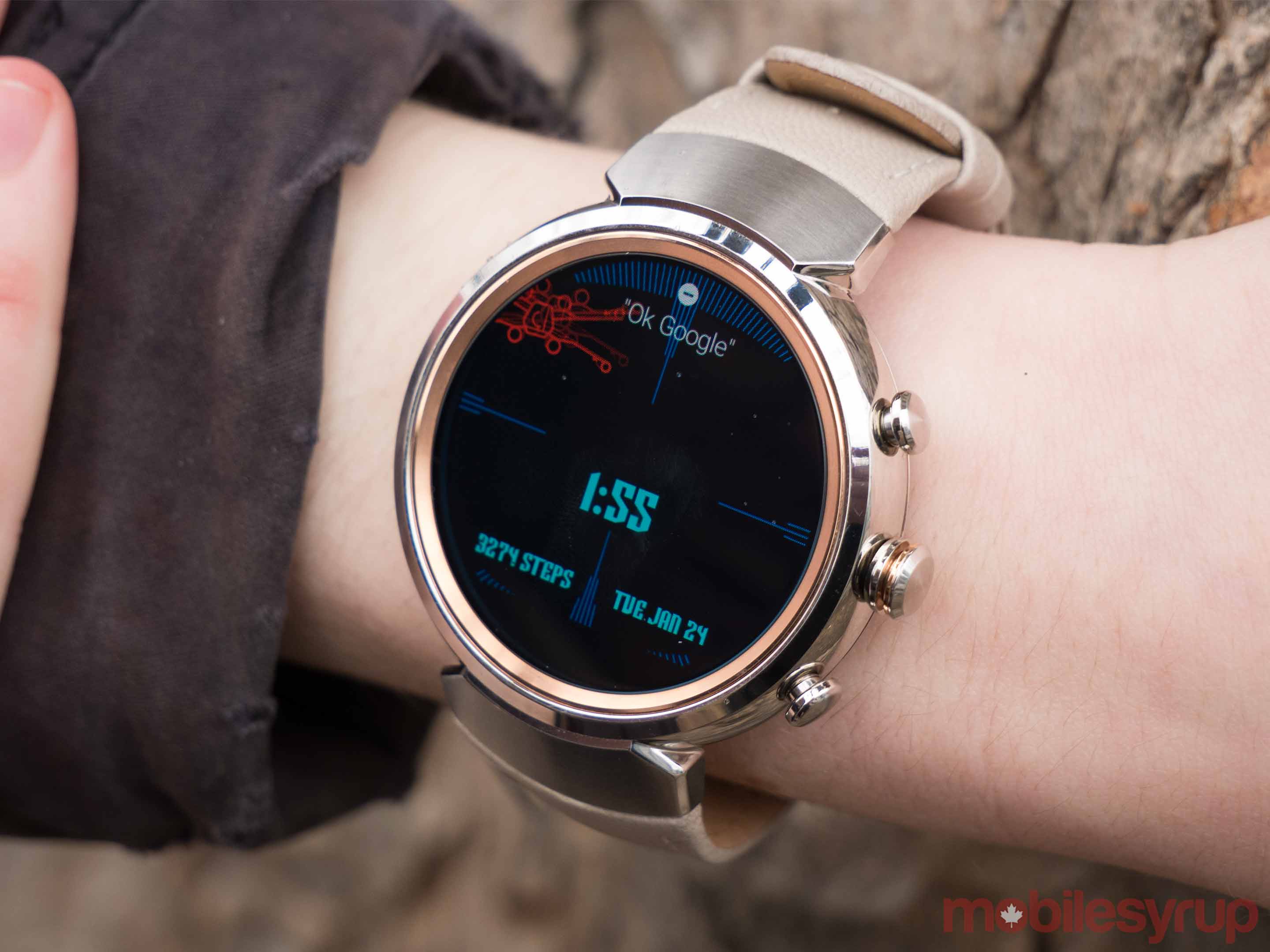 The ZenWatch 3 relies on Bluetooth 4.1 and Wi-Fi for connectivity — not unusual for many wearables on the market, but also not a forward-looking move by the company. The inclusion of connectivity in a premium smartwatch could finally provide wearables with the functionality needed to make them less of a luxury and more of a tool. With one of LG’s forthcoming wearables reportedly featuring an LTE connection (the LG Sport), Asus has positioned the ZenWatch 3 in a slightly vulnerable spot. Only time will tell whether it will remain one of the best Android Wear options on the market, or takes a sudden fall.

The smartwatch features a 3D gyro, 3D accelerometer (referred to simply as 6-axis G+A) and an ambient light sensor, but lacks a heart-rate sensor, a slightly disappointing omission considering it was one of the main things I’ve enjoyed with other wearables on the market, lending a more sporty vibe to them. I will admit, however, that the accuracy of wrist-based heart rate sensors on wearables has been brought into question before — so the exclusion may not be much of a loss when it comes to valuable data.

Unclear what the future holds

At $350 CAD, the Asus ZenWatch 3 remains a pricey accessory, albeit one that still manages to be one of the best Android Wear watches on the market. With the utility of wearables, particularly smartwatches, in question right now, and with the reveal of LG's new smartwatches, as well as Android Wear 2.0, on the horizon, it's difficult to recommend someone run out and purchase a ZenWatch 3 immediately.

The more cautious approach would be to wait a few weeks in order to see how LG's smartwatch offerings pan out, as well as official word on whether or not the ZenWatch 3 will get upgraded to Google's more feature-rich Android Wear 2.0. Still, if you're sold on the concept of a smartwatch and have been waiting for a device that rivals the Moto 360, then it's difficult to go wrong with Asus' sleek-looking Zen Watch 3. We do, however, wish Asus stuck with the two size option this year. Not everyone has large wrists! Do you like the idea of a two-person review? This is something we're trying out here at MobileSyrup. Let us know what you think in the comments section.