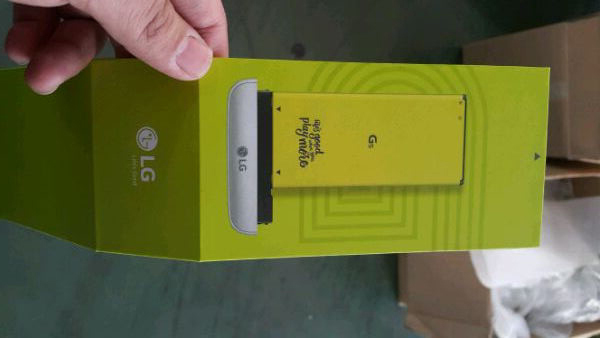 With the LG G5’s February 21st Mobile World Congress reveal only a few days away, leaks about the device are trickling onto the internet at a fast pace.

The latest leaked picture, which shows off the G5’s retail packaging from a new angle, seems to confirm the smartphone will feature a modular base, as well as a removable battery. Images posted earlier this week to a Dubai gray market reselling site gave observers their best look at the G5 so far, but unfortunately didn’t give us a glimpse of this modular port.

The image above, posted by French mobile website NWE, shows off what looks like the G5’s retail packaging, giving a clear look at the phone’s modular base. It’s rumoured the G5’s detachable bottom edge will be used for more than just swapping batteries. Speculation indicates the company could be planning to release a physical camera control accessory that slides into the port, giving the G5 controls that more closely resemble what is present on a traditional point-and-shoot camera.

While nothing has been confirmed yet, the G5 is expected to feature a smaller screen than the G4’s 5.5-inch display, possibly measuring in at 5.3 or 5.4-inches, and adopting a 2560 x 1440 pixel (QHD) resolution. The smartphone’s rear camera is rumoured to be somewhere between 13 and 15 megapixels, with a front-facing 5 megapixel snapper at the front. Other rumours indicate the G5 will adopt an all-metal build, USB Type-C, Android Marshmallow and a fingerprint sensor on its rear.