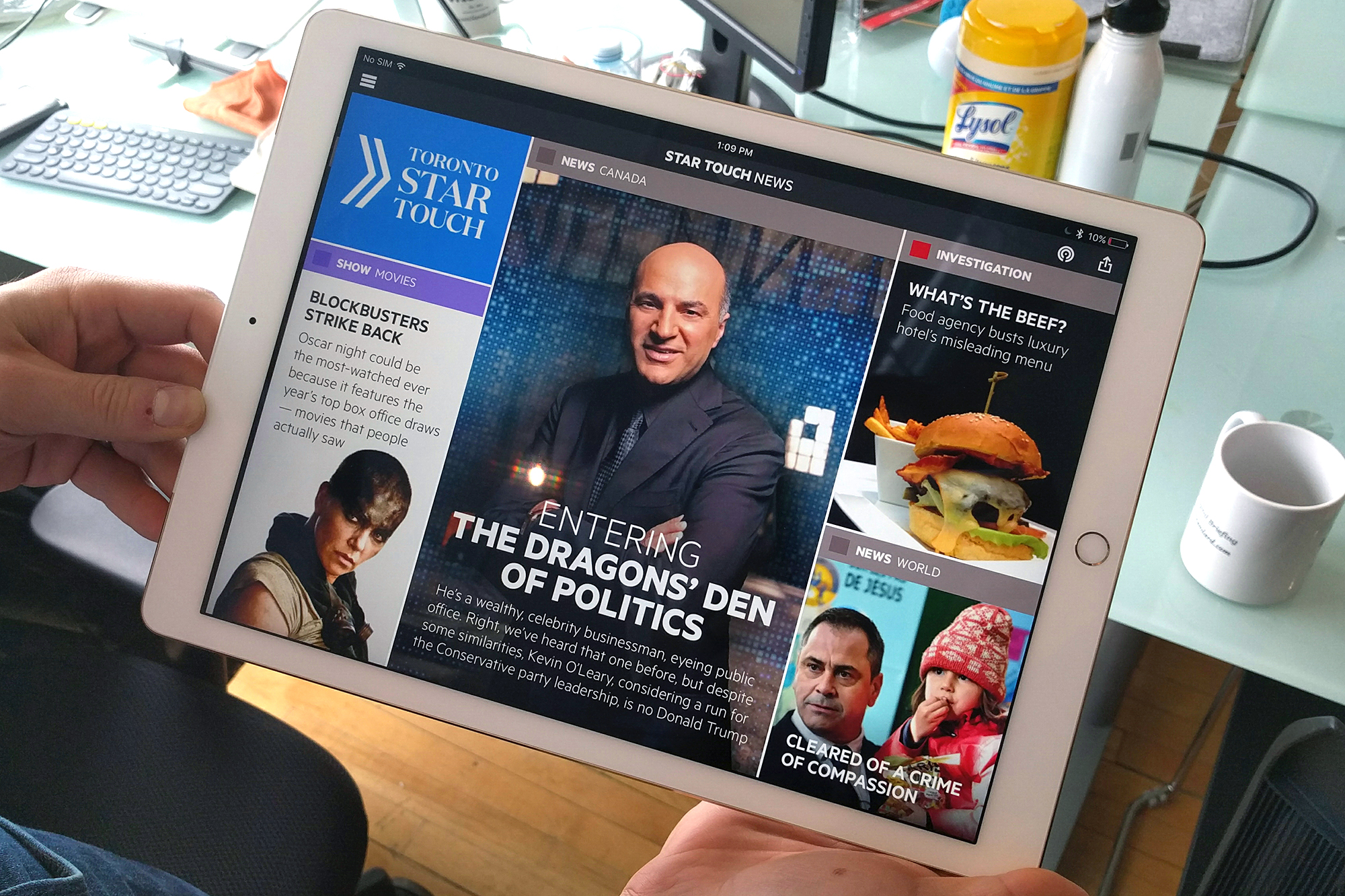 Thirteen Toronto Star employees, many of them part of the company’s recently launched tablet edition, have been laid off today, according to a report from Canadaland.

Michael Cooke, The Star’s editor-in-chief, reportedly sent out a memo early today stating that ten Star Touch tablet team members and three digital employees have been cut from the Toronto publication’s staff. The Star also revealed today that the paper has plans to close its 3.2-hectare printing centre in Vaughan.

With print circulation in decline, last September The Star made a major investment in a new tablet edition called Star Touch, powered by technology developed by French-language publication La Presse. According to recently release stats, Star Touch hasn’t matched the impressive circulation statistics – 520,000 weekly readers – La Presse has reached, which encouraged the publication to scrap its weekday print edition at the start of 2016.

The Star claimed in mid-November that Star Touch has been downloaded more than 100,000 times in its first two months, but has yet to release weekly reader numbers. The publication has the goal of attracting 180,000 daily tablet readers by the end of 2016 and has launched an aggressive marketing campaign that advertises the tablet publication on bus shelters, billboards and in banner ads. Torstar, the Star’s parent company, has even opted to sponsor unconventional events like the upcoming 2016 Enthusiast Gaming Live Expo (eglx), likely in an effort to attract a different audience to its burgeoning platform.

In the face of rapidly declining print revenue and circulation, tablet editions are often seen as the traditional news industry’s saviour, despite the fact that worldwide tablet sales continue to decline. The world’s major tablet makers, which includes Apple, Samsung and Lenovo, shipped 48.7 million units in Q3 2015, a 12.6 percent decrease over the same period last year.

The Star also has plans to outsource its customer service and administration work, which will affect an additional 15 staff members.

Postmedia, the company that owns the National Post, Toronto Sun, and a variety of other Canadian newspapers, recently scrapped its short-lived evening tablet editions of the Calgary Herald, Ottawa Citizen and Montreal Gazette after the digital publications failed to gain the traction the company hoped they would.

Yesterday, Postmedia posted a $4.2 million loss in 2015, a number bolstered by the company’s acquisition of Quebecor’s Sun Media newspaper chain. The company aims to cut an additional $80-million in operational expenditures by the end of 2017.

Star Touch is available for free on both iOS and Android.