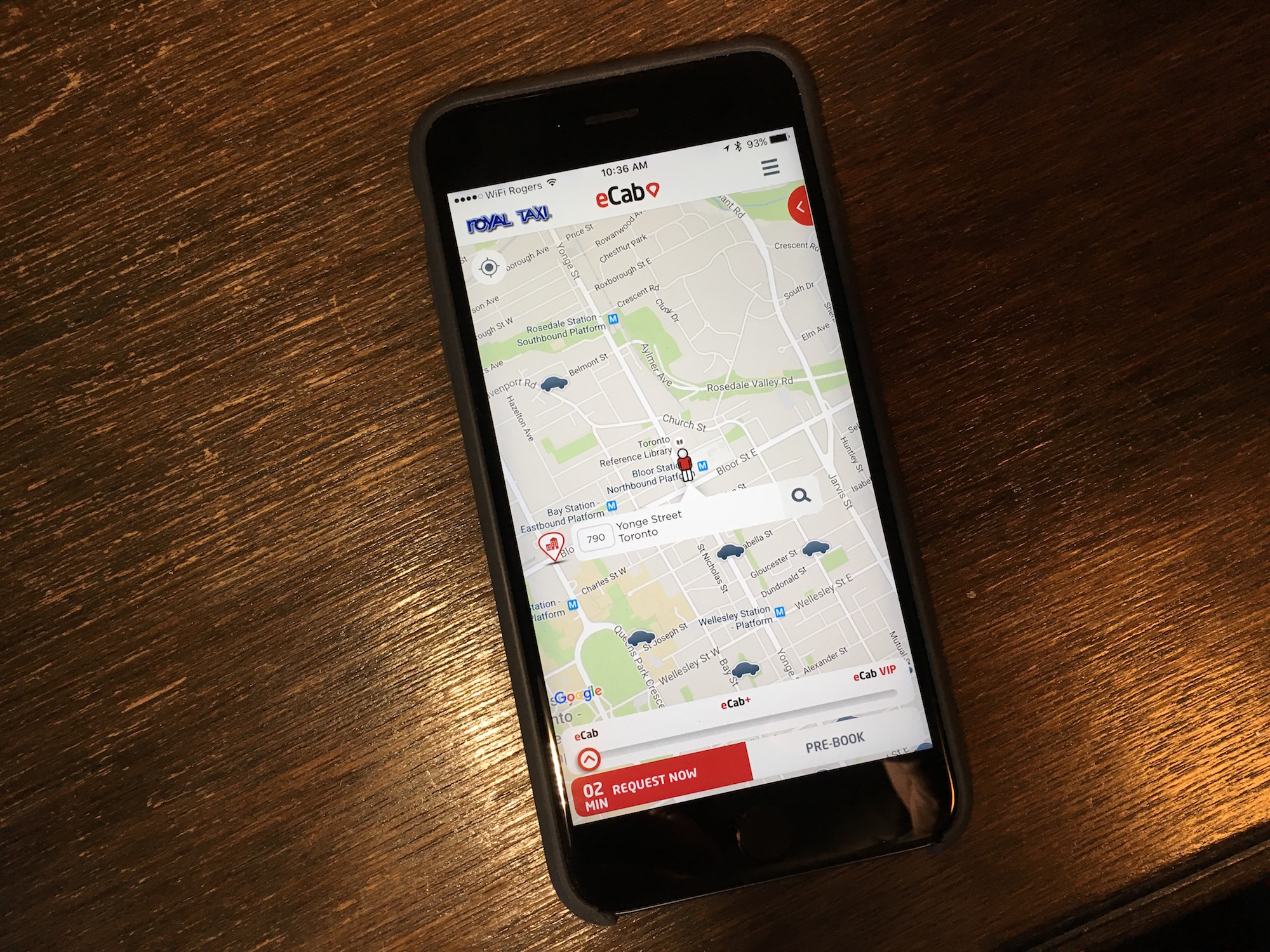 There’s a new company in Toronto working to disrupt the taxi industry, but you won’t see any new branding on the streets. eCab, a startup owned by French taxi giant G7, which has been in operation since 1905 and has a fleet of over 10,000 vehicles across Europe, has partnered with Toronto’s Royal Taxi in an effort to stem the ongoing movement of customers to Uber.

Already launched with the top four taxi firms in downtown Vancouver, eCab focuses on building out the technology on behalf of its clients, while giving customers a much better experience than they would have trying to hail a cab on a busy street.

“The taxi industry has been changing a lot over the past three to five years,” said Gilles Gomis, eCab’s regional head for North America, during a stop in Toronto to promote the new partnership. Short of saying that existing cab companies are technologically inept, Gomis believes the only way to keep millennials, which make up a majority of eCab’s client base, from fleeing to the often-cheaper and more intuitive UberX experience, which has amassed 400,000 riders in just over a year, is to beat it at its game.

The only way they can do this, he says, “is to use digital tools to overcome these new challenges, and to focus on quality and reliability.” The rhetoric of a customer-first approach, focusing on good service and reliable, legal means of transportation, has been a tough hill to climb for traditional taxi companies across Canada; in Toronto, appeals to municipal and provincial chambers have led to vigorous debates around how Uber should be regulated, and UberX drivers have routinely been ticketed or had their insurance revoked as the company skirts around the edges of the taxi industry’s legal framework.

eCab uses that regulatory ambiguity to its advantage. “We bet on the industry,” says Gomis, likening eCab to StarAlliance, which works to unify many airline brands under one cooperative banner.

In many ways, eCab functions similarly to Uber, though there are some distinct advantages aside from the knowledge that one’s driver will be fully licensed and the cab itself heavily inspected. Upon opening the app, geolocation shows the nearest drivers and how quickly one can be hailed. Three options, eCab, eCab+ and eCab VIP, provide various levels of service, the latter two for additional costs.

The basic eCab service, which does not require the user to register through the app, merely hails the closest Royal Taxi cab in Toronto, or the nearest of the four cooperating companies in Vancouver; payment is coordinated in the car, through cash or credit card, at the traveller’s discretion. Commuters pay the metered fare and nothing else.

eCab+, in addition to ordering the closest vehicle, lets customers pre-book one for a certain time, which is a distinct advantage over Uber’s market-based availability model. Under the “Plus” system, customers’ cars are dispatched in priority, though it’s unclear whether that means Royal Taxi cabs are instructed to ignore in-person hails in favour of the app.

Gomis tells me that drivers under the eCab+ class are specially-picked by the corresponding taxi companies, and promises a variety of vehicle types, including wheelchair-accessible vans.

Finally, eCab VIP is akin to Uber Black, the service offers a suite of sedans and SUVs, some of which provide in-car WiFi or iPads for customers to use while travelling.

The pricing models for eCab+ and VIP are straightforward, but it remains to be seen whether they can be sustained; the former takes the metered fare and adds 7 percent to the total, plus an additional $1.75, so longer trips will add up quickly. But payment is made through the app, so customers may not see the additional costs until it shows up as a receipt in their email.

The VIP class is slightly more complicated, with a base cost of $8 plus $0.50 per minute and $2.50 per kilometre for a sedan; SUVs pay a 15 percent surcharge on top of that.

Things are still early for eCab, and for the disruption of the taxi industry in general. Gomis notes that the company plans to launch in four more Canadian cities — Ottawa, Montreal, Calgary and Edmonton — sometime in the new year, and that its total city count should reach 50 by the end of 2015. Already operating in parts of India as well as many cities in Western Europe, the company is betting that there are enough people unsure about Uber’s customer safety record, and its fluid legality, to grow its own technology platform.

“Canada is an interesting place for the taxi industry,” says Gomis. “There are lots of actors focusing on quality, and they’re willing to focus on what the customer expects.” But, he says, until Uber came along, many of the companies did not realize how poor their own customer service offerings had been, and riders in big cities like Toronto and Vancouver had been putting up with poor experiences for lack of better options.

eCab is one of those better options, he says, because, not in spite of, the fact it partners with traditional taxi companies. “Every company we work with has decades of tools and experience.” Five year-old Uber, which just raised over $2 billion at a $62 billion valuation, may be the impetus for all this change, but the old guard isn’t ready to step down just yet.

eCab is available for iPhone and Android, as well as the Apple Watch.