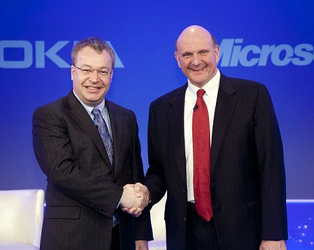 Microsoft CEO Satya Nadella is putting the final touches on a completely redesigned organization. Today, he announced that former Nokia CEO and current Microsoft Devices Group head, Stephen Elop, would leave the company after a designated transition period. The move is reportedly about shedding an Old Guard that was more aligned with Steve Ballmer’s Microsoft; Nadella and Elop didn’t agree on the future of Microsoft’s devices division.

The change puts Terry Myerson in charge of all consumer products at Microsoft, including the Windows division. It also consolidates the company’s disparate hardware divisions, so Surface and Lumia will be built under the same roof.

Yesterday, Microsoft released a new version of Windows 10 Mobile, the new name for Windows Phone, but hedged a release date, saying that it would come after Windows 10’s desktop and tablet release on July 29th, and within the 2015 calendar year.

Though Microsoft has committed to releasing new flagship Lumia devices, something it hasn’t done since late 2013, it’s unclear whether the Lumia brand, and Microsoft’s promise of support, will continue unabated.

Also on the chopping block is longtime Microsoft marketing VP and former Clinton campaign manager, Mark Penn, who is leaving to form a private equity fund.

Under Nadella, Microsoft has acquired a number of smaller companies, including productivity apps Sunrise, Wunderlist and Accompli, which the company turned into Outlook Mobile for iOS and Android last year.