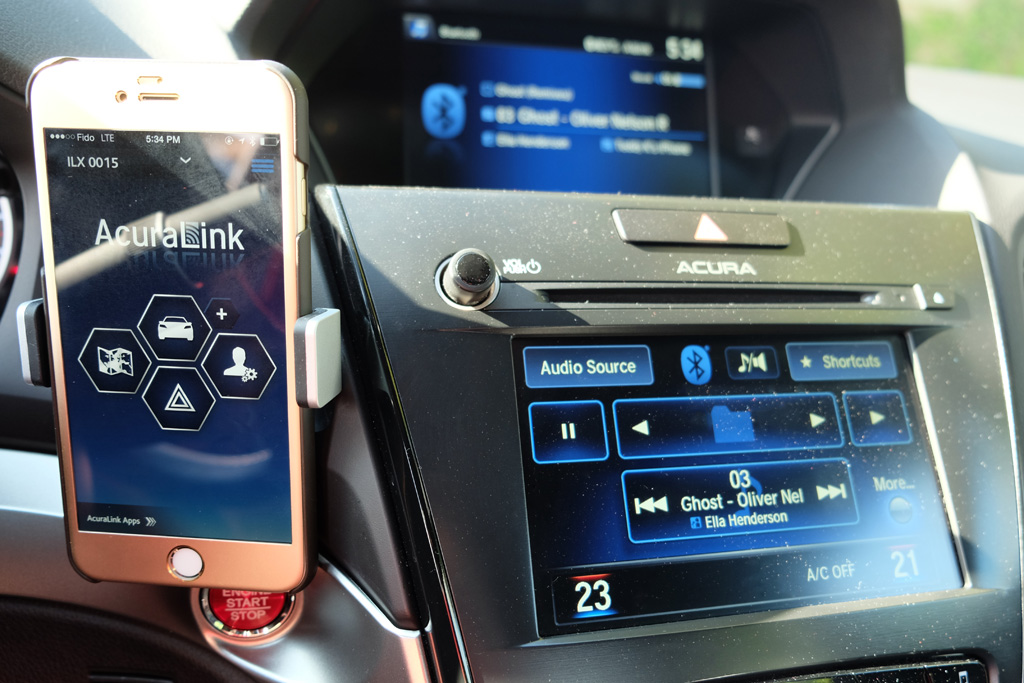 Japanese cars have a reputation for lasting a long time. To suggest a 10-15 year lifespan for a Honda or Acura vehicle is an expected consequence of buying one. This takes a different turn when it comes to the dash, where the AcuraLink infotainment system is partly designed to keep smartphones connected for years to come.

AcuraLink is essentially a three-tiered service that offers a variety of features. Standard includes in-car smartphone connectivity with some basic integration, navigation and free traffic updates. Connect takes the integration further through the use of a mobile app to interact with the vehicle, even from a distance. Premium takes all of that and adds a 24/7 live concierge, where drivers can call in and talk to a live person.

I tested all this in a 2016 Acura ILX, which was fully loaded with the Premium package. Acura currently offers all three packages free for three years on all 2015 and 2016 model vehicles. 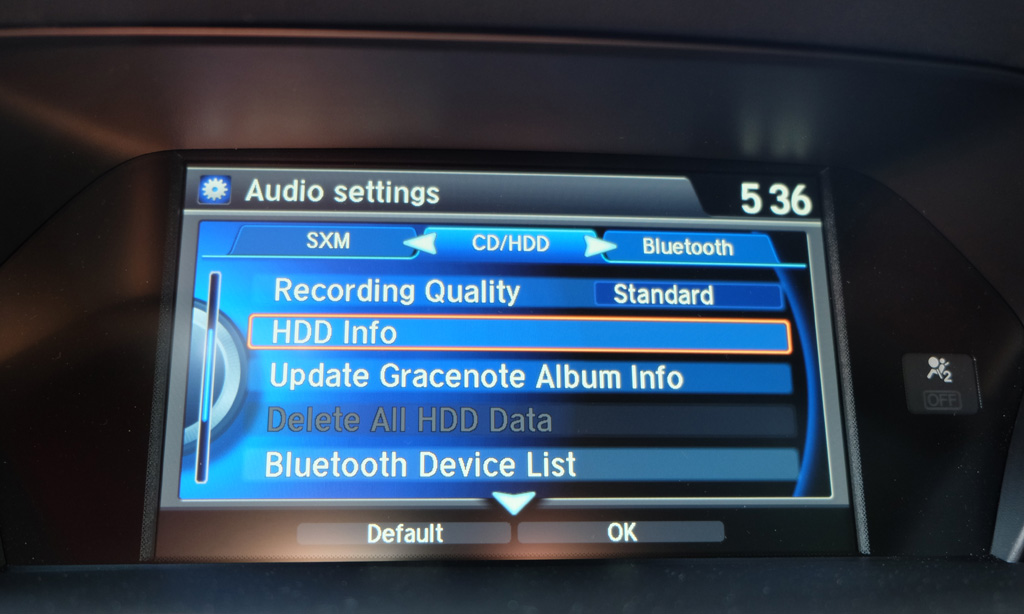 Unlike many other infotainment systems, AcuraLink uses two displays on the dash. The larger 7-inch display is contextual, showing things like navigation, menus and music metadata. A smaller display called the On Demand Multi-Use Display (ODMD) is the primary control method, taking what would’ve been 30 buttons in the past and narrowing them down to just nine.

Underneath the smaller display is a rotary wheel for tactile input, and works very similarly to the one Audi has. Since it’s a touchscreen, however, the input method isn’t linear, allowing you to go back and forth between the wheel and touch whenever you please.

Inputs are pretty standard. There is a USB port and Aux-In in the centre console, and Bluetooth is built-in. Siri is the only third-party voice activation platform that works, though there is a standard embedded one that also functions in parallel with the system for basic tasks. As is the case with other vehicles that have integrated Siri, a long press of the voice button on the steering wheel controls triggers the familiar ping to issue a command.

The AcuraLink app for iOS and Android is designed to be a remote tool for some of the car’s base functions. Despite the app’s primary features really only coming into play with the Connect and Premium packages, the fact that Acura is offering the whole lot for the first three years makes it relevant for anyone buying a new vehicle.

Looks can be deceiving though, if only because the visual splendour of two screens and flashy controls belies the company’s cautious approach. This isn’t an assessment on my part, but rather the message Acura executives relayed to me when I first stepped into the ILX. It explains why certain things are missing, but doesn’t necessarily excuse their omission. 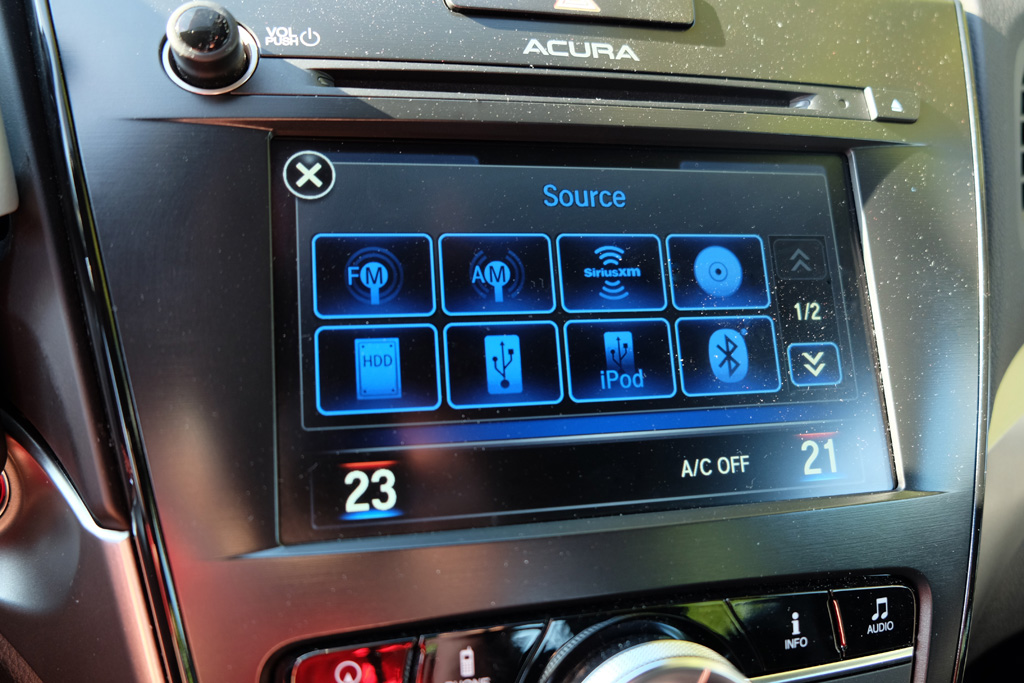 If there’s one thing car manufacturers have gotten right in the last few years, it’s the Bluetooth pairing process. While adding NFC would simplify this even more by cutting down the overall steps, at least it’s not hard for the average driver to get started.

Making calls and streaming music is easy enough — even more so if you start a playlist before driving off. Siri Eyes Free handles calling with aplomb, just as it would outside of the vehicle. The only oddity in doing so is the delay with which it springs to life after long pressing the voice button. This was also consistent, regardless of what I needed Siri to do, and was easily a few seconds longer than I’ve noted in other infotainment systems utilizing Siri Eyes Free.

While Siri has its limitations, and can be frustrating to use when behind the wheel, it still feels convenient to have. Quick responses to incoming texts are great, as is asking it to play songs from a particular artist. The challenge with this kind of integration is always consistency, and not just because it’s a safety issue, but also because a driver’s fuse is likely to be shorter when a feature like this doesn’t work. Of course, I can only speak for myself in that respect, but I’m inclined to think that it’s true of others as well.

Acura’s “cautious approach” has a number of caveats when it comes to the integrative side of this system. There is no support for any Android-based voice recognition platform, so it was a complete no-go with Samsung’s S Voice and Google Now. Windows Phone’s Cortana was also muzzled.

BlackBerry Assistant, however, was not. As I noted with BMW’s ConnectedDrive system, BlackBerry’s speech recognition platform isn’t officially supported, but works remarkably well. Performance isn’t quite on the same level with AcuraLink, but the fact it worked for me was a surprise. 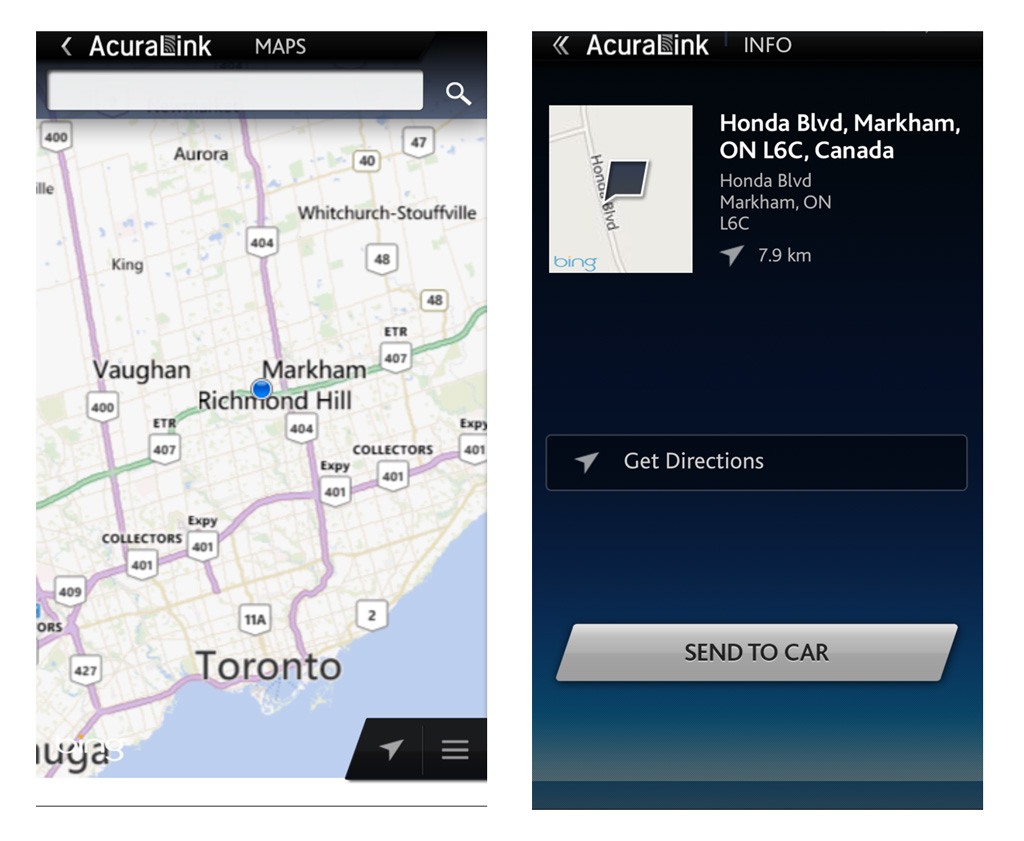 Then there are the apps. Or rather, lack thereof. Aha Radio is the only third-party app integrated into the system, working in tandem with the iPhone or Android app. Even by the sparse standards of app integration for in-car infotainment systems, this does feel like a waste. Sure, Aha has some good content, but the fact other popular apps like TuneIn, Spotify or Rdio aren’t included seems unusual. The very idea of integrating apps, especially music and audio ones, is to make controlling them safer by using dash and steering wheel controls.

I could play, pause and skip tracks on whatever streaming music app I was using, but I couldn’t select or navigate through songs and playlists without grabbing my phone. And even when I wanted to use the smaller dash screen or steering wheel to navigate through tracks, the latency was noticeable. It was better when the phone was plugged in via USB or Aux-In, but still not as quick as I’ve experienced in other cars.

As for navigation, Acura uses Nokia’s HERE Maps, which reportedly updates its points-of-interest (POIs), though the company couldn’t tell me how often those changes roll out. The map is pretty good, even if the visuals didn’t appeal to me, personally, and the mobile integration that works with it is pretty neat, too. 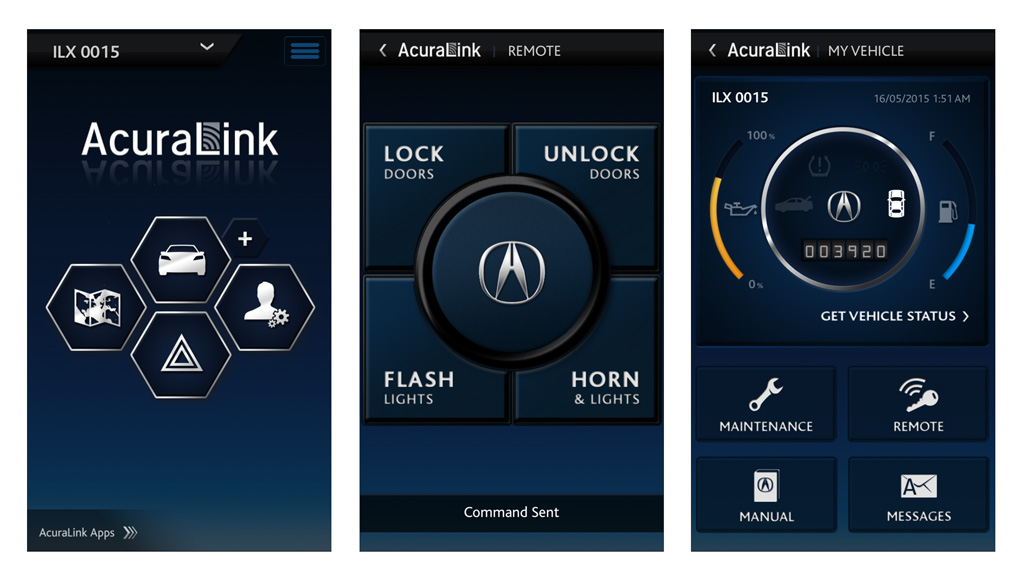 One of the key features of the AcuraLink Connect app is the ability to search a destination and then send the route information to the car before even getting in to drive off. I tried this several times, and found it to be a neat feature. Built-in traffic information does help avoid some gridlock and road hazards, but it’s not especially competent in its implementation here. Despite that, I preferred to do it this way because it was easier than having to go through the convoluted menu on the dash itself, or try my hand with voice recognition.

Since I had the Premium package, I could call Acura’s live concierge service to have them do the work and send the routing data to my car directly. I did on one occasion, just to try it out, and only because I was actually on the road and couldn’t use the phone or the dash menu. Like most infotainment systems, you can’t seek out a destination while the car is moving, making that a handy feature.

The car also had an onboard SIM, and one apparently designed by Acura to ensure reliable connectivity and integration. I was told that it operates on cellular networks, but not which ones and at what speed. It’s not a hotspot, so I couldn’t connect to it and run a speed test, though I suspect that it’s no faster than 3G.

AcuraLink Connect can do other things like lock or unlock the doors, honk the horn, sound the alarm, flash four-ways and check fuel levels and diagnostics by connecting with the car via the cloud. The process is impressive, yet fraught with the lack of an immediate payoff. Standing next to the car with a full five bars on my phone, I tried all of the features noted above, and in some cases, it took 45 seconds to register. Acura wouldn’t say what the connection speeds are supposed to be, but from my experience, I would be very surprised if there was LTE on board. 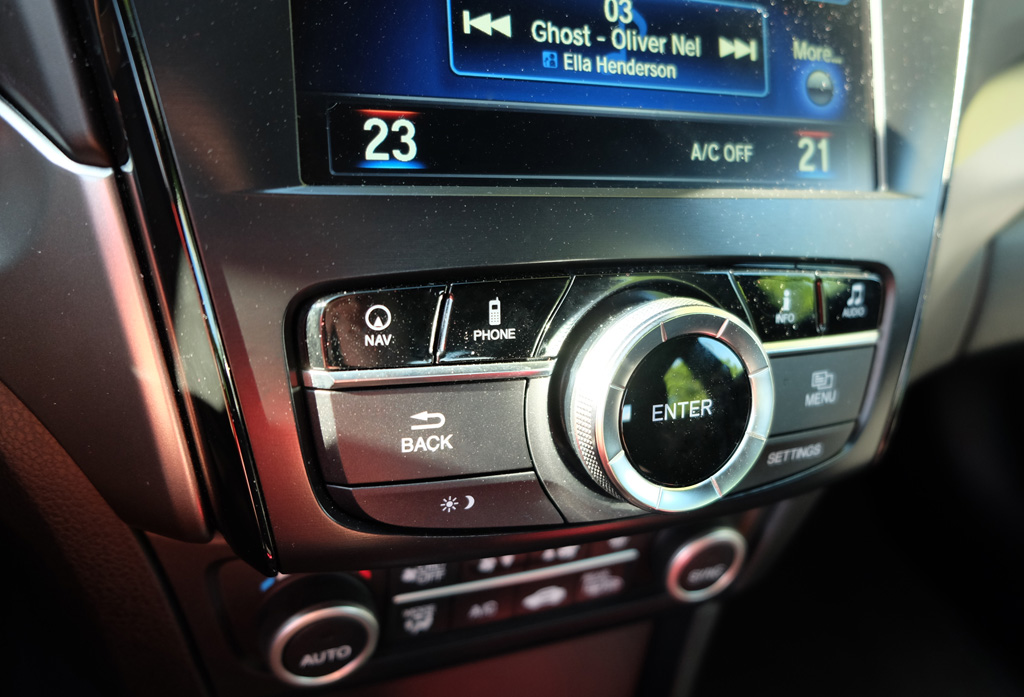 I openly admit that the bar, for me at least, is low when it comes to infotainment systems. This isn’t to say that I indicted AcuraLink from the start, only that I was prepared to be impressed with something that didn’t hit it out of the park. Unfortunately, that’s not the case here.

When viewed as the sum of its parts, AcuraLink disappoints, despite some of those parts being promising. Siri is nice to have if you’re an iPhone user, and navigation via the HERE Maps is also good, except the lack of app integration, spotty connectivity and deeper Android support cuts gaping holes into the whole thing. The fact the system flirts with obsolescence doesn’t surprise me because it’s an industry-wide problem, but it likely wouldn’t have hurt Acura to not be so cautious.