TELUS has a ‘urine-activated experiential installation’

World Cup fever is well on its way. Many Canadians will be heading to the local bar to cheer on their team and TELUS has unzipped a new campaign that gives you the power. TELUS has outfitted a number of mens washrooms in Toronto with a “urine-activated experiential installation that promotes the reliability of the TELUS 4G LTE mobile network.”

Here’s the deal. Several urinals have a connected digital display that works in harmony with your stream. The goal is to use what you’re giving away and shoot the soccer ball left or right past the panda goalie and into the net. The more goals you score the better, so if you’re looking to win it’s probably best not to break the seal too early. TELUS also has added a social aspect to this as they are “encouraging players to challenge friends back at the bar to try to beat their goal count.”

TELUS also considered implementing something for women, but “physics and a different kind of bathroom etiquette determined that such an initiative would be problematic.”

“The World Cup is known for mobilizing sports fans around the world and we’re excited to capitalize on that excitement with a unique gaming experience for male soccer fans in Toronto,” says Lara Johnson, Director of Marketing, TELUS. “At TELUS, we’re always looking for fun and new ways to connect with our customers – even in the restroom!” 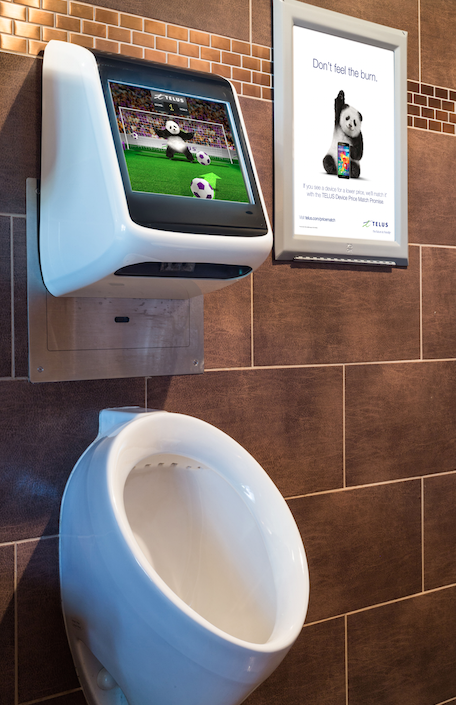