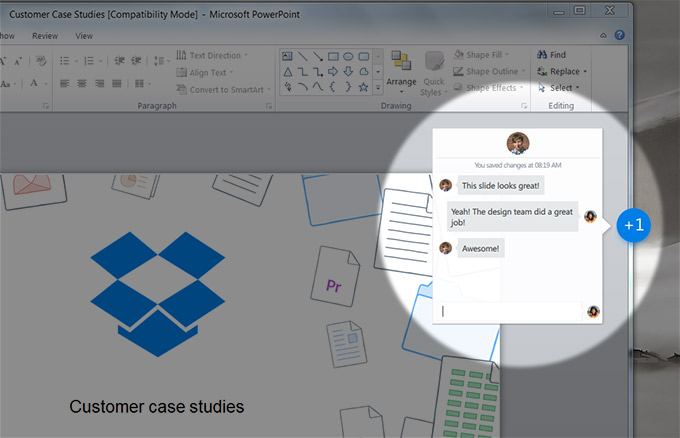 Dropbox quickly became a staple for small businesses looking for a cheap (i.e. free) way to easily share files between coworkers, despite predominantly being more of a prosumer application than a true enterprise app. With the flurry of announcements today, Dropbox is hoping to establish the service’s enterprise bonafides as it surpasses 275 million global users.

First up is the public release of DropBox for Business, a product that the company has been testing in private beta for awhile now. Users can now connect their personal Dropbox accounts to a Dropbox for Business account and access both from any device, saving the need to log in and out when jumping between business and personal data. Dropbox for Business also provides IT admins more control over corporate data, allowing for remote data wipes, account transfers, and sharing audit logs to track data access.

Dropbox also revealed its “Project Harmony” initiative today, a set of collaboration tools for users while editing documents in the Microsoft Office suite of applications. During a press event, the company demonstrated multiple users sharing the same Powerpoint document and making tweaks in real-time, which, similar to Google Drive collaboration, eliminates the need to pass back and forth multiple versions of a document while group editing. Impressively, “Project Harmony”’s collaboration features will work together across operating systems, as well as different versions of Microsoft Office and Dropbox.

Dropbox indicated that “Project Harmony” is built to work with any application, so expect more partnership announcements to come, possibly as soon as Friday, when the company will post more information on its corporate blog and is expected to be available “later this year.”