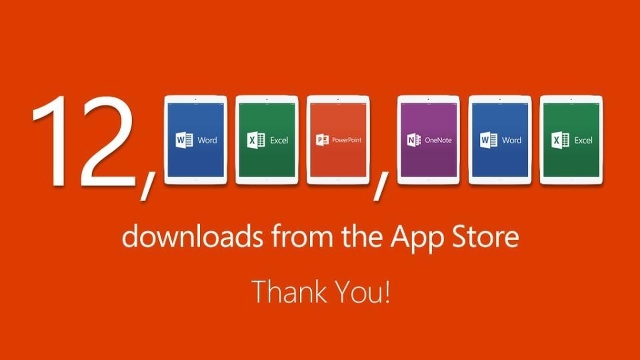 Well, that was fast. Just one week after launching its Office suite of apps for the iPad, Microsoft announced via a tweet yesterday that they have already surpassed 12 million downloads. This number also includes legacy OneNote downloads, and Microsoft didn’t provide numbers on each app’s contribution to the overall total, but the achievement is still very impressive.

Office for iPad is notable in that Microsoft completely rebuilt the apps from the ground up for the iPad rather than porting from Windows. Each app also contains iPad-specific features, as well as cross-platform file fidelity. Taking advantage of these features requires a $99/year Office 365 subscription, however, as only reading and presentation support are offered in the free version.

Have you downloaded Office for iPad? Are you willing to purchase an Office 365 subscription to take full advantage of the app suite? What do you think of the iPad specific features?