Dropbox announces its “next chapter” in mobile with Carousel, brings Mailbox to Android 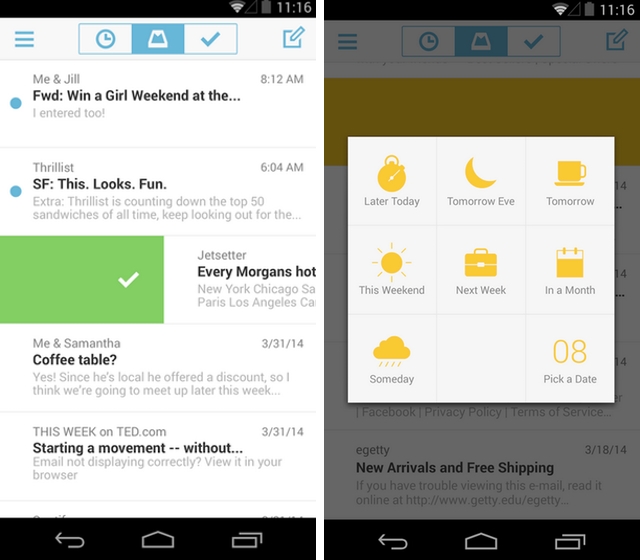 Dropbox held an event today to announce a couple of consumer-facing products aimed at creating “the next chapter” in the company’s mobile future.

In addition to an expansion of Dropbox for Business and a collaboration with Microsoft Office called “Project Harmony,” the company is launching a photo-sharing app for iOS and Android called Carousel, and a version of its Mailbox app for Android.

To understand the former, you have to go back to Dropbox’s push for automatic photo sync. The company understands that nearly every one of its 275 million customers has uploaded at least one photo to the service, be it through a synchronized desktop folder or automatically via an iOS or Android background process. Carousel attempts to find “a single home for all your life’s memories.”

Carousel purports to be a gallery of all one’s photos and videos, both locally-stored and inside Dropbox, sorting them by event or category. Available for both Android and iOS, the app takes over the background upload functionality from Dropbox’s proper app (if both are installed), allowing users to strike up private conversations with people with whom you share media. If you take a number of photos with friends at the same event, Carousel can store them in one place.

Mailbox, which was an iOS exclusive until today and purchased by Dropbox in March, 2013, brings its intelligent snoozing and sorting email prowess to Android. The app, which currently supports Gmail and iCloud, is a gesture-friendly mail client that encourages users to swipe horizontally in either direction to perform certain actions. Like Gmail for Android, it’s easy to archive or delete conversations, but Mailbox takes it further by offering to snooze and come back to the email at a later date.

Dropbox has augmented the gesture system, both on iOS and Android, with a new feature called Auto-swipe, which uses filters and machine learning to approximate the action you wish to take with a specific email or sender. For example, if you get a newsletter that you never read upon receiving but mean to come back to it, Mailbox can learn to assign a category — To Read Later — with no user input.

Mailbox also uses Dropbox’s backend infrastructure to synchronize settings and accounts, along with Auto-swipe patterns, between devices, so if you use Mailbox on Android and iPad you won’t have to re-enter those filters.