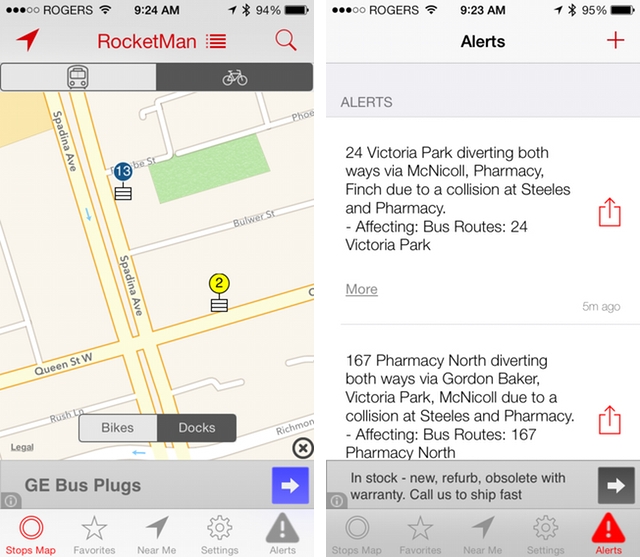 Rocketman has consistently been one of the best transit apps on iOS (and more recently, Android and BlackBerry 10), with support for a good chunk of the bigger Canadian and US cities. Not only does it support subway, streetcar and bus times but in certain cities (like Toronto, Ottawa and Montreal) it shows bike sharing locations and the number of bikes available to use.

The category is full of great apps, including Transit App and Moovit, but since the apps iOS 7-focused redesign in  October, it has grown considerably more useful. Version 4.3, available today, adds support for Montreal’s extensive transit infrastructure, and adds French language support in addition to traditional and Mandarin Chinese.

It also offers a redesigned Alerts screen, with support for more than one transit system, to convey messages straight from the source. Of course, the app still supports selecting favourite transit stops, and have the app ping you 5 or 10 minutes before the next bus or streetcar. It’s an invaluable resource to anyone roughing this seemingly endless Canadian winter.

Google launches tools to streamline public transit, not in Canada yet