From Russia, with leak: Nexus 5 shows up in clearest images yet

Google’s collaboration with LG may bear fruit yet again today, as the Nexus 5 is rumoured to launch without the same fanfare as previous years. One needs only look at the increased frequency, and quality, of leaks in recent days to confirm its imminent announcement.

The latest set of photos come from Russian social network, VK, and show the Nexus 5 in its fingerprint-happy matte black finish. The device appears to be similar in size to the Nexus 4, with smaller bezels that offset the larger screen size, and a lack of glass to ensure a more sturdy chassis.

Other than that, the phone appears to be about as nondescript as an Android device can be, with a pronounced but unremarkable 8MP camera on the back (though OIS is rumoured), a Nexus logo written vertically along the back, and that aforementioned rubbery matte finish that should protect the phone better against knocks and falls. 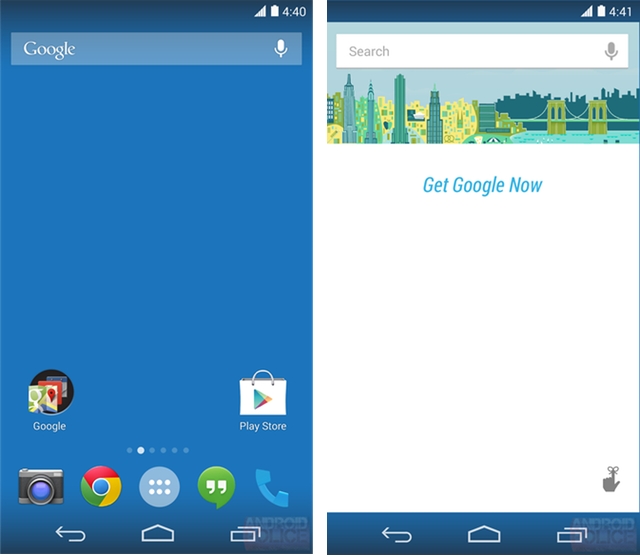 More interesting is the rash of Android 4.4-related leaks we’re seen recently, including an overhauled launcher dubbed Google Experience. Android Police posits its new name is to distinguish it from the previous version in lieu of making it available for everyone on Google Play. We’ve seen Google do this with previous system-only apps like Gmail, Calendar, Maps, Google Keyboard and many more, and it would make sense for the next step to be a launcher replacement. Google Experience is also expected to make the notification and app drawers transparent, and bring a permanent Google Now tab to the left-most window pane.

A new monochrome colour scheme is also expected, with white text in the notification area where blue has until now been the norm. Finally, Google Hangouts is rumoured to replace the stock Messaging app, combining data- and SMS-based messaging into a single, cross-device experience. The company is already readying this by forcing developers to adhere to a new stricter API, as KitKat will have the option of picking a default SMS app in the Settings. This will prevent users from downloading a third-party SMS app only to receive two notifications for each incoming message.