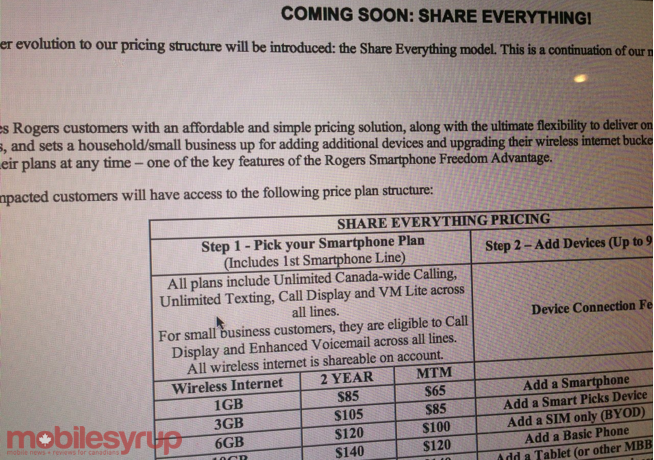 Update: As expected, Rogers has officially launched the “Share Everything” pricing model today. In a press release the noted that “wireless data consumption has increased by 80 per cent year over year” and that “Canadians are looking for ways to more easily manage and share data with friends and family across different devices.” The ‘Share Everything’ plan details are listed below, but there’s a couple more notable inclusions – namely the 1GB option has a bonus 1GB data and the 3GB option has a 3GB bonus. In addition, any data overage will be charged at $15/GB.

Rogers will be launching a new “Share Everything model” on September 10th. This, according to the internal doc we received, is a ‘continuation’ of the recently introduced 2-year contract terms. The “Share Everything” option allows Rogers customers to share internet usage (also known as data) on a total of 10 devices (smartphones and tablets). Rogers states that this brings “ultimate flexibility to deliver on everyone’s needs.”

As expected, the price of the monthly plan for the first device is the same as before and includes various allotments of internet. In addition, Rogers seems to be coming out with a new 15GB $160/month plan (2-year contract). However, there’s also a ‘Device Connection Fee’ that ranges from $10 – $55/month depending what device you have and how you sign up.

Finally, Rogers notes that “Effective September 9 at midnight, all Talk & Text Family/SmartTeam Plans will be expired. Customers currently on these plans can maintain their current plans; they will not be forced to migrate.”

Check it out the details below… this structure will go into place on September 10th. 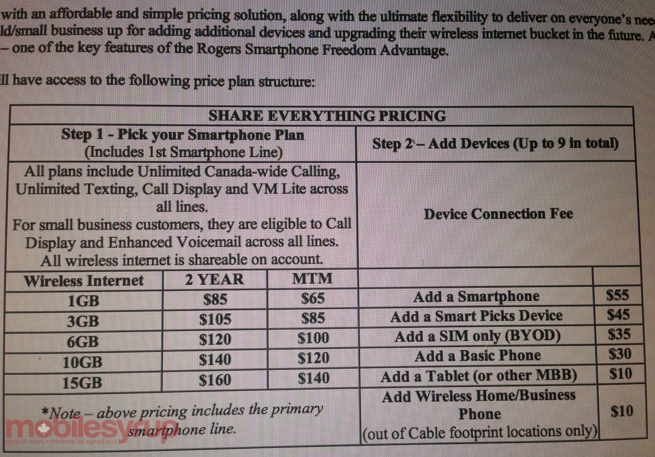